The nascent field of topological photonics1 aims to bring topological phenomena in condensed matter physics, such as the quantum Hall effect, into optical physics. In other words, our goal is to ‘protect photons’ from unwanted random scattering in their transport from one place to another in much the same way that electrons exhibit protected transport in solid-state topological insulators. The case is compelling: in the quantum Hall effect, electrons in a magnetic field are transported with such incredible robustness that the measured Hall conductivities are used in metrology. Indeed, as there are many digits of accuracy, these measurements can be used to define fundamental constants of nature, like Planck's constant and the electronic charge. For photons, such transport could enable more robust optical devices (waveguides, couplers, and so forth) and, thus, lower power operation. In addition, optics offers a flexibility that solid-state physics often does not in exploring new topological phenomena, such as quantum effects with entangled photons and non-equilibrium phenomena, among others.

The idea of quantum-Hall-type phenomena in optics came from Raghu and Haldane as well as the Soljačić group,2–4 and was first realized in the microwave frequency range using magneto-optic materials.5 However, due to the weak Faraday effect in the optical regime, realizing topological protection for optical devices requires new tricks.6, 7 Our approach uses an array of evanescently coupled helical waveguides arranged in a honeycomb lattice: see Figure 1.6 The lattice serves to enable Dirac points (a precursor to topological effects), while the helicity of the waveguides breaks the degeneracy between clockwise and counterclockwise diffraction around the array. Light confined to the edges of this structure moves unidirectionally, staying confined to the edge, and is not scattered by any form of defect or disorder along the edge. Another idea was also demonstrated, reporting protected edge states in silicon photonics.7

Figure 1. Floquet topological insulator. (a) Honeycomb lattice of helical waveguides with a ‘defect’ in the form of a missing waveguide on the edge. (b) Microscope image of waveguide array input facet. (c) Experimental results showing light input on the top-right waveguide traveling past the defect without backscattering along the edge.

In our work, we aim to explore topological phenomena in optics, and to use optical settings as a platform to discover conceptually new topological effects that would also impact areas beyond optics. These efforts led us to discover several new phenomena, among them the prediction of gap solitons in the topological bandgap, and the observation of a topological transition using a non-Hermitian system.

Optical spatial solitons are optical beams that use the ambient nonlinear refractive index of a medium to suppress diffraction and self-guide. Previous work predicted and observed a myriad of solitons of different character.8 We predicted a new mechanism for the formation of gap solitons in the topological bandgap of such a system: see Figure 2(a).9 In this scenario, the optical beam nonlinearly induces a potential well in the bulk of the lattice where topological solitons live. Since the nonlinear response of the medium mediates interactions between photons, this answers a common question about photonic topological insulators: what happens in the case of photon-photon interactions? 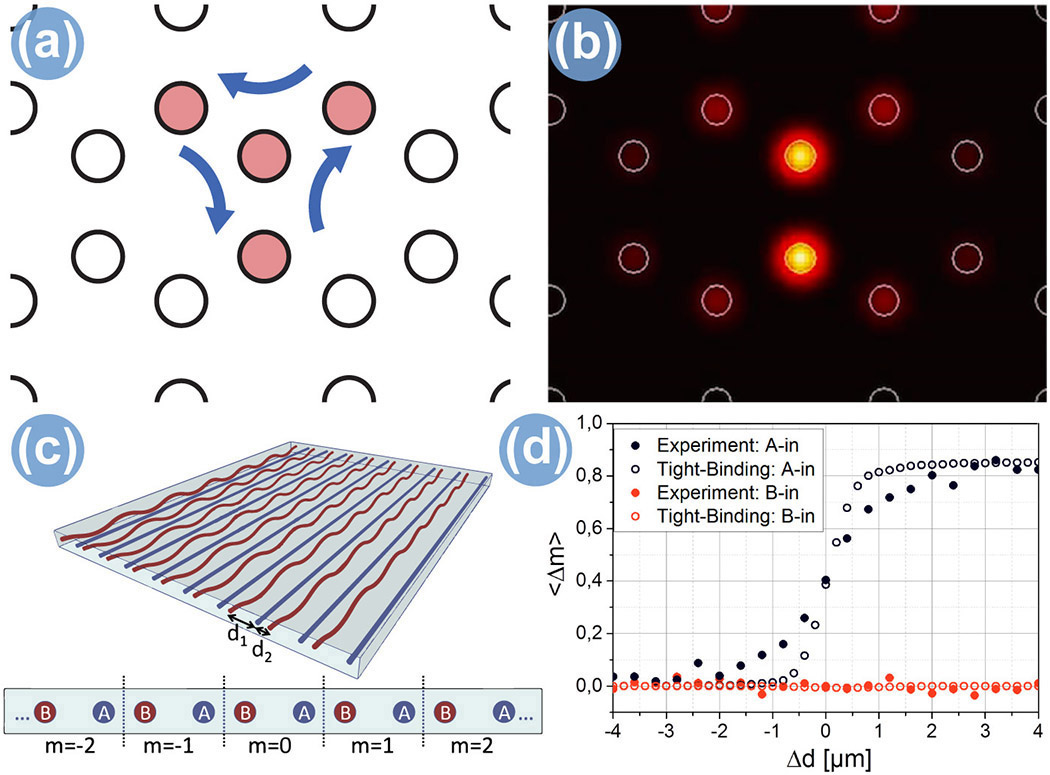 Figure 2. Topological soliton shown (a) schematically and (b) in a beam-propagation simulation. (c) Schematic diagram for a setup demonstrating a topological transition in a dimer waveguide array lattice. Here d1and d2 indicate the distances between dimer sublattices. (d) The transition as a function of dimerization, showing results for experimental and tight-binding. Here Δm is the mean displacement of the wavepacket, A-input and B-input indicate where sublattice light is injected, and Δd=(d1- d2)/2.

Another ever-present effect in optics is non-Hermiticity (i.e., gain and loss). In recent work, we showed that a topological transition can be observed in a one-dimensional dimer array of waveguides: see Figure 2(c) and (d).10 In these systems, previous research showed that the mean displacement of a ‘quantum walker’ would be proportional to a quantized topological number only depending on the direction of dimerization.11 We experimentally demonstrated this effect and obtained excellent agreement between theory and simulations. Note that this type of topological quantization of transport is facilitated only in non-Hermitian systems. It is an effect that is directly enabled by optical systems, but can be observed in other systems where gain or loss are present.

Our work shows that the physics of photonic topological states is extremely rich and brings about new phenomena across the fields of optics. Further, the discoveries made in optics are conceptual, with direct implications in many other areas ranging from cold atoms to solid-state electronic systems. This, combined with the possibility of dramatically increasing optical device performance and limiting power consumption, means topological photonics promises to be a rich field of study for years to come. Future work in our collaboration involves probing the nonlinear (interaction) effects of topological systems, the observation of topological pumping and Bloch oscillations in photonic topological insulators, and further applications and implementations of one-way waveguiding in such systems.