Using femtosecond (fs) lasers to generate subsurface structures in transparent materials has led to a variety of applications. Among them, the production of photonic and microfluidic components has been particularly successful.1 Direct laser writing of subsurface structures2 is based on the use of an ultrafast laser beam that is focused underneath the surface. The multiphoton and impact ionization that occurs in the focal region as a result of this interaction leads to material modification: see Figure 1. Provided that a sufficiently large refractive index contrast (Δn) is induced in the transformed region, light-guiding elements with a 2D or 3D configuration can be fabricated using this technique. 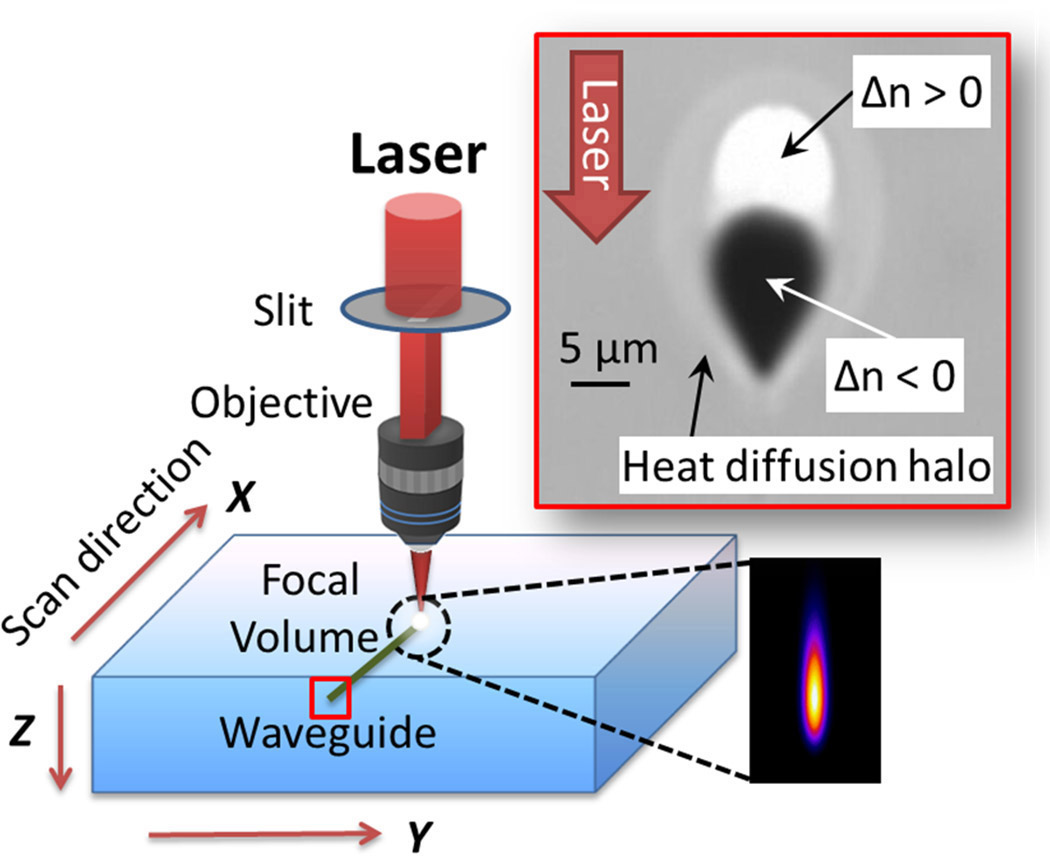 Figure 1. Scheme of the experimental setup for waveguide writing. The femtosecond laser beam, shaped with a slit, is focused underneath the surface. The zoomed-in inset shows the linear intensity profile. The laser induces multiphoton and impact ionization in the focal region, leading to material modification. By moving the sample transversely with respect to the laser beam, it is possible to generate light-guiding structures like the one shown as a cross section. In this case, high and depressed refractive-index-contrast (Δn) regions are caused by the enrichment or depletion of lanthanum.

In spite of its success, the approach is currently limited by the Δn values achievable (generally below 10−2) via the typical modification mechanisms (e.g., lattice densification/expansion, point defects, and photochemical modifications).3 Inducing local changes in the composition of glass represents a powerful alternative mechanism with the potential to yield a very large refractive-index contrast.4 If this mechanism could be exploited and controlled, it would enable the development of highly efficient photonic elements by direct laser writing. Other applications, like local hardening—based on local modification of the glass composition—could also be made possible.

The production of compositional changes via the subsurface fs-laser irradiation of dielectrics has been studied for more than 10 years.4–6 We have recently demonstrated that this technique can also be used to produce highly efficient guiding structures with very large index contrasts.7, 8 Our approach is based on tailoring glass by adding specific chemical constituents to its base composition. Under certain conditions, it is possible to enrich a refractive-index-carrying element in a local region of the material, thereby enabling the formation of highly efficient passive7,8 and active9–11 waveguides: see Figure 1.

We have applied this approach to phosphorus-pentoxide-based glasses using aluminum oxide, potassium oxide (K2O), and lanthanum oxide (La2O3) glass modifiers. The combination of non-linear absorption and heat accumulation effects that occur during the irradiation process leads to cross-migration of the lanthanum and potassium ions. An enrichment of La2O3 is responsible for increasing the local refractive index to values of up to 1.5×10−2. The same effect has also been demonstrated in a tellurite glass, in which the refractive carrying element was tellurium and the cross-migrating element was sodium.12

The refractive-index map of a single-mode waveguide and the corresponding spatial distribution of La2O3 and K2O is shown in Figure 2. A large increase in the refractive index occurs as a consequence of the enrichment of La2O3 (accompanied by the cross-diffusion of K2O).7 The local refractive index scales linearly with the local content of La2O3.7, 8

Figure 2. (a) Near-field refractive index map of a guiding structure. (b) Compositional map, obtained by energy-dispersive x-ray spectrometry, indicating the spatial distribution of lanthanum (La, red) and potassium (K, turquoise) in the cross section of the waveguide. There is a direct correlation between local lanthanum content and the refractive index. (c) Near-field image of the propagated mode in the waveguide written by fs-laser-induced ion migration. The structure was written with a 1030nm, 500kHz, 450fs laser beam. The beam was shaped with a 1.4mm slit, and focused 100μm underneath the surface with a 0.68NA microscope objective. The sample scan speed was 60μm/s.

Because the size of the La2O3-enriched region is determined by the width of the slit used during the writing process, the waveguides produced by this mechanism are highly controllable.8 The slit enlarges the focal volume in the dimension orthogonal to the split aperture, leading to the pulse energy being distributed over a larger volume. As a consequence of this, the region that non-linearly absorbs the laser energy is reduced, resulting in a modified region of smaller size (thresholding effect). Because the local La2O3 content (and thus Δn) depends on the pulse energy used—see Figure 3—single-mode waveguides can be produced with coupling and propagation losses as low as 0.1dB/facet and 0.2dB/cm, respectively, at 1534nm.7 This makes the technique ideal for developing optical amplifiers and lasers. We have already demonstrated an optical amplifier with internal gain of 5.2dB/cm−1,9 and waveguide lasers with pump thresholds of around 50mW and slope efficiencies of above 20% in erbium-ytterbium co-doped glasses.11 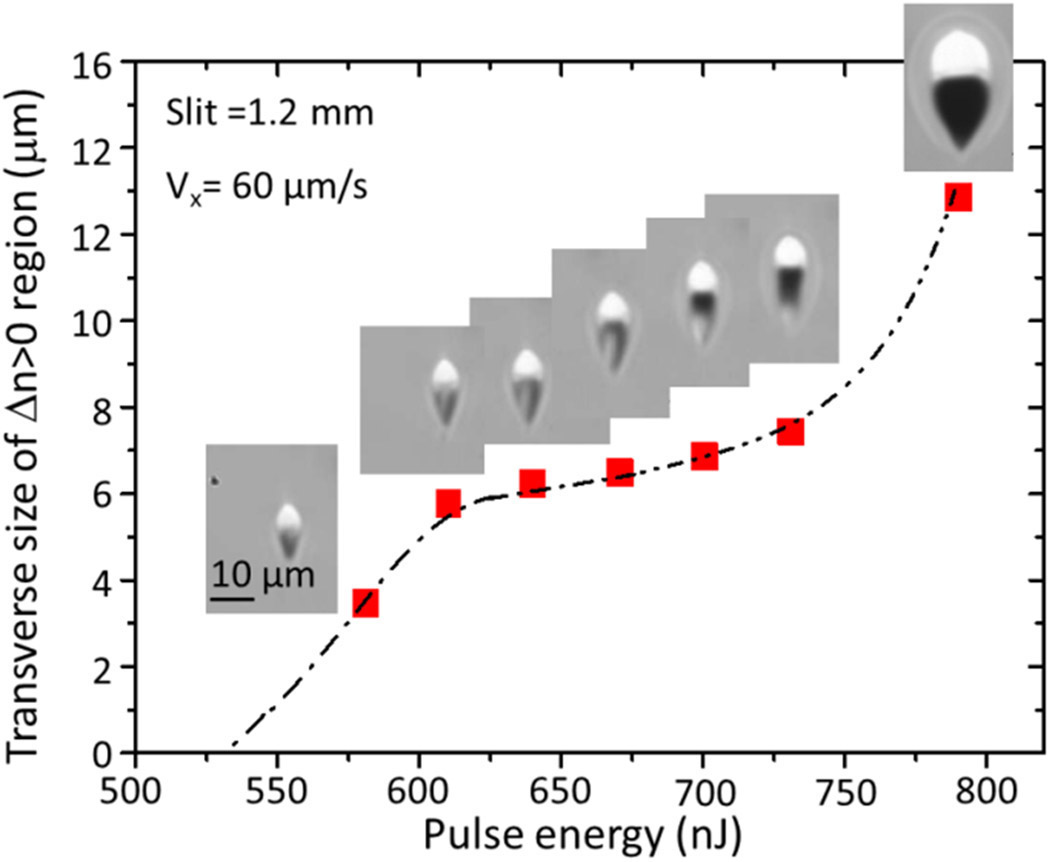 We have found that lanthanides (e.g., lanthanum, erbium, ytterbium) and alkaline (e.g., potassium, sodium) glass modifiers strongly diffuse in opposite directions, while other elements (e.g., phosphorous and aluminum) show smaller compositional changes or remain nearly static, depending on the irradiation conditions.8, 10 However, the migration of erbium and ytterbium has to be carefully considered when designing active elements.10, 11 We have also seen that the preferential direction for ion migration is correlated to the laser-induced plasma axis—see Figure 4—which depends on, among other parameters, the spherical aberration of the propagating beam.13 This enables control over the ion migration direction and thus the shaping of the refractive-index cross section of written structures.14 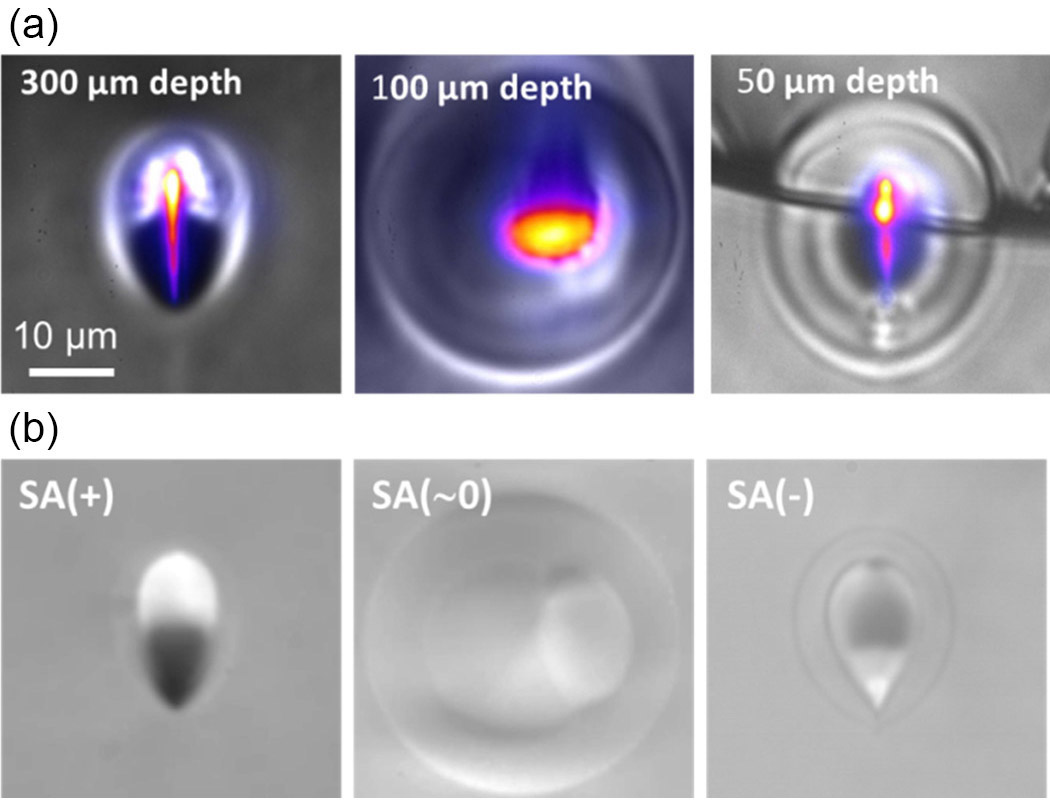 Figure 4. (a) In situ plasma emission images overlapped with transillumination images of the laser-modified region during laser writing at different depths inside the sample, corresponding to the varying spherical aberration (SA: positive; ∼0; and negative, respectively) experienced by the incident laser beam. (b) Differential-interference-contrast micrographs of the same transilluminated structures after polishing. The white and dark contrasted regions show areas of lanthanum enrichment and depletion, respectively, featuring a clockwise rotation of the bright guiding region.

Our findings confirm the feasibility of designing optimal glass compositions for fs-laser writing via spatially selective modification of the material composition. Highly efficient waveguides, optical amplifiers, lasers, multicore-waveguide and antiresonant-reflecting-optical-waveguide structures, mode converters, photonic lanterns, and fan-out waveguides can potentially be fabricated using this direct laser-writing approach. We are currently performing detailed investigations regarding the mechanisms underlying the fs-laser-induced ion migration process and the detailed role of the glass composition. Using results from these studies, we intend to extend our approach to other glass families and to potential applications that rely on the local control of the glass composition.

Javier Solis is a research professor at the CSIC. His research interests include laser-matter interaction, laser processing, ultrafast laser applications, ultrafast spectroscopy, photonics, and nanotechnology. He has published more than 160 scientific papers on these topics.