The reduction of carbon dioxide (CO2) into energy-rich chemicals such as carbon monoxide (CO) and formic acid (HCOOH) is an important research subject in modern chemistry as scientists try to address the depletion of carbon resources and concomitant global warming. Photocatalytic reduction—with the use of visible light—of CO2 has recently attracted a high level of attention and a number of photocatalysts have so far been reported.1, 2 The development of photocatalytic CO2 reduction systems that are sufficiently active, stable, inexpensive, and effective under visible light, however, still remains a challenge.

Carbon nitride (CN) is a polymeric semiconductor and was originally reported in 1834.3 CN consists of two abundant elements on Earth and has a band gap of about 2.8eV. It is insoluble in acids and bases, as well as in various organic solvents. We have previously shown that CN exhibits photocatalytic activity for water reduction and oxidation,4, 5 but we have only recently reported a reliable system of photocatalytic CO2 reduction.

In our group we have thus focused on using CN as a component of a photocatalytic CO2 reduction system.6 The main challenge this involves is finding a way to suppress proton reduction, which should more readily (in terms of thermodynamics and kinetics) occur than CO2 reduction. In this work, we combined CN with a ruthenium (Ru) complex (see Figure 1), which is a well-known catalyst for CO2 reduction.7 We have, therefore, been able to produce a hybrid photocatalyst that operates under visible light with high CO2 reduction selectivity. 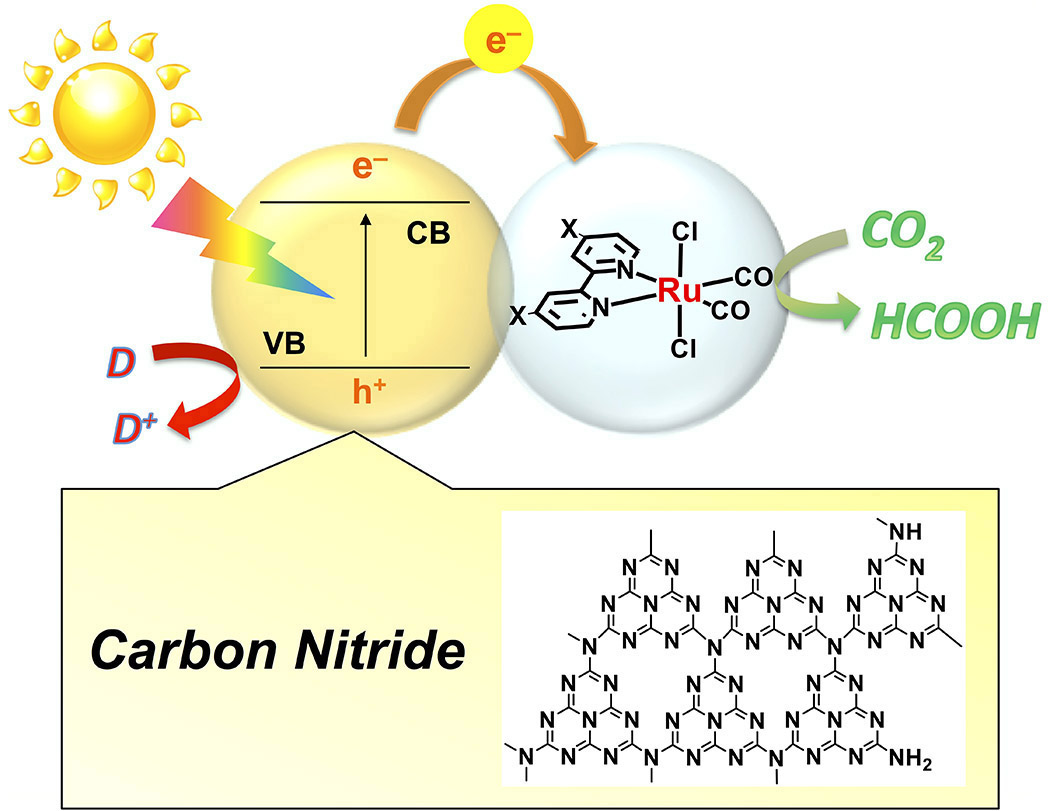 The hybrid photocatalyst that we developed is capable of converting CO2 into HCOOH with a selectivity of more than 80%. HCOOH is a transportable fuel that can then be readily decomposed into hydrogen (H2) and CO2 in the presence of a suitable catalyst.8 We conducted isotope tracer experiments with 13CO2 as well as some control experiments, the results of which support the reaction scheme shown in Figure 1. From these experiments, we made three main observations. First, CN undergoes photoexcitation upon visible light irradiation. Second, the conduction band electrons in CN transferred to the lowest unoccupied molecular orbital (LUMO) of the adsorbed ruthenium complexes, while the valence band holes were consumed by oxidation of an electron donor species. Lastly, we found that CO2 reduction occurred in the reduced ruthenium complexes. This is the first example of visible-light-responsive photocatalytic CO2 reduction with the use of CN.

So that we could maximize the performance of our system, we also conducted follow-up studies on our hybrid material. In these experiments, we focused on the textural properties of CN,9 the molecular structure of a catalytic ruthenium complex, and the effect of solvents on the photocatalytic CO2 reduction.10 By introducing mesoporosity into the graphitic CN structure, we were able to increase the specific surface area, which led to enhanced activity. Too much mesoporosity, however, resulted in shrinkage of the CN walls. This increased the density of defects and eventually contributed to an activity decrease.9

In our current version of the CO2 reduction scheme, the adsorbed ruthenium complex accepts electrons from the conduction band of CN (see Figure 1). The reduction potential (i.e., LUMO) of the ruthenium complex is, therefore, an important factor. Indeed, we found that by promoting the injection of electrons from CN into the ruthenium unit (by lowering the LUMO level of the ruthenium complex and by strengthening the electronic interactions between the two units) enhanced its activity.10 We were able to further optimize the reaction condition by using N, N-dimethylacetamide as the reactant solution and thereby enhancing the activity. In this particular case, we achieved a turnover number (TON) of 1061 and an apparent quantum yield (AQY) of 5.7% (at 400nm), while a selectivity of about 80% for HCOOH production was maintained. These numbers are the best that have so far been reported for visible-light-responsive heterogeneous photocatalysts for CO2 reduction.

We developed a new photocatalytic CO2 reduction system in which we use CN and a catalytic ruthenium complex. Our system can be operated under visible light irradiation. Our hybrid photocatalyst can be used to reduce CO2 into HCOOH, with a selectivity of about 80%, and it results in a high TON (more than 1000) and AQY. Our current system, however, relies on a strong electron donor (i.e., triethanolamine) for operation. This makes our overall scheme ‘sacrificial’ (i.e., the change in Gibbs energy is less than 0). In the next stages (currently underway) of our work, we will be using water as the electron source for CO2 reduction. This will be essential for us to achieve energy conversion-type CO2 reduction.

Ryo Kuriki obtained his BSc from the Tokyo Institute of Technology in 2014. He is currently a PhD student and is working on metal complex/semiconductor hybrid photocatalysts for visible light carbon dioxide reduction.

Kazuhiko Maeda received his PhD from the University of Tokyo in 2007, where he worked under the supervision of Kazunari Domen. He is currently an associate professor. His research interests include photocatalytic water splitting and carbon dioxide fixation using semiconductor particles. This work is based in the fields of nanotechnology and materials chemistry.