Technologically important semiconductors such as silicon (Si) and gallium arsenide (GaAs), which have bandgap energies (EG) of less than 2eV, absorb a significant portion of the solar spectrum. However, they also corrode or passivate when they are in contact with alkaline solutions or when they are operated as photoanodes in aqueous solutions. The use of these materials as photoanodes in fully integrated systems that convert solar energy to chemical fuels is therefore precluded.

Whether the target chemical fuel is hydrogen gas (produced by splitting water) or carbon-based fuels, such as alkanes and alcohols (produced from carbon dioxide and water), the reductive fuel-forming half-reactions must be paired with the oxygen-evolution half-reaction. This process liberates the electrons that are required for fuel formation, thereby completing the fuel cycle. The oxygen-evolution reaction (OER) causes most materials (except oxides) to corrode, either by dissolution or by formation of an insulating surface oxide. In addition, the OER is kinetically slow and requires the application of a significant overpotential (greater than 220mV for a current density of 20mA cm−2) beyond the standard potential (1.229V) that is need for the reaction. This is the case even when a state-of-the-art noble-metal catalyst is used.1

Various approaches have been pursued for the stabilization of small-bandgap semiconductors in aqueous electrolytes and at a positive potential.2–6 With these techniques, however, only limited efficiency and stability levels have been demonstrated. This is because these methods have unoptimized optical, electrical, chemical, and electrochemical properties and stabilities.

We have developed a surface coating for the stabilization of small-bandgap photoanodes, which provides excellent combined properties that are required for a coupled photo-electrical-chemical process.7 Our coating prevents physical contact between the semiconductor and the aqueous electrolyte. The ideal characteristics for this protective surface coating are collectively termed SABOR (see Figure 1), which stands for stability, activity, built-in asymmetry, optical modulation, and resistance. In our approach, we use reactive radio-frequency sputtering to deposit nickel oxide (NiOx) films directly onto cleaned semiconductor surfaces to remove native oxides. The resulting films are sensitive to the sputtering conditions, such as the substrate temperature, oxygen partial pressure, and deposition rate. The physical properties (e.g., crystallinity, morphology, and chemical composition) of our sputtered NiOx films depend on the deposition conditions, which also influence the optical transparency, electrochromism, electrical conductivity, and catalytic activity of the films.8–11 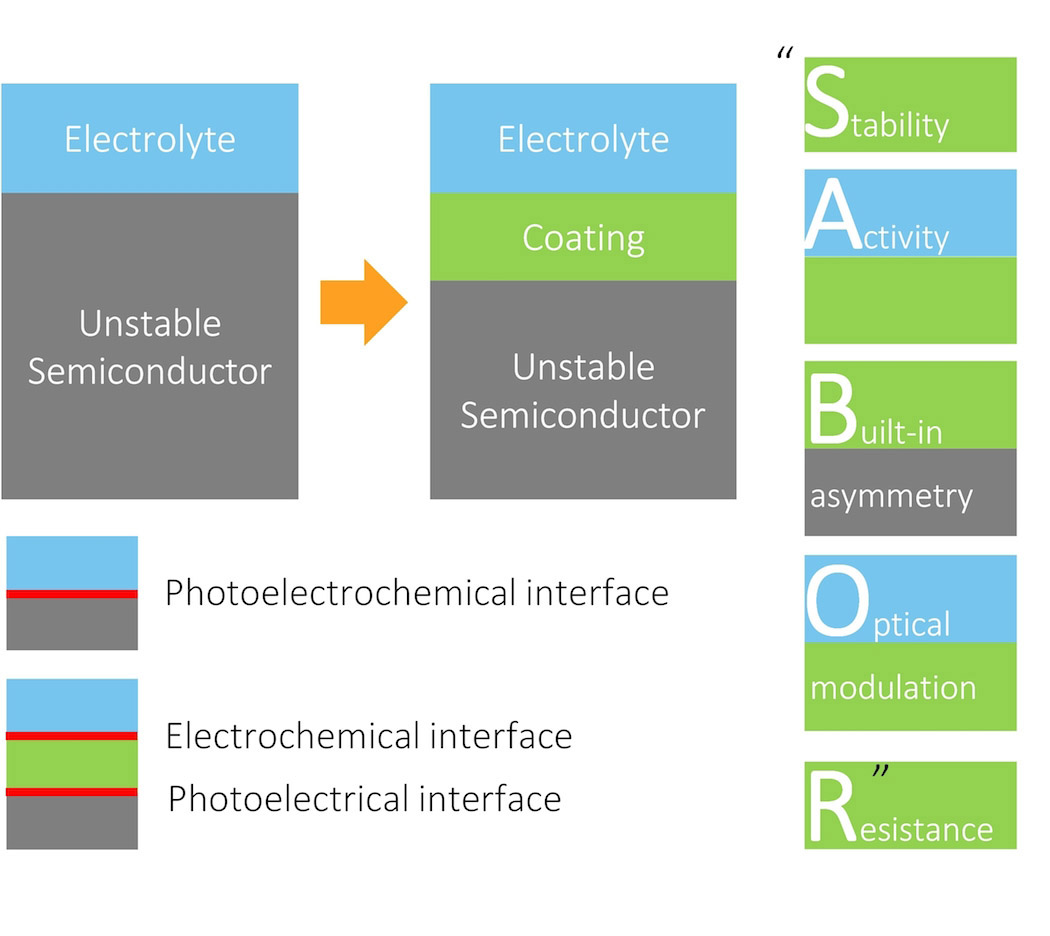 We conducted transmission electron microscopy, atomic force microscopy, and x-ray diffractometry measurements on our NiOx thin films. The morphology of a typical reactively sputtered NiOx thin film is shown in Figure 2(a). Our measurements revealed that the films generally have a columnar structure (in which the columns are aligned normal to the surface) with an equivalent grain size of 25nm.8–11 Those films that we synthesized at higher temperatures had higher levels of crystallinity than the films that were synthesized at lower deposition temperature: see Figure 2(b). Optical images of our NiOx films (with various thicknesses) that we deposited onto quartz substrates are shown in the inset of Figure 2(c). Our films are highly transparent, and they exhibit minimal absorption in the visible spectrum. As such, the films permit maximum absorption of the light by the underlying semiconductor. We measured the optical bandgap of the films as 3.74eV: see Figure 2(c). In addition, the refractive index of the NiOx was about 2.26 at 550nm. This is nearly the ideal value for an antireflective coating on covalent semiconductors that have refractive indices of about four.8, 11 We used the transfer-matrix method to find that the optimized film thickness for achieving antireflective behavior is 70–80nm. This thickness varies only slightly when there are changes to either the morphology or material of the underlying semiconductor. 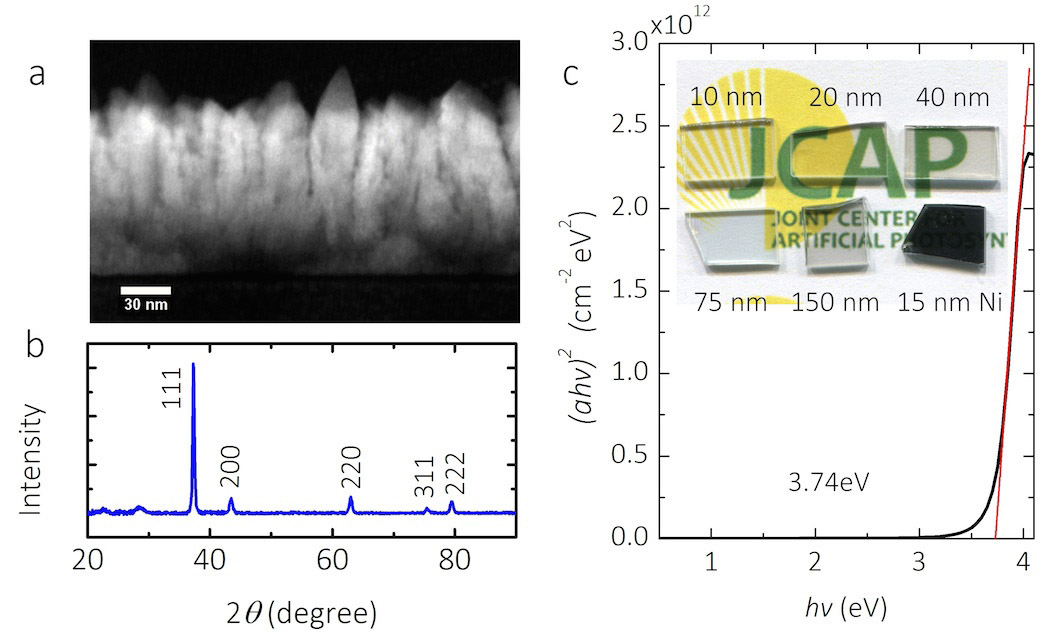 Figure 2. (a) Low-magnification, high angle annular dark field scanning transmission electron microscope cross-sectional image of a nickel oxide (NiOx) film. The bright part of the image is the polycrystalline NiOx layer, which has a columnar structure with vertical grain boundaries. The darker layer, at the bottom of the image, is the silicon (Si) wafer. (b) The x-ray diffraction pattern versus diffraction angle (θ) from the NiOx films deposited onto Si substrates. Numbers on the figure represent the Miller indices of the crystal plane. (c) A Tauc plot for the NiOxfilms. This plot is based on the absorption coefficient (α), which is calculated from the measured extinction coefficient (k), and the energy of the light (hv) measured using spectroscopic ellipsometry. The inset of (c) shows optical images of NiOxfilms with various thicknesses and a metallic nickel film (with a thickness of 15nm) on quartz substrates.8–10 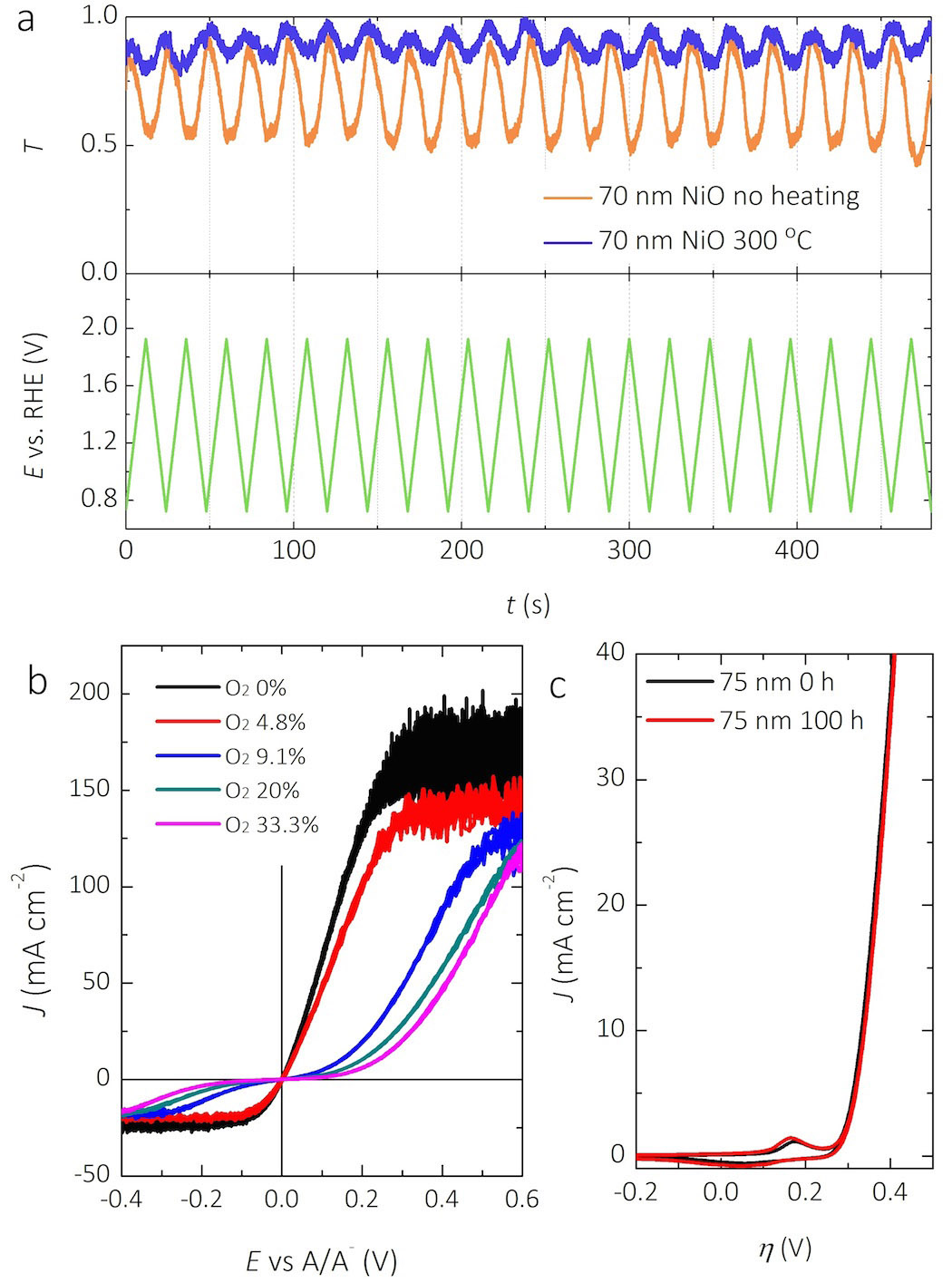 Figure 3. (a) In situ transmittance (T), at a wavelength of 550nm, of sputter-deposited NiOxfilms that were prepared with (blue curve) and without (orange curve) heating on fluorine-doped tin oxide glasses during cyclic voltammetric scans (green curve). E: Potential. RHE: Reversible hydrogen electrode. (b) The effect of oxygen (O2) concentration during sputter deposition on the conductivity of the NiOx films. A/A- : Solution redox potential. J: Current density. (c) Current density data for the electrocatalytic activity of the NiOx films (with thickness of 75nm) in a 1.0M potassium hydroxide aqueous solution, before (black) and after (red) running at a constant current density of 30mA cm-2 for 100 hours. η: Overpotential.8,11

We also found the conductivity of the NiOx films that were prepared with an oxygen concentration of less than 4.8% was comparable to the value of a nickel metal film. For these measurements—see Figure 3(b)—we evaluated the films when they were in contact with an aqueous solution that contained an electrochemically reversible one-electron redox couple of ferrocyanide, i.e., Fe(CN)64−/3− (aq). In addition, we conducted Mott-Schottky measurements to find the inverse of the differential capacitance as a function of applied potential. Our results indicated that the films behave intrinsically as p-type semiconductors, with a carrier concentration of about 1019cm−3.10 When we increased the oxygen concentration during deposition, the resistance losses were greater. Moreover, the electrocatalytic activity of NiOx films that are sputtered with an oxygen concentration of less than 4.8% was similar to the electrocatalytic activity we observed for hydroxide/oxyhydroxide. This hydroxide/oxyhydroxide was derived from the oxidation of nickel metal and required an overpotential of about 330mV to produce an anodic current density of 10mA cm−2 for water oxidation. The catalytic activity and electrocatalytically active surface area of our NiOx films were unchanged after 100 hours of continuous oxygen evolution at a constant current density of 30mA cm−2: see Figure 3(c).

We developed a new technique for the stabilization of small-bandgap photoanodes within aqueous electrolytes. Our approach combines optical transparency, electrical conductivity, chemical stability, corrosion protection, antireflectivity, and catalytic activity. As such, our NiOx thin films can be used as a promising protective coating on otherwise unstable semiconductors (e.g., amorphous silicon, crystalline silicon passivated by coatings such as amorphous silicon or cobalt oxide, crystalline cadmium telluride, or indium phosphide) for solar-driven water oxidation in near-neutral or strongly alkaline aqueous solutions. Our ongoing and future work will include the study of the optical properties of NiOx under working conditions. For this work, we will use in-situ ellipsometry and we will develop other techniques so that we can directly probe the passivation processes.

This work was supported through the Office of Science of the U.S. Department of Energy (DOE), under award DE-SC0004993 to the Joint Center for Artificial Photosynthesis, a DOE Energy Innovation Hub. This work was also supported by the Gordon and Betty Moore Foundation (award GBMF1225) and by the Air Force Office of Scientific Research through the Multidisciplinary University Research Initiative, under award FA9550-10-1-0572.

Ke Sun received his PhD in electrical and computer engineering from the University of California, San Diego in 2013. He is currently a postdoctoral fellow in the Lewis Research Group.

Fadl Saadi received his BS and MS from Stanford University and is currently a PhD candidate, in the field of materials science, in the Lewis Research Group.

Xinghao Zhou received his BS from the University of Science and Technology of China in 2013. He is currently studying materials science as a PhD candidate in the Lewis Research Group.

Nathan Lewis is currently the George L. Argyros Professor of Chemistry. He has been on the faculty at the California Institute of Technology since 1988 and has served as professor since 1991. He has also been the principal investigator of the Beckman Institute Molecular Materials Resource Center since 1992 and is the scientific director of JCAP.