Future large x-ray telescopes, such as the European ATHENA1 and the American X-ray Surveyor missions,2 will be characterized by very large effective areas and high angular resolutions. They will therefore require lightweight, high-performance optics. Materials that are lighter than nickel (as used for the X-ray Multi-Mirror mission) or thick Zerodur glass (as used in the Chandra X-ray Observatory) have to be considered, which makes silicon and glass suitable because of their low densities. Furthermore, in these future telescopes it will be necessary to integrate a very large number of glass mirror segments (more than 10,000), which must be capable of surviving the spacecraft launch. However, during the optics fabrication process, thin glass foils are thermally curved (i.e., so that they reach the correct shape to focus x-rays with the required tight angular resolution tolerances) and the strength of pristine glass is reduced slightly. As a result, in previous research conducted for the International X-ray Observatory telescope,3 we were able meet the requirement for a 99.00% probability that the whole mirror assembly would survive launch. We were unable, however, to meet the strict 99.99% probability requirement.3

To increase the telescope's chances of survival, we therefore considered enhancing the slumped glass strength by performing a chemical tempering process after slumping. We would then measure the effect of the tempering on glass roughness and shape to assess the possibility of using the glass for x-ray optics. For our research, we selected Corning Gorilla Glass, which is used primarily for covers of portable electronic devices because of its high damage resistance (demonstrating a compressive strength as high as 800MPa after chemical tempering).4 Specifically, we used the Gorilla Glass 2, with a thickness of 0.55mm (the thinnest configuration available when we performed the study).

At the Brera Astronomical Observatory, Italy, we have developed a new method for the preparation of glass for x-ray optics applications. In our slumped glass optics technology, we thermally form glass foils to have a cylindrical shape (see Figure 1). Then, using a bespoke integration machine,5 we impart a final Wolter-I configuration (a paraboloid followed by a hyperboloid section) to the foils. We stack and glue the foils with glass spacers (called ribs) that endow the structure with more stiffness, and freeze the Wolter-I profiles of the integration mold into the glasses. We are thus able to correct for residual low-frequency error profiles.6 Our integration process tolerates low-frequency deformations that can be induced by the tempering process, however, it is still necessary to accurately rule out mid-to-high frequency changes that can reduce the optical performance of the mirrors. 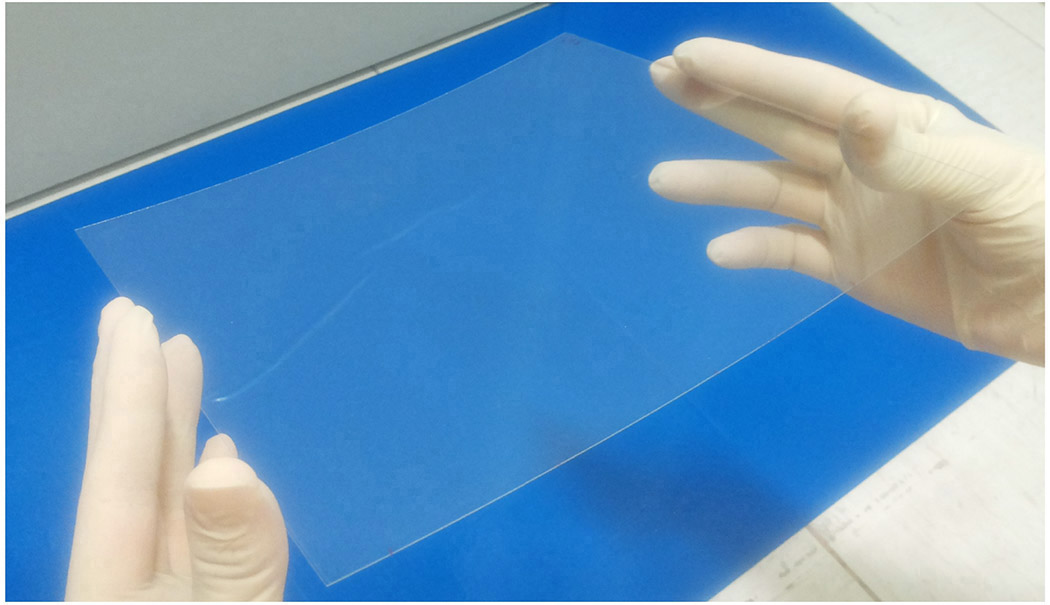 Figure 1. A Gorilla Glass foil slumped with a cylindrical shape.

We thermally curved four Gorilla Glass foils over a mold of Zerodur K20 (a semicrystalline material that does not stick to the glasses during the applied thermal cycle). Specifically, the mold we used for the hot shaping process had a cylindrical shape, with base dimensions of 250 × 250mm2, and a radius of 1m curvature. Before testing whether the foils would survive tempering, we used a carbon dioxide laser to cut them into four 100 × 100mm2 subfoil samples. None of the 16 samples were damaged by the process. We selected and characterized four of the samples (A, B, C, and D) before and after the tempering, and measured the surface roughness of the slumped and tempered Gorilla Glass subfoils with a WYKO TOPO-2D phase shift interferometer. We compared the results with the surface roughness measurements obtained from flat tempered Gorilla Glass foils. The results show that the entire process of slumping and tempering does not introduce any degradation to the glass surface microroughness (see Figure 2). This approach is therefore suitable for the production of x-ray glass mirrors.

The surface profile of sample A (see Figure 3) shows the figure errors with respect to the nominal cylindrical surface, before and after tempering. The difference between measurements taken before and after tempering are illustrated in Figure 4 to highlight the changes that can possibly be introduced by the process. Most of the differences in the maps are due to changes in the azimuthal direction (the horizontal direction in Figure 4). This is not critical for our integration, since we efficiently correct in this direction.7 However, along the longitudinal scans, we observed a change in concavity, with an amplitude reduction of about 1μm. We confirmed this result in all four foil samples.8 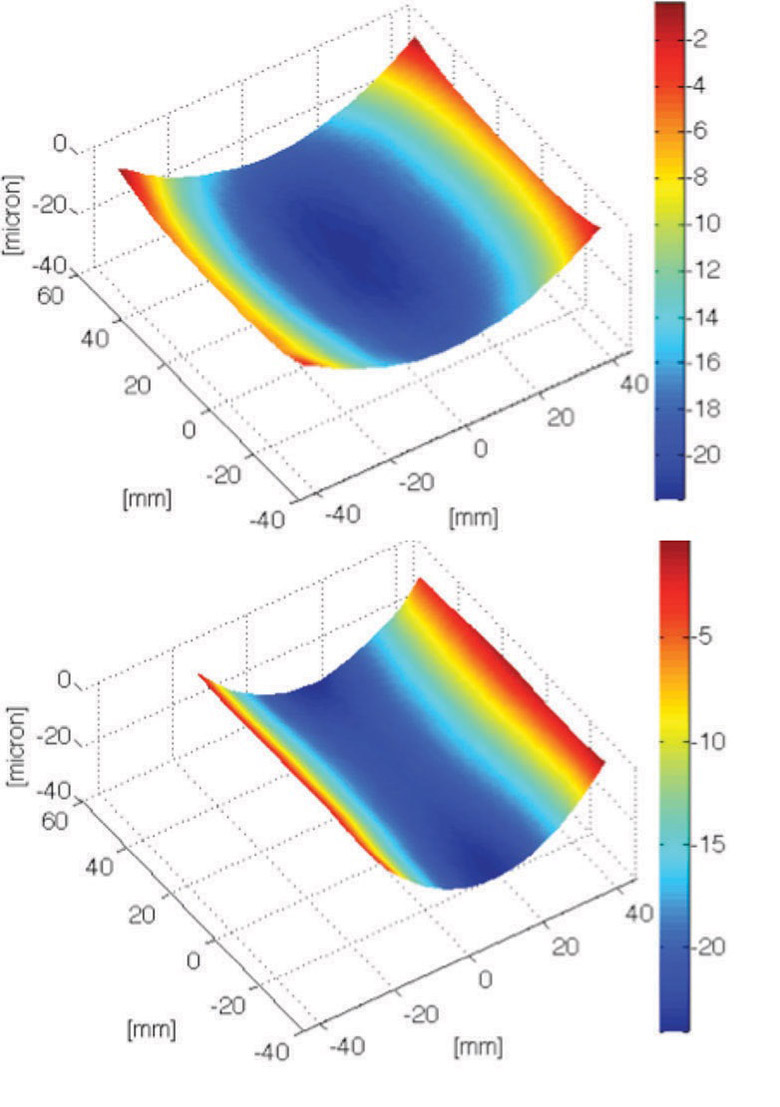 Figure 3. Deviation of the measured surface from the nominal cylinder of the slumped Gorilla Glass foil. (Top) The foil before tempering. (Bottom) The foil after tempering. The z-scale is in micrometers. 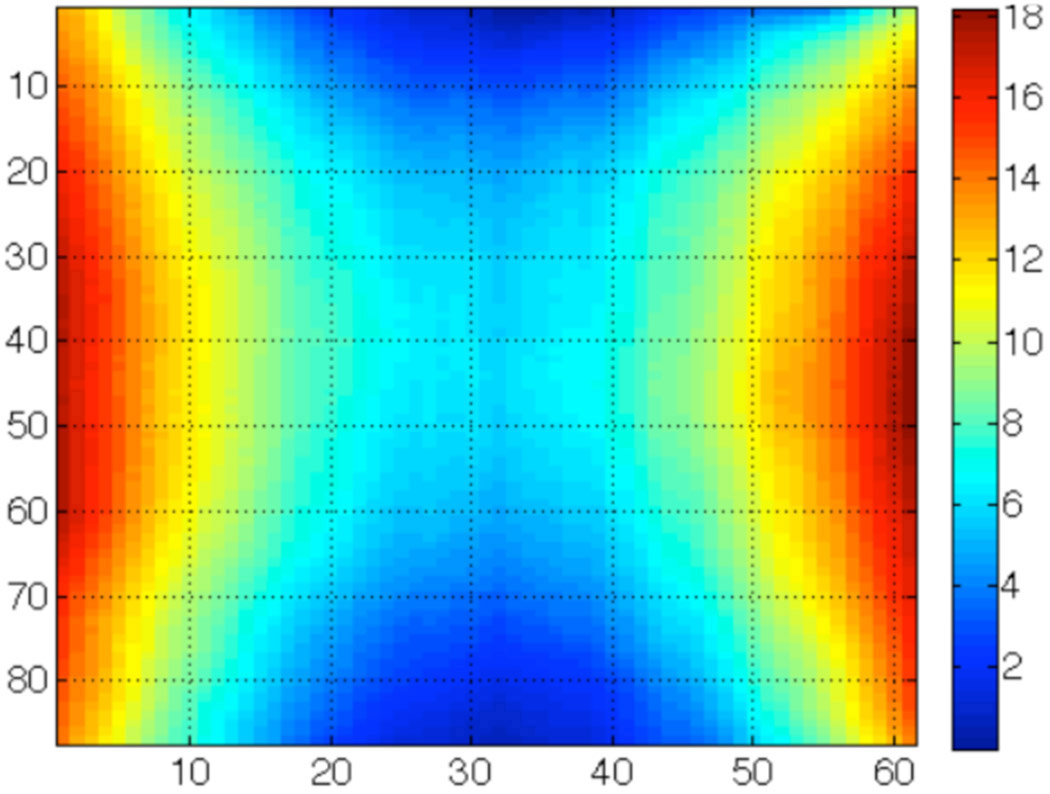 Figure 4. Difference (μm) between the two maps shown in Figure 3, i.e., before and after tempering. Horizontal and vertical scales are in mm.

To evaluate this result in terms of final performances for an x-ray telescope, we have simulated the integration of these 100 × 100mm2 glass foils, using four equally spaced ribs. The expected angular resolution, after integration of the samples, in terms of half energy width, is given in Table 1. These results show only a slight increase in angular resolution after the tempering process. This indicates that the chemical tempering of slumped Gorilla Glass foils does not substantially degrade the mid-frequency region of the foils' profiles. It should be noted that better angular resolution can be achieved with the use of active correction techniques.9

In summary, we have shown that Gorilla Glass foils, which are formed by pressure-assisted hot slumping, and which are then chemically tempered to increase their strength, have the potential for application in next-generation x-ray telescopes. In the future, to improve the statistics, and to test 200 × 200mm2 cylindrical Gorilla Glass foil samples, we may use slumping molds made of aluminum oxide (Al2O3), for which the coefficient of thermal expansion is a better match to that of glass materials. We have already started investigating Al2O3, which appears to be a suitable material for slumping molds as it does not stick to the glass foil during the thermal cycle. A next step is to conduct x-ray tests on the 200 × 200mm2 integrated glass foils to experimentally assess the performances of slumped and tempered Gorilla Glasses for x-ray telescopes.

This research was supported in part by the European Space Agency (contract 22545). The authors thank the members of the Brera Astronomical Observatory team who participated in this work: S. Basso, C. Brizzolari, M. Civitani, M. Ghigo, L. Proserpio, G. Pareschi, and D. Spiga. The authors also thank Y. Suppinger from EuropTec, where the tempering process was carried out, as well as G. Parodi, P. Attinà, and E. Buratti for very useful discussions.

Bianca Salmaso obtained her degree in physics in 1993 from the University of Milan. She then worked as a photolithography engineer at ST-Microelectronics until 2003. She has worked at the OAB since 2009, and is now undertaking her PhD in the development of high-resolution glass mirrors for x-ray telescopes.