Organic semiconductors are fascinating systems whose functional properties are deeply connected to the interplay between electronic and molecular structure. This, together with their multifunctionality and low-cost processing, makes organic semiconductors suitable for a variety of applications. Indeed, the potential of organic semiconductor-based devices for light generation has already been demonstrated by the commercialization of display technologies based on organic LEDs (OLEDs). In terms of performance and reliability, the OLED is by far the most developed organic technology, and active matrix OLED displays have been introduced into the market, primarily in the mobile consumer electronics sector. However, at high current densities, OLEDs are susceptible to considerable exciton quenching, which decreases their efficiency. This disadvantage is a substantial impediment to bright, efficient, and stable light sources. It is also an obstacle to the long-searched-for organic electrical injection laser, a theoretically simple, low-cost device source of laser light.

Organic light-emitting transistors (OLETs) represent a novel class of organic devices that combine the current-modulating function of a transistor with light emission, and also offer efficiency increases. This could pave the way toward nanoscale light sources and highly integrated organic optoelectronics.

For the case of an ideal ambipolar OLET—which allows transport of both positive (hole) and negative (electron) charges—the ambipolar regime is characterized by hole and electron accumulation layers next to the source and drain electrodes, respectively:1 see Figure 1(a). The recombination of electron and hole currents moving in-plane is thus controlled by the gate electrode. Electroluminescence intensity is tuned by the voltages at both the drain (VDS) and the gate (VGS) electrodes. Consequently, in contrast to OLED architecture, in an ambipolar OLET the position of the recombination zone can be moved within the transistor channel by varying the applied gate and drain voltages.2 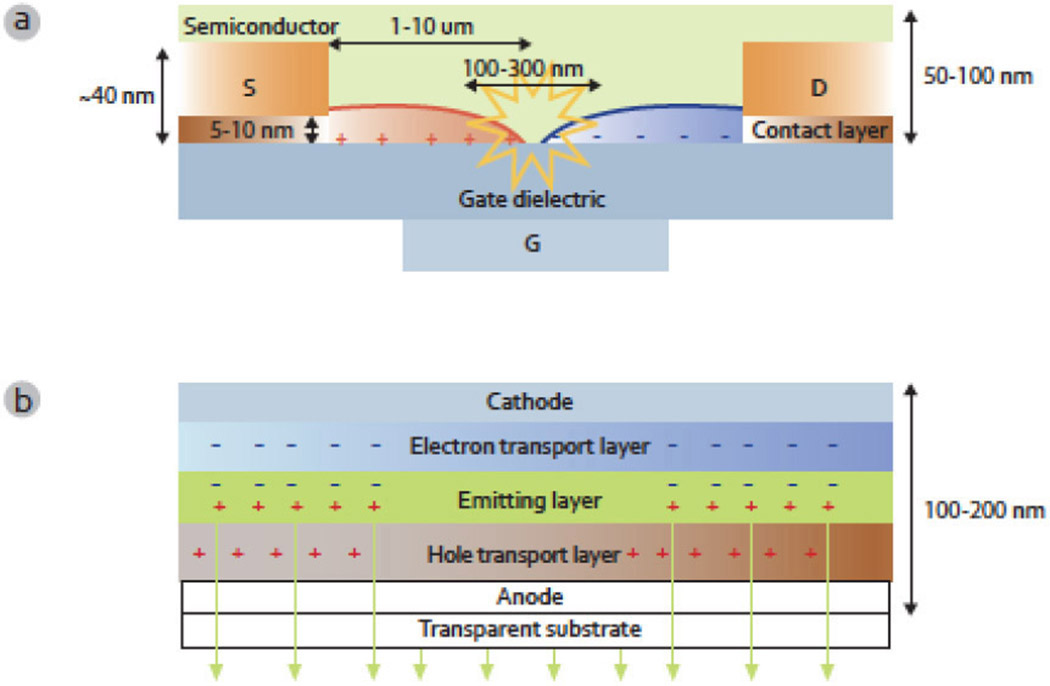 Figure 1. Schematic representation of device structures and the main optoelectronic processes occurring in an organic light-emitting transistor (OLET) and organic light-emitting diode (OLED). (a) A key difference in OLETs is that electron and hole charge transport occurs in-plane at the dielectric/organic interface. (b) In OLEDs charges move vertically across the organic layers. Dimensions of device features as well as the location of the recombination areas are shown. (Image prepared by Absolut Eventi & Comunicazione, and reprinted with permission.2)

A clear advantage of OLETs is the potentially higher electroluminescence quantum efficiency inherent in the device structure, leading to higher efficiencies overall. In fact, exciton quenching, by interaction with charge carriers, the externally applied electric field, or metal contacts, is drastically reduced by this design. We have shown experimentally the superior performance of OLETs compared to OLEDs, in terms of external quantum efficiency, by fabricating OLED and OLET devices presenting the same active region, shown schematically in Figure 2(a) and (b). 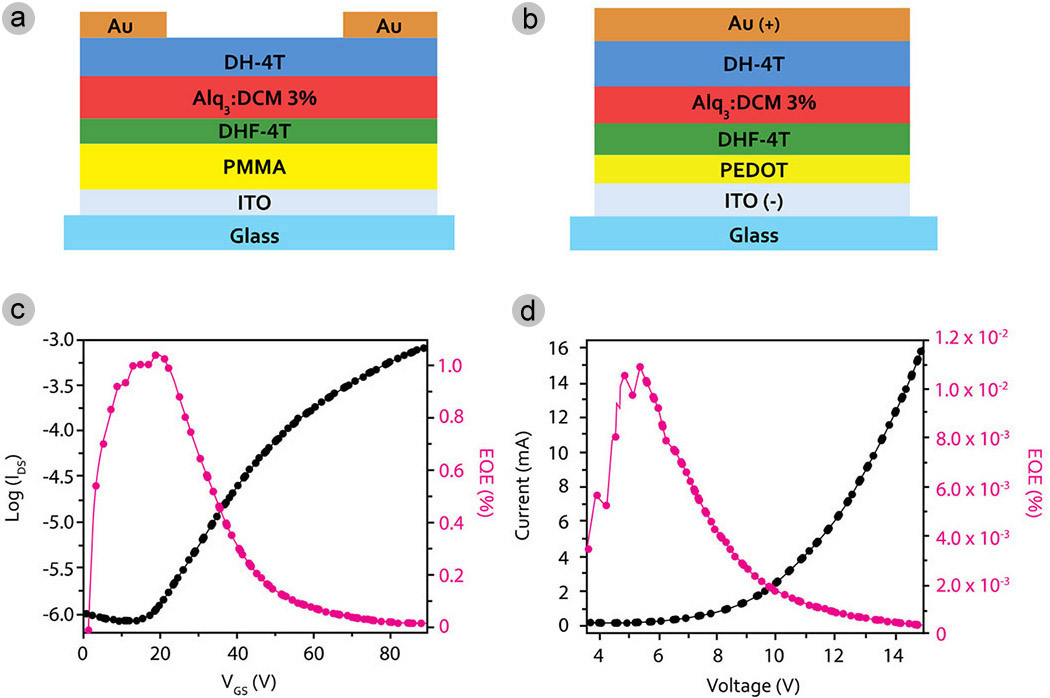 The active region in the OLET device is engineered by substituting the ambipolar single layer by a vertical p-channel/emitter/n-channel heterostructure. We constructed an equivalent OLED, in which the layer sequence, thickness, and film growth parameters are exactly the same as those used for the heterostructure-based OLET device. The electrodes are indium tin oxide coated with a poly(3,4-ethylenedioxythiophene) layer for the anode, and gold for the cathode. The dielectric layer is, of course, eliminated.

The implementation of OLETs as a key element in the design of highly integrated organic optoelectronic systems and innovative pixel architectures requires strict control of the emission area geometry. A 20–100μm illuminated area is necessary to develop OLET-based display technology with a favorable ratio between illuminated and dark areas in the pixel. To address this need, we, the start-up E.T.C., and CNR, recently showed that in a suitably optimized OLET architecture, both the position and the extension of the emission area can be controlled by the applied voltage, achieving illumination of the entire transistor channel.

Figure 3 shows optical microphotographs of the device channel when the trilayer OLET is biased at constant VDS and different VGS values are applied.4 With VGS=−20V and VDS=−100V—see Figure 3(b)—and therefore in the electron-injection regime, a 10μm-wide light-emitting region is formed in the channel, starting from the edge of the source electrode. With increasing | VGS |, the emission stripe shifts toward the drain electrode, becoming broader and brighter. In the ambipolar regime—for which VGS=−60V and VDS=−100V—see Figure 3(d)—the emission area almost completely covers the 70μm channel, reaching the drain electrode and extending for a few microns underneath. Switching from the ambipolar to the completely unipolar hole-transport regime, electroluminescence peaks in the proximity of the drain electrode and the emitting area extends underneath the electrode for 20μm. 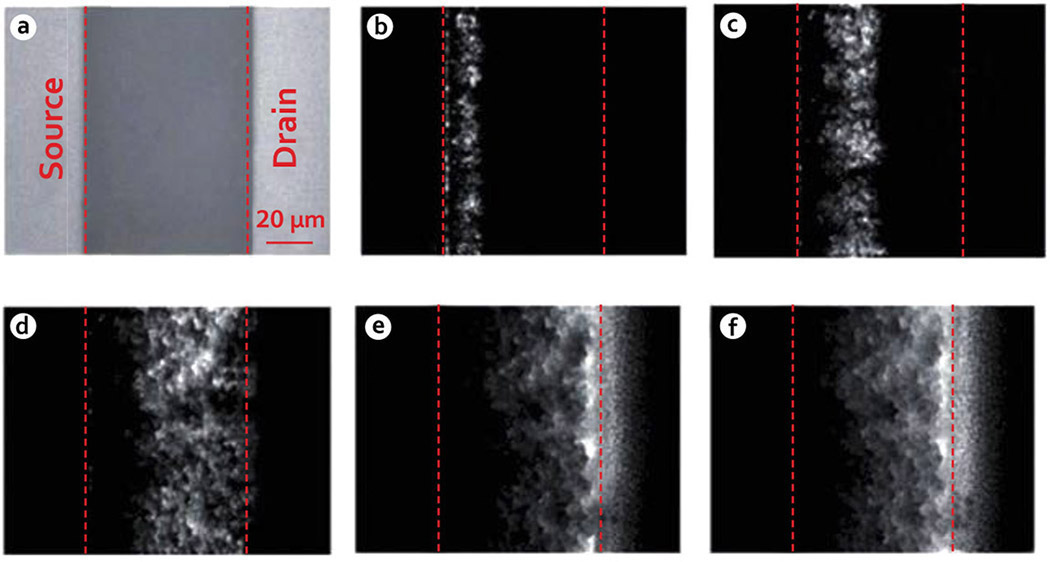 Figure 3. Images of the light-emitting area in the trilayer OLET channel, collected through the glass substrate. A transmission optical microphotograph of the unbiased channel is reported for reference (a). The gate-source voltage, VGS, is varied—(b) 20V, (c) 40V, (d)  60V, (e) 80V, and (f) 100V—while the source-drain voltage VDS is kept constant at 100V. The intensity scale of the different optical images is normalized to avoid image saturation. (Image prepared by Absolut Eventi & Comunicazione, and reprinted with permission.4)

Over the last 10 years, scientific interest in OLETs was prompted by the potential of device architecture that suppresses the deleterious photon losses and exciton quenching mechanisms inherent in OLEDs. Now, recent experimental evidence demonstrates that OLETs are proving to be an effective optoelectronic device platform for enabling novel organic photonic applications and display technologies. The combination in a single device of electrical switching and light emission functionalities reduces the number of switching thin-film transistors needed in the driving circuit, while the easy-to-process device architecture naturally avoids pinholes and shorts between injecting contacts.

Finally, the full compatibility of field-effect light-emitting devices with well-established electronic and photonic planar technologies may allow the development of both innovative optical communication and highly-integrated optoelectronic systems that incorporate OLETs as a key active element. Indeed, in the very near future we aim at introducing a 1D planar optical cavity as a functional multilayer in the OLET device structure.

Stefano Toffanin is a researcher at the CNR-ISMN, where he is currently head of the research unit focusing on advanced multifunctional devices based on organic and hybrid nanostructures. His main research interest is the spectroscopic investigation of light emission and charge transport in organic systems for use in optoelectronic devices, by means of non-conventional ultrafast optical probes.