Organometal halide perovskite solar cells convert the visible range of solar light to electricity more efficiently than silicon solar cells. Organometal halide perovskites combine high absorption coefficients with good charge transport properties, making them ideal candidates for thin-film solar cells. Thin-film active layers with thicknesses of around 300nm can absorb most incident light, and also allow for efficient charge extraction by the contacts. In recent years, perovskite solar cells have seen a performance increase exceeding 20% efficiency in laboratory-scale devices.1 For example, adding a perovskite layer to a silicon photovoltaic cell to create a tandem cell widens the absorption range of light, resulting in simulated device efficiencies of over 30% compared to 25% for just silicon. This type of module technology may boost future performance. A range of different substrate materials, such as glass, metal, and plastic, can be used to bring pervoskite solar cells into applications that are not limited to flat surfaces.2 Even different-colored semi-transparent devices are within reach, which will allow the use of perovskite materials in a wider range of applications.

Energy generation from the sun requires large-area devices due to the low energy density of solar radiation reaching the Earth's surface. For new and emerging technologies, such as perovskite solar cells, research into device and process development necessarily focuses on very small sample sizes ranging from square millimeters to a couple of square centimeters. Additional development will be required to achieve the target size of square meters needed to move from the laboratory to the market. 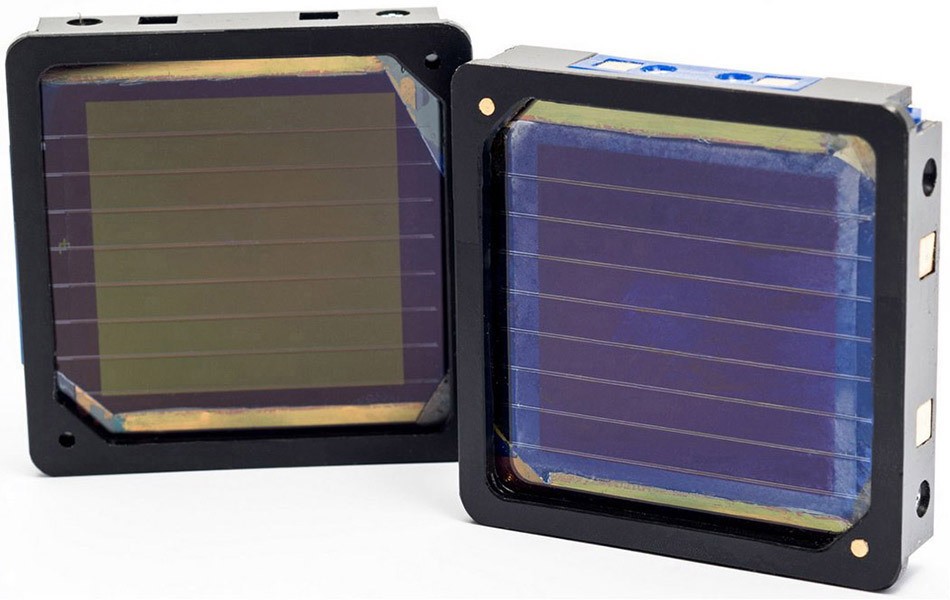 Figure 1. Two perovskite modules with 16cm2aperture area. The horizontal lines separate the aperture area into eight subcells. The separation pattern consists of scribes that form the serial electrical interconnections between the cells. This pattern is directly applicable to larger areas and different substrate materials.

To demonstrate perovskite modules, we use ITO-coated glass substrates with a vapor-deposited planar titanium dioxide (TiO2) layer (see Figure 2). A solution-processed perovskite layer forming the active material, consisting of a composition of methylammonium iodide and lead chloride (CH3NH3PbI3−xClx or MALIC), is covered by an organic solution-processed hole-transport layer (Spiro-MeOTAD). The device is finished with a vacuum-deposited layer of Au, resulting in an overall device thickness of less than 1μm (without the glass substrate). Following device optimization on laboratory-scale devices with 0.1cm2 active area, the fabrication parameters are transferred to the module process. The applied module structure has eight subcells of 2cm2 aperture area separated by 5mm, giving an aperture area of approximately 16cm2 (see Figure 1). A standard interconnection geometry with three patterning steps (P1-P2-P3) contacts the subcells in series, ensuring low loss of the aperture area and low power loss due to contact sheet resistance. We use photolithography or laser ablation for P1, and pattern the coated layers with a mechanical scribing technique in steps P2 and P3. Because the patterning tool is installed in an inert atmosphere environment, the devices are protected from air exposure during fabrication, significantly improving performance. 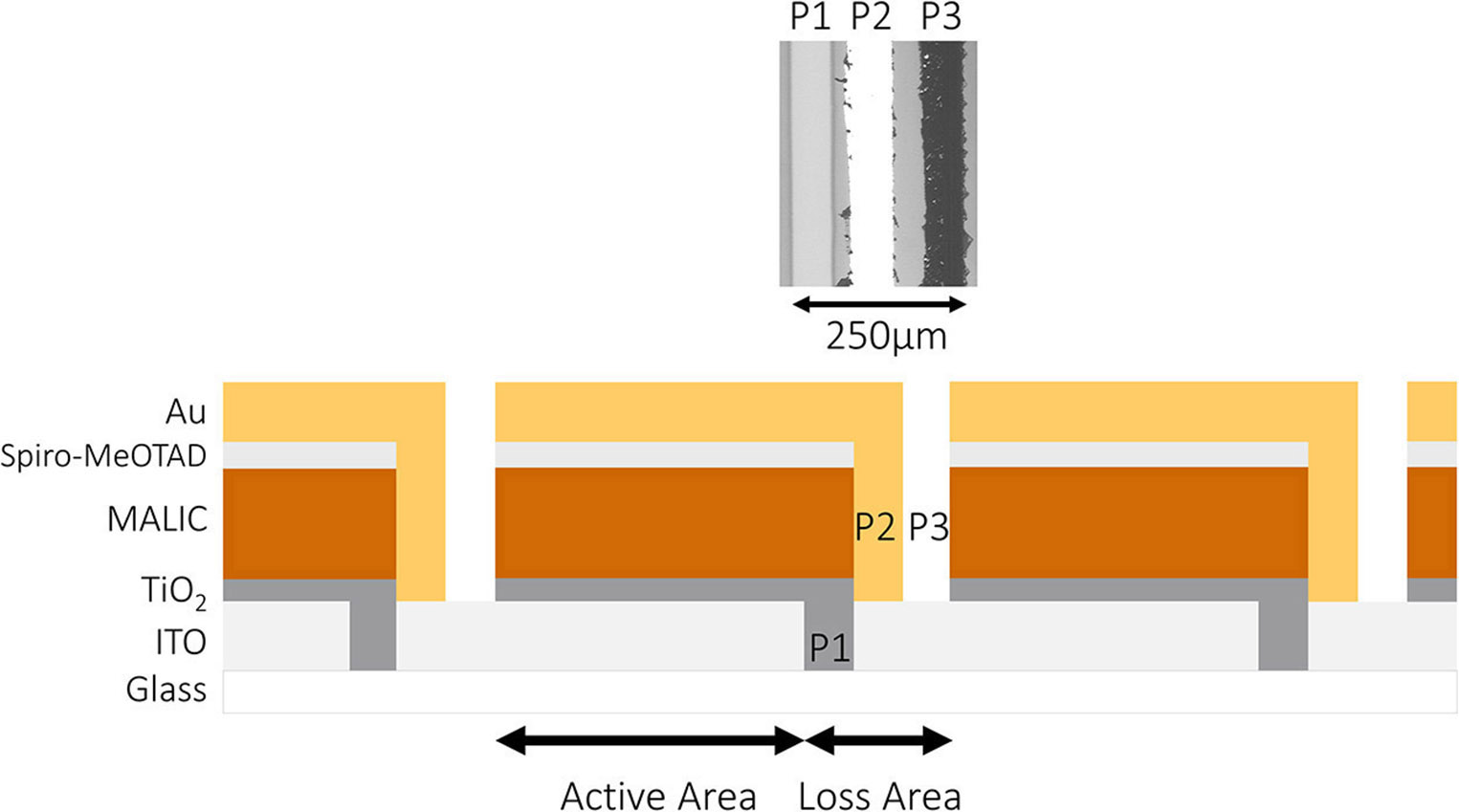 Figure 2. Bottom: Schematic image of the perovskite solar cell structure and the module interconnections comprising an indium tin oxide (ITO) electrode, titanium dioxide (TiO2) spacer layer, a perovskite active layer of methylammonium iodide and lead chloride (MALIC), an organic hole-transport layer (Spiro-MeOTAD) and a gold (Au) electrode. The P1-P2-P3 patterning steps are performed after the patterned layer or layer stack is coated. P1 and P3 disconnect the contacts to separate the subcells, while the P2 scribe is used for the interconnection of neighboring cells. Top: Optical microscope image demonstrating that the lateral extension of the ‘loss area’ is 250μm, which is equivalent to 5% of the aperture area.

The target of the three patterning steps is to achieve a good electrical series connection with low area loss. With our method, we are able to reduce the area loss to a minimum of 3% of the total area.3 In the standard process, geometrical fill factors (active area versus aperture area) of 95% are achieved: see Figure 2 (top). The good electrical connection between the subcells is demonstrated by the high electrical fill factor of 77%, together with the aperture area efficiency of 11.3% (see Figure 3). The serial connection of small-area subcells results in low currents but high module voltages. An equivalent module with a size length of one meter would consist of 200 subcells, leading to a module open-circuit voltage of 180V.

Figure 3. Electrical properties of a 16cm2perovskite module. The serial interconnection of eight subcells results in a high operating voltage of approximately 6V at the maximum power point. As the number of subcells is directly proportional to the lateral extension of the module, future larger-area devices are expected to operate at several 100V. VOC: Open-circuit voltage. ISC: Short-circuit current. FF: Fill factor.

Organometal halide perovskite solar cells are not just a laboratory curiosity on small sample areas: they also demonstrate high performance on larger areas. The method described here of high precision, automated mechanical scribing, or alternatively (and ultimately) targeted laser patterning is not limited to specific substrate sizes and shapes. In combination with linear coating techniques for solution-processed layers, perovskite solar cells can be produced cost- and energy-efficiently on large areas with high speed. Our next step will be to increase the device size from 16 to 150cm2 while keeping the same performance.

Robert Gehlhaar studied physics at the Dresden University of Technology (TU Dresden), Germany, and received his PhD in 2007. He joined Imec in 2009 and has been working on organic and perovskite solar cells and modules since then.