A graphene-based quantum-point-contact transistor with a nanopore enables the sensing of double- and single-stranded DNA.
04 November 2015
Jean-Pierre Leburton

Interest in finding a low-cost, rapid genome sequencing method has been growing in recent years. Among the methods currently available (e.g., the Sanger sequencing protocol and the pyrophosphate detection technique), the use of nanopore membranes represents a promising new technology that could lead to significant advancements in the field of personalized medicine. In typical nanopore sequencing experiments, DNA molecules in an electrolyte are threaded through the pores under an applied voltage. The presence of the DNA nucleotides in these pores then causes transient dips in the ionic current. Resolving the magnitude and duration of each dip could enable the identification of individual bases and, in turn, the sequencing of DNA molecules.

Due to progress in semiconductor nanotechnology, the fabrication of ultra-small solid-state materials (on the molecular scale) with high-precision electrical sensing capabilities (corresponding to a fraction of an electron charge) is now possible. Artificial nanometer-sized pores can be fabricated in solid-state membranes using a variety of techniques with materials such as silicon, silicon dioxide, silicon nitride, and aluminum oxide. In this framework, semiconductors play an important role because they can be doped with donor or acceptor impurities, enabling control over their electrical properties. This feature makes the materials versatile for use as nanoporous layers in electrolytes that can be connected to voltage sources. The voltage sources can then be used to regulate ion flows and sense the charged biomolecules translocating through the nanopores. Moreover, the compatibility of silicon with semiconductor electronics makes it the ideal material for bionanoelectronics integration.

We have been able to detect and characterize the passage of both double- and single-stranded DNA molecules (dsDNA and ssDNA, respectively) in a variety of configurations using graphene nanoribbons (GNRs) with a nanopore. Recent advances in the development of 2D materials (e.g., graphene and transition metal dichalcogenides) have opened new horizons for genomics based on nanopore membrane technology. The single-atom thickness of monolayer graphene enables the high-resolution scanning of molecules passing through the nanopores. Additionally, as a conventional semiconductor material, graphene is electrically active, thereby enabling the electronic control and sensing of biomolecules.

Our device is based on a multilayer membrane design in a configuration that is similar to that found in field-effect transistors, with a graphene layer as the 2D channel for DNA sensing (see Figure 1). The unique feature of our device is the presence of a back-gate that can control the carrier concentration in the 2D graphene channel, enabling optimization of the sensitivity of the electronic current to nucleotides in the pore. To further increase the sensitivity of our device, we shaped the regions around the nanopore using quantum point contact (QPC) geometry. As a result, the current exhibits an extremely nonlinear dependence on the carrier concentration. The electronic properties of our graphene QPC (g-QPC) are not limited by stringent GNR uniformity (such as that found in armchair or zigzag geometries) in the boundary conditions. Its irregular edge yields a complex band structure and a rich conductance spectrum, with many regions of high electronic sensitivity. 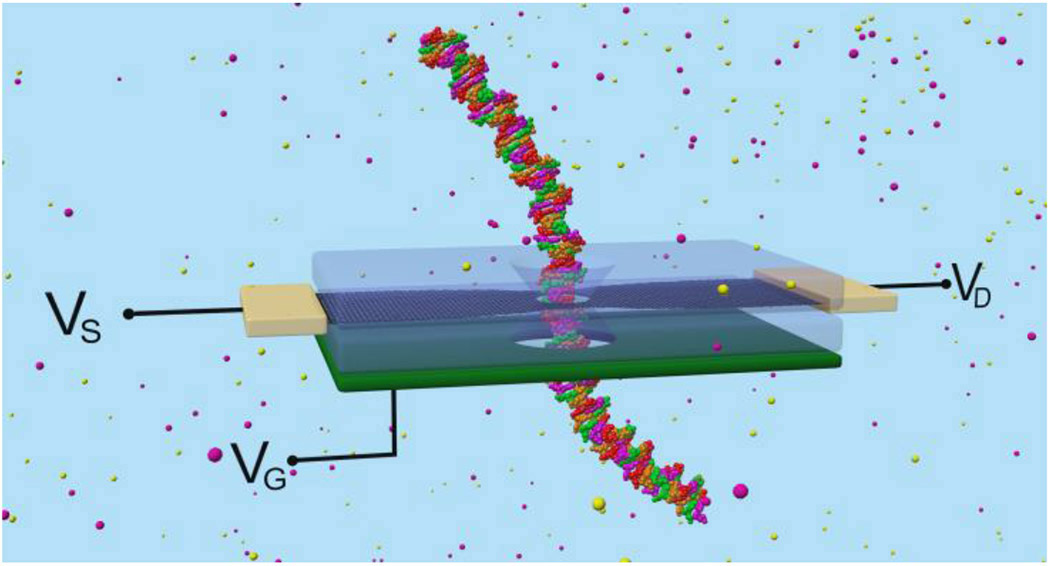 Figure 1. Schematic diagram of a bioelectronic multilayer membrane device containing a nanopore for the sequencing of DNA molecules. The membrane consists of a graphene nanoribbon (black) with a nanopore, sandwiched between two oxides (transparent) above a heavily doped silicon layer that acts as a back-gate (VG, green). The graphene layer operates as a detector carrying an electronic current between the source and drain leads (VS and VD, gold), which varies when a DNA nucleotide passes through the nanopore. The detector sensitivity is enhanced by the bottom gate, which controls the graphene conductance.1

By using molecular dynamics integrated with self-consistent transport modeling, based on non-equilibrium Green-function formalism, we have shown that our g-QPC transistor is a promising device for sensing and potentially sequencing DNA molecules as they translocate through the nanopore.1 In particular, we have demonstrated the ability of the g-QPC to electrostatically detect the helical nature of dsDNA and its conformational transitions when subjected to forced extension (i.e., from helicoidal into ladder conformation). We were also able to distinctively count individual bases of an ssDNA molecule passing through the nanopore using this method.2 The position of the nanopore in the QPC transistor can drastically influence the electronic conductance variation in the graphene membrane due to the presence of the charge carried by a biomolecule. Additionally, the detection sensitivity can be enhanced by choosing a particular nanopore geometry (i.e., its diameter and shape), and by modulating the graphene electronic carrier concentration via the electrical bias on a gate electrode.3 Indeed, with smaller pore diameters, the DNA passes closer to the graphene edge. Additionally, a higher carrier concentration increases the electronic conductivity, thereby enhancing the electrical current variation. As a result, the detection sensitivity is increased.

Controlling the motion and translocation velocity of DNA is a currently a key impediment to sequencing DNA using nanopores. It may be possible to slow down DNA translocation by adding other graphene or conducting layers within the transistor structures of the membrane. These layers could then operate as a control gate to trap the DNA inside the pore. Another graphene layer could also be used to generate a focusing field to trap the DNA, thereby reducing undesirable stochastic flossing of the DNA inside the pore (which adds noise to the nucleotide detection). The original graphene layer (VDS) could then be employed to read sheet currents and discern passing nucleotides.

We have developed a graphene-based QPC transistor that enables DNA molecule detection and shows promise for DNA sequencing. Our approach demonstrates the ability to detect morphological transformations of dsDNA and the passage of individual base pairs of ssDNA molecules through the nanopore. In the next stage of our research, we will simulate the detecting operation of the device under the influence of electrostatic control of secondary electrodes. This should reduce stochastic DNA flossing noise and optimize the electrical reading of the nucleotide sequence.

This work, in collaboration with A. Girdhar, C. Sathe, and K. Schulten, is supported by a grant from Oxford Nanopore Technology and the Seeding Novel Interdisciplinary Research program at the Beckman Institute.

Jean-Pierre Leburton is the Gregory E. Stillman Professor of Electrical and Computer Engineering at UIUC, which he joined in 1981 from the Siemens Research Laboratory in Munich, Germany. His expertise is in computational nanotechnology, and he has authored more than 300 technical papers in international journals and books.