A novel advanced algorithm is based on the sparsity hypothesis for phase and amplitude modeling.
14 September 2015
Vladimir Katkovnik, Karen Egiazarian, Igor Shevkunov and Nikolay Petrov

Contemporary digital holography is a popular tool that is used for many applications (e.g., microscopy imaging, data storage, terahertz imaging, and measurements of thermal fields). Among various holographic methods, digital off-axis holography is of special interest because it allows both phase and amplitude to be reconstructed from a single frame observation. This method also provides efficient elimination of twin images, and can be achieved with simple experimental facilities. The noise sensitivity of digital off-axis holography reconstructions, however, is a serious problem.

Previous methods for wavefront extraction from off-axis holograms are based on the assumption that there are slow local variations in the object amplitude–phase characteristics within a single interference fringe.1, 2 These approaches, however, are relatively inflexible and do not provide accurate wavefront reconstructions. To improve such methodologies and their associated algorithms, it is possible to exploit the so-called sparsity of the phase and amplitude, as functions of the transverse coordinates. A signal or image is ‘sparse’ if there are a small number of basis functions that enable their high-accuracy approximation. This small number allows an estimation—which is robust to noise and various other disturbances during the observations—to be made. It is a well-established fact that many ‘natural’ images are sparse, but these sparse basis functions are unknown a priori. This is therefore one of the major difficulties associated with the practical application of sparsity for data processing. Both ‘internal’ and ‘external’ methods can be used to design sparse basis functions (also known as ‘dictionaries’) from observed noisy data and additional learning data, respectively.3

We have thus developed an original optimal algorithm for phase and amplitude reconstruction.4, 5 In our methodology, we take a model of data formation in the considered optical setup, as well as statistical properties of the noise, into account. To achieve our sparse approximation of phase and amplitude, we use our Block Matching 3D (BM3D) algorithm, in which we implement an efficient design of the internal sparse phase and amplitude basis functions. We base the BM3D algorithm on patchwise grouping, a collaborative filtering paradigm, and state-of-the-art image processing practices.6 The sparse approximations of the wavefront that we use for this work are universally known, and we have applied them to various problems that require complex-valued wavefront reconstructions.7, 8

We realize our method with an optical setup, with which we can inspect transparent objects. This setup is based on a Mach–Zehnder interferometer in the image-plane holography configuration, and we use a bitelecentric system to project the object onto the sensor plane (see Figure 1). With our method, the off-axis hologram is the interference pattern of the object and reference wavefronts measured at the registration (sensor) plane. For the case of a plane reference wavefront, the phase is a 2D harmonic function of the transverse coordinates. The frequencies are defined by the wavelength and the angles of the reference beam plane, with respect to the longitudinal optical axis. The phase and amplitude of the object, and the amplitude of the reference wavefront, are unknown, and we define them as the solution of a special multi-objective optimization problem. In this optimization formulation, the unknown phase and amplitudes are sparse functions of the transverse coordinates, and the noise additive to the interference pattern has a Gaussian distribution.

Figure 1. Experimental optical setup for off-axis image-plane holography. This is based on a Mach–Zehnder interferometer and includes a bitelecentric system to project the object onto the sensor plane. f: Focal length.

We have therefore developed our Sparse Phase and Amplitude Reconstruction (SPAR) algorithm to resolve the multi-objective optimization and estimate all the unknown variables. We apply the phase sparsity assumption to the absolute phase, and the phase unwrapping is imbedded within SPAR.4, 5 We have also experimentally verified our off-axis SPAR algorithm on various types of objects. For example, we have examined a fly's wing—which can be considered as an amplitude–phase object4—and a specially developed pure-phase test object.5 In our experiments, we used two laser sources (with wavelengths of 417.5 and 634.9nm), as well as two types of bitelecentric systems. The first of these systems allows the object wavefront to be transferred to the registration plane without magnification, and we use a micro-objective in the second system for digital holographic microscopy imaging.

The SPAR reconstructions of the absolute and the wrapped phase of the phase test object that we obtained are shown in Figure 2. The images in the top row indicate the results we obtained with the bitelecentric system in a 1:1 ratio. The images in the bottom row correspond to the case of the microscopic system with magnification. We have also compared these SPAR algorithm results with data from another state-of-the-art algorithm.1 We use the estimates from the older algorithm for the initiation of our recursive SPAR algorithm, and we find that the SPAR reconstructions look much sharper and less noisy. These differences are not as obvious for the absolute phase, but this is because there is a large variation in the absolute phase. The cross-sections of these absolute phase images (see Figure 3) demonstrate how accurately the SPAR algorithm eliminates noise in the initial estimate and that it preserves important phase object details.

Figure 2. Absolute (abs) and wrapped (wrap) phase reconstructions for a phase test object. The top row shows images obtained using the bitelecentric system. The images in the bottom row were obtained using the microscopic system and pertain to the area within the black square (top left). The reconstructions obtained with the Sparse Phase and Amplitude Reconstruction (SPAR) algorithm (second and fourth columns) are better than the initial estimates (first and third columns). The grayscale indicates the phase (in radians). 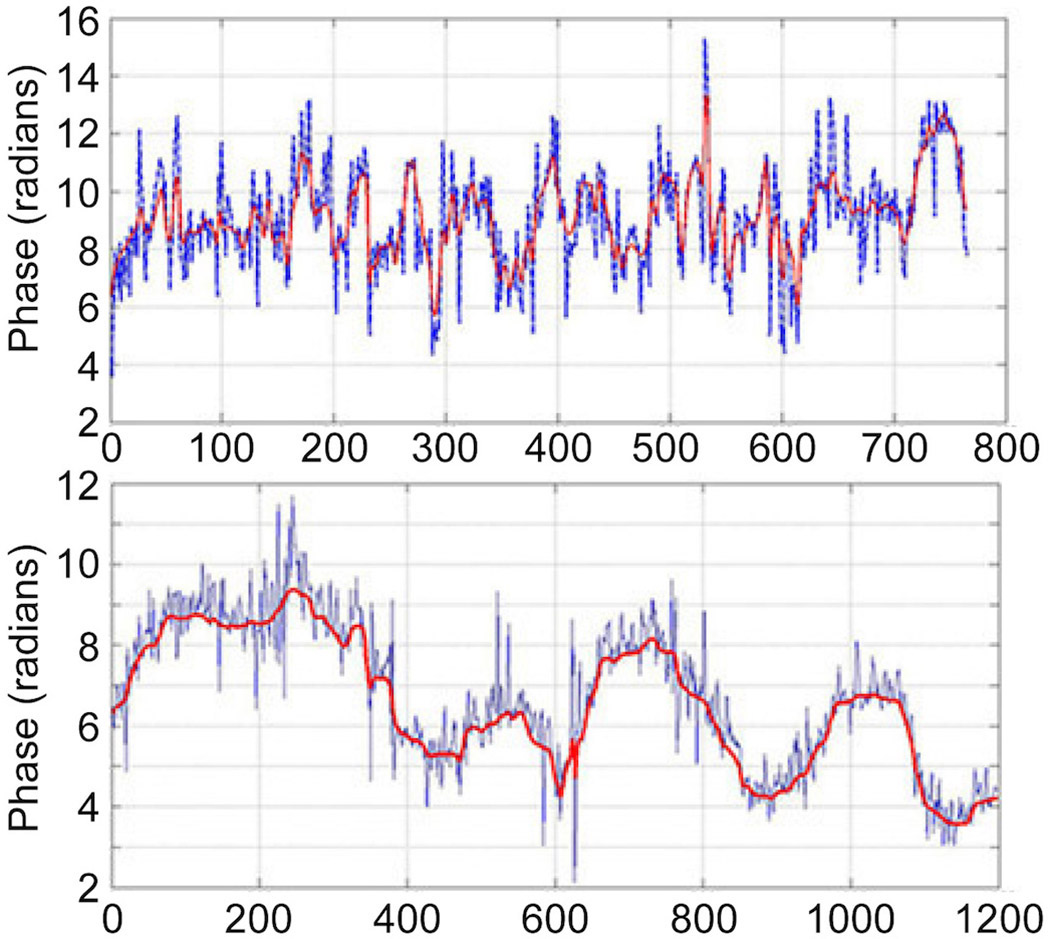 Figure 3. Cross-sections of the absolute phase images—from the locations marked by vertical black lines in Figure 2—as obtained with the (top) bitelecentric system and (bottom) the microscopic system. Red lines: Results from the SPAR algorithm. Blue lines: Initial estimates. Values on the x-axis are pixel numbers (along the cross-section).

We have developed and experimentally verified the new SPAR algorithm for phase and amplitude imaging from off-axis holography data. With our algorithm we demonstrate good performance for noise suppression and object detail imaging. In the next steps of our work we intend to develop the SPAR algorithm, based on data-adaptive complex-valued basis functions. This will allow us to make operation of the algorithm quicker, and should provide a major improvement in the quality of imaging we achieve.

Vladimir Katkovnik received his PhD in 1964 and his doctor of science degree in 1974. He is now a professor in the Department of Signal Processing. He is also the author or coauthor of six books and about 300 papers. His main research interests include stochastic optimization, image processing, interferometry, and digital holography.

Karen Egiazarian obtained his PhD in 1994 and is now a professor in the Department of Signal Processing. He is the author or coauthor of four books and about 600 papers. His research focuses mainly on problems within the fields of applied mathematics and image processing.

Igor Shevkunov is a postdoctoral researcher in the Department of Photonics and Optoinformatics. His main research interests are digital holography, interferometry, atomic and molecular physics, and lasers.

Nikolay Petrov is a senior researcher and associate professor in the Department of Photonics and Optoinformatics. He received his PhD in 2011 and is the author of more than 30 papers. His main research interests are holography, interferometry, femtosecond optics, and terahertz imaging.