Sunlight is one of the most abundant renewable energy sources, and the ability to harness it offers a sustainable solution to energy shortages. Despite this potential, however, conventional solid-state solar cells can generate only intermittent power. One alternative is chemical fuel (for example, hydrogen) produced by artificial photosynthesis, which offers the promise of converting and storing solar energy. Thus far, no such schemes have been realized commercially because of major shortcomings, for example, low efficiency and poor storage options for hydrogen.

To overcome these problems, we developed an all-vanadium photo-electrochemical storage cell (all-V PESC)1–4 to improve the efficiency of large-scale solar energy storage schemes. Figure 1 shows potential application of the system. Our design takes advantage of reversible redox reactants, namely, vanadium redox. These remain in liquid form during photocharge and discharge, and are therefore advantageous for easy storage and high capacity. Most importantly, when combined with an electrode hybrid of tungsten(VI) oxide (WO3) or titanium dioxide (TiO2), the cell offers good reversibility, significant improvement in photocurrent, and high-capacity electron storage,2, 3 which could enable continuous solar energy storage, even under dark conditions. 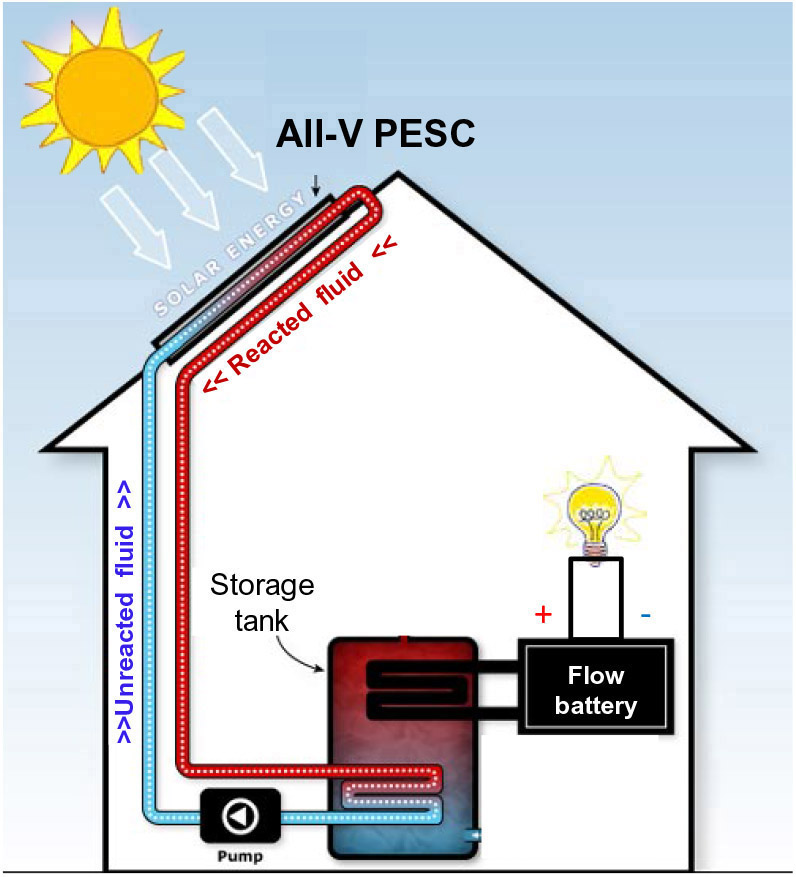 Figure 1. Schematic of the all-vanadium photoelectrochemical storage cell (all-V PESC), which would work under both light and dark conditions. Solar energy is stored during the day in the form of chemical energy in the storage tank. The electrons, stored using a hybrid electrode, continue solar energy conversion even under dark conditions. At night, the stored energy is converted to electricity using a flow battery.

To understand the electron storage mechanism, we investigated three electrolyte (anolyte and catholyte) combinations in an experimental photoelectrochemical (PEC) storage cell: see Figure 2(a). First, we employed 3 M of sulfuric acid (H2SO4) as both the anolyte and catholyte: see Figure 2(b). Second, we formed an all-V PESC using all-vanadium electrolytes and WO3/TiO2 hybrid electrodes with different WO3 content: see Figure 2(c). When coupled with vanadium redox species in an all-V PESC, the WO3/TiO2 hybrid electrode (with 24wt% WO3 content) offers long-term electron storage, good storage reversibility, and significant improvement in both photocurrent and dark current (resulting from release of the stored electrons). Finally, to distinguish the scavenging effects of holes and electrons by vanadium redox in electron storage, we used vanadium redox species only as either the anolyte or catholyte in the PEC storage cell. Figure 2(d) shows the photocurrent curve for the all-V PESC when we swapped the 0.01M V3+ catholyte (using a hybrid electrode with 24wt% WO3) for 3M H2SO4 at the counter electrode—the black curve in Figure 2(d)—while the anolyte remained the same. We observed a significant reduction in both photocurrent and dark current, compared with the case when only the anolyte was replaced: shown in the red curve in Figure 2(d). 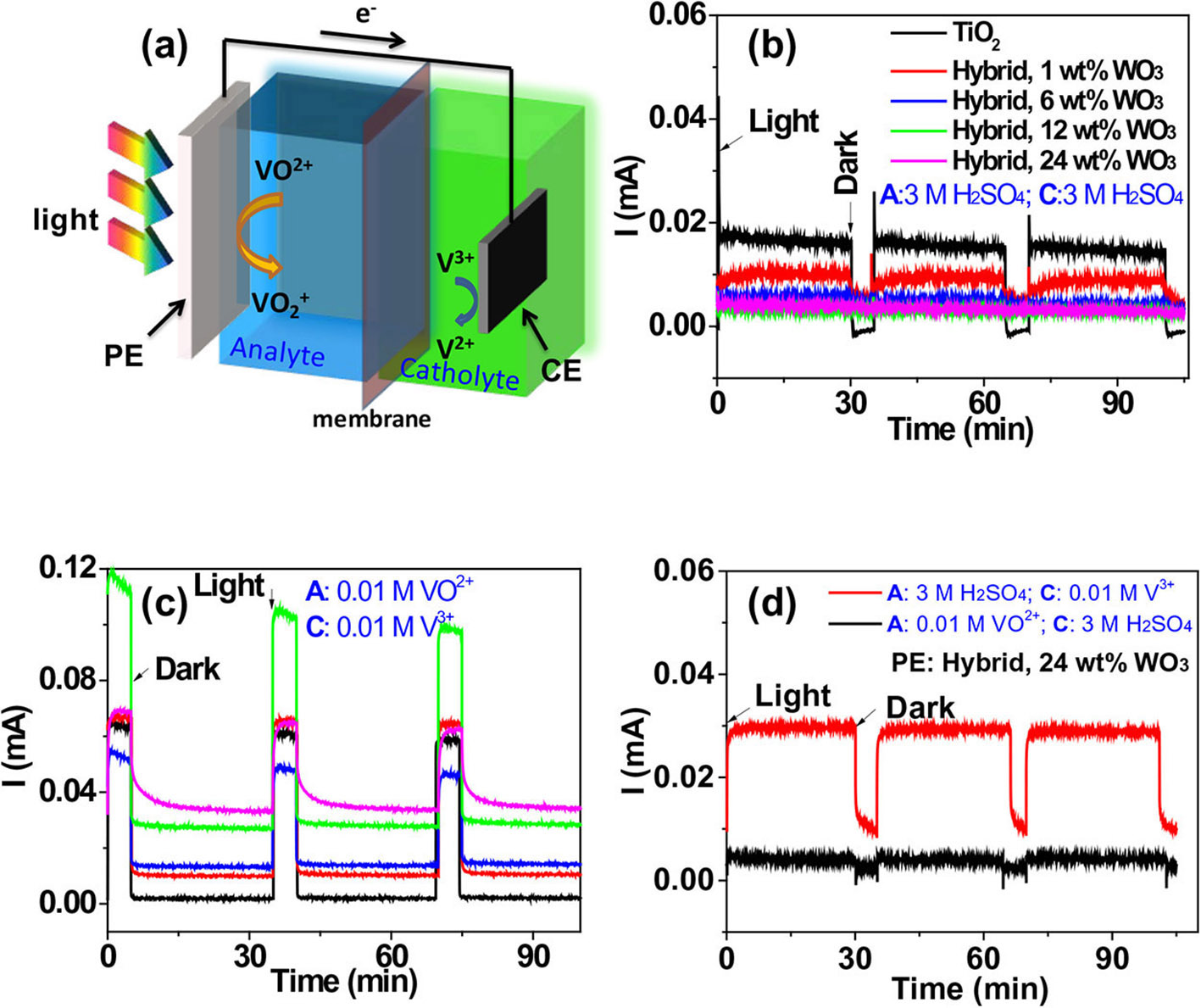 These results confirm that PEC water-splitting reactions, especially the oxygen evolution reaction, are sluggish compared with those involving vanadium redox, primarily because reduction and oxidation of water are complex multi-step reactions that require significant overpotential. Most importantly, our results show that when we use the vanadium redox species as the catholyte, it boosts electron transfer kinetics, and plays a critical role in reversible electron storage. We confirmed this by different photoelectrode coloration after illumination:3 blue-black appeared on the electrode in pure acid electrolytes, while in vanadium redox electrolyte, the electrode appearance remained unchanged, indicating fast decomposition of HxWO3, and thus quick release of the stored electrons.

Figure 3 shows the working principle of in situ electron storage and release with the aid of vanadium redox, enabling solar energy conversion under dark conditions. Under light, the fast vanadium redox reaction (VO2+/VO2+) efficiently consumes photogenerated holes, suppressing charge recombination, and enabling electron storage in HxWO3. Furthermore, the fast reaction kinetics of the V3+/V2+ redox helps boost the photocurrent. In the dark, decomposition of HxWO3 in the photoelectrode releases electrons, which flow in the same direction as the photocurrent under light. The kinetics of electron release are enhanced by the fast PEC reaction of V3+/V2+ redox, which proceeds in the same way as that under light. In other words, the solar energy storage reaction continues even under dark conditions.

Figure 3. Schematic of an all-V PESC that works under both light and dark conditions. The electron storage mechanism enabled by the all-vanadium redox is shown. The electrons stored under light in a hybrid electrode are released automatically in darkness, allowing the device to keep functioning. HxWO3: Hydrogen tungsten bronze. e-: Electron. h+: Hole.

In summary, we have shown that an all-V PESC using a hybrid photoelectrode represents a promising system for efficient and large-capacity solar energy storage, which potentially works in both light and dark. The role of vanadium redox, particularly the V3+/V2+ anolyte, is essential for good electron storage reversibility, and significant improvement in both photocurrent and dark current. This therefore improves the overall solar energy storage efficiency and the effectiveness of cell operation. In future work, we will focus on using more advanced materials to develop versatile and high-performance solar energy storage systems.

The authors thank the US National Science Foundation (ECCS-1254915) for financial support.

Fuqiang Liu is an associate professor in the Department of Materials Science and Engineering. He received his PhD from the Pennsylvania State University in 2006. His research group is currently focused on lithium ion battery materials, advanced rechargeable batteries, fuel cells, and photoelectrochemical energy storage. His scholarly work includes 20 patents and applications, 59 peer-reviewed journal publications, and 88 presentations.

Dong Liu received his PhD in materials science and engineering from the University of Texas at Arlington in 2015. His research interests include photoelectrochemical solar energy conversion and storage, photocatalysis, photoelectrochemistry, and electrode/electrolyte surface and interface study by in situ and operando dynamic spectroscopy.

Zi Wei received her BEng from Wuhan Institute of Technology in 2011. She is currently a PhD candidate at the Electrochemical Energy Laboratory in the Department of Materials Science and Engineering. She has been the recipient of many awards, including numerous scholarships and fellowships.