A new method for reliable detection of polluted sea surfaces

One of the main objectives—besides the detection of obstacles—of remote sensing systems, such as synthetic aperture radar (SAR) or aircraft side-looking airborne radar, is the detection of pollutants.1 In radar images, oil spills often appear as dark spots (i.e., with a reduced intensity of backscattered signal) and can therefore be difficult to observe. Developing new remote sensing techniques to detect oil spills in such images, however, is not a trivial task. For instance, it is often difficult—especially in low wind conditions—to distinguish oil slicks from other phenomena (e.g., organic films, some types of ice, areas shadowed by the coast, rain cells, or zones of upwelling). In addition, the detection capabilities of SAR systems are dependent on external conditions,1 as well as sensor parameters (e.g., frequency band and polarization).

The presence of pollutants has important effects on the geometrical and physical properties of the sea surface. When wind velocity is relatively low, oil forms a layer on the surface, which damps the surface roughness spectrum. When the wind speed is high, however, emulsion of petrol (i.e., oil or gasoline) with seawater occurs and the dielectric properties of the seawater are changed. In such cases, SAR technologies cannot be used to detect changes in the sea surface. Therefore, regardless of which sea spectrum is chosen, the dielectric constant of seawater is the only parameter that is truly connected to the presence of pollutants. To improve the performance of existing radar systems, it is thus necessary to make detailed analyses of the information contained in the electromagnetic (EM) field that is scattered by the sea surface. In this context, modeling the EM wave scattering that occurs from a sea surface can provide a wealth of information concerning the presence of various pollutants. Such substances may include organic films, oil slicks, and petrol emulsions on the sea surface.

The main goal of our work, therefore, is to analyze the detailed information contained within the EM field scattered from both clean and polluted sea surfaces (see Figure 1). In particular, we consider the dielectric constant as a function of the petrol concentration in seawater.2–4 We have obtained our results with the use of the rigorous forward-backward method (FBM).5 We have also compared our data with results from asymptotic models—the two-scale model (TSM) and small-slope approximation (SSA) model6, 7—in several configurations and for different acquisition parameters. Our numerical simulations could thus be used as the basis for developing a new reliable tool for the detection of sea surface pollutants.

Figure 1. Schematic illustration of electromagnetic (EM) characterization and detection of pollutants on a sea surface. 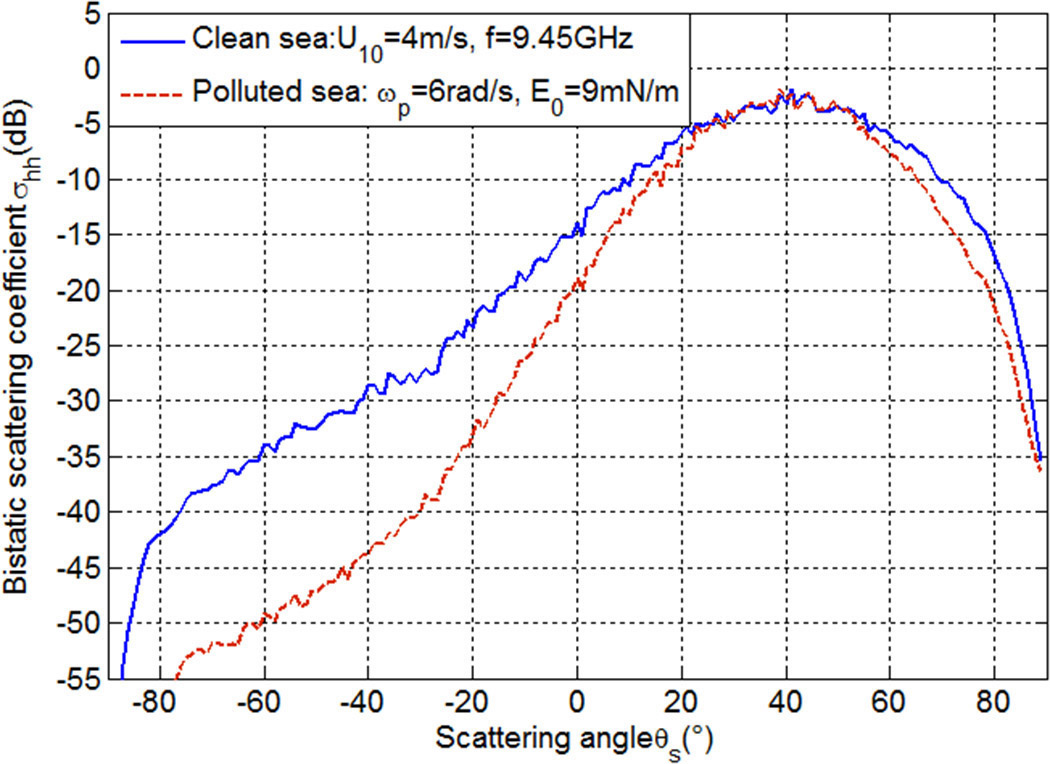 Figure 2. Bistatic scattering coefficients of a clean and a polluted (with a polluted layer) sea surface over a range of observation angles. These results were obtained from the forward-backward method (FBM), with a frequency (f) of 9.45GHz, horizontal transmit and horizontal receive (hh) polarization, an incidence angle (40°), a wind speed (U10) of 4m/s, a temperature of 20°C, and seawater salinity of 35ppm. In addition, the characteristic parameters of the pollutant layer were kept constant, with a characteristic pulsation (ωp) of 6rad/s and an elasticity modulus (E0) of 9mN/m.

To confirm this analysis, we have simulated the absolute value of the difference between the EM scattering coefficients for the clean and polluted sea surfaces (see Figure 3). We used the TSM and SSA asymptotic models as well as the rigorous FBM for these simulations, and we investigated a range of parameters. We ran the simulations for a range of scattering angles (−85 to 20°), two incidence angles (40 and 60°), a wind speed (at a height of 10m) of 15m/s, and a range of petrol concentrations (0–60%). The remaining simulation parameters were set to be equal to the values shown in Figure 2. 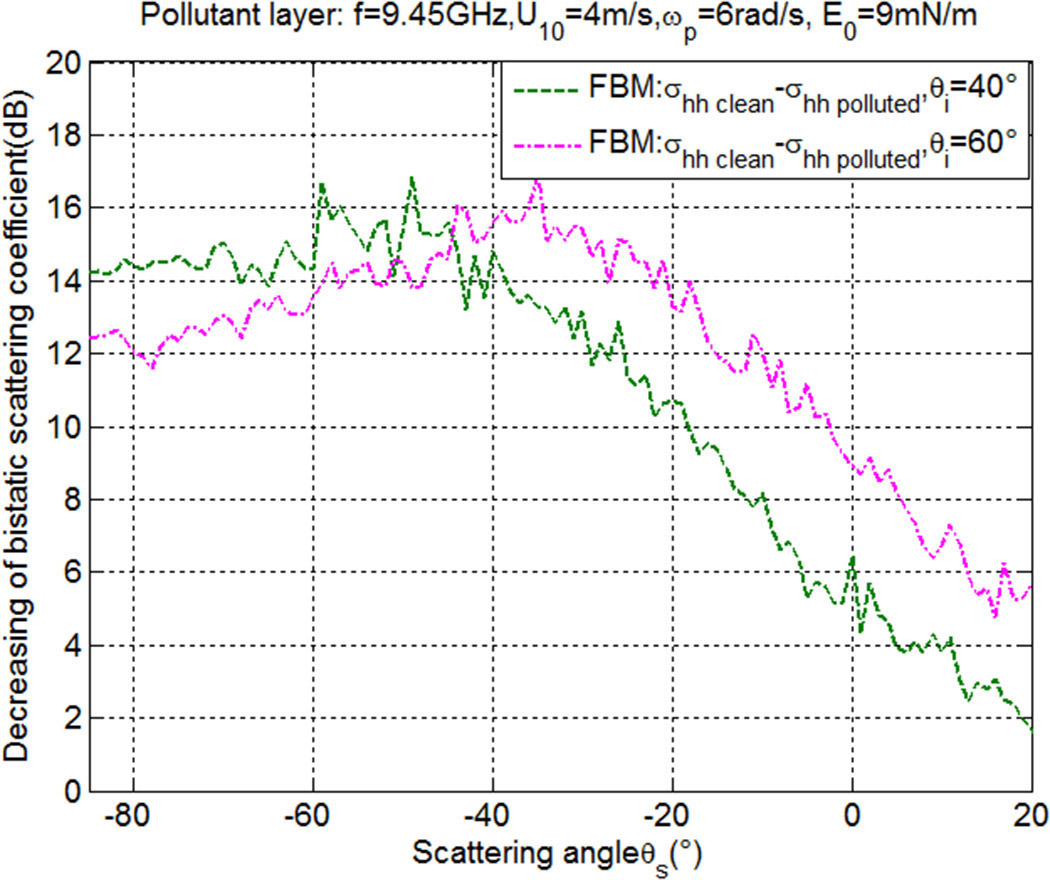 For the case of petrol emulsion (see Figure 4), we see that the presence of petrol in seawater creates a difference between the bistatic scattering coefficients of a sea surface that does, and does not, contain petrol. We also observe that the maximum energy is received around the specular direction, and that the energy level decreases with increasing petrol concentration in the seawater. We have also analyzed the reduction of the bistatic scattering coefficients to further investigate the impact of petrol emulsion on the sea surface EM signature. We analyzed this reduction for the case of fixed scattering and incidence angles (i.e., the scattering and incidence angles were equal to either 40 or 60°) and as a function of various petrol concentrations (between 25 and 60%). Our results (see Figure 5) indicate that the maximum difference between the radar scattering coefficients for a clean and a polluted sea surface is about 9dB for vertical transmit and vertical receive (vv) polarization, and is 1–3dB for horizontal transmit and horizontal receive (hh) polarization. We therefore conclude that the reduction of the EM scattering coefficient is more important for vv polarization than for hh polarization. This reduction is essentially caused by the influence of the relative dielectric constant for the emulsion of petrol and seawater. 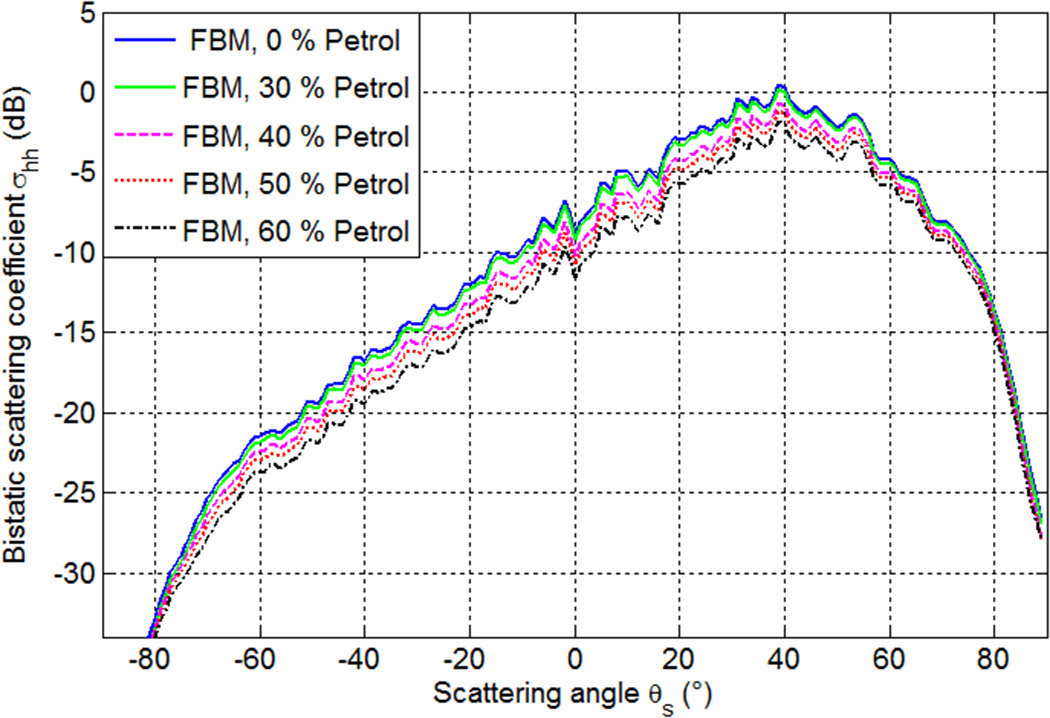 Figure 4. Bistatic scattering coefficients of a clean and a polluted (with a petrol emulsion) sea surface, simulated using the FBM for a range of petrol concentrations. 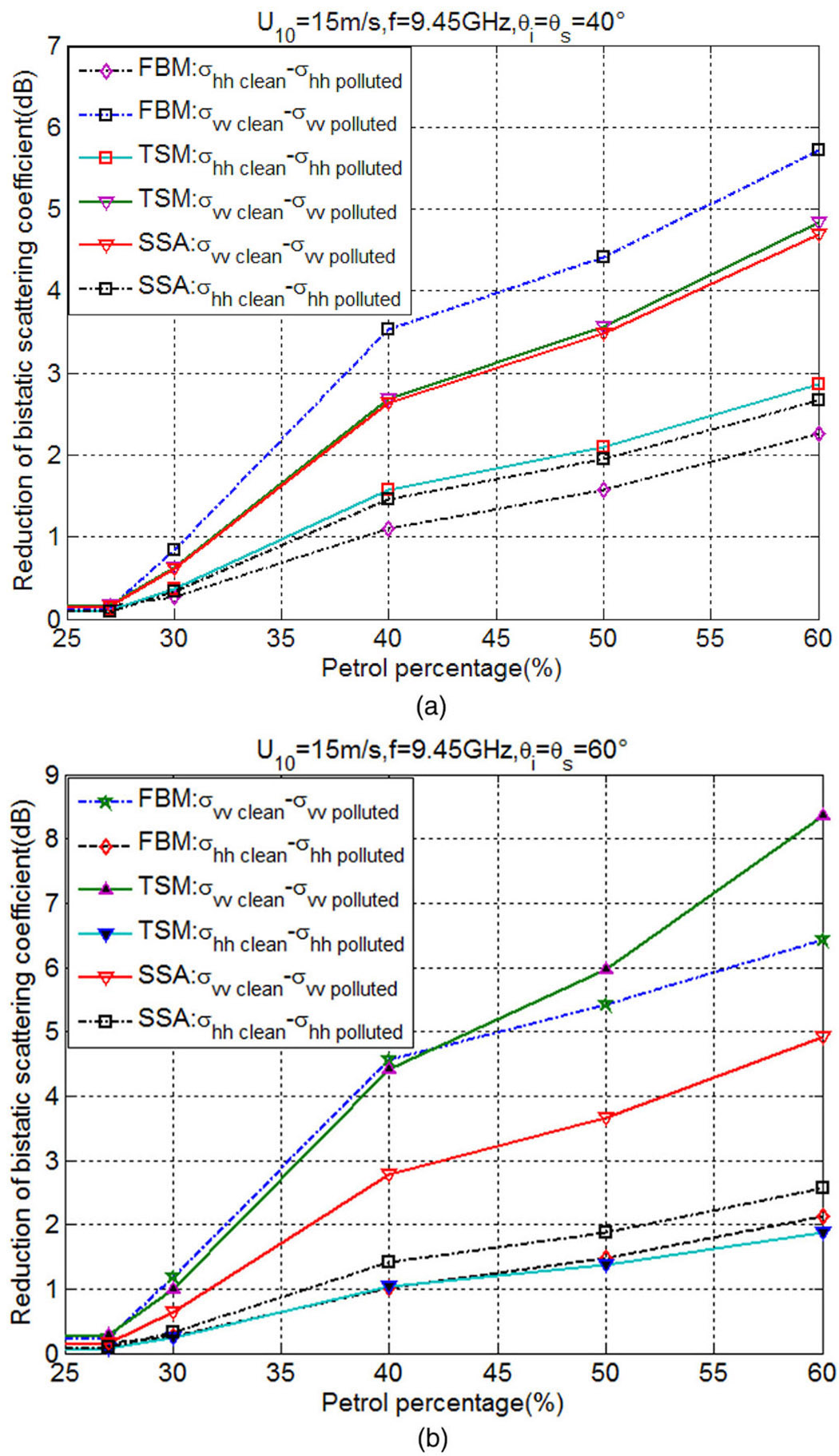 We have numerically simulated the influence of pollutants on the characteristic EM signatures of sea surfaces. The results of our simulations show that the presence of a pollutant layer creates a large difference (about 16dB) between the scattering coefficients of clean and polluted sea surfaces. Moreover, we have observed that the maximum difference between the scattering coefficients of a clean sea surface and one that has been polluted by emulsion is on the order of 9dB. We are now planning to further develop our work by considering other comparisons and evaluations with our experimental simulation results. In particular, we will be using experimental measurements that have been obtained within the framework of the European Union's Networked Systems for Situational Awareness and Intervention in Maritime Incidents (NETMAR) project.

Helmi Ghanmi received his MS in physics from the University of Maine, France, in 2012. He is currently a PhD student in the Radar and Electro-Magnetic Sensing team.

Ali Khenchaf has worked at ENSTA Bretagne since 2001, and he is currently a professor. He joined Lab-STICC in 2012, where he has co-responsibility for the Propagation and Interaction Multi-scales team.

Fabrice Comblet received his MS in electronics, electrical engineering, and automatics from the Science and Technology University of Lille in 2002 and his PhD in the electronics of biostatic synthetic aperture radar from the Université de Bretagne Occidentale, France, in 2005. He is currently an associate professor.