Taking high-resolution images and videos deep within tissues of the human body is currently one of the most exciting challenges of biomedical photonics. Through these methods, biologists, chemists, engineers, and physicists seek to systematically unlock secrets hidden by the complexity of cellular organization and functional connectivity. One particular target of interest is the human brain, the most complex object in the known universe. The brain carries an incredible amount of vitally important information brought about through hundreds of millions of years of evolution, with direct implication for understanding the nature and origins of humankind. On a more disconcerting note, this complexity also manifests as a huge societal challenge, since there is no known cure for severe brain diseases such as Alzheimer's. Above all else, it is the same complexity yet again that stands in the way of research progression.

Tissues of all organisms are opaque, highly scattering optical media, with rapidly varying and a priori unknown distribution of refractive indices. To address this challenge, institutions worldwide are developing new imaging methods that promise ever-higher resolution and tissue penetration depth, while optimizing speed, accessible volume, and phototoxicity—the qualities on which the new techniques are commonly rated. For all non-invasive imaging methods that allow in vivo observations, there appears to be a fundamental trade-off between resolution and penetration depth (see Figure 1). 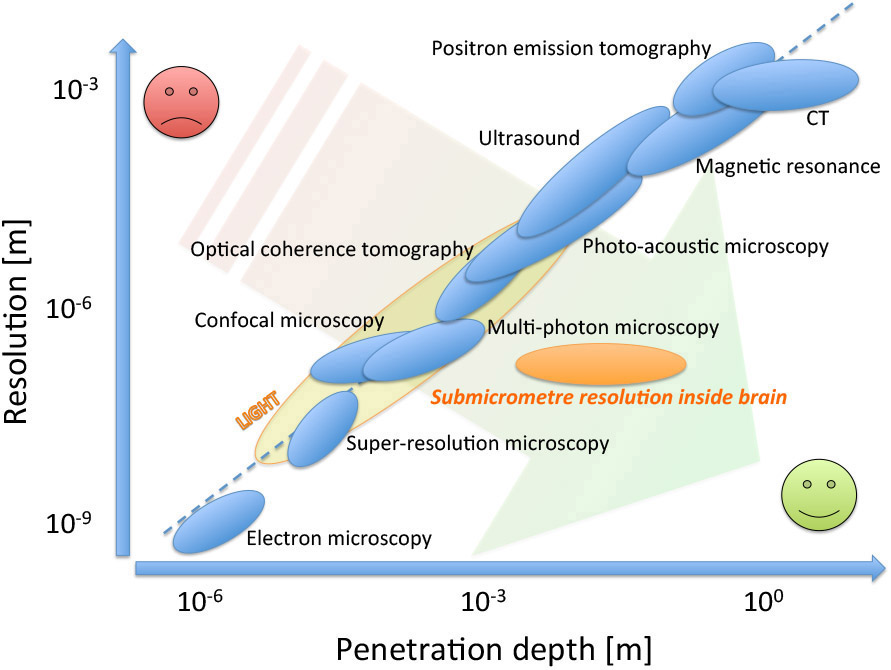 Figure 1. Trade-off between resolution and penetration depth for common methods of biomedical imaging.

Typical human and animal tissues are turbid in nature, therefore the best method available to take images at a certain depth can only resolve details about hundred times smaller. To monitor complex processes, such as the formation of memory, through several centimeters of randomizing tissue in the human brain, we would need to observe submicrometer structures of neurons. These are a hundred thousand times smaller compared with the typical penetration depth, which leaves an immense technological gap. Although researchers have developed some very powerful ideas based on controlled light propagation through turbulence,1–3 overcoming this barrier in a completely non-invasive manner seems to be far away in the future.

One imaging approach involves the use of endoscopes: narrow instruments transmitting light in and out of remote and otherwise inaccessible parts of the human body. Flexible endoscopes, also known as fiberscopes, rely on image transfer through optical fiber bundles. They are typically combined with a miniaturized objective or a gradient-index lens. These create an image on the input facet of a fiber bundle, which is then separated into individual guiding cores and delivered to the other side of the bundle, where the image is observed or recorded. Recently, biomedical researchers have used fiberscopes with cross-sections exceeding 1mm in diameter in the sensitive tissues of animal models. Combining this with transgenic approaches for cell-specific fluorescent labeling enables studies such as functionality of the visual or motoric cortex. However, the footprint of these instruments is too large to be introduced deeper into such sensitive tissues, particularly in cases where it is necessary to use awake animal models.

Our strategy to minimize the footprint of endoscopes introduces hair-thick multimode optical fibers as an image-guiding medium. Images are coupled into waveguides and transmitted by several concurring optical modes propagating at different phase velocities. Output optical fields are superpositions of such modes, which can couple light between themselves due to fiber curvature and other imperfections, and which feature highly complex and unpredictable phase relations. This leads to transformation of the image beyond recognition at distances as short as a few hundred micrometers.

To utilize such scrambled images, we exploited the principles of digital holography. Light transport processes within multimode waveguides are extremely complex, however it is possible to characterize them empirically. We can experimentally realize a convenient system of orthogonal optical modes—for example, diffraction-limited focal points—and couple them sequentially to the fiber. From the complex distribution of optical fields leaving the output facet we can build the so-called transmission matrix of the optical system. With this knowledge we can predict the outcome of any optical field being coupled into the fiber, or design any output optical field by pre-shaping the light at the input side (see Figure 2).

Phase-shifting of all the input modes simultaneously so that they interfere constructively at a selected point behind the fiber output facet leads to generation of a diffraction-limited focal point.4–6 Raster scanning of such focus leads to the most straightforward form of imaging. Researchers have previously demonstrated scanner-free alternatives,7, 8 increasing the speed9 and optimizing the achievable resolution.10 However, a critical drawback of these approaches was the lack of flexible operation. Any bending or looping of the fiber resulted in changes to the transmission matrix of the optical system, thus heavily impairing the image. If the optical fibers were in an entirely random optical media, there was little possibility of restoring the image quality.

Responding to this problem, we noted that the fibers feature an extraordinary cylindrical symmetry that we can very efficiently exploit. Our studies11 show that while the output fields appear entirely scrambled, we can predict both the transmission matrix itself and changes to it caused by fiber bending, with sufficient precision for the purposes of minimally invasive endoscopy.

As these technologies evolve, we will likely see new instruments capable of monitoring chronic and real-time behavior of individual cells within the complex structure of surrounding tissue. The new techniques will enable studies of differentiated or surgically transplanted neurons and stem cells in regions that are millimeters or centimeters below the surface of the cortex.

Technological progress will facilitate further interaction with the tissue by targeted photolysis and photoablation of cells, and may provide a new instrumental background for optogenetic approaches (see Figure 3). This would offer new experimental methods to study brain function, and may enable treatment of the most severe disorders and illnesses. 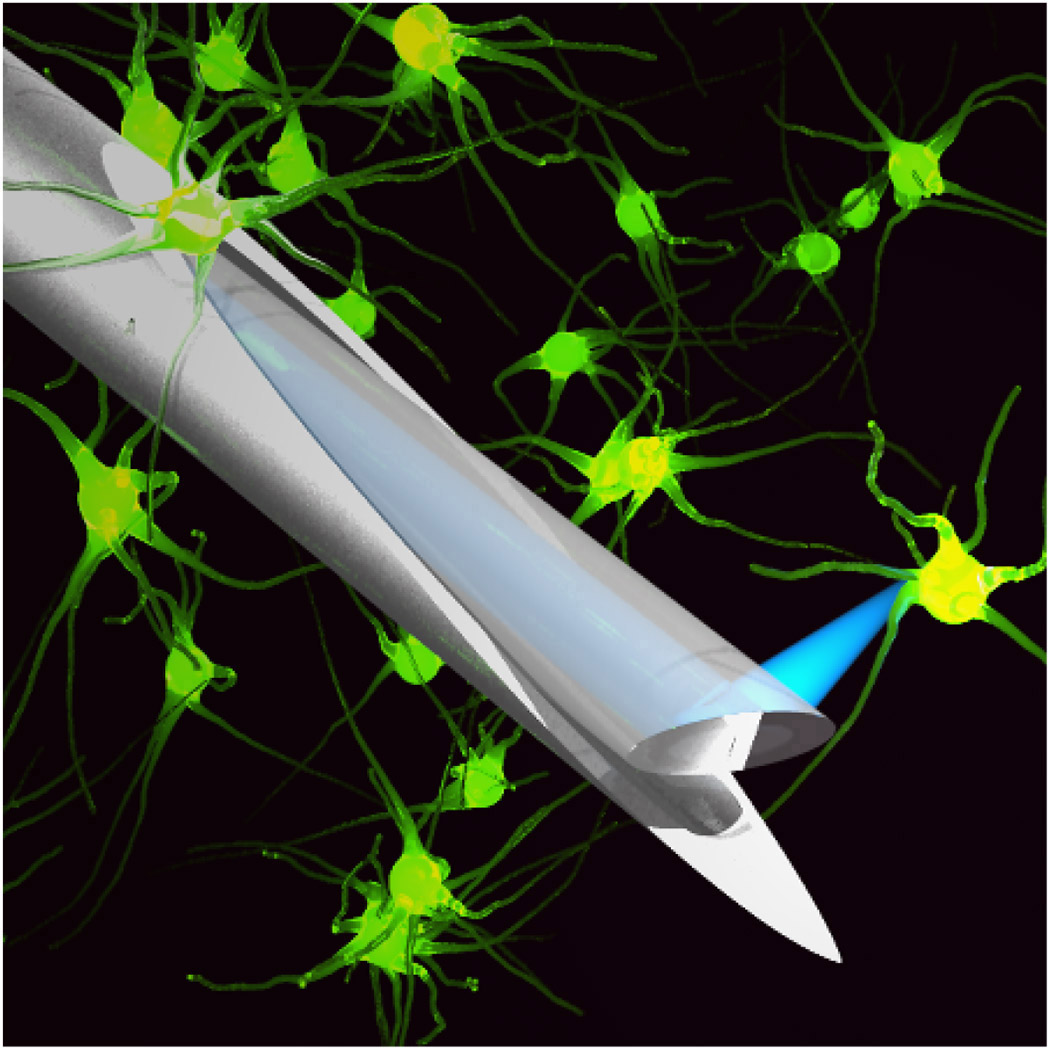 Our research is progressing towards the first biomedical applications, and we are currently focused on improving the resolution for rapid volumetric imaging.

The author acknowledges support from the Scottish Universities Physics Alliance.

Tomáš Čižmár leads the Complex Photonics group. During his scientific career he has taken part in a variety of interdisciplinary projects in biomedical photonics, mostly related to optical manipulation, digital holography, microscopy, and cell biology. His recent research activities are focused on photonics in complex environments.