A versatile formalism for optical simulation of textured sheets

Solar photovoltaic (PV) power generation is a driving force in the transition to renewable energy sources. However, to compete with fossil fuel or nuclear power in a free market, PV generation needs to be both environmentally friendly and cost-effective. Over the past decade, there has been an immense drop in the price of solar panels, resulting from economies of scale and decreased material costs. Nonetheless, there is still room to improve PV efficiency and thereby further reduce the price per watt peak (i.e., the PV facility's nominal power).

For silicon PV cells, which comprise about 90% of the solar cell market,1 surface texturing is a well-established approach to achieve high efficiencies. The textures can reduce surface reflectance and lead to longer light path lengths inside the silicon absorber. Both of these effects lead to higher absorptance and increased energy conversion efficiency in PV cells. State-of-the-art industrial fabrication, with wet chemical processes, enables the production of pyramidal textures for monocrystalline silicon substrates,2, 3 and isotextures for multicrystalline silicon.4 Optical simulation is an invaluable design tool for determining ideal textures or texture combinations, on both the front and rear sides of the PV cell. Novel light-trapping concepts are widely discussed in the scientific literature, but have not yet been realized in industry.5–10 These concepts may involve combinations of front- and rear-side textures operating in different optical regimes. For example, pyramidal textures have large dimensions compared with the relevant light wavelength, and it is therefore possible to treat them with ray-tracing methods. In contrast, diffractive gratings fabricated by nanoimprint lithography must be treated with wave-optics.11 With these conventional methods, however, it is challenging to accurately and efficiently simulate such structure combinations.

To address this problem, we have developed a formalism known as Optical Properties of Textured Optical Sheets (OPTOS).10 This is a matrix-based approach, with which we efficiently calculate parameters such as reflectance, transmittance, and absorptance of a thick optical sheet that has arbitrary surface textures on both sides. We simulate surface interactions and light propagation inside the textured optical sheet only for a discrete set of angles. This allows the light propagation within the system to be described by a power distribution vector (see Figure 1), which has one entry for every angle channel. Furthermore, every surface interaction can be represented by means of redistribution matrices (B and C), which are specific to a surface. 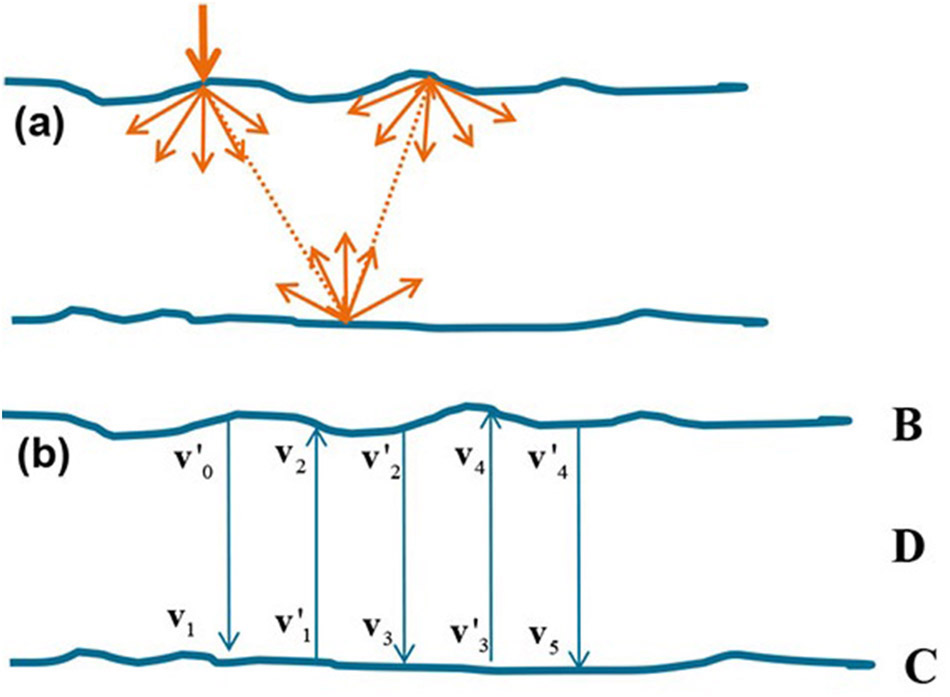 Figure 1. Sketch of an optical sheet with arbitrary surface textures. (a) The surface variations induce a redistribution of the incoming radiation. (b) A power distribution vector (v), based on a simulation of the surface and light interaction, describes light propagation within the system, with one entry for every angle channel.10B, C: Redistribution matrices. D: Propagation matrix.

These redistribution matrices need to be calculated only once for each type of texture (see Figure 2). We make these calculations using the most appropriate simulation technique, i.e., ray tracing for structures with large dimensions, and rigorous coupled wave analysis (RCWA) for smaller structures. The results for the front- and rear-side redistributions are then coupled non-coherently using a propagation matrix (D), which accounts for the light propagation and absorption in the sheet.

Figure 2. (Top) Sketch of a line grating in silicon (Si), surrounded by air and a perfectly reflecting mirror.10(Bottom) 2D redistribution matrix of the line grating. θin, θout: Angles of light propagation in and out of the cell.

We can obtain the quantity of interest—for solar cells this is usually the total absorptance inside the silicon bulk—using matrix multiplications. We can do this with very low computational effort. An example calculation for a silicon sheet with thickness varying between 250μm and 50μm with V-Grooves (simulated by ray tracing) at the front, and a planar or diffraction grating on the rear side (simulated by RCWA) is shown in Figure 3. For this structure combination we concluded that the integration of the diffractive grating into the solar cell architecture would lead to a light-trapping enhancement and thereby an increased efficiency. 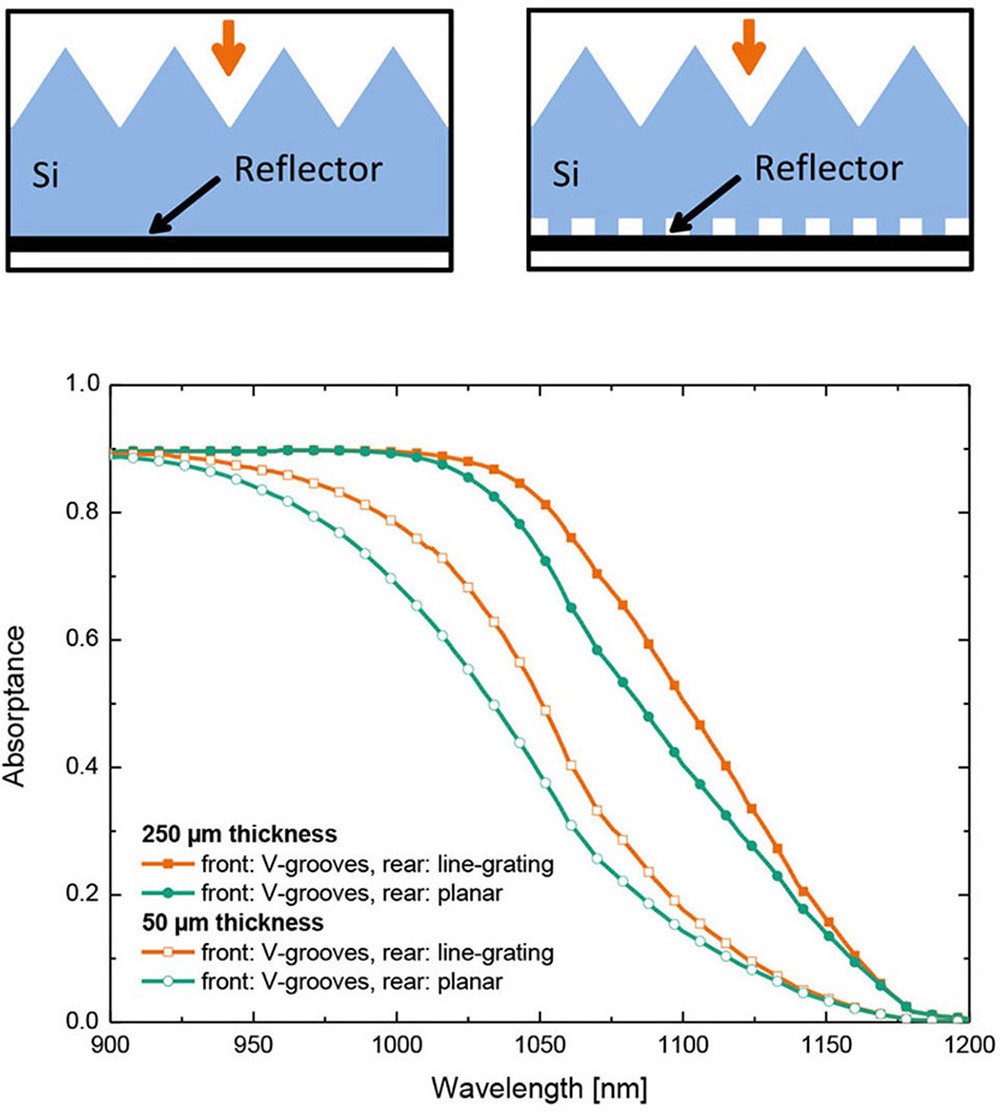 Figure 3. (Top) Sketches of silicon sheets that have different thicknesses. The sheets have a V-grooved front side, as well as either a rear-side grating or a planar rear, both of which are combined with a perfect reflector.10(Bottom) Absorptance data for the two Si sheets.

A further advantage of our OPTOS formalism is that once the redistribution matrices are established, they can be re-used. In just a few seconds or minutes, we can carry out calculations for a sheet with thickness variations, without requiring new ray-tracing or RCWA methods. It is also possible to interchange the redistribution matrices to investigate different structure combinations, and therefore to achieve maximal absorptance.

In summary, we have developed a matrix-based formalism to obtain the total absorptance inside a silicon solar cell. Using this approach, we are also seeking innovative surface textures or texture combinations that enable the highest solar cell efficiencies. In this way, we aim to achieve a reduction of cost per watt peak, and ultimately a faster transition towards renewable power generation. Moreover, our formalism is not restricted to simulation of the absorptance of textured solar cells. We can extract other quantities, such as reflectance or transmittance. We can also investigate more than two textured surfaces incorporated in one system (e.g., in a complete solar module). Beyond PV, our work will now focus on applying our approach to other fields. These may include display technology (e.g., in brightness enhancement films, as well as diffusing or polarizing elements) or lighting applications.