The human brain comprises tens of billions of neurons connected to each other through quadrillions of synapses in a soft network. Any breakdown in communication within this network could manifest as a debilitating neurological or psychiatric condition. Neural probes in use today often fail to communicate with neural tissue across its signaling palette for extended periods of time, limiting our ability to understand the dynamics of neural circuits and treat diseases of the nervous system.1 Most recording electrodes able to interface with neurons below the surface of the brain are based on metals and semiconductors. The elastic moduli of these materials exceed those of neural tissues by several orders of magnitude, causing chronic tissue damage and evoking a foreign body response.2

Advances in optogenetics,3 a method enabling optical control of specific neurons through the genetic introduction of microbial light-sensitive ion channels, have generated a demand for the incorporation of optical or optoelectronic devices into neural probes. In addition to optogenetic stimulation, the ability to deliver drugs that modulate neural activity or viral vectors for genetic manipulation would greatly benefit mapping neural circuits and therapeutic approaches for psychiatric and neurological diseases.4 This, however, involves integrating microfluidic features into the probes, which further increases device dimensions and overall stiffness.

Conventional silica optical fibers are routinely used in optogenetic experiments to deliver light into deep brain structures.5 However, they lack electrical recording or drug delivery capabilities, and mechanical stiffness limits their chronic use as well as applications outside the brain. LeChasseur and coworkers used custom-drawn glass-based devices for simultaneous acute optical stimulation and electrical recording in the brain,6 but their stiff capillary-like designs were not suitable for chronic implantation. To address the biocompatibility issues of existing probes and enable optoelectronic and chemical interrogation of neural circuits, we have leveraged a thermal drawing technique traditionally used in telecommunications and photonics research to produce composite fibers to create flexible, polymer-based probes.7 We achieved simultaneous electrical recording and optical stimulation of neural activity during drug delivery into the brain of freely moving mice,8 as well as optoelectronic interrogation of spinal cord circuits and control of lower limb muscles.9

In our technique, we first prepared the preform: a template incorporating all the desired materials and functional features into the geometry of the final structure. This macroscale template was heated and stretched into hundreds of meters of fiber with a cross-sectional geometry that was a scaled-down version of the preform. Only materials with similar glass transition or melting temperatures and viscosities can be drawn within one fiber. While the draw-down ratios for a single draw can reach ∼200, multiple drawing steps can enable ∼106-fold feature reduction.10 We selected two low-modulus materials systems based on their processing temperatures. To produce multifunctional probes capable of simultaneous electrical recording and optical stimulation, we used two transparent polymers, polycarbonate (PC, refractive index nPC=1.58) and cyclic olefin copolymer (COC, nCOC=1.53), for the waveguide core and cladding and conductive carbon-doped polyethylene for the electrode material: see Figure 1(a–c). We achieved simultaneous drug delivery by introducing hollow channels: see Figure 1(a, b). 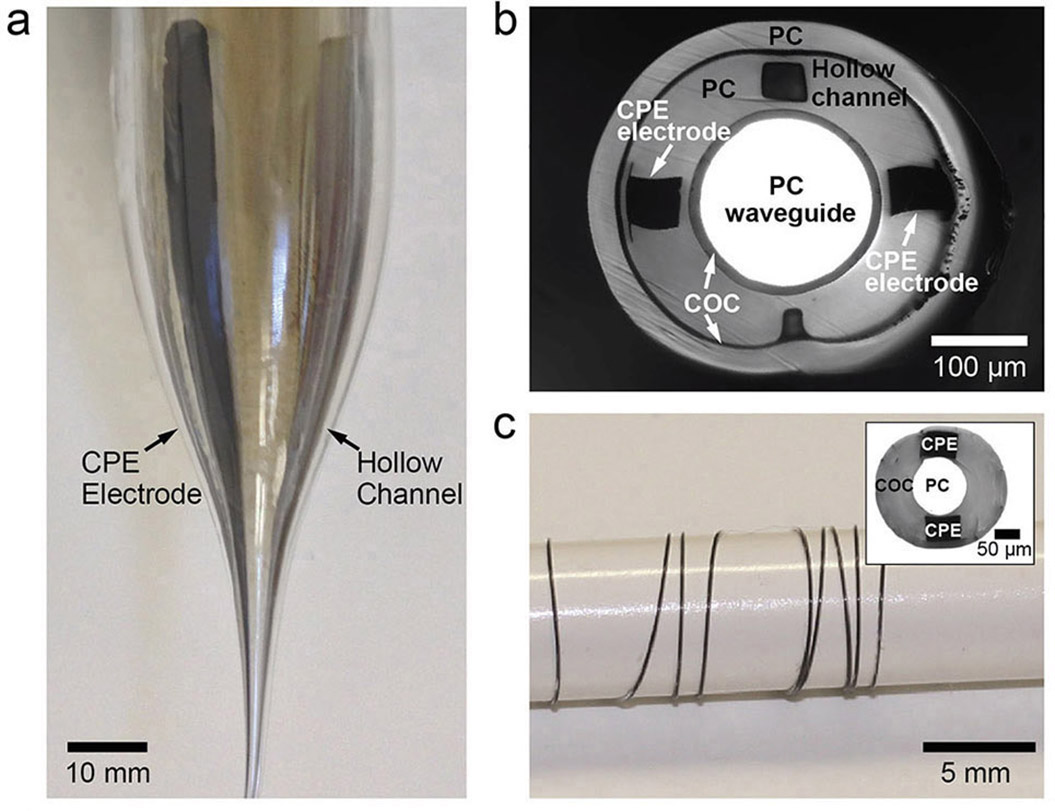 To demonstrate simultaneous electrical, optical, and chemical interrogation, we implanted our multifunctional fiber probes into the medial prefrontal cortex of transgenic mice whose neurons can be activated by pulses of blue light (473nm) due to the expression of channelrhodopsin 2, an optically sensitive sodium channel. Figure 2(a) shows action potentials robustly fired in response to light pulses. The amplitude of the neural activity, however, decreased with the infusion of a synaptic blocker—6-cyano-7-nitroquinoxaline-2,3-dione (CNQX)—which diminishes overall activity within the neural circuit. The neural activity then recovered as the drug dissipated through the perfusion of cerebrospinal fluid within the brain. The ability to monitor neural activity during stimulation and drug delivery is indispensable in systems neuroscience, which aims to link neural activity to behavior and investigate the roles of neuromodulatory compounds. 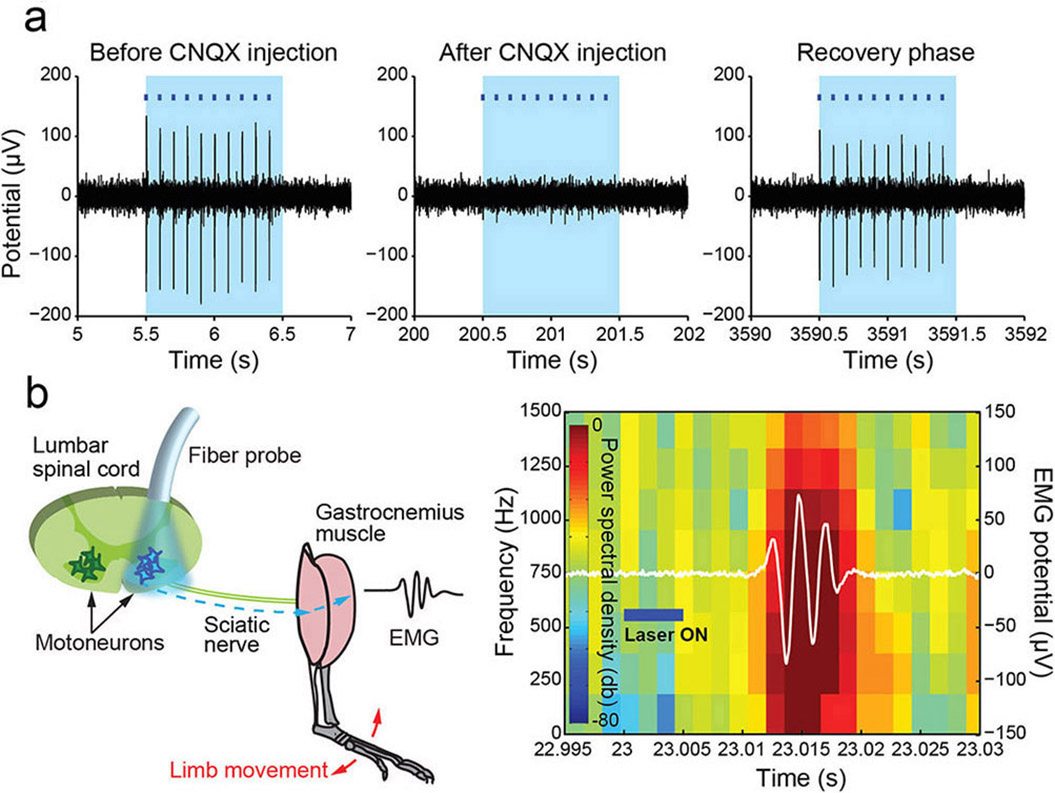 By eliminating the microfluidic capability and further reducing the device dimensions, we developed highly flexible devices that maintained optoelectronic functions over multiple cycles of 180° bending deformation at 2mm radius of curvature. These highly miniaturized optoelectronic fiber probes allowed optical control of locomotor activity correlated to neural excitation in the spinal cord—see Figure 2(b)—which was monitored by the same device, bringing us a step closer to designing neuroprosthetic devices for patients living with a paralyzing spinal cord injury.

While polymer composite electrodes enable electrical recording of small groups of neurons, applications such as brain mapping and brain-machine interfaces require scalability to thousands of electrodes without dramatically increasing the device footprint. Consequently, the electrode dimensions need to be reduced to the scale of individual cells while maintaining the electrode impedance within a useful range (100skΩ to a few MΩ). We accomplished this by combining tin electrodes with poly(etherimide) and poly(phenylsulfone) claddings in a two-step drawing procedure: see Figure 3(a, b). Arrays of up to 36 of these electrodes (each having a diameter of ∼5μm) allowed recording of the activity of multiple individual neurons with an average signal-to-noise ratio (SNR) of 13 and a maximum SNR of 20: see Figure 3(c, d). 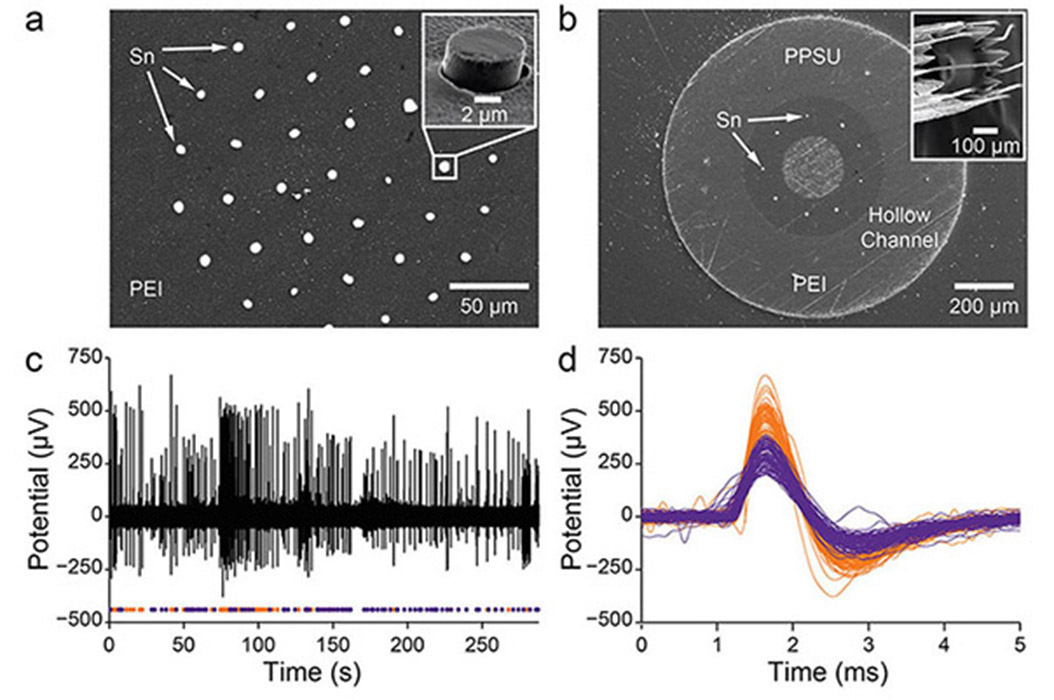 Our preliminary biocompatibility studies indicate that these polymer-based fiber probes produce minimal foreign body response within neural tissue. Therefore, in the future, this technology could be applied in long-term experiments that aim to clarify the neural circuits governing complex behaviors such as learning, habit formation, and decision making. Future developments in fiber probe technology may also enable the incorporation of additional features for mechanically or chemically probing cellular dynamics within the nervous system. These probes are flexible and biocompatible and, therefore, show promise for applications concerning not only the brain and spinal cord but also peripheral nerves. They could be used to realize multifunctional interfaces to prosthetic limbs or for the neuromodulation of organ function.

Within our group, we intend to continue advancing polymer fiber technology by introducing novel biocompatible and bioresponsive polymers, increasing the resolution of recording electrodes, as well as addressing engineering challenges such as packaging and connectorization. In addition, we look forward to collaborations with systems neuroscientists and neurophysiologists to tailor our fiber-based tools to specific neurobiological questions.

Polina Anikeeva is a Class of 1942 Assistant Professor at the Department of Materials Science and Engineering and a principal investigator of the Bioelectronics Group within the Research Laboratory of Electronics at MIT. She develops optoelectronic and nanomagnetic approaches for recording and manipulating neural activity and development.