The development of 2μm pulsed laser sources has enabled their rapid growth in applications for material processing, gas sensing, LIDAR (light detection and ranging), and medical treatment. These increasingly attractive laser sources can be used to extend source wavelengths further into the mid-IR and IR regions via nonlinear frequency conversion.1 This is of benefit for many types of research studies, including spectroscopy, frequency combs,2 supercontinuum generation,3 and dielectric laser-driven particle acceleration.4 There is a potential of generating femtosecond pulses with thulium-doped fiber lasers. This capacity is caused by their broad gain bandwidth, which spans from 1.7 to 2.1μm. These lasers also feature a cross-relaxation process, whereby the quantum efficiency can reach a value of about two (when pumped at 790nm). In the context of short-pulse generation, operation of these lasers at 2μm—rather than at 1μm—can reduce the effective Kerr nonlinearity by a factor of eight in single-mode fibers. It should thus be possible to generate high-energy femtosecond pulses with thulium (Tm) fiber lasers. Furthermore, such devices would have several potential uses in scientific research and real-world applications.

To date, the highest-energy pulses that have been produced with femtosecond fiber lasers have been obtained in the normally dispersive regime. This has involved—for both ytterbium and erbium lasers—the use of dissipative soliton (DS)5 or self-similar (SS) evolutions. Such lasers now have the potential to compete with solid-state systems. Although there have been attempts to develop high-energy 2μm pulses by shifting the laser cavity dispersion into the normal regime, the results of these endeavors have been quite limited.6–8 In addition, the performance of these devices lags behind those that operate at shorter wavelengths. The main challenge in this development of high-energy femtosecond lasers is caused by the anomalous dispersion of most silica fibers at about 2μm.

We have therefore designed a new laser, in which we use ultra-high numerical aperture (NA) fibers with small cores. These fibers can provide normal dispersion at 2μm, as the waveguide dispersion overcompensates the material dispersion. We use these fibers in our design because they are flexible and easy to implement, and because we do not have to sacrifice the practical benefits of fibers by resorting to a telescope-grating system.7 We use the ultra-high NA fibers on both sides of an anomalous-dispersion Tm gain fiber (a normal-dispersion gain fiber is not commercially available), as illustrated in Figure 1, and ordinary single-mode fibers for the rest of the cavity. We also require a spectral filter and a saturable absorber (SA) to stabilize the pulse evolution and initiate the mode-locking process, respectively. In our setup, the output of the laser is taken after the SA, so that we achieve maximum efficiency and obtain the broadest spectra. 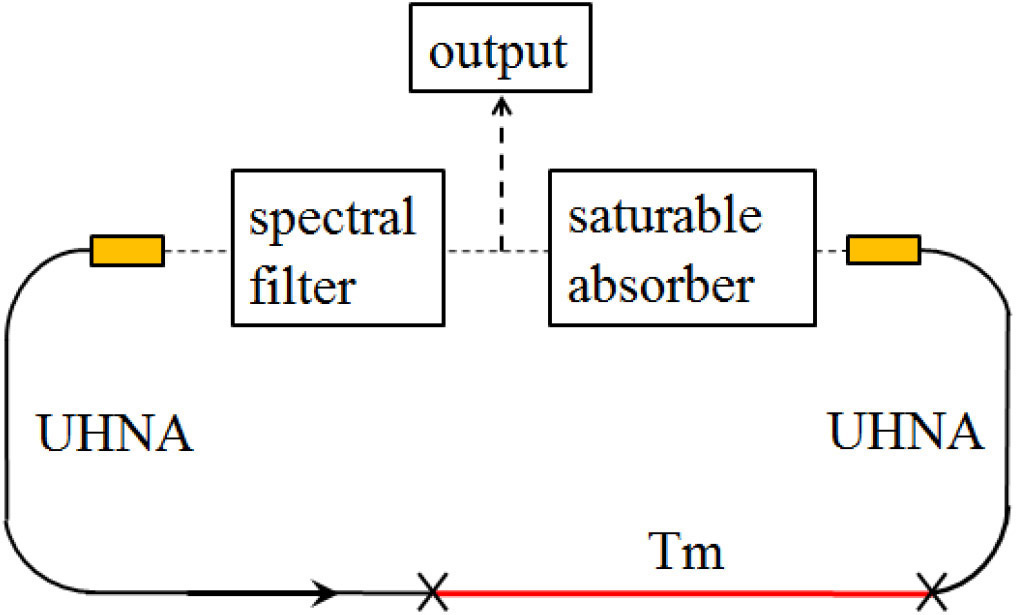 We have conducted a set of simulations for our new laser design. In these tests we simulated a cavity with a large net dispersion (about 0.3ps2) and a typical converged pulse evolution (as shown in Figure 2). We find that the pulse propagation is mainly dominated by the spectral filter, with only minimal contribution from gain filtering. In contrast with static dissipative solitons, the pulse duration and spectra bandwidth breathe by a factor of five as the pulse traverses the cavity. The pulse broadens in the high-NA fibers, and it compresses in other parts that have anomalous dispersion. In addition, the pulse is positively chirped and it remains far from the transform limit throughout the cavity. These features are all qualitatively similar to those of a passive SS laser.9 Furthermore, the strong spectral breathing contrasts with that in a passive SS laser, but it is also similar to the feature of lasers with SS evolution in the normal gain segment,10, 11 which is not the case for our laser. 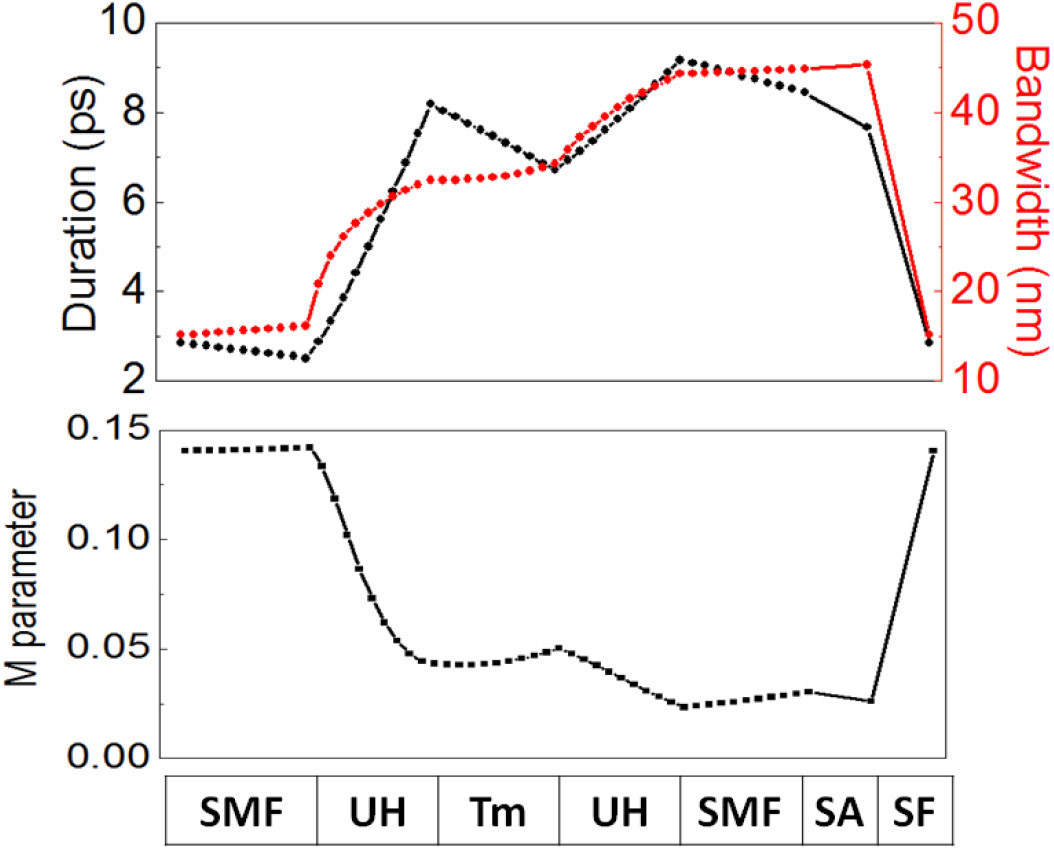 Figure 2. Results from simulations of a laser cavity with a large net dispersion and a typical converged pulse evolution. The pulse duration and spectral bandwidth values are illustrated in the top panel, and the pulse shape evolution is illustrated in the bottom panel. The pulse shape evolution is given in terms of the misfit parameter (M), which is the root-mean-square deviation of the pulse shape from a parabolic pulse with the same energy. SMF: Single-mode fiber. UH: UHNA fiber. Tm: Thulium-doped gain fiber. SA: Saturable absorber. SF: Spectral filter.

We define the misfit parameter (M) as the root-mean-square deviation of the pulse shape from a parabolic pulse with the same energy. For a Gaussian pulse, M is 0.14 and for a perfect parabola it is 0. We observe that the pulse reshapes dramatically in the first segment of the ultra-high NA (UHNA) fiber, whereas it approximates a parabola closely (M is about 0.02) after the second UHNA segment, until it is filtered. The dispersion map hinders the formation of dissipative solitons, even with large normal cavity dispersion. This pulse evolution is a hybrid, or intermediate regime, between passive SS and DS evolutions. It is also a consequence of the joint action of the strong dispersion map and the filter.

Following our design (see Figure 1), we have built and tested our UHNA laser. In our experiments, the laser successfully emitted 7.6nJ and 3ps chirped pulses, which we can dechirp to 130fs outside the cavity (see Figure 3).12 The chirp we achieve on the output pulse is much smaller than the cavity dispersion, which is also a signature of the SS propagation. After the dechirping, the peak power we obtain is about 40kW. This is four times the peak power of previous Tm fiber lasers. By making minor adjustments of the waveplates within the cavity, we believe that the pulse energy can be increased to 8.3nJ, with 150fs dechirped pulse duration. 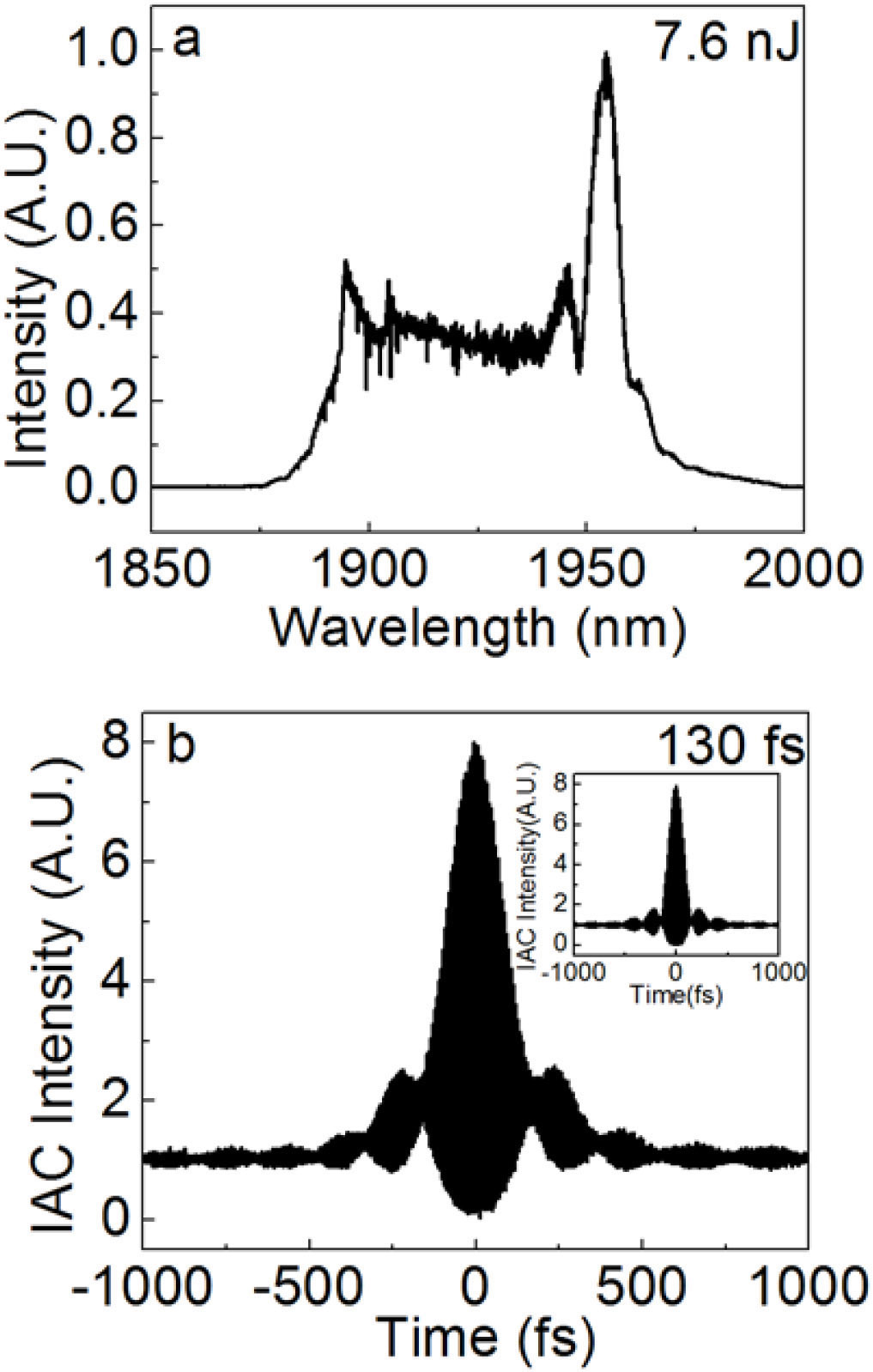 We have designed and built a new ultra-high NA Tm fiber laser. Using this laser—with hybrid SS evolution—we can generate high-energy pulses, which can be dechirped very close to the transform limit. We are unable, however, to achieve DS operation because of the unavoidable introduction of the dispersion map. Our laser pulses are the shortest yet achieved, with the highest energy, in the dispersion regime. In addition, our device is the first Tm-based laser in which the benefits of operating with normal dispersion are exploited. In the next stages of our work we plan to use a normal-dispersion Tm gain fiber13 to build an all-normal-dispersion Tm laser and thus to ultimately increase the pulse energy.

This work was supported by the National Science Foundation. The authors thank Logan Wright and Walter Fu for helpful discussions.