Mapping the performance of solar cells with nanoscale resolution

Harnessing energy from the sun is a sustainable way to provide for the world's consistently growing energy needs. A high-efficiency and low-cost photovoltaic (PV) methodology, however, is still the ‘holy grail’ that could potentially replace fossil fuel-based technologies. Although single crystalline PV materials generally outperform polycrystalline substances, the high cost associated with their epitaxial fabrication methods remains a barrier to effectively deploying this technology.

A potential alternative is the use of low-cost and large-scale manufactured polycrystalline materials. Such materials include cadmium telluride (CdTe) and copper indium gallium selenide (CIGS)—CuInxGa(1−x)Se2, where x can vary from 0 to 1—which have record-breaking power conversion efficiencies of more than 20%.1 Nevertheless, improvements to power conversion efficiencies are still required to ensure that there is a low cost-to-power output ratio. These polycrystalline materials are composed of grains (about 1μm in size) whose boundaries induce microscopic dislocations, vacancies, and interfaces with distorted bonds. The resulting extra electronic states can strongly affect the recombination and transport properties of majority and minority charge carriers, and thus the overall performance of the polycrystalline devices. Although macroscopic light current–voltage (I–V) measurements can be extremely useful for determining the overall performance of a device, a nanoscale imaging spectroscopy method is still missing. Such imaging would allow the local optical and electrical responses of the different grains and boundaries that compose the polycrystalline PV devices to be spatially resolved.

In this work we present new imaging methods that are based on scanning probe microscopy. With these methods we can map two key parameters that we can use to define the performance of optoelectronic devices at nanoscale spatial resolutions. We use a near-field scanning optical microscopy (NSOM) probe as a localized source of illumination and excitation (see Figure 1) and can thus spatially resolve the open-circuit voltage (Voc)2 and the external quantum efficiency (EQE)3 of PV devices. These figures of merit are an indirect measure of the charge carrier recombination and collection within a material, respectively. We keep the distance between the probe and the sample surface so that it is considerably less than the wavelength of the light. We are therefore able to map the functionality of solar cells with true nanoscale resolution. 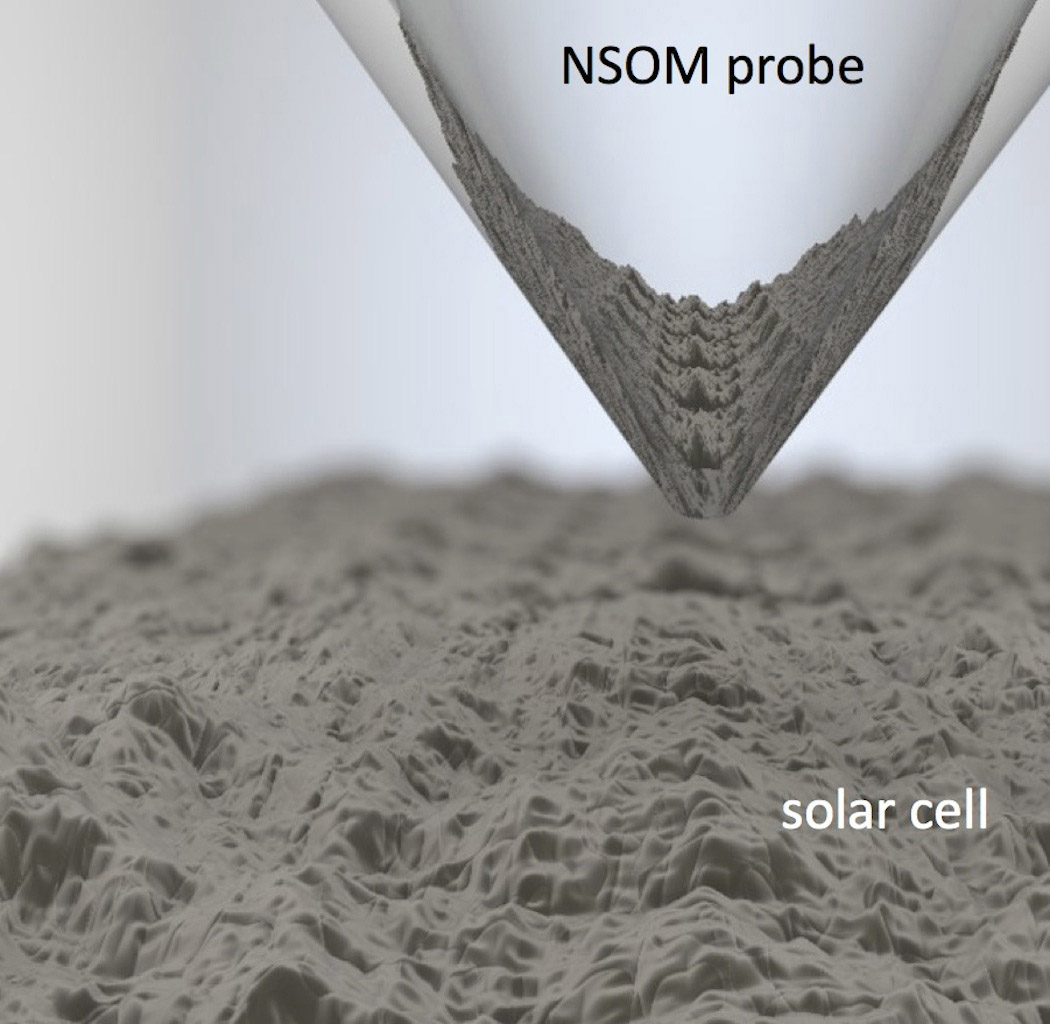 Figure 1. Illustration of a near-field scanning optical microscopy (NSOM) probe being used as a local excitation source. This methodology can be used to investigate light–matter interactions within polycrystalline solar cells, with nanoscale spatial resolution. With this technique, the optical and electrical responses of the grains that constitute a low-cost photovoltaic device can be resolved down to the nanoscale.

At present, the Voc—the maximum voltage that is available from a PV device, and an indirect measure of radiative recombination (photon emission) within the material—of CdTe and CIGS polycrystalline solar cells is the main limitation to their use. The Voc values of established PV materials are considerably below theoretical predictions.4 This is a direct consequence of their high dark-current densities. We can use our new technique, however, to resolve local Voc variations within grains and along grain boundaries, which cannot be resolved with macroscopic light I–V measurements. As such, we are able to reveal how the different types of interfaces that compose the thin films affect the recombination processes within the material.

We have conducted a set of experiments in which we implemented illuminated Kelvin probe force microscopy (KPFM)5, 6 to measure local Voc variations on a PV device, with nanoscale spatial resolution.2, 7 With KPFM—a variant of atomic force microscopy—we can measure the difference in work function between the scanning probe tip and the surface of the solar cell. During illumination, the change in work function is proportional to the quasi-Fermi level energy splitting of the device. The potential difference between the dark and illuminated KPFM scans therefore corresponds to Voc. With these tests we were able to spatially and quantitatively resolve variations in Voc (ΔVoc). The ΔVoc image (see Figure 2) shows that certain grain boundaries (i.e., with ΔVoc less than 0) act as centers for non-radiative carrier recombination and cause the total Voc of the device to decrease. Other boundaries (with ΔVoc equal to 0), however, behave in a similar way to the grains that compose the thin film and they do not degrade the device. Furthermore, once our experimental setup was calibrated, it was possible to infer the absolute Voc value and to resolve variations with a spatial resolution of less than 100nm. 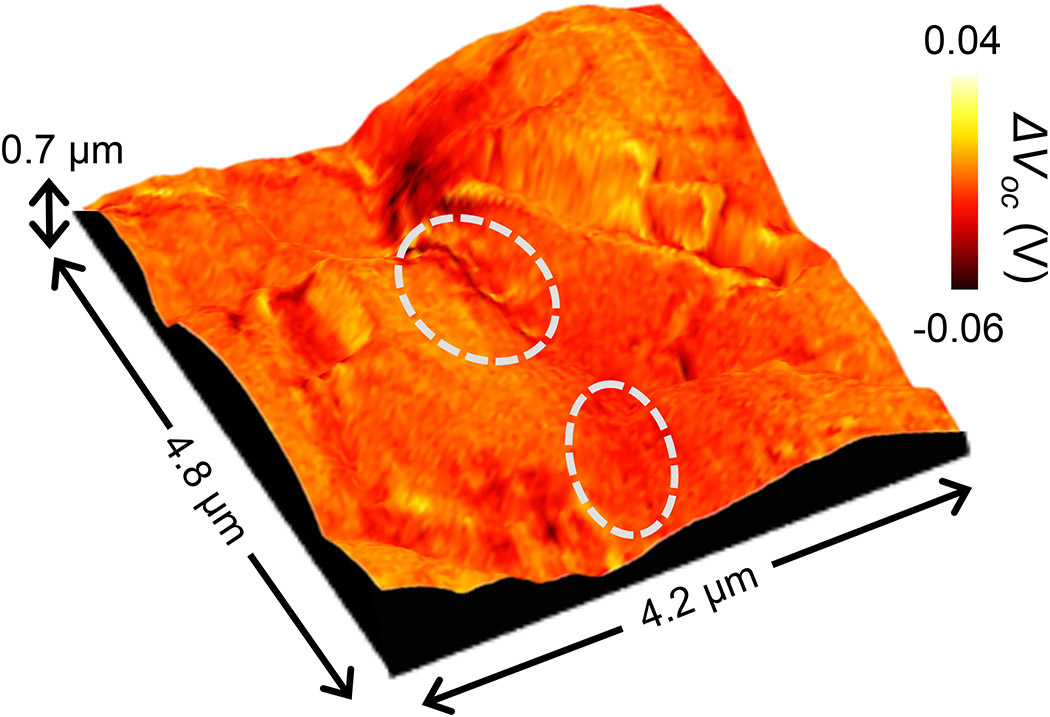 With our realization of nanoscale EQE measurements, we are able to probe how the boundaries within polycrystalline solar cells affect charge transport. Measuring the EQE of the devices is important because it dictates what fraction of local charge carriers are excited and subsequently collected via the electrical contacts. We illuminate the device with selected wavelengths through our NSOM probes so that the EQE can be spatially and spectrally resolved (see Figure 3). Our nanospectroscopy method thus yields information regarding the generation and collection efficiency of electronic charge within the polycrystalline grains. With this knowledge we can correlate electrical and structural properties so that higher-performance next-generation devices can be engineered.

Figure 3. Map of effective external quantum efficiency (EQE) overlaid on the topography of a CdTe solar cell. These measurements were acquired using an NSOM probe (diameter of 200nm, illumination source of wavelength 850nm) as a local source of excitation. The EQE is consistently higher at the grain boundaries than at the cores. This indicates that charge carriers are preferentially transported via the interfaces between grains.

We have demonstrated a novel spectroscopy technique with which we achieve unprecedented spatial resolution. We can use this approach to probe the local optical and electrical response of heterogeneous materials that compose polycrystalline solar cells. It should be possible to adapt our nanoscale imaging method to any PV material (e.g., perovskites and rare-earth-abundant solar cells). In addition, our technique is non-destructive and can function in an ambient environment. Our metrology can also provide the local optoelectronic response of single nanostructures that comprise PV devices, which cannot currently be resolved. We anticipate that our spectroscopic method—by resolving precisely where charge carrier generation, recombination, and collection occur—will substantially advance understanding of the fundamental processes that govern the performance of solar cells. In the future, we plan to extend this spectroscopy technique to include nanoscale resolution mapping of all the critical solar cell parameters, including fill factor and power conversion efficiency. Ultimately, we will relate these acquired functionality maps to the macroscopic characteristics of the polycrystalline devices so that higher-efficiency solar cells can be designed.

Elizabeth Tennyson received her BS in physics from the University of Wisconsin, La Crosse, and is now a PhD student. In her research she uses high-resolution scanning probe microscopy to investigate the optoelectronic properties of polycrystalline photovoltaic devices. She is also a SPIE student member.

Marina Leite is an assistant professor. She is currently developing methods to image the functionality of optoelectronic devices with nanoscale spatial resolution. Her research group also works on all-solid-state batteries and plasmonics.