Soft organic-based materials, such as polymer-based optoelectronic composites and thin-film devices, are very attractive for future clean and renewable solar cell applications. Plastics have intrinsic advantages, such as a low manufacturing cost, minimal environmental toxicity, potential for renewability (i.e., feedstock raw materials can be from crops), lightweight and flexible properties, and high light absorption.1, 2 However, the energy conversion efficiencies of current plastic-based optoelectronic devices are still relatively low compared to their inorganic counterparts.

It has been established that a molecular interface between electron donor and acceptor composite materials (known as a D/A binary system) is essential in polymer-based optoelectronic devices,1, 2 and that the energy difference between the lowest unoccupied molecular orbitals (ΔLUMO) of the donor and acceptor is a key driving force for photoinduced exciton dissociation, or charge separation. This is a crucial step in the operation of an organic optoelectronic device, as this is how photons are turned into charge in such systems. Naturally, one would tend to assume that the bigger ΔLUMO, the greater the force and the faster or more efficient the exciton dissociation. This is similar to driving a car, where the more you push the gas pedal, the faster the car is expected to move. Much existing literature has speculated that ΔLUMO should be at least 0.3eV to cause efficient exciton dissociation.1 However, would larger ΔLUMO values result in more efficient exciton dissociation?

In earlier theoretical studies, the correlation of exciton dissociation rates versus the ΔLUMO were analyzed based on the Marcus electron transfer model.1–3 Those studies predicted that an optimal ΔLUMO for efficient exciton dissociation could exist. Time-resolved microwave conductivity studies on a series of polymer/fullerene thin-film organic optoelectronic devices have shown an optimum driving force for the highest conductivity.4 For materials that exhibit photoluminescence (PL), this disappears when the photogenerated exciton dissociates: a phenomenon called PL quenching. This means the faster excitons dissociate, the more severe the PL quenching. The magnitude of the effect can be quantified by the Stern-Volmer PL quenching coefficient, Ksv, which can be measured in solution.5 This correlation between Ksv and ΔLUMO could also be used to verify earlier theoretical predictions.

In our recent experiments, we systematically investigated a series of polymer/dye pairs, in which for the same polymer—poly(3-hexylthiophene-2,5-diyl), P3HT—the effects of combination with a series of dyes are studied (see Figure 1). Dye molecules with similar chemical structures are used to make the ΔLUMO correlation comparisons more accurate. We first measured the frontier orbital levels of both the polymer and the dyes, using electrochemical methods combined with UV-visible spectroscopy. We found that P3HT and three dyes—protoporphyrin, Proto; chloro(proto-porphyrinato)iron(III), Hemin; and meso-tetra(4-carboxyphenyl) porphine, TCPP—form desired donor/acceptor pairs for photoinduced exciton dissociation, with differing ΔLUMO. We then measured the Ksv of P3HT when quenched by these three dyes. In addition, since light absorption also affects solar cell device efficiency, we measured the molar absorption coefficients (ε) of the three dyes. Finally, we fabricated solar cells using the three P3HT/dye pairs combined with a common acceptor, phenyl-C61-butyric acid methyl ester (PCBM), under identical conditions. 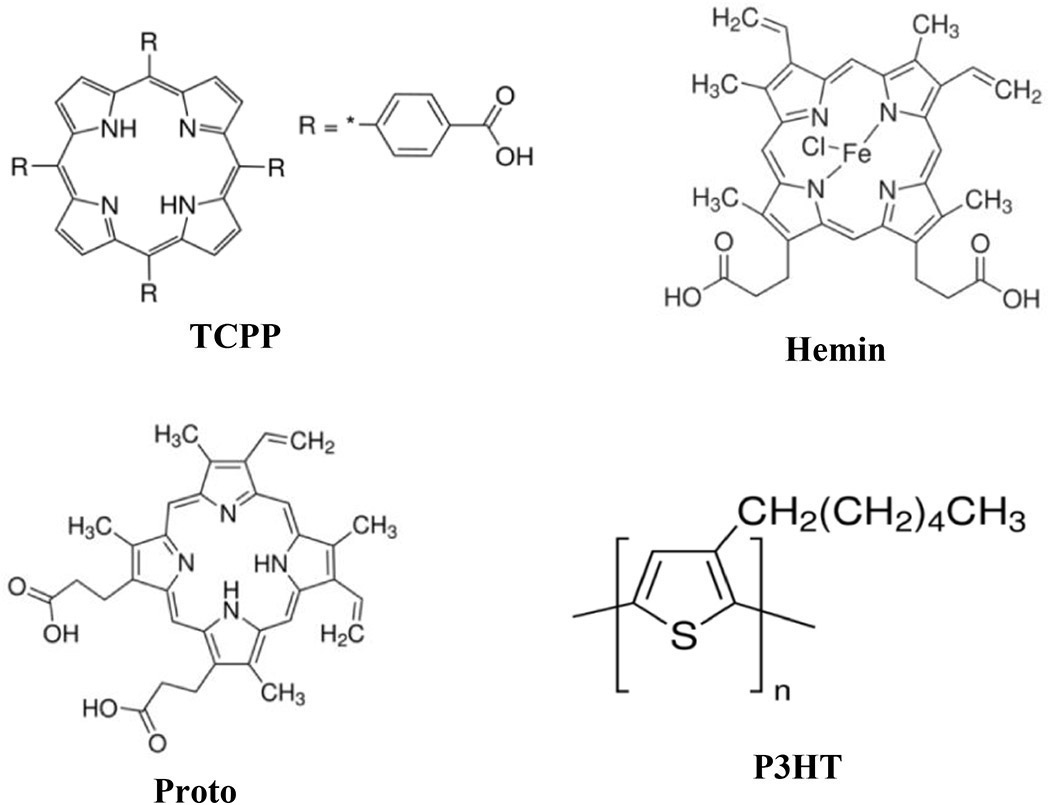 When we compared the properties of composites of the three dyes (see Figure 2) we found that the ΔLUMO values of P3HT/dye pairs increase from 0.46 to 0.76 to 0.84eV from Proto to Hemin to TCPP, respectively, i.e., the charge separation driving forces are increasing. However, the PL quenching, as well as the solar cell efficiency, does not show the same trend. Instead, it initially increases between Proto and Hemin, and then drops for TCPP.

Interestingly, this study revealed that, for the three P3HT/dye pairs, the photogenerated excitons appear to dissociate most efficiently at an intermediate ΔLUMO value. This observation appears to confirm the earlier theoretical prediction,3 and could be additional evidence for an ‘inverted region’ as seen in the Marcus electron transfer model.6, 7

Our experimental results demonstrate that the optoelectronic conversion efficiencies for the three P3HT/dye pairs tested are affected more critically by their PL quenching properties than their absorption coefficients.8 The relationship of PL to ΔLUMO for the P3HT/dye curve appears to follow the Marcus electron transfer model, including an inverted region. Trends observed here could be very useful to guide the design and development of future-generation high-efficiency molecular- or polymer-based optoelectronic devices, including solar cells and photodetectors.

Our group is currently investigating more dyes with the same or similar core chemical structures, but different frontier orbitals, to further confirm the observed trend. We are also looking into covalently attaching Hemin to P3HT. This will allow us to create a more uniform interface between the donor and acceptor, and give greater control over solid-state device morphology. As we demonstrate here, the nature of the donor-acceptor interface is key to optoelectronic performance.

Sam-Shajing Sun obtained his PhD in chemistry from the University of Southern California in 1996. He is currently a professor of chemistry and materials science at the Center for Materials Research, and the Chemistry Department at NSU. His research interest is polymeric optoelectronic materials for solar energy applications.

Dan Wang obtained his BS in polymer materials and engineering from Qingdao University of Science and Technology in China, and his MS in materials science from NSU in 2015. His recent research focuses on the development of organic optoelectronic materials, under the direction of Sam-Shajing Sun.