During the generation of a supercontinuum, the interplay of multiple nonlinear optical effects causes a spectrum to be drastically broadened. As such, supercontinuum generation circumvents the need for a proper gain medium, and has enabled the development of high-brightness spatially-coherent broadband sources that can operate up to the mid-IR region of the electromagnetic spectrum.1 A similar source that could operate at visible to near-IR wavelengths would be a useful component for several biological applications (because absorption by tissues in this spectral window is relatively low). The potential applications of such a source include optical coherence tomography2 and coherent anti-Stokes Raman spectroscopy.3

The advent of photonic crystal fibers (PCFs) fueled supercontinuum research activities after the concept was first demonstrated.4–6 These fibers provide relatively strong light–matter interaction and a good degree of control over the chromatic dispersion. As a result, PCFs have been a fruitful platform for academic research5 and for the initiation of commercial products (e.g., NKT Photonics' supercontinuum source). Lately, supercontinuum generation has been receiving renewed attention thanks to integrated photonics platforms. In these devices, nanophotonic waveguides are used to squeeze light into a very small area. This greatly reduces the threshold power that is required for supercontinuum generation. In addition, silicon and silicon nitride photonics platforms are compatible with the fabrication of CMOS devices.7, 8 It should therefore be possible to shrink the size of supercontinuum sources, and to cut their price and boost their yields.

In our work, we have developed a new silicon nitride photonics platform for supercontinuum generation that covers a biologically relevant spectral range.9 We work with silicon nitride—an emerging CMOS-compatible material—because of its large transparency window, its relatively high nonlinearity, and its high refractive index. Indeed, silicon nitride platforms have previously been successfully demonstrated for ultrabroadband supercontinuum10 and frequency comb11, 12 applications.

Phase matching is a key process that we use to transform our silicon nitride waveguide into a set of nonlinear channels for supercontinuum generation. Phase matching involves the conservation of the momentum that is associated with the nonlinear process of four-wave mixing. During supercontinuum generation, the phase matching condition is closely related to the group velocity dispersion (GVD) level. We can tune the GVD and therefore vary the dominant spectral broadening mechanism.

We engineer our waveguides with a small level of anomalous GVD so that they favor the broadest spectrum generation possible. Obtaining small anomalous dispersion levels, however, is non-trivial. This is because silicon nitride has a strong normal material dispersion, which is caused by the proximity of the material bandgap. We therefore need to compensate for the strong normal material dispersion by means of waveguide dispersion. We achieve anomalous dispersion in our silicon nitride waveguide—following a previously developed approach13, 14—by partially underetching the silicon oxide that is found underneath the waveguide core.9 The GVD that we obtain for the fundamental quasi-transverse electric mode of our engineered waveguide is shown in Figure 1 (the structure of the device is also shown). We etch the bottom cladding of our waveguide over 150nm to ensure good mechanical stability and the required dispersion for supercontinuum generation. 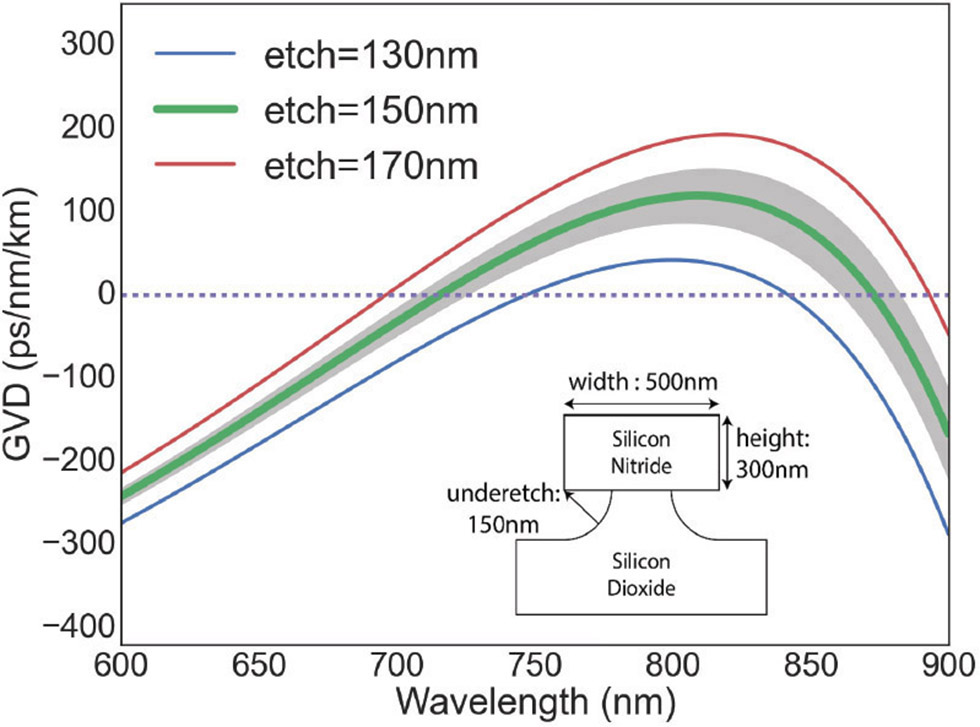 Our experimental setup for supercontinuum generation is shown in Figure 2. The seeding pulses originate from a titanium:sapphire laser, which emits at 795nm. We couple the laser to the waveguide with a microscope objective. The photograph in Figure 2 clearly indicates that our supercontinuum—generated in the second half of our straight waveguide—extends to visible wavelengths. We use a lensed fiber to collect the broad spectrum, which is then sent to an optical spectral analyzer for characterization. The results we obtain are shown in Figure 3 as a function of coupled input peak power. At the maximum available coupled power (874W) we find that the −30dB bandwidth spans 490nm (488–978nm), i.e., slightly more than an octave. 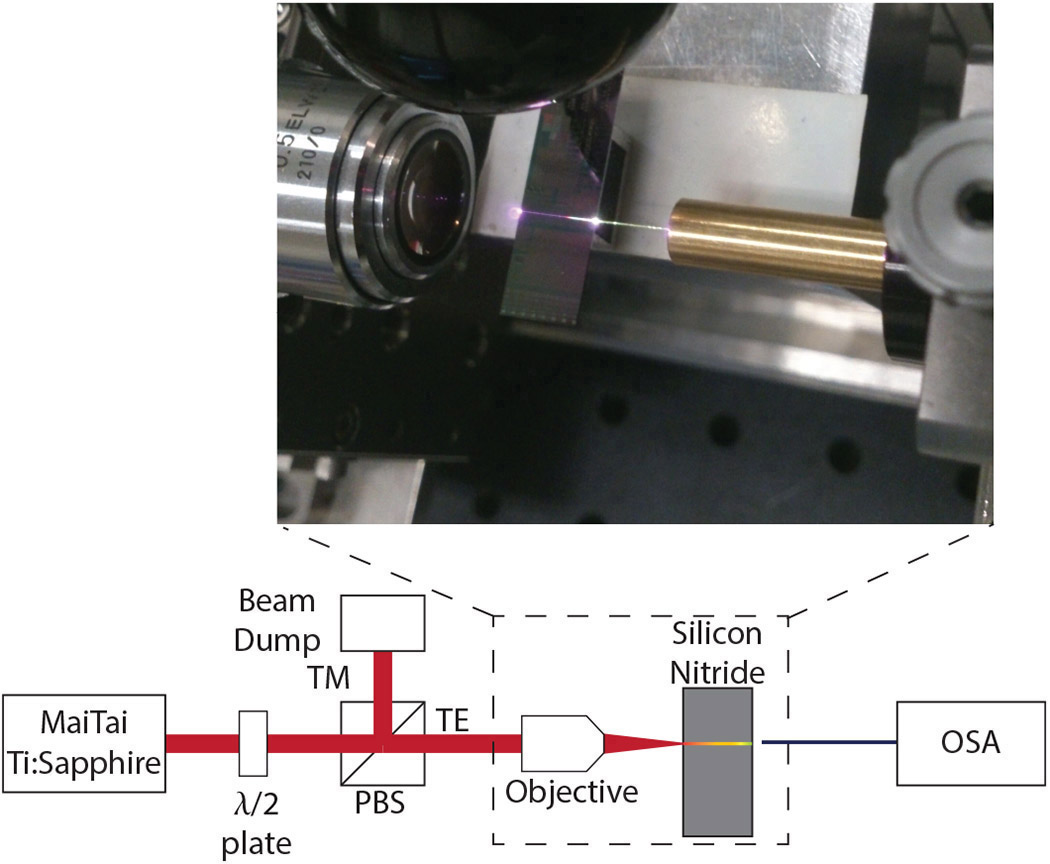 Figure 2. Schematic illustration of the experimental setup for supercontinuum generation. Light is emitted from a MaiTai titanium:sapphire (Ti:sapphire) laser. The light is then coupled into the silicon nitride waveguide through a microscope objective and coupled out through a lensed fiber. The photograph shows that visible light is generated as an end result. The supercontinuum is passed to an optical spectrum analyzer (OSA) for characterization. λ/2: Half-wave plate. PBS: Polarization beam splitter. TM: Transverse magnetic. TE: Transverse electric. 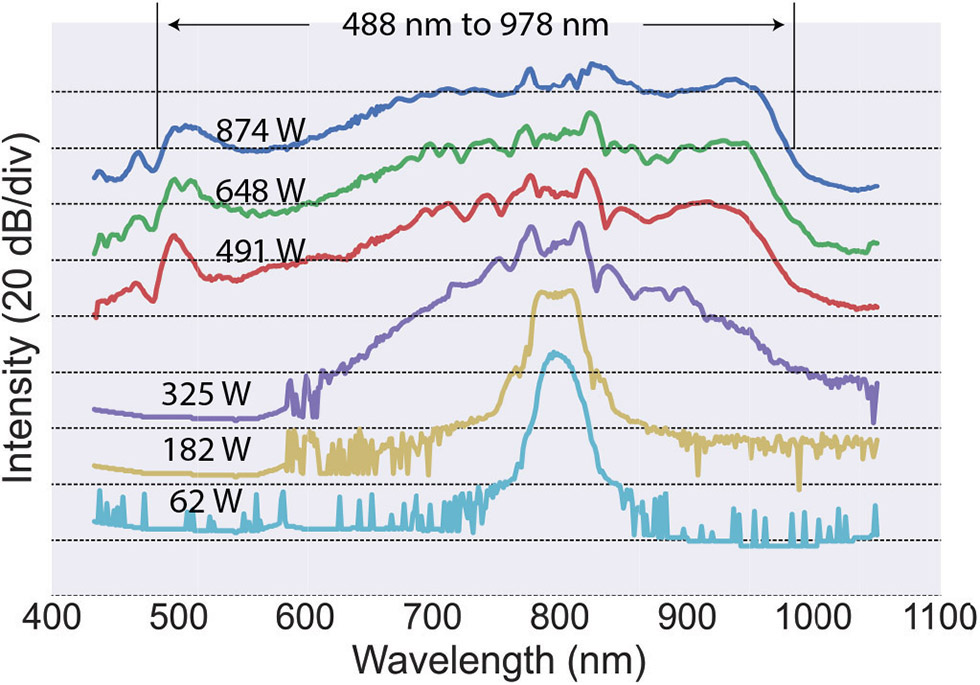 Figure 3. Spectral outputs of the silicon nitride waveguide for several input peak powers. The spectra are offset on the vertical axis for clarity.

We have extended the technique of underetching to silicon nitride photonics platforms, which can be used to produce an octave-spanning supercontinuum source. Our generated supercontinuum extends into visible wavelengths and therefore covers the main transparency window of water, which is of critical importance for biology. As such, our devices can be used as novel, compact visible broadband sources for Raman spectroscopy, confocal microscopy, optical coherence tomography, and frequency metrology. In the next stages of our work we will apply our dispersion engineering approach to ring resonators for frequency comb generation. This may help us reduce the pump power requirements and pave the way for fully integrated bio-detection devices.

The authors acknowledge the funding from the European Research Council, as part of the InSpectra project.

Roel Baets is a full professor and works mainly in the field of integrated photonic components. He has also made substantial contributions to research on semiconductor laser diodes, grating devices, and photonic integrated circuits (in both III-V semiconductors and in silicon).

Haolan Zhao received his MS from Ghent University in 2013. He is now undertaking his PhD research, which is focused on third-order nonlinear optical properties of biomaterials.

Bart Kuyken received his PhD from the Department of Information Technology at Ghent University. He is currently working as a postdoctoral fellow in the Photonics Research Group and at the Max Planck Institute of Quantum Optics. His current research interests include the integration of nonlinear optical functions in silicon photonics waveguides that exploit the high light–matter interactions in integrated waveguides.

Stéphane Clemmen received his PhD from the Université Libre de Bruxelles in 2010. Subsequently, he was a postdoctoral researcher at Cornell University, where he worked on frequency-coded quantum photonics. He joined Ghent University in 2014 and his research is now focused on integrated Raman spectroscopy and integrated second-order nonlinearities.