The behavior of light at, or within, the nanoscale vicinity of a metallic surface is one of the remaining problems in the field of light theory. Electron oscillations in metallic nanostructures are directly driven by light wave electric fields.1 Such oscillations offer unprecedented means for the control, focus, and manipulation of light,2–4 as well as electron charge5, 6 and spin,7,8 at nanometer scales. This is the basis for the relatively new field of nanoplasmonics. For innovative nanoplasmonic devices, the strengths of both photonics-based and electronics-based technologies are leveraged. This new technology frontier is growing rapidly and has several novel applications in optical and electronic devices, telecommunications, medical diagnostics, and energy. To fully benefit from the advantages that nanoplasmonics (i.e., nanoscale integration and ultra-high-frequency bandwidth operation) offers in the fields of electronics, optical signal processing, optical computing, and information processing, however, the nanoscale properties of the devices must be realized for on-chip functionality. For instance, merging nanoplasmonic technology with existing silicon (Si) photonics and Si-based CMOS electronic circuits is a key challenge that needs to be addressed so that ultra-high-bandwidth operation and communications can be achieved. Enabling these new technologies also requires the nonlinear optical properties of Si to be accessed and enhanced.

Over the past 50 years, Si has been the foundation of the information processing revolution. Furthermore, Si is a key component in CMOS devices. It has the highest third-order nonlinear coefficient of all CMOS materials and the highest refractive index (which allows for compact waveguide dimensions and high confinement that can enhance nonlinear interactions).10, 11 The well-established growth and processing techniques for Si, together with the availability of high-performance telecommunication band lasers, have made Si photonics a rapidly developing field of research.12, 13 Despite the advanced functionalities demonstrated in Si photonics devices, however, visible light emission remains the greatest challenge. This is because of the indirect Si bandgap and the strong absorption of any generated visible light.

In our team at the University of Alberta, we have demonstrated high-efficiency (2.3×10−5) generation of green light from a Si-on-insulator (SOI) waveguide, which we achieve via third-harmonic generation (THG).9 Our Si-based nanoplasmonic waveguide is simple to fabricate, compatible with modern CMOS electronics and photonics technologies, and it occupies an ultra-compact footprint (0.4μm2). A schematic depiction of our nanoplasmonic device, near-IR excitation scheme, and the observed visible light emission is illustrated in Figure 1(a). We couple 1550nm, 80fs laser pulses to a Si-loaded gold (Au) nanoplasmonic waveguide: see Figure 1(b). The nanoscale IR electric field confinement and strong light–matter coupling that arises from the surface plasmon mode in the Si nanoplasmonic waveguide—see Figure 1(c)—therefore enables efficient nonlinear optical mixing and strong interactions at micrometer length scales. 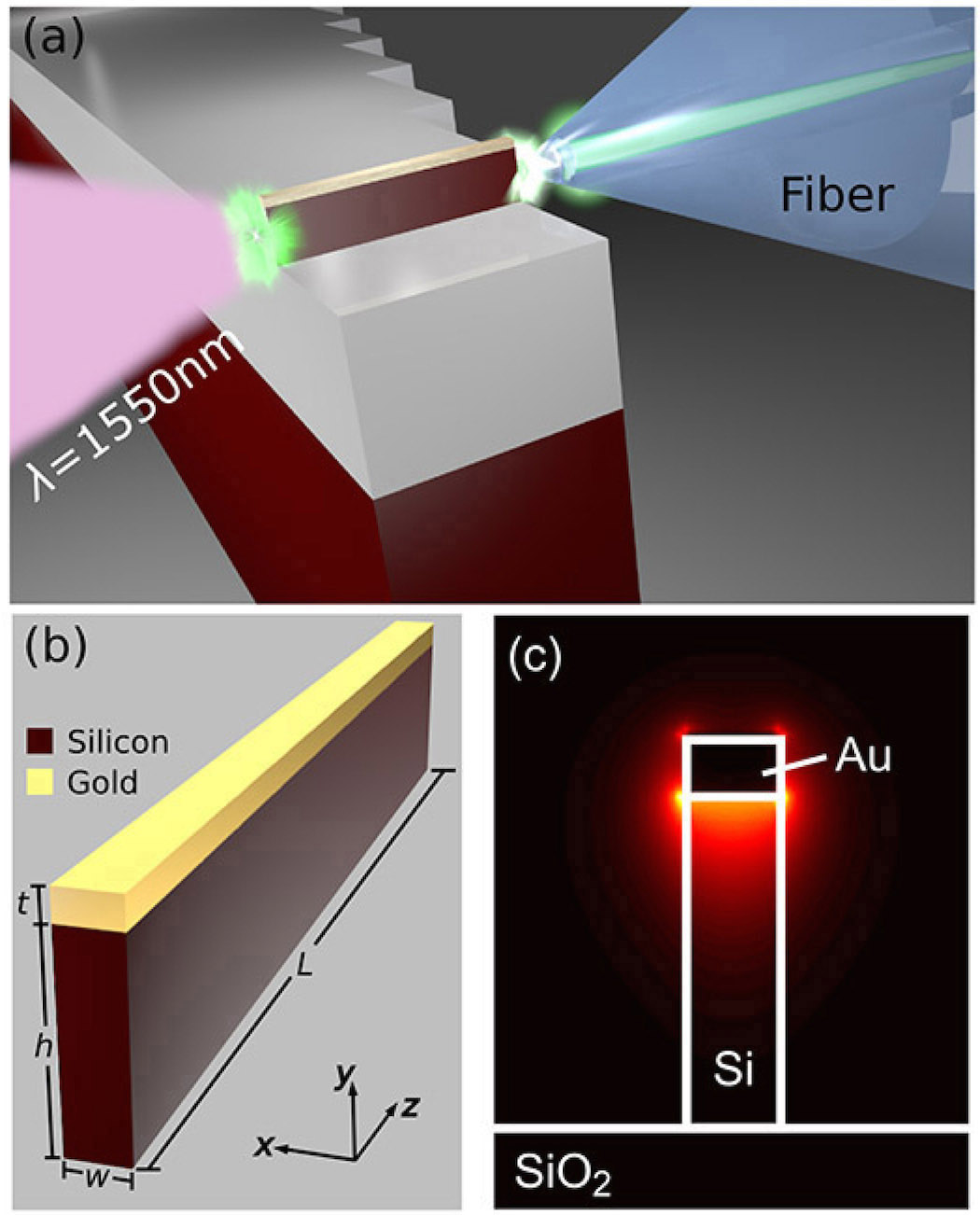 Figure 1. (a) Illustration of a nanoplasmonic third-harmonic generation (THG) device. Excitation (at 1550nm) occurs at the input face and guided visible green light emission (517nm) occurs at the output face. (b) Schematic diagram of the silicon-based nanoplasmonic waveguide (with dimensions of t=60nm, h=340nm, w=95nm, and L=2–10μm) fabricated on a silicon-on-insulator (SOI) wafer. (c) Waveguide transverse mode at 1550nm strongly confined within 135nm of the gold–silicon (Au–Si) interface. SiO2: Silicon dioxide.9

A scanning electron microscope image of one of our exemplary Si nanoplasmonic waveguides is shown in Figure 2(a), before deposition of a silicon dioxide protective cladding layer. We fabricated this device on a 75μm-tall ridge on a SOI wafer so that near-IR light coupling was possible. The varying lengths of the parallel Si nanoplasmonic waveguides on the narrow ridge are shown in Figure 2(b). A close-up of the cross-sectional geometry (width 95nm, height 340nm, and 60nm-thick Au layer) of the waveguide end's facet—see inset of Figure 2(b)—clearly indicates that the Si width is unable to support photonic transverse mode light propagation at 1550nm. Upon exciting our sub-wavelength Si nanoplasmonic waveguides with the 1550nm radiation, we observed bright third-harmonic conversion at a wavelength of 517nm. This propagates through and exists at the end facet of our Si nanoplasmonic guide (see Figure 3). The near-IR to green light conversion efficiency that we measure is at an unprecedented level, i.e., two orders of magnitude greater than previous measurements.15 The enhanced conversion efficiency that we achieve is caused by the tight mode confinement, which increases the local electric field to a magnitude of about 5V/nm in the Si core. We note that the short propagation length signifies the nature of the strong light–matter coupling, which is required for efficient nonlinear harmonic generation. Third-harmonic generation from several individual Si nanoplasmonic waveguides (as the 1550nm beam is scanned across) is presented in Figure 4. This demonstrates that we observed emission only from the waveguides and not from other areas of the sample. 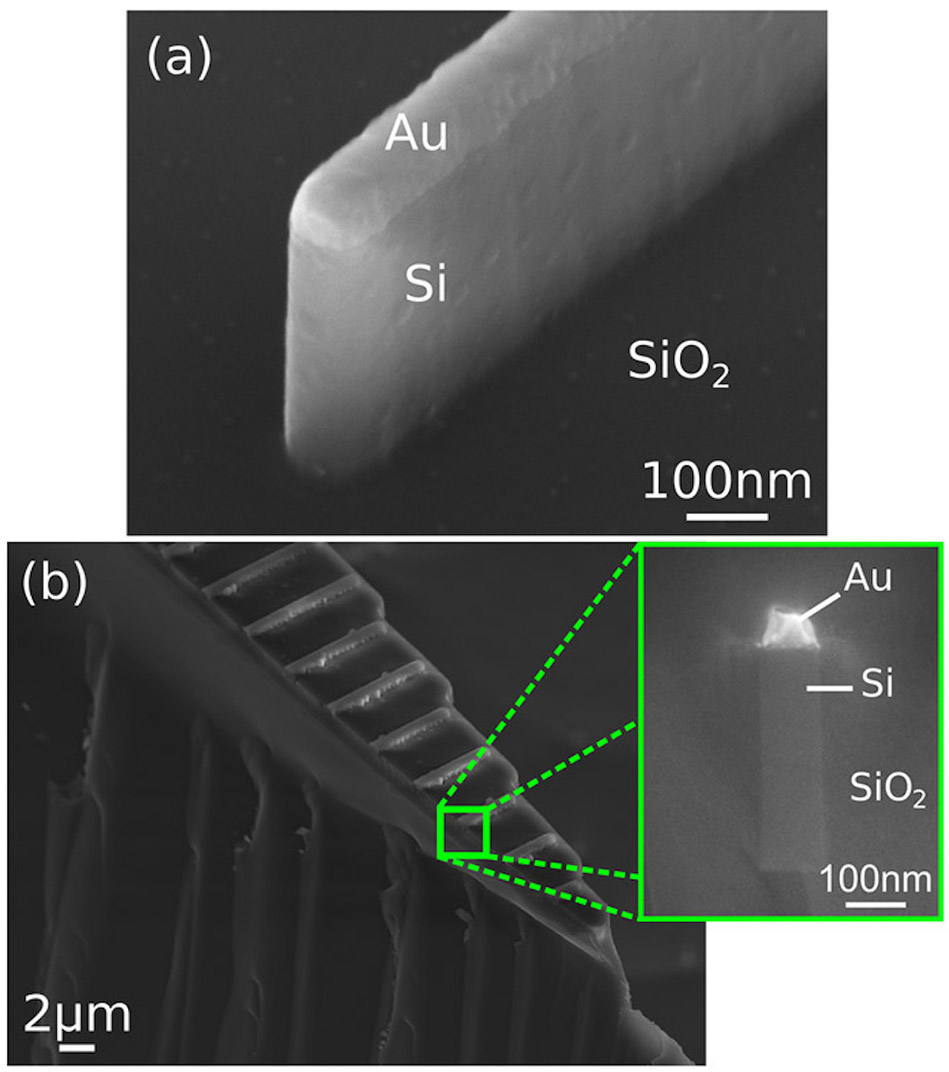 Figure 2. Scanning electron microscope images of (a) a single Si nanoplasmonic waveguide, which is used to demonstrate THG from 1550nm light and (b) an array of nanoplasmonic waveguides fabricated on a narrow (75μm) beam of a SOI wafer. A magnified cross-sectional image of the Au-Si-SiO2 waveguide facet is shown in the inset.9 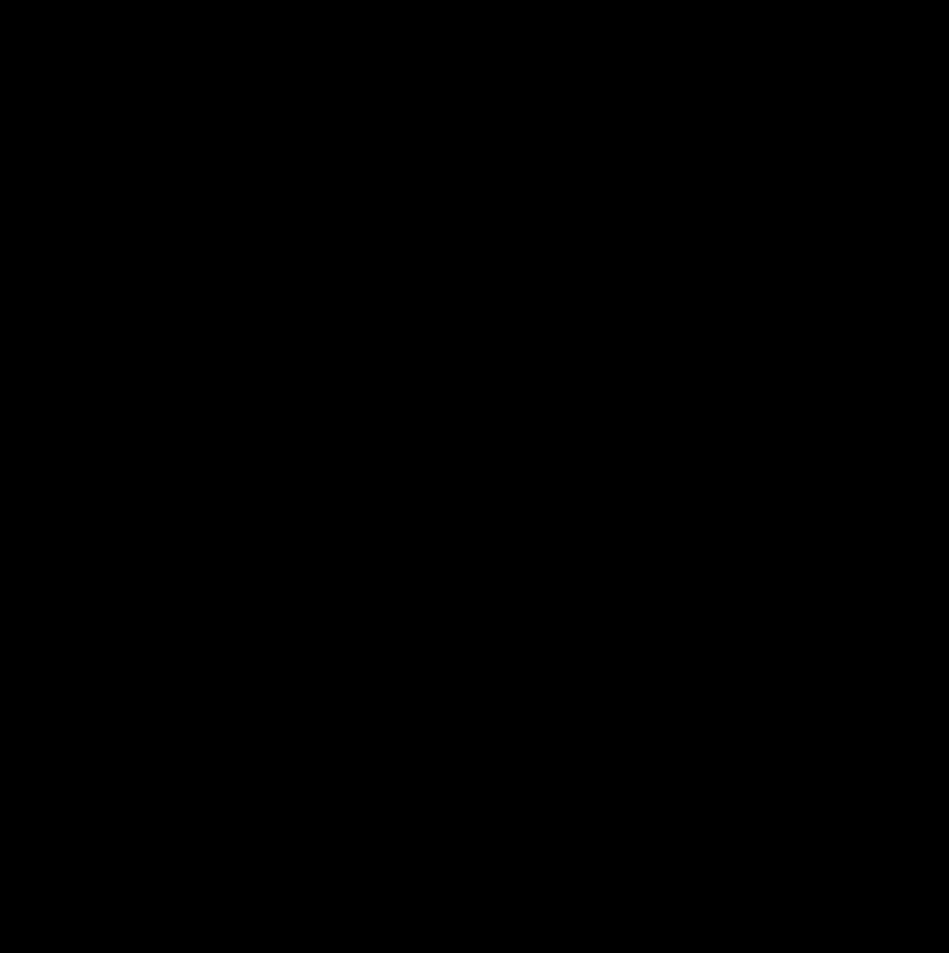 Figure 3. Optical microscope image of an array of the Si nanoplasmonic waveguides with various lengths, as shown in Figure 2(b). One of the Si nanoplasmonic waveguides is excited by a 1550nm, 80fs laser pulse, and the visible green light (517nm) emission is detected at the exit of the waveguide. The third-harmonic-generated green light is collected via a lensed optical fiber for analysis.9 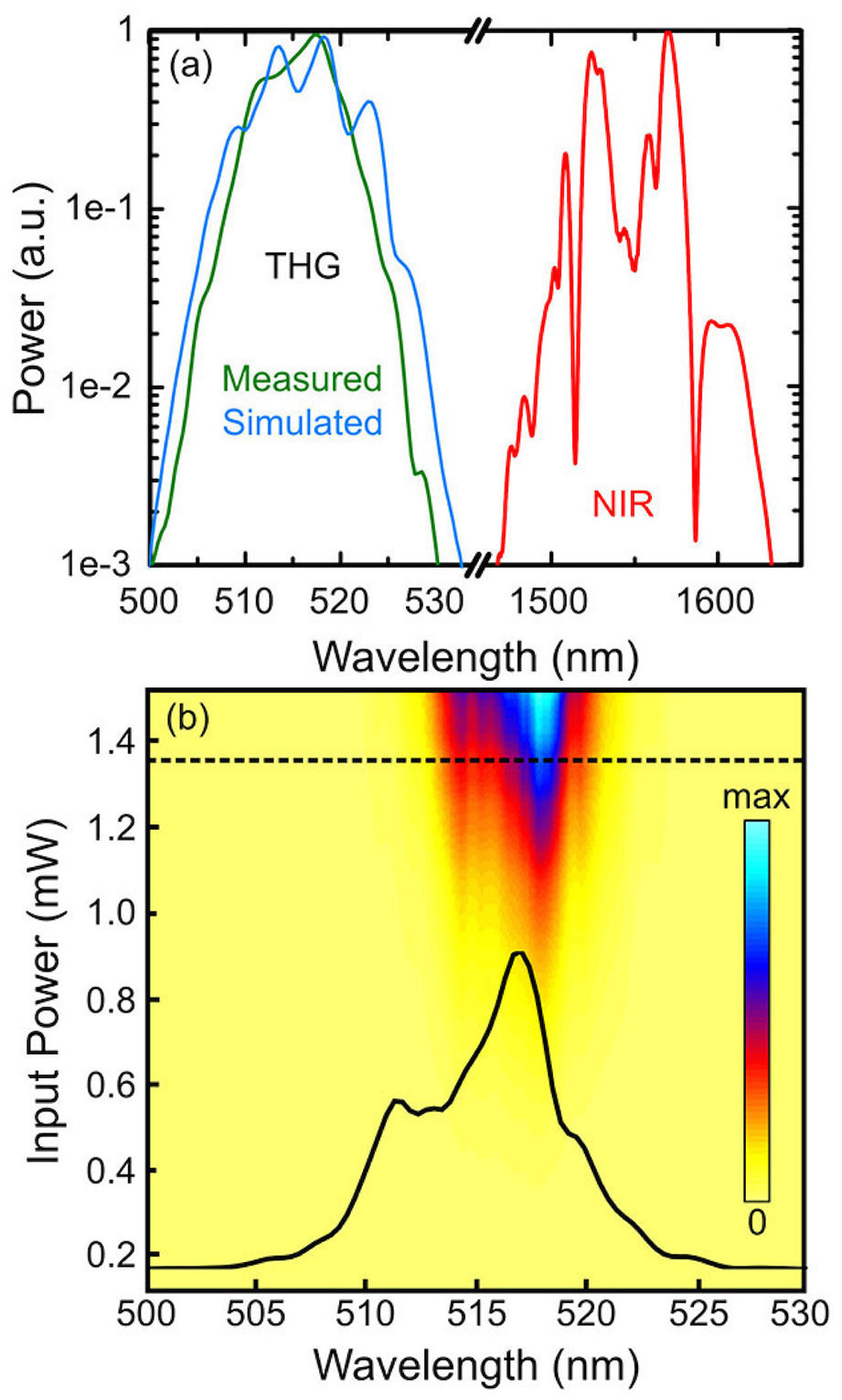 Figure 4. THG at 517nm (green light) from several individual Si nanoplasmonic waveguides, as a 1550nm laser beam is scanned across. (a) Spectra of the exciting near-IR pulse (NIR, red), measured third harmonic (green), and third harmonic calculated from the fundamental spectrum (blue). a.u.: Arbitrary units. (b) Surface plot showing the broad spectral content from the THG process as a function of the input of the near-IR laser power. The black THG spectrum is from an input of 1550nm (center wavelength), 80fs pulse duration, at a power of 1.36mW.9 The green light is bright enough to be observed at ambient light conditions. See also an online video of this figure.14

Our Si nanoplasmonic THG process is a non-resonant phenomenon, and it therefore does not require phase matching. In our Si nanoplasmonic waveguides THG takes place over a short distance, i.e., less than the absorption length of green light in Si (about 700nm). Since the nonlinear interaction scale length is much shorter than the coherence length of the THG process, the light conversion process enables a high third-harmonic conversion efficiency of broadband femtosecond pulses with minimal spectral amplitude modulation. This is a key finding in coherent optical information processing. The out-coupled laser spectrum is shown in Figure 4(a) together with the third-harmonic-generated (3ω) spectrum. The 3ω spectrum is very broad—see Figure 4(b)—and spans the 500–530nm wavelength.

Our nanoscale device can also be used to generate ultrafast visible light, which is synchronized to the pump excitation. As such, the devices can deliver accurate synchronization clock pulses for CMOS electronics as they are generated and detected in the same Si material. We envisage that this platform will provide the first high-precision skew-free clock—with time jitter of less than a single optical cycle—which can be delivered monolithically on the same CMOS platform. This would therefore represent a major breakthrough for integrated circuits, and also for optical communication, quantum computing, and quantum information technology.

We have developed a new ultra-compact Si-based nanoplasmonic waveguide that is simple to build, and which is compatible with current CMOS and photonics technologies. With this device we are able to achieve THG of green light at unprecedented efficiencies. The platform that we have demonstrated is thus the ultimate combination of compact dimensions, ease of integrability, and high conversion efficiency. These key features provide a significant advance in Si-based nonlinear optics and visible light generation, and they will be a catalyst for future research into nonlinear Si-based devices. In our future work we will focus on improving the conversion efficiency of our waveguides with the use of resonators that can further enhance the electric fields. We will also develop a scheme to resonantly couple the third harmonic onto a silicon nitride waveguide so that it can be guided and used on the chip. Finally, we will use hybrid plasmonic waveguides (which have lower losses) in an effort to spectrally broaden the fundamental laser pulses and to generate a supercontinuum that spans the spectral region between the third harmonic and the fundamental.

Abdulhakem Elezzabi is a professor in the Department of Electrical and Computer Engineering.