Chemotherapy is a major component of modern cancer treatment, yet its efficacy is limited by its serious toxic effects on normal tissue. Drug dosages are therefore often inadequate for complete tumor regression. There is thus a clear need for a physical targeting technique that leads to increased drug delivery at the tumor site. This would enable significantly lower overall therapeutic dosages to be used. Chemotherapeutics gain entry into cells through the plasma membrane. This barrier limits the agents that are in clinical use to mostly lipophilic or low molecular weight compounds, which passively diffuse into the cell cytoplasm. Unfortunately, many highly effective chemotherapeutic agents are large and water-soluble, and are actively transported into cells by endocytosis (ingestion by the cell's plasma membrane).

The poor ability of endocytosed drugs to escape from the resulting intracellular endosomes (compartments inside the cell) leads to their inactivation by lysosome (enzyme-containing organelles)-endosome fusion, as shown in Figure 1(a). One technique for the enhanced delivery of macromolecules into the cell cytosol via endosomal escape is based on photochemical internalization (PCI), in which the photochemical properties of photodynamic therapy (PDT) are used.1, 2 PCI is based on using photosensitizers that localize in the membranes of endocytic vesicles. When light is applied, the photosensitizer reacts with oxygen, causing membrane rupture and resulting in the release of encapsulated macromolecules into the cell cytosol. This allows the anti-cancer biological effect to be used to its maximum, as shown in Figure 1(b). Initial PCI protocols used the ‘light after’ approach—see Figure 1(b)—since it was thought that the photosensitizer and the compound to be released from the endocytic vesicles had to be located in the same compartments at the time of light exposure. Recent studies, however, have shown that light can be delivered many hours before delivery of the compound without reducing the efficacy of the combined treatment.3 A potential drawback of light-based therapies, however, is the limited penetration depth of light in biological tissues. 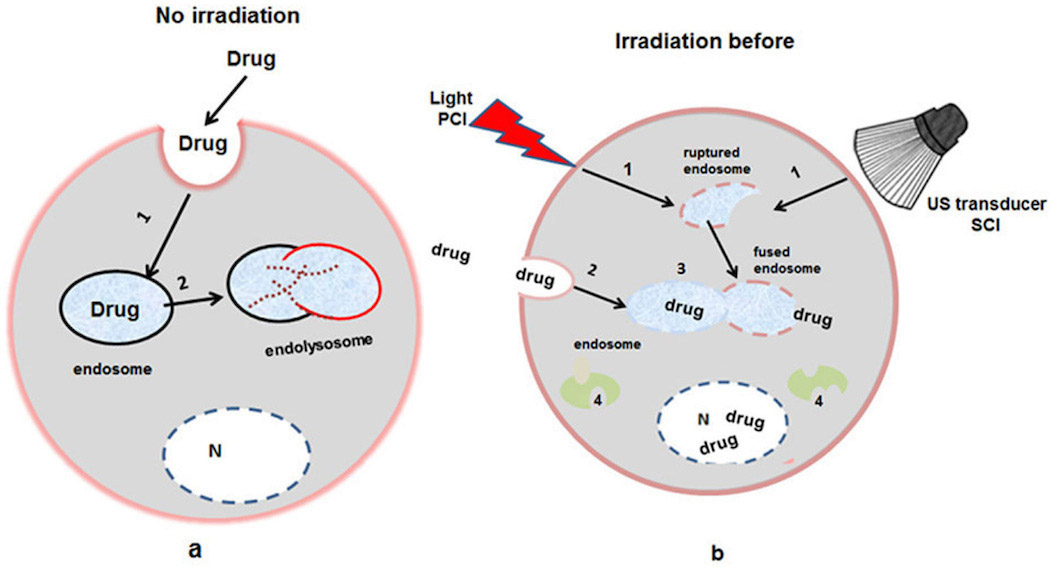 Figure 1. Mechanism of drug delivery during chemotherapy treatment. (a) 1: Drug enters the cell by endocytosis and is trapped inside intracellular endosomes. 2: Fusion occurs between endosomes and lysosomes, causing inactivation of the drug. (b) 1: Cells pre-incubated with sono/photosensitizer are irradiated with either light (red arrow) for photochemical internalization (PCI) or by focused ultrasound (US)—from a US transducer—for sonochemical internalization (SCI), which causes existing endosomes to rupture. 2: Drugs are transported to endosomes. 3: The drug-carrying endosome fuses with a damaged endosome, which allows the drug to escape. 4: Damaged lysosomes lead to cell autophagy. N: Nucleus.

We have therefore developed a new method to activate photo/sonosensitizers using, for example, focused ultrasound (FUS). For instance, sonodynamic therapy (SDT) can offer an alternative to light-activated PDT in several experimental protocols.4, 5 This approach should allow treatment to tumor sites buried deep within tissues, and even through an intact human skull. We hypothesized that FUS, together with sonosensitizers (i.e., with SDT), could potentiate the effects of drugs—sonochemical internalization (SCI)—in a manner similar to that demonstrated for light-based PCI.6 The basic concepts for both PCI and SCI are illustrated in Figure 2(b). 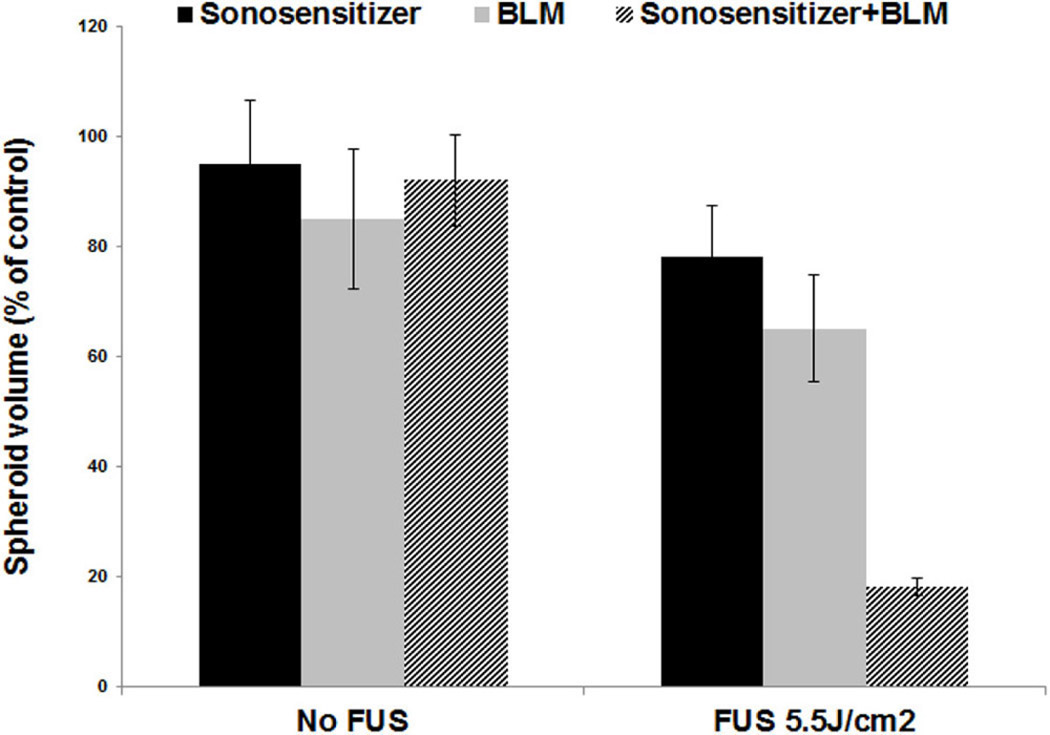 Figure 2. Effects of focused ultrasound (FUS) on drug efficacy to inhibit tumor growth in the absence or presence of sonosensitizers. BLM: Bleomycin (an anti-cancer agent).

As a proof of concept, we used an in vitro model to ascertain the ability of SCI to enhance drug effectiveness by employing rat glioma multicell tumor spheroids, together with the plasma membrane-localizing photo/sonosensitizer aluminum phthalocyanine disulfonate, and the anti-cancer agent bleomycin (BLM). We consider tumor spheroids, which are 3D aggregates of cells that mimic microtumors and metastases, to be a bridge between monolayer cultures and animal experiments. We use their growth over a period of weeks to evaluate response to treatment. In our experiments, we exposed spheroids to FUS irradiation, with and without sonosensitizers, and in the presence or absence of BLM. The results of a typical two-week growth period are shown in Figure 2.

The results of our experiments demonstrate that SCI has a high degree of synergism compared with either BLM alone, BLM and ultrasound (in the absence of SDT), or SDT for the FUS energies we investigated. We find it particularly interesting that SCI efficacy was significantly improved when we gave FUS prior to BLM administration (‘ultrasound before’) rather than after (‘ultrasound after’). This could be caused by the mechanism shown in Figure 1(b). Alternatively, it could be caused by intracellular lysosomes, which results in cell autophagy (designated as 4 in Figure 1).

We have also conducted live/dead assays in which we use two-photon fluorescence images. The results demonstrate enhanced cell death in SCI-treated spheroids, compared with BLM or SDT applied as single treatments (see Figure 3). This is inferred from the high proportion of red fluorescing cells we observed in the SCI-treated spheroids compared with treatment protocols for BLM only, BLM and FUS, or SDT (see Figure 3).

We have developed and tested a new approach for enhanced chemotherapy. Although the mechanisms of SCI and SDT are somewhat speculative, the results we present appear to show that SCI is a highly effective technique for the delivery of chemotherapeutic agents such as BLM. Our future studies will focus on delineating mechanisms for, and determining the utility of, this new technology for the delivery of other compounds. We will also investigate its effectiveness in animal treatment protocols.