The advancement of optical technologies demands an insightful and comprehensive understanding of light-matter interactions in materials that are not readily obtained in nature, or are synthesized by non-traditional means. Accordingly, the exploration of novel structures to control the flow of light at the nanoscale has become increasingly critical. Indeed, the past decade has witnessed the emergence and explosive development of optical metamaterials with exotic behaviors not previously observed.1 To accommodate these, we need to re-evaluate or modify the well-established rules of optics.

In a nonlinear optical regime, the phase-matching condition, governed by the momentum conservation of photons, is one of the most vital aspects to consider. To achieve a phase-matched condition for second-harmonic generation (SHG) (where photons of the same frequency interacting with a nonlinear material combine to generate new photons) in a conventional material with a positive refractive index, both the fundamental and harmonic frequencies of light must have an equal refractive index. In this case, the fundamental wave is gradually depleted and converted into its second-harmonic signal: see Figure 1(a). If this scenario occurred in a nonlinear medium with a negative refractive index, the condition would take a new form called backward phase-matching. This phenomenon, which was predicted nearly a decade ago,2–4 describes the two light waves at the fundamental and second-harmonic frequencies propagating along opposite directions: see Figure 1(b). However, this prediction still required an experimental verification at optical frequencies. The difficulty of validation lay in the ability to produce a negative-index material of sufficiently large size. In addition, it is even more challenging to tailor the refractive index at both the fundamental and harmonic frequencies simultaneously in bulk media. 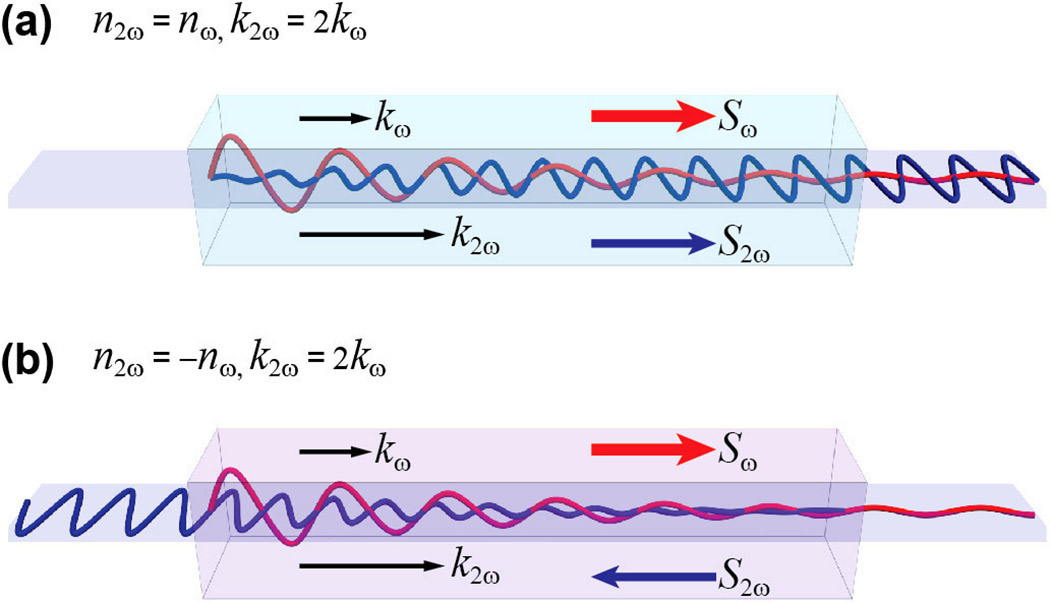 Figure 1. Phase-matching conditions for second-harmonic generation (SHG) in nonlinear optical media. (a) Conventional phase-matching for SHG, where the fundamental and harmonic waves possess the same index of refraction and co-propagate along the same direction. (b) Backward phase-matching in a negative-index material, where the frequency-doubled signal is directed toward the source of the fundamental wave. The red- and blue-colored lines in the schematics represent the fundamental and second-harmonic waves, respectively. n: Refractive index. ω: Frequency of light. k: Wave vector of light. S:  Direction of energy flow. (Figures modified from Lan et al.8)

For this reason, we used a plasmonic waveguide configuration to relax the restrictions on engineering the effective parameters in a bulk photonic metamaterial at multiple frequencies (see Figure 2). When nonlinear conversion occurs in a waveguide, the phase-matching condition for SHG requires that the propagation constants of the fundamental and harmonic waves are identical, which we can satisfy by exploiting the dispersion characteristics of different modes in the waveguide. A large dielectric constant in the gap of the plasmonic waveguide enables a pronounced separation between the surface plasmon and the bulk plasmon frequencies, while a narrow gap pushes the operating point away from the surface plasmon frequency and helps to balance the magnitudes of the refractive indices of the two modes. 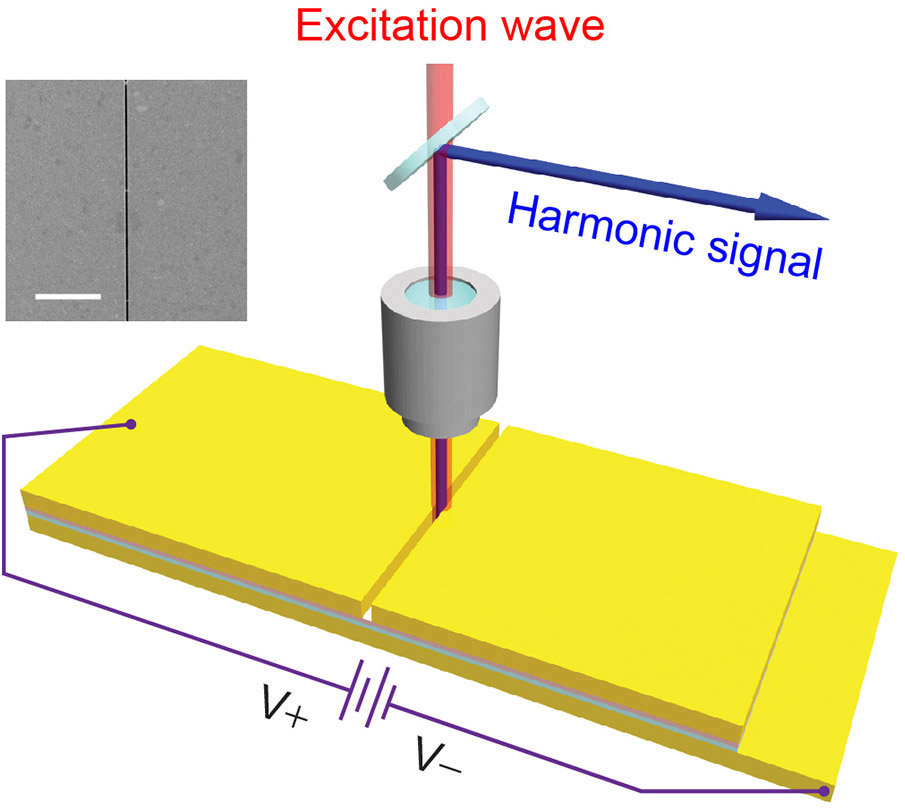 Figure 2. Schematic of experimental setup and structure of the sample. The device consists of two ultra-smooth dielectric layers of the same thickness, sandwiched between two metal films. The metallic layers serve a second function as electrodes. A nanoslit cut through the top metallic layer functions as the in-coupling entrance for the fundamental light, and the out-coupling port for the generated harmonic signal. Inset: A scanning electron microscope image of the fabricated structure, with a scale bar of 5μm. (Figures modified from Lan et al.8)

There are two immediate challenges for generating phase-matched second-harmonic waves in a plasmonic waveguide. First, the thin dielectric layer is inherently amorphous and thus possesses a vanishing second-order nonlinear susceptibility χ(2). Second, the two modes involved in the SHG process have opposite symmetries along the transverse direction. These prevent the nonlinear conversion between the two modes, because the nonlinear overlapping factor (defined as the integral of the product of the susceptibility χ(2), the SHG mode, and the square of the fundamental mode over the entire cross section) is precisely zero.

We overcame these obstacles by exploiting the electrically induced χ(2) effect in the dual-layered dielectric spacer in a planar plasmonic waveguide. Instead of the regular χ(2) response intrinsic to non-centrosymmetric interfaces and crystals (those lacking an inversion center), we produced the effective second-order nonlinear effect by the interplay between the ubiquitous third-order nonlinear susceptibility χ(3) and an applied control field.5–7 Moreover, we split the 30nm-thick dielectric spacer into two halves, each 15nm and made of silicon nitride (Si3N4) and hafnium(IV) oxide (HfO2). These two materials have similar linear, but distinct nonlinear behaviors and electrical conductivity. As a result, the electrically induced χ(2) effect is disabled in one half of the dielectric channel. This induced breaking of symmetry gives rise to a non-zero nonlinear overlap factor between the symmetric fundamental wave and the asymmetric SHG signal, and therefore enables a strong nonlinear conversion between the two modes.

In the absence of an externally applied voltage, a harmonic signal arises from multiple sources, including the exposed front metallic surface, the focused ion-beam-milled nanoslit (see Figure 2), and the internal metal-dielectric interfaces inside the waveguide. However, we ascribe only the latter to the nonlinear conversion between the plasmonic modes. We are able to produce and analyze harmonic signals exclusively stemming from the waveguide core by applying a voltage across the dielectric spacer.8 We expect this electrically induced frequency doubling, superimposed onto the regular, static SHG signal, to fulfill the requirements of backward phase-matching as simulated and shown in Figure 3(a). Figure 3(b) shows the dependence of the electrically induced SHG levels on the excitation wavelength. Assuming there is a constant fundamental intensity, we can identify a maximum SHG conversion efficiency at the fundamental wavelength of 780nm, indicating the existence of backward phase-matching in the plasmonic waveguide.

Figure 3. Backward phase-matched SHG. (a) Simulated intensity of the backward second-harmonic signal (red) and the degree of phase mismatch (blue) at different wavelengths (Δk/k0, ω). The conversion efficiency for SHG peaks at the excitation wavelength of 760nm where backward phase-matching occurs. (b) Intensity of the voltage-induced second-harmonic signal at a set of excitation wavelengths. The sharp peak in the conversion efficiency at 780nm designates the realization of backward phase-matching. a.u.: Arbitrary units. (Figures modified from Lan et al.8)

In summary, we have experimentally shown backward phase-matching for SHG in optical negative-refractive-index materials. This realization offers one key detail needed to fully understand the nonlinear light-matter interactions in artificial materials. Just as the negative refractive index opened the era of metamaterials in the linear regime, we hope to exploit its potential in the nonlinear regime to further explore the intriguing phenomena made possible by metamaterials. Our future work will focus on realizing that aim.

The authors acknowledge funds from the Georgia Institute of Technology, OPE LLC, the National Science Foundation, and the Air Force Office of Scientific Research MURI program.

Shoufeng Lan received his MS in optical science and engineering from the University of New Mexico in 2011. He is now undertaking doctoral research in the optical and electrical properties of natural and artificial nanomaterials.

Sean Rodrigues received his BS in chemical engineering from the University of Rochester in 2012. As a doctoral candidate in electrical and computer engineering, he looks to further identify exotic phenomena of metamaterial structures.

Wenshan Cai is an associate professor in the Electrical and Computer Engineering department. Previously, he was a postdoctoral fellow at Stanford. He received his PhD from Purdue in 2008, and his MS and BS from Tsinghua University in 2002 and 2000, respectively.