Laser desorption-ionization mass spectrometry (LDI-MS) using silicon to trap the analyte was introduced by Siuzdak's research group in 1999.1 This technique enables the detection of analytes at levels down to attomoles without using organic additives or matrices. In the application of matrix-assisted LDI-MS in proteomics and lipidomics, nanostructured inorganic substrates can outperform the more widely used organic matrices when employed to detect low-molecular-weight (LMW) analytes, e.g., ionized species (such as amino acids, sugars, peptides, and lipids) that have a mass-to-charge ratio (m/z) below 1000.

The main advantages of nanostructured LDI-MS platforms compared to organic matrices are the reduced spectral background, which is almost interference-free, and better reproducibility of results.2Silicon nanowires (SiNWs) represent a very promising building block for several applications. However, they are frequently prepared by a vapor-liquid-solid mechanism,3 in which a metal catalyst is usually incorporated in the wires, thus negatively affecting their electronic and optical properties.

Metal-assisted wet etching processes are an alternative method for the synthesis of SiNWs.4 In this process a metal catalyst is usually present in the etching solution as a salt or thin metallic layer. The metal catalyzes the oxidation of silicon by hydrogen peroxide and then silicon dioxide, which is selectively formed where metal and silicon are in contact, is etched by hydrofluoric acid.

Important advantages of metal-assisted etching compared to other methods are the ease of doping of the resulting SiNWs and better preservation of their structure and dopant distribution.5

With the support of two Italian projects, we are presently exploring the potential of metal NP/SiNW systems as a novel platform for LDI-MS applications. We obtained typical SiNWs from p-type (100)-oriented silicon wafers, which we etched with hydrofluoric acid to obtain oxide-free silicon surfaces. We then immersed clean substrates in etching solutions comprising, for instance, 40% silver nitrate, 40% water, and 20% hydrofluoric acid to obtain SiNWs with a length of 1.8 or 3.4μm. Next, we used pulsed laser deposition to obtain the complete, dense, and uniform decoration of SiNWs with silver or gold NPs. To fully decorate the surface of the SiNWs from the top to the base, we carried out two deposition cycles: one with 45,000 laser pulses and then another with 60,000 laser pulses. As a result, SiNWs were covered by metal NPs along their entire length. Figure 1 shows cross-section scanning electron microscopy images of 1.8μm SiNWs (left) without and (right) with metal NPs. 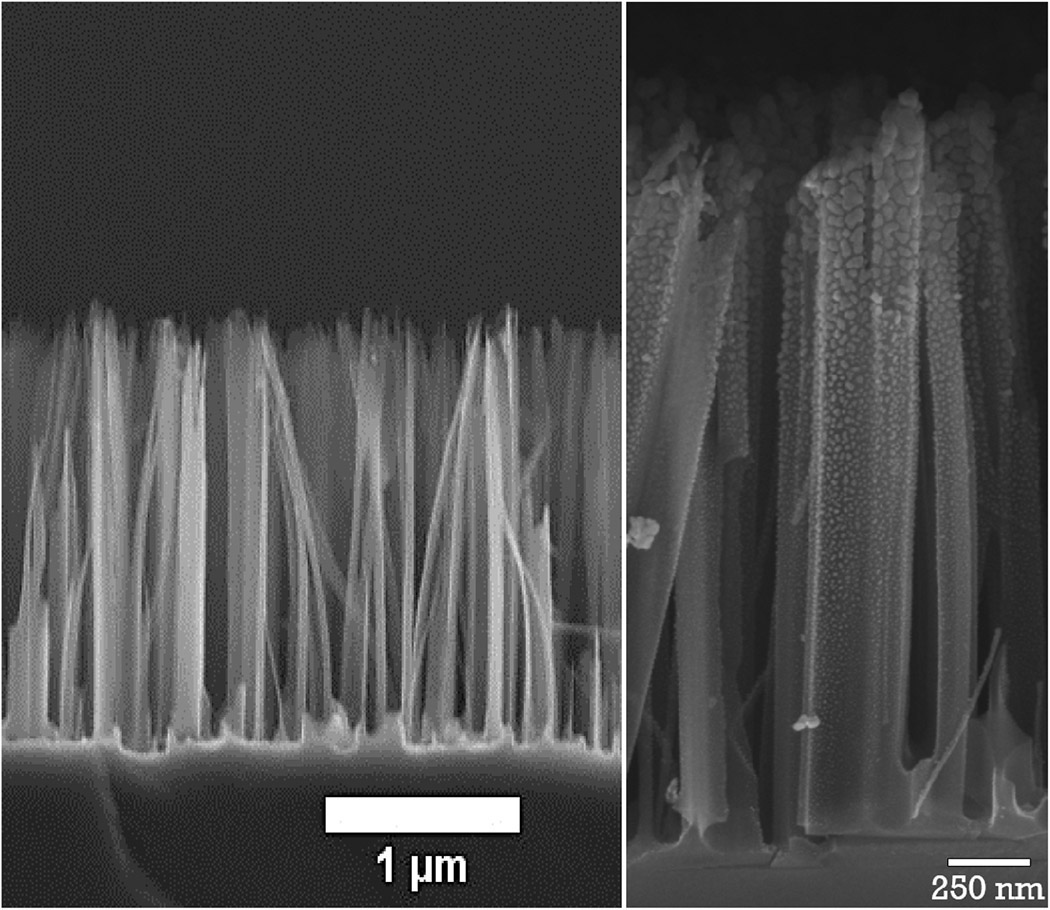 The proposed SiNW materials can be used for the direct LDI-MS detection of LMW molecules by depositing a solution of the analyte onto a SiNW platform adhered to an LDI-MS target. Morphological and surface spectroscopic data from mass spectrometry is well correlated as a function of the length, presence of additional metal, and surface composition of the SiNWs. Figure 2 provides an example of the interference-free spectra that we obtained using this approach. We easily detected 500pmol of squalene—a typical molecular marker of high-quality extra-virgin olive oil—as an adduct with silver ions emitted from the NPs of the silver/SiNW platform. 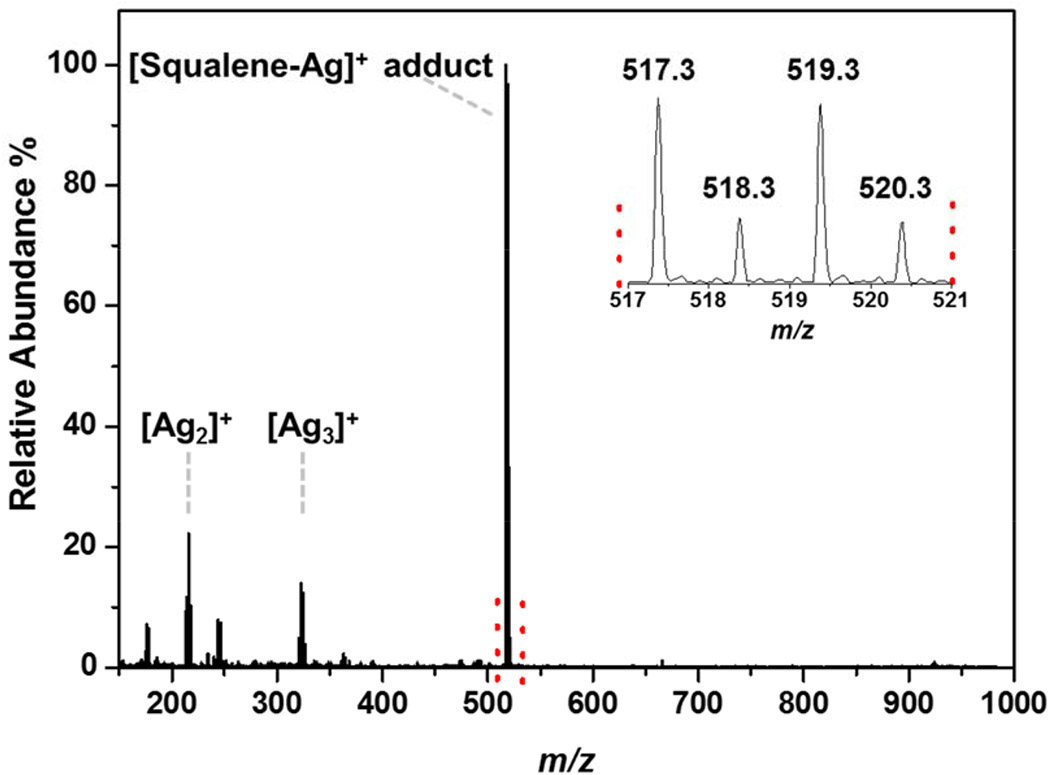 Decoration with metal NPs of SiNWs obtained by metal-assisted wet etching provides an interesting and novel approach to the production of high-performance nanostructured platforms for the direct mass spectrometric detection of LMW molecules. Bioanalysis, proteomics, lipidomics, and food chemistry are just a few examples of fields where we expect these nanomaterials will be effectively used.

Nicola Cioffi is associate professor at the University of Bari. He is the author of about 150 papers and international patents and has presented more than 240 conference communications and invited lectures. His research interests are in the fields of analytical chemistry, surface spectroscopy, and nanomaterials for the life sciences, including nano-antimicrobials, surface-assisted LDI-MS, gas sensors, biosensors, and catalysis.

Rosaria Picca is a postdoctoral fellow in analytical chemistry at the University of Bari. Her research interests are the development and analytical characterization of nanomaterials (metals and oxides) for applications in antimicrobial agents, sensors, and matrix-free LDI-MS methods.

Cosima Calvano is an assistant professor at the University of Bari. Her research interests focus on mass spectrometry in proteomics and lipidomics (finding applications in food, clinical medicine, and microbiology). She has developed new matrices for matrix-assisted LDI (ionic liquids, binary mixtures, and modified bases) for the analysis of hardly ionizable compounds.

Maria Sportelli is a PhD student in the chemistry of innovative materials at the Department of Chemistry, University of Bari. Her research focuses on the synthesis and spectroscopic/morphological characterization of metal and metal oxide nanomaterials for advanced analytical applications.

Barbara Fazio received an MSci in physics at the University of Messina in 1997. She worked at STMicroelectronics Central R&D in Catania as section head of the Process Integration Group. She is a researcher at the IPCF, CNR. Her scientific interest is in light scattering and sensors.

Sebastiano Trusso received an MSci in physics at the University of Messina. He is a researcher at the IPCF, CNR in Messina. His main research activity is focused on the growth of noble metal nanoparticles by pulsed laser ablation for surface-enhanced Raman scattering applications.

Alessia Irrera received an MSci in engineering of materials in 2000 and a PhD in materials science in 2004 from the University of Catania. She is a member of the IPCF, CNR in Messina. Her main research interest is in the synthesis and characterization of silicon nanostructures.

Paolo Ossi is associate professor in the experimental structure of matter at the Department of Energy, Polytechnic University of Milan. His research activity includes the interaction between energetic beams (photons, particles) and solid surfaces, nanoparticle synthesis in ablation plasmas, and artificially roughened plasmonic surfaces.

Fortunato Neri is full professor of experimental physics at the Department of Physics and Earth Sciences, University of Messina. His expertise is mainly related to experimental studies and the development of technological applications in solid-state physics and materials science.

Cristiano D'Andrea received an MSci and a PhD in physics at the University of Messina. He is a postdoc at IMM MATIS, CNR in Catania. His activity is focused on the synthesis and characterization of nanostructures.