Optimizing the quality and manufacture of nanocircuits

Nanoelectronic circuits can be written directly onto oxide semiconductors by tuning the local conductivity with a high-pressure atomic-force-microscope tip.
18 August 2015
Liuwan Zhang and Yuhang Wang

In the development of microelectronics, an essential step is the nanoscale manipulation of local doping concentrations in semiconductors. Among the techniques implemented to achieve this, the most widely used is the implantation of dopant ions into a semiconductor substrate via a photoresist mask. However, as devices get smaller, the photolithography technology that is used to fabricate these masks is reaching its physical limit in terms of spatial resolution.

Current nanofabrication techniques for the development of microelectronics include extreme UV lithography, nanoimprinting, electron beam lithography, focused ion beam milling, and nanoscratching.1 Among these methods, the latter—atomic-force-microscope (AFM) tip-generated nanoscratching—is a powerful tool with ultra-high spatial resolution. Typically, two steps are required to build a semiconductor circuit. First, a thin semiconductor film layer or a photoresist is predeposited on the substrates. The film is then patterned by scratching the materials off of the substrate using mechanical interactions at the AFM tip. A large mechanical force is required to remove these materials and, as a result, abrasive wear is caused to the AFM tip. Because of the easy degradation suffered by the tip, and the requirement for thin-film predeposition, this method is inefficient.1

We have therefore developed and demonstrated a new one-step method for the direct writing of nanocircuits. With our approach, we are able to bypass the inefficiencies encountered with other techniques. We can thus optimize the quality of nanocircuits and simplify their fabrication process.

In our one-step direct writing technique, we write conductive patterns onto a strontium titanate (STO) surface. STO is a wide-gap oxide semiconductor that is widely used in optical and electronic devices. It has been shown that the conductive surface of insulating bulk STO is a promising candidate for oxide electronics because of a number of its interesting properties (e.g., superconductivity, ferromagnetism, and metal–insulator transition behavior).2, 3 As an n-type dopant, an oxygen vacancy can be generated in STO by heating, electrical reduction, or mechanical interaction. This so-called self-doping feature makes it possible to control the conductivity of the oxide without the introduction of other elements.4 By implementing the high spatial resolution and high pressure of the AFM tip, we can manipulate the local doping concentration and fabricate nanodevices by directly scratching the STO surface at the nanoscale.

The structure of a prototype field-effect transistor (FET) that we have fabricated is shown in Figure 1(a).5 We deposited two gold (source and drain) electrodes on the STO surface 5μm apart. We also deposited a silver film on the back side to work as a gate electrode. Before the conductive channel is written the material between the source and drain acts as an insulator. We then introduced a 6μm × 6μm square area—see Figure 1(b)—that connects the source and drain electrodes. This region was scratched, line by line, using a boron-doped diamond AFM tip under high-vacuum conditions. During this writing process, the pressure under the tip was kept at ∼1GPa to generate oxygen vacancies without introducing surface damage. The conductivity distribution image for the device—see Figure 1(c)—shows the conductive channel between the source and drain electrodes.

We have also investigated the mechanism of the introduced surface conductivity. The temperature dependence of the conductivity falls in line with the thermal activation model. This is in accordance—see Figure 2(a)—with the nature of n-type doped materials. When exposed to oxygen, the conductive layer rapidly becomes insulating. This suggests that the conductivity arises due to the oxygen vacancy, as illustrated in Figure 2(b). Furthermore, we can tune the conductivity by altering the back-gate voltage, as shown in Figure 2(c) and (d). As such, our technology may have possible applications in future integrated circuit devices. 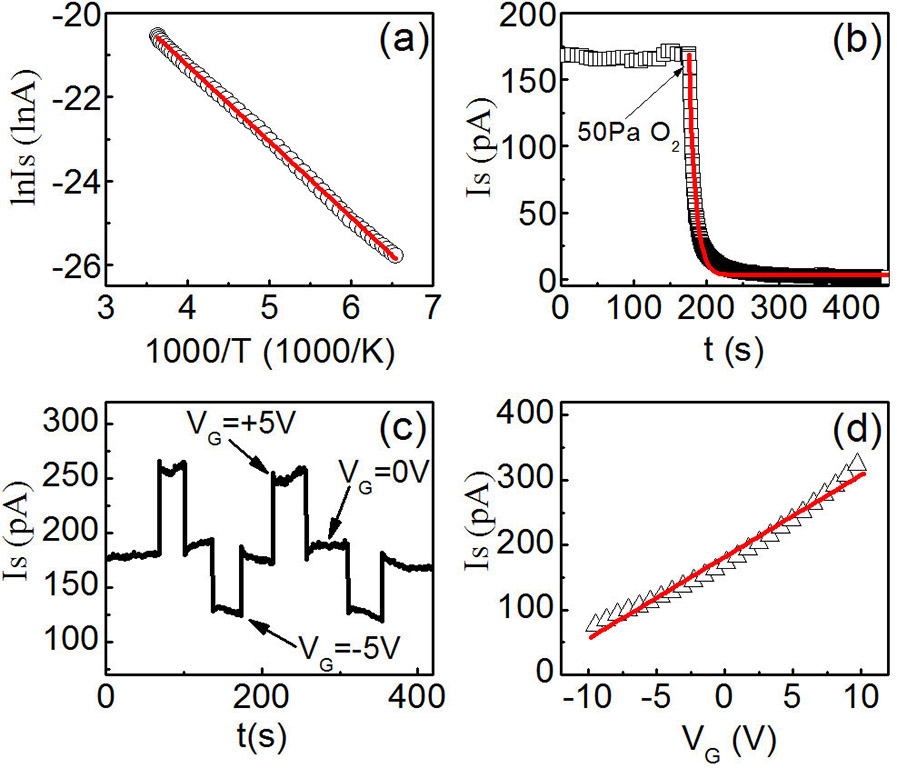 We have developed a technique that enables one-step direct writing of conductive patterns on an insulating substrate at the nanoscale. We achieve this by exploiting the mechanical interactions at the tip of an AFM. The conductive pattern is n-type, oxygen sensitive, and can be controlled via the back-gate voltage. It is therefore a promising approach for oxide nanocircuits, oxygen sensors, and quantum dot applications. In our future work, we will investigate the possible coupling of the conductive layer with the photon, magnetic-field, or electric polarization of the substrate.

Liuwan Zhang is a professor of physics at Tsinghua University and the State Key Laboratory of Low-Dimensional Quantum Physics. His research interests include the fabrication and characterization of low-dimensional strongly-correlated electronic materials.

Yuhang Wang completed his PhD at Tsinghua University and currently works as an assistant researcher.