One of the most pervasive problems afflicting people today is inadequate access to clean water and sanitation. By 2030—as estimated by the United Nations—47% of the world's population will live in areas with high ‘water stress’ levels. Removing pathogens, chemicals, and other contaminants to produce satisfactory water supplies (i.e., with high throughput and at a low cost) is thus a growing challenge around the world. It is thought, however, that nanotechnology can be used to improve water purification techniques. It should also be possible to reduce the cost of prohibitively expensive water cleaning methods, which are currently unaffordable for many developing countries.1, 2

Semiconductor photocatalytic processes have shown great potential as a water treatment technology. This methodology can be used to remove persistent organic compounds and micro-organisms that are found in water, and it has been demonstrated widely.2–6 Zinc oxide (ZnO) is a promising material for this technology as it has high photocatalytic activity, a low cost, and is environmentally friendly.7 There are, however, some drawbacks to the use of photocatalytic semiconductors that limit their application for large-scale photocatalytic processes. First, they have a high recombination rate of photogenerated electron-hole pairs. Second, the catalyst particles exhibit poor recovery after water treatment.

In our work we have investigated ways to address both issues with photocatalytic semiconductors. As such, we used a Picosun R-200 advanced atomic layer deposition (ALD) system to deposit polycrystalline ZnO on alpha-phase ferric oxide (α-Fe2O3) nanoparticles (which were purchased from Sigma-Aldrich). With this core-shell morphology we are able to reduce the recombination rate of electron-hole pairs. Indeed, with our approach, there is a transfer of electrons from the conduction band of the ZnO to that of the Fe2O3 (because of the different Fermi energy levels of the two semiconductors).8 The magnetic properties of α-Fe2O3 mean that the nanoparticles can be removed easily from water after the treatment has taken place (i.e., with the use of an external magnetic field). Examples of our synthesized core-shell nanostructures are shown in Figure 1. These transmission electron microscopy images illustrate an ensemble of α-Fe2O3 nanoparticles—see Figure 1(a)—that have been coated with an approximately 1.5nm-thick layer of ZnO. The ZnO layer is clearly visible in the high magnification image shown in Figure 1(b). A high magnification image of an uncoated Fe2O3 nanoparticle is also shown, in Figure 1(c), for reference. 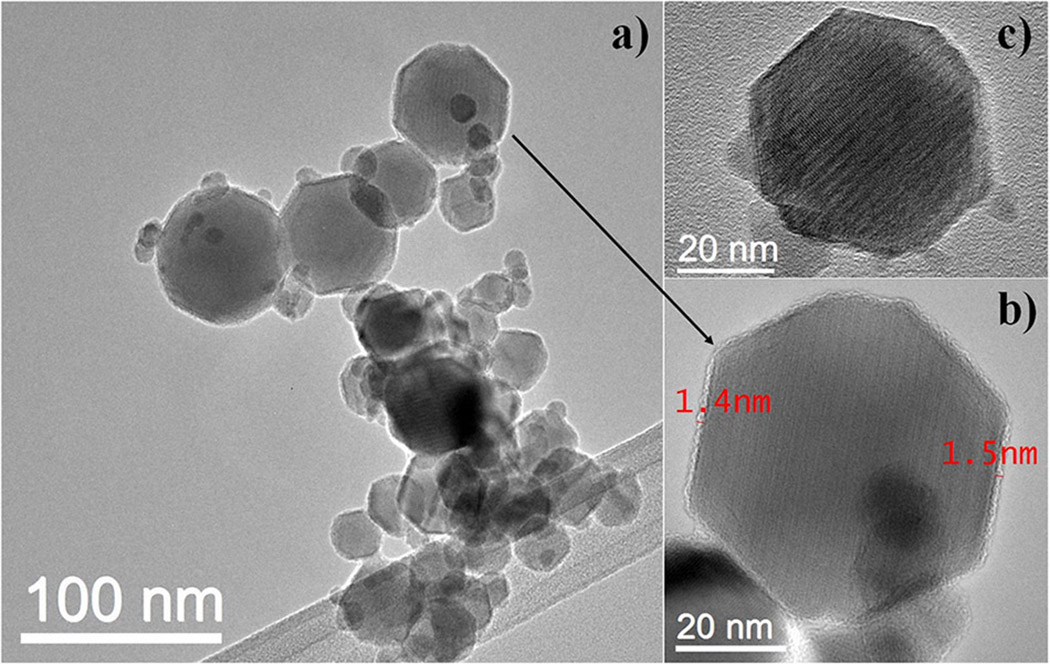 We evaluated the photocatalytic activity of our core-shell nanostructures by examining the degradation of methylene blue (MB)—a representative dye pollutant—under UV radiation. Before we made our measurements, we irradiated the samples with a UV lamp for 60 minutes to remove hydrocarbons from the sample surface. We then immersed 1mg of the nanoparticles in a 2ml solution of MB and deionized water (we used 1.5×10−5M as the starting MB concentration). Next, we irradiated the mixture with an irradiance of 1.1mW/cm2 from a UV lamp (in the 350–400nm wavelength range). We measured the irradiated solution with a spectrophotometer (in the 500–800nm wavelength range) at regular time intervals.

According to the Lambert-Beer law, the 664nm absorbance peak is a direct measurement of the MB concentration. We observe a decrease in the strength of this peak with increased UV irradiation time. This decrease is therefore a direct way to measure the photocatalytic decomposition of MB molecules. For reference, we also checked the decomposition of the MB dye in the absence of any photocatalyst material. We have thus compared the photocatalytic activity of the ZnO-coated Fe2O3 core-shell nanostructures with that of uncoated Fe2O3 nanoparticles and with that of a flat ZnO film. This ZnO film—which we deposited by ALD on a silicon substrate—had a thickness of about 2nm (i.e., about equal to the ZnO coating on the Fe2O3 nanoparticles) and an area of 1×1cm. We also conducted a set of control experiments in the dark for 60 minutes, i.e., so that we can separate the effects of the photocatalytic activity from the absorption of the MB at the sample surfaces and on the beaker walls. Our ZnO-coated Fe2O3 core-shell nanostructures showed a slight (about 10%) absorption of the MB in dark conditions. None of our other samples, however, showed any absorption, within experimental error (about 1%).

The photocatalytic activities, under UV irradition, of the materials we investigated are shown in Figure 2. We clearly observe a decrease in the MB concentration when the photocatalytic materials are added to the solution. After UV irradiation for 6 hours, the Fe2O3 nanoparticles caused about 8% of the MB to decompose. The ZnO flat film, however, caused about 10% decomposition of the MB. The largest amount—about 13%—of MB decomposition we observed was caused by the ZnO-coated Fe2O3 core-shell nanostructures. We believe that the efficiency of the ZnO-Fe2O3 core-shell nanostructures, with respect to the flat film, is the result of the increase in exposed surface area and because the α-Fe2O3 nanoparticles act as electron scavengers. 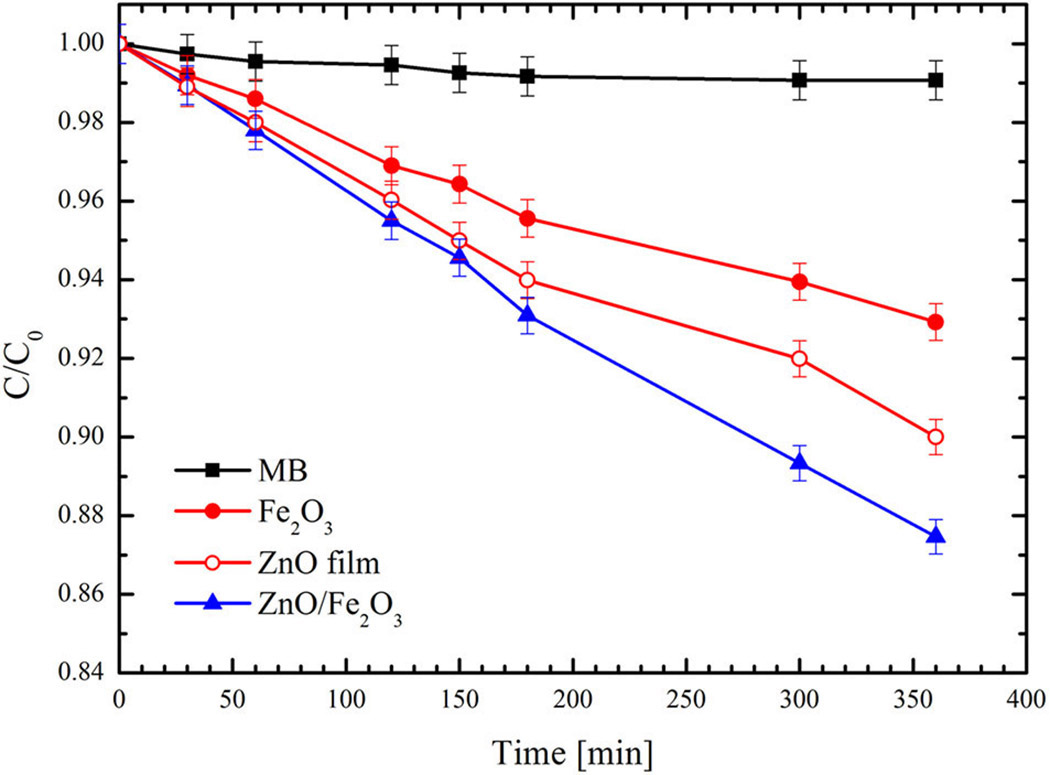 We have conducted a series of UV irradiation tests on novel ZnO-coated Fe2O3 core-shell nanostructures. Our results show that these substances are promising candidates for photocatalytic applications (e.g., for water treatment and purification). We are now planning to study the degradation of MB as a function of the thickness of the ZnO coating. The results of these experiments will be used to optimize the photocatalytic activity of our synthesized nanostructures. We are also planning to investigate the antibacterial activity of our materials against Escherichia coli, which is a common indicator of fecal contamination in water.

This research has been supported by the European Union's Seventh Framework Programme WATER project (grant agreement 316082).

Giuliana Impellizzeri's current research activities are focused on photocatalytic nanostructures for water treatments. She has more than 100 publications, one book chapter, and has edited two journal special issues. She is also an editor for Materials Science in Semiconductor Processing.

Alessandro Di Mauro has a PhD in chemistry. His research is focused on the synthesis of thin films and nanostructures by metal organic chemical vapor deposition and atomic layer deposition, as well as their characterization with x-ray photoelectron spectroscopy, atomic force microscopy, energy-dispersive x-ray spectroscopy, x-ray diffraction, and ellipsometers. He is currently a postdoctoral fellow working on the European Union WATER project.

Guillaume Amiard is a postdoctoral researcher. He is a specialist in molecular beam epitaxy of silicon-based semiconductors, electron microscopy (scanning and transmission), and focused ion beams. He is currently working on the characterization of nanostructures for water purification purposes.

Simona Boninelli has been a researcher at CNR-IMM since 2009. Previously, she worked at the Centre d'Élaboration de Matériaux et d'Études Structurales of the CNRS in Toulouse, France, and at the Italian Institute of Technology. Her research is focused on the development of advanced transmission electron microscopy for silicon and germanium nanostructures. She is the author of more than 70 publications and three book chapters.

Vittorio Privitera is a senior researcher at the CNR. He has published more than 200 scientific articles, holds two patents, has edited one book, won four national and international awards, and has coordinated several European Union projects. His research activities are currently focused on nanomaterials for use in water treatment.