Weapon threats to airborne platforms (i.e., manned and unmanned aircraft and helicopters) include missiles and direct fire from cannons, rocket-propelled grenades, and small arms. In addition, future threats may involve directed energy weapons (e.g., laser weapons). Although radar is used in many of these threats to detect and track the aircraft, an increasing number of systems use electro-optical sensing for this purpose. These mostly passive systems, however, are much harder to detect and identify than the radar equivalents (for which warning and positioning capabilities are already well established). New threat detection systems are therefore required to detect the next-generation of antiaircraft missiles.

Directional IR countermeasures (DIRCM) systems on aircraft are designed to track, and direct energy toward, a threat. In particular, preemptive DIRCM systems should be able to detect, identify, and counter a threat before any missile (or other weapon) has even been fired. In the past, preemptive DIRCM system technologies have been studied as part of the Defense Advanced Research Projects Agency's (DARPA's) Multifunctional Electro-Optics for Defense of US Aircraft (MEDUSA) program. In preemptive DIRCM systems, it is important to detect and analyze several different signatures, including ones that are not treated in conventional DIRCM systems. Such signals may include laser emission from the target, retro-reflections from optical sights and seekers, or the optical signatures of the weapon and operator (including the aiming and tracking activity).

We have been investigating the prospect of developing a reliable preemptive DIRCM system, both from a phenomenological perspective and from a technical point of view.1 We have not, however, examined size, weight, power, or cost issues. For this work, we have studied a variety of sensing techniques and optical components that will be required for the development of a preemptive DIRCM system.

First, we have assessed radar warning, with threat classification and positioning capabilities. This is a technique that can help the cueing of a DIRCM system (i.e., directing the system to an area of interest) that has optical sensors for target classification (unless this is already achieved with a radar warner). This cueing can also direct the narrow-field-of-view sensor and the laser beam of the DIRCM system to lock onto the target. A high-resolution IR sensor (e.g., a forward-looking IR or IR search-and-track system) can also be used to detect the threat, either by itself or after radar indication. A high-resolution IR imaging system, with a pixel pitch down to 8μm, is currently being developed for this purpose.2

Detection systems based on active illumination by lasers also provide some new capabilities that may be relevant for preemptive DIRCM systems. These detection systems can be used to support other radar and passive electro-optical sensors. In addition, optical sensors in a target can give high laser returns. These occur via glints from the front, or especially from the focal planes, of the sensor.3 As such, a tracking sensor can be detected as a steady glint from a point on the ground. Optical tracking of the aircraft can thus be verified. The return from mechanically scanned systems (e.g., reticle seeks and older types of thermal cameras) is modulated and can therefore be used for weapon recognition and optimized jamming. Examples of long-range optics detections and recognitions are illustrated in Figure 1 and Figure 2. We used an experimental DIRCM testbed, which we developed at the Swedish Defense Research Agency (FOI), to make these measurements. 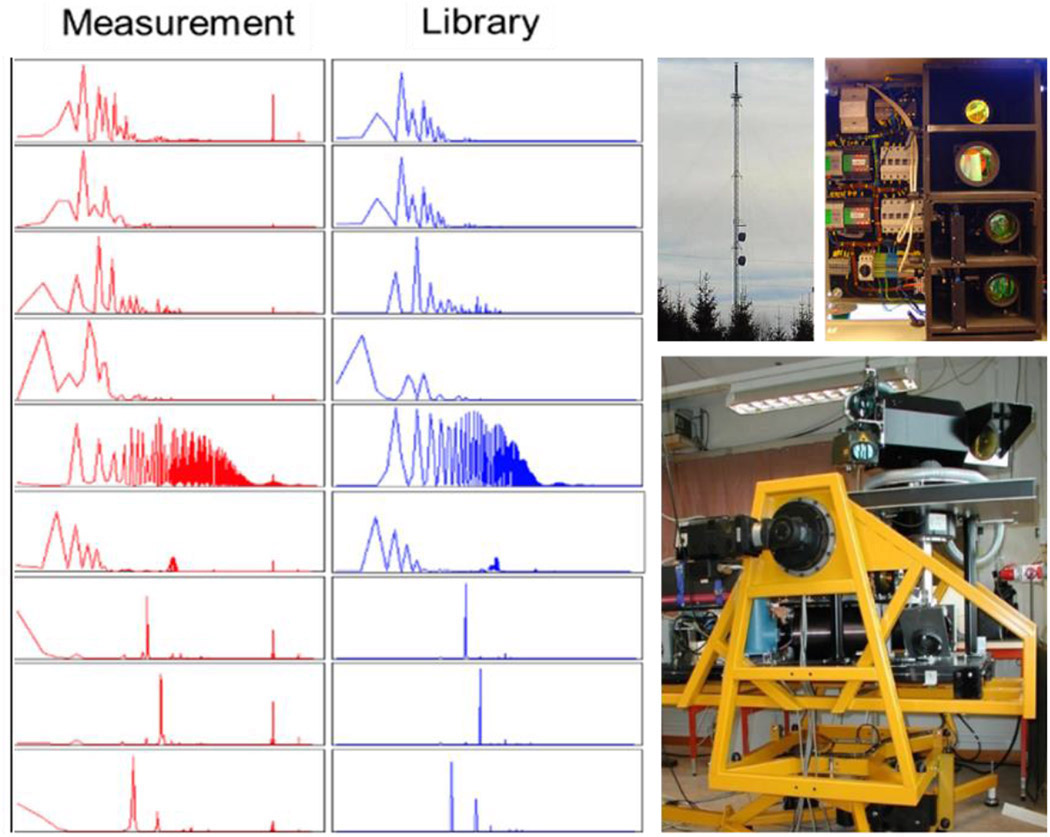 Figure 1. Measured and modeled (library) frequency spectra of laser return signals from surrogate seekers (shown in the bottom right). The surrogate seekers were built to mimic typical reticle seeker modulation and were placed in a box (top right) on a mast (also shown) at a range of 8km from an experimental directional IR countermeasures (DIRCM) testbed. Images courtesy of the Swedish Defense Research Agency (FOI).

Figure 2. Illustration of a long-range optics detection, conducted with the experimental DIRCM testbed. (a) TV and IR images (top and bottom, respectively) of a helicopter at a range of 5km. (b) Dazzled image produced by the IR camera sensor in the helicopter, when illuminated by the DIRCM laser. (c) The tracking accuracy (in cm) based on the laser return in the DIRCM sensor and obtained from its angular encoders. (d) The measured retro-reflex signal from the helicopter IR sensor, which can be used for target identification. Images courtesy of FOI.

In an active imaging technique—which could potentially be part of a preemptive DIRCM system—we use the relatively high target-to-background contrast that is observed in the near-IR and short-wave IR regions.4 At these wavelength ranges, clothes often appear bright. It is therefore common for weapons to be revealed when they are observed against a background of clothes. Another important property of our active imaging approach is its range gating. We use this gating for target–background separation, and also for 3D imaging so that we can achieve efficient template matching during the recognition process. Furthermore, we can use this 3D imaging technique to make observations through vegetation and camouflage.5, 6

Laser range finders are often used within antiaircraft systems for target acquisition. In addition, laser beam riding may be used for missile guidance in these systems. A laser warning system is then able to provide threat classification and direction finding. Our investigations show that the most demanding task in this process is obtaining an efficient target detection at ranges that exceed the weapon range. For optics detection and recognition in the IR region, however, larger focal plane arrays—with high sensitivity and high time resolution—need to be developed. Although recognition of mechanically scanned sensors is relatively straightforward, this is not so for staring sensors (which require multispectral or very high range resolution profiling to be recognized). Target identification or classification conducted with passive or active imaging requires high resolutions (thus large optics and a small pitch). In future preemptive DIRCM systems, this function could be carried out with a target imaging pod that has the necessary capabilities.

In addition, achieving efficient laser counteraction—through laser dazzling or damage—requires lasers that operate in the 10W (or several 100mJ/pulse) region, with narrow beams (a few tenths of a mrad). Several laser wavelengths must be covered to efficiently deny optical tracking from different threats. We have also found that effects related to the airborne platform (e.g., plume and aero optics) can limit the performance of the DIRCM systems. This is especially true for the functions that occur between detection and laser counteraction, in certain angular intervals. We find, however, that atmospheric turbulence is not severe for slant paths when the platform is above 50–100m.

We have investigated the potential of developing a robust preemptive DIRCM system. So far, our work indicates that realization of such a system will be a demanding endeavor (from several points of view). For instance, multi-wavelength lasers are required to obtain full spectral coverage. In addition, optics search and detection capabilities require sensitive focal plane arrays. We also find it difficult to envisage a way to combine all the necessary system functions into a single unit. It may be possible, however, to share functionalities between the DIRCM unit and a targeting pod. In our team at FOI, we are continuing to work within the area of laser countermeasures, with particular focus on optics detection, sensor jamming, and sensor protection.

Ove Steinvall received his MS in physics from the University of Uppsala, Sweden, in 1969 and his PhD from Chalmers University of Technology, Sweden, in 1974. Between 1977 and 2011 he led the Laser Group at FOI, where he has since been a senior laser expert.