A spectrum-splitting film is used to combine photovoltaic and solar thermal technologies in a new approach for the continuous generation of affordable electricity.
21 September 2015
Zachary Holman and Zhengshan (Jason) Yu

Cheap, low-emission, and uninterrupted power generation is the ultimate goal of the renewable energy revolution, and the first two of these targets are well on the way to being met with the use of photovoltaic (PV) modules. In the past five years, China has brought its manufacturing might to PV module production, companies have learned to cut installation times in half, and module efficiencies have increased by a third. Consequently, the cost of PV electricity has dropped below that of competing fossil fuels in several markets. However, photovoltaics will always remain a daytime-only power source, and the effect of this intermittency on the power grid becomes more severe as additional PV modules are installed. In some areas of Germany, for example, PV power must be dumped on sunny days and there is little incentive to install additional PV modules because of the poor match between supply and demand.1 Consequently, cost-effective energy storage solutions are crucial if PV technology is to provide more than 10% of the world's electricity.2

Although batteries pair well with PV systems, recent cost reductions (e.g., Tesla's Powerwall for residential applications) have been insufficient and battery storage is still too expensive for utility markets.3 Thermal energy storage is a cheap and proven alternative. In this technology, heat is generated and then retained in molten salt, within an insulated tank, for conversion to electricity at a later time with the use of a conventional steam turbine. Thermal energy storage is also complementary to solar power generation because sunlight concentrated on a black surface can be used to generate heat. Concentrating solar thermal power (CSP) plants that use this technology have been installed around the world in the past decade, but the cost of their generated electricity is uncompetitive (partly because they have substantially lower efficiency than PV).

We have been investigating ways to combine PV and CSP systems to achieve high sunlight-to-electricity conversion efficiencies, while also taking advantage of low-cost thermal storage. We propose a new technology—known as a PVMirror—which splits the solar spectrum and sends wavelengths to either a PV or CSP system, depending on where the wavelengths will be used best. In our PVMirror (see Figure 1), we use commercial silicon PV cells laminated to glass parabolic troughs, with a plastic dichroic mirror film sandwiched between. A PVMirror can be thought of as a curved PV module with an advanced antireflection coating, or as a (spectrally selective) CSP reflector with PV cells affixed to its rear. We have designed PVMirrors to be drop-in replacements for the conventional silvered reflectors in existing CSP trough plants, with no alteration to the CSP thermal receivers at the line focus of the reflectors.

Figure 1. Schematic of the PVMirror concept. This hybrid of photovoltaic (PV) and concentrating solar thermal power (CSP) technologies is achieved via spectrum splitting. The mirror shown in the photograph and schematic diagram is 6m long in the curved direction (and considerably longer in the other direction).

The dichroic mirror film we use—manufactured by 3M—has a 700–1100nm passband (see Figure 2). It transmits near-IR light to the underlying PV cell, while visible and IR light are reflected (and concentrated, thanks to the curved shape) to the thermal receiver. This split maximizes the overall system efficiency because—as shown in Figure 2—PV cells are more efficient than CSP for photons with energies just above the silicon bandgap (i.e., 1.12eV or 1100nm), whereas wavelength-agnostic CSP beats PV for higher and lower energies (which either cause thermalization losses or are not absorbed at all in the silicon). 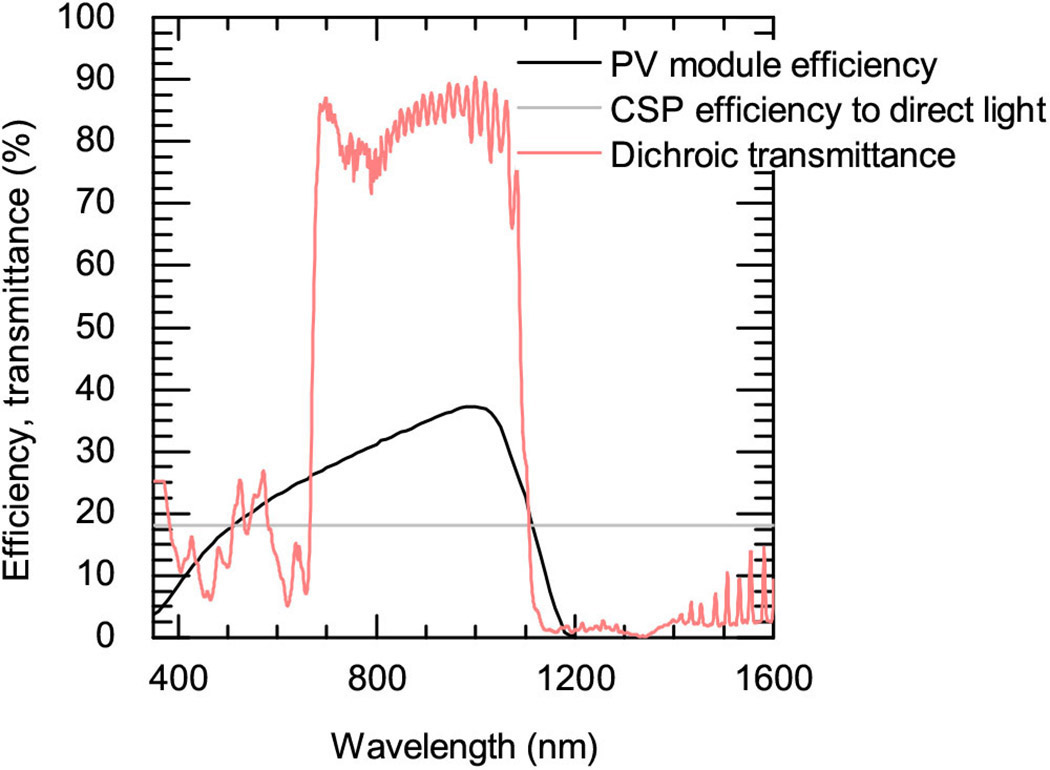 Figure 2. Spectral conversion efficiencies of a silicon PV module (black line) and CSP system (gray line). The transmittance of a 3M dichroic mirror film is also shown (red line). Absorption in the film itself is negligible, and therefore all light that is not transmitted is reflected.

We have modeled PV/CSP hybrid power plants in Phoenix (AZ) and Miami (FL), which are based on state-of-the-art silicon PV and CSP trough technologies, to determine their annual average efficiency.4 We find (see Figure 3) that a hybrid plant can operate at more than 20% efficiency in Phoenix and more than 18% in Miami, which is at least as high as a PV plant and considerably higher than a CSP plant. Part of the reason that our PVMirrors enable such high efficiencies is that—unlike CSP and other purely concentrating systems—they convert some of the diffuse light to electricity (the photons that are transmitted to the silicon PV cell). Furthermore, if about 80% of the heat generated by the CSP side of the hybrid plant is stored and converted to electricity at night, a plant in Phoenix will have the same absolute storage capacity as the Solana plant in Arizona (a 2014 CSP plant that puts about 40% of its heat into storage, as shown by the black and orange dots in Figure 3). 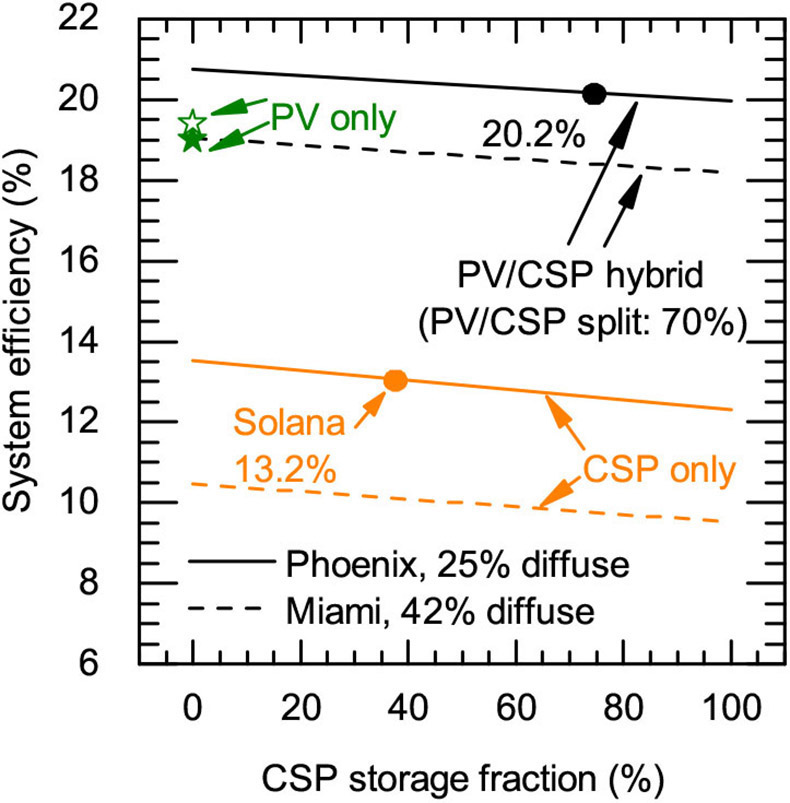 We have also begun fabricating and testing PVMirror prototypes. As the dichroic mirror is at the heart of our technology, we have investigated three different designs: a 48-layer dielectric stack of silicon dioxide/titanium dioxide deposited on a silicon PV cell; a similar dielectric stack deposited on a glass trough; and a free-standing polymer film (from 3M), which is described above.5, 6 Our tests indicated that all the dichroic mirrors had a similar optical performance, but were accompanied by different complications when we used them to form PVMirrors. For example, the dielectric mirrors on PV cells require polished cells that are conformally laminated to the trough so that the reflected light is not scattered, and the dielectric mirrors on glass troughs require deposition on a curved surface. We found that the 3M film is the most amenable to the PVMirror technology because it can be included during lamination. Photographs of our prototypes are shown in Figure 4. 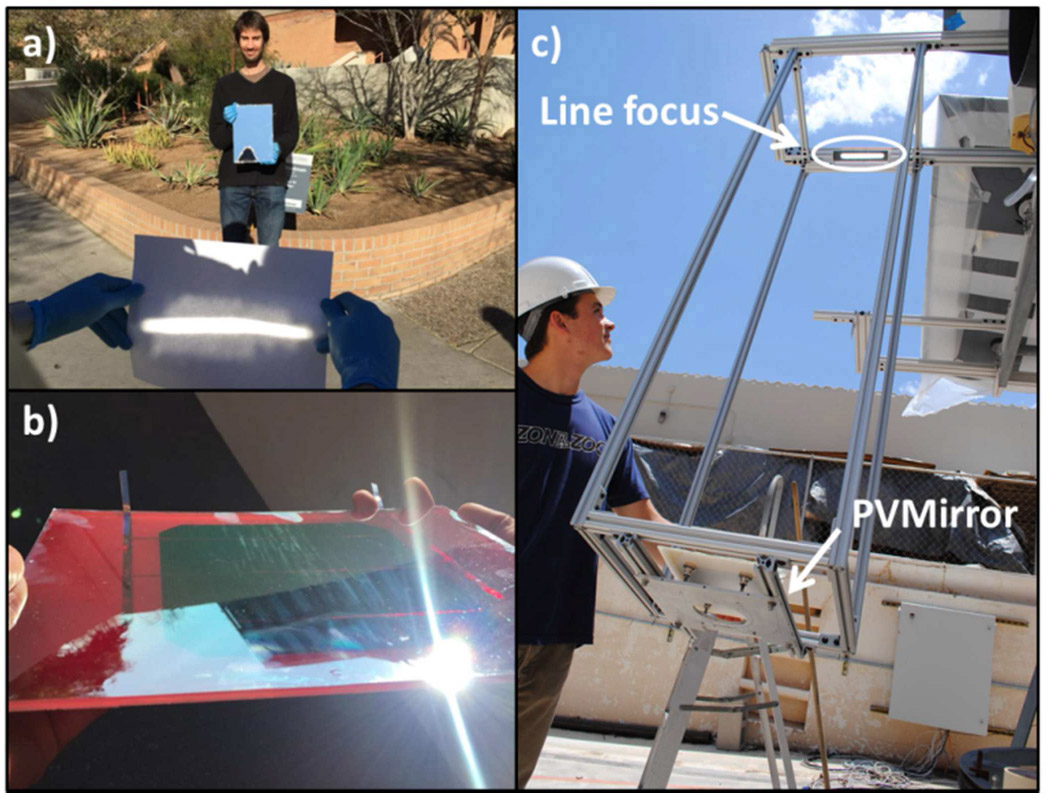 Figure 4. Photographs of (a) a PVMirror reflecting and concentrating visible light, (b) a silicon cell behind the dichroic mirror film that becomes visible at oblique angles, and (c) outdoor testing of a PVMirror mounted on a tracker with a clear line of visible light reflected to the focus.

We have designed a new technology—known as a PVMirror—which combines PV and CSP systems to achieve an affordable and efficient energy storage solution. Currently, we are testing PVMirror prototypes on a sun tracker in outdoor conditions, to determine the electrical and thermal power outputs. We are also in the process of fabricating larger prototypes. Our technology appears to provide a path to highly efficient solar power with storage, but it still needs to be demonstrated at scale and with acceptable projected costs. Our future technical efforts will be focused on eliminating wrinkles in the dichroic mirror film, which can form during lamination. In addition, our market research efforts will be focused on validating our predicted 25% decrease in the levelized cost of electricity, compared with CSP.

The authors acknowledge funding from the Advanced Research Projects Agency (Energy) of the US Department of Energy (award DE-AR0000474).

Zachary Holman is an assistant professor. The work of his research group is focused on new materials and device designs for high-efficiency silicon solar cells and silicon-based tandem solar cells.

Zhengshan (Jason) Yu is a PhD candidate researching silicon-based tandem solar cells. He was the director of the Technology Center (Cell Division) at Solar Enertech Corporation in Shanghai, China, from 2009 to 2013.