Laser diodes that are fabricated from the aluminum gallium indium nitride (AlGaInN) material system are emerging as a technology for defense and security applications (e.g., for free-space laser communications). Conventional underwater communications, which are achieved acoustically, are often associated with very slow data rates and short reaches. They are also particularly susceptible to interception. AlGaInN blue-green laser diode technologies, however, provide the opportunity to achieve both airborne links and underwater telecommunications. These systems can be operated with very fast data rates (i.e., gigahertz levels), long reaches (hundreds of meters underwater), and they can be quantum encrypted. By tuning the indium content of the laser GaInN quantum well, AlGaInN laser diodes can be built to operate over a very wide range of visible wavelengths. Wavelengths of particular interest for free-space communication purposes are the 422 and 486nm Fraunhofer lines, which can be used for low solar background data links. It is also possible to tune from 420 to 500nm, which allows absorption profiles of different water qualities to be obtained. AlGaInN laser diode technology is therefore a key enabler for the development of new disruptive technologies for free-space communications, as well as other defense and security applications.

To date, one of the major limiting factors in nitride laser diode developments has been the lack of a suitable low-defect and uniform GaN substrate. Recently, however, single crystals of large-area, very low dislocation density, and uniform GaN substrates have been grown using a combination of high temperature and higher pressure conditions.1, 2 In these processes, a metal organic chemical vapor deposition (MOCVD) technique is used to grow an AlGaInN laser diode epitaxy on a GaN substrate. The structure is then processed into laser diodes and packaged. In addition, the wavelength of the devices can be tuned by varying the indium composition in the quantum well active region.

We have developed and built new AlGaInN laser diodes and have conducted a series of tests on our devices to verify their applicability to various communications activities.3 The light, current, and voltage characteristics for one of our laser diodes are illustrated in Figure 1(a). This particular device has a 2μm ridge waveguide laser diode structure, as well as an optical power of about 80mW, and a threshold current of about 65mA. In addition, our device—at a lasing wavelength of 410nm—has a threshold voltage of about 5V. A single transverse-mode optical beam profile from our device is also shown—for the slow and fast axes—in Figure 1(b).4 We also tested the free-space data transmission of a 422nm AlGaInN blue laser diode. We measured high-frequency data transmission rates of up to 2.5Gb/s for a laser drive current of 120mA.4

To test the suitability of our AlGaInN laser diode technology for underwater communications, we constructed a GaN laser optical tracking system. We then submerged this system within a water tank and determined its performance in different water conditions (see Figure 2). We varied the water conditions by adding Maalox (i.e., an antacid) to the water. In this process—commonly used in underwater light-scattering experiments—we are able to mimic the volume scattering of seawater particles.5 We tested several GaN laser diodes, which had center wavelengths that ranged from 421 to 425nm. These wavelengths correspond to the lowest attenuation for optical wavelengths in water that is classified as ‘oceanic clear.’ With increasing turbidity, the lowest attenuation values shift to longer wavelengths. 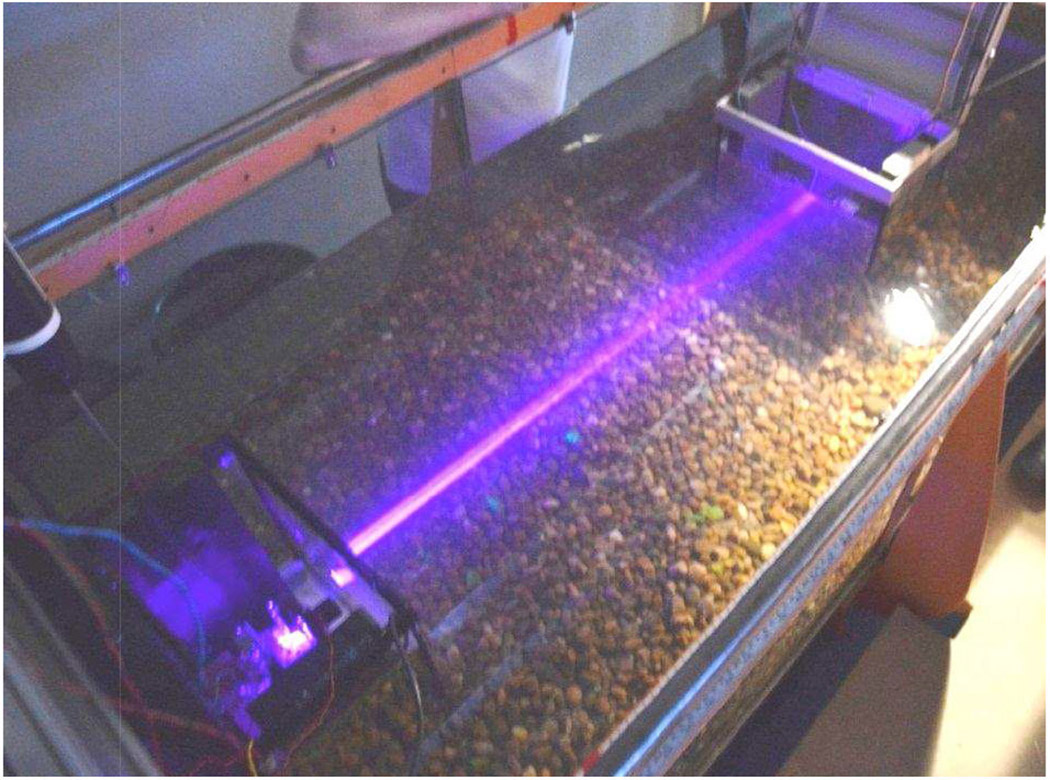 Figure 2. Photograph of gallium nitride (GaN) laser optical tracking system underwater testing. The collimated laser is fired between two nodes that are separated by 1m and submerged in ‘harbor-like’ water.

We measured the frequency response of the GaN laser device, and we conducted eye diagram data transmission experiments underwater. The degree of openness in the ‘eyes’ of these diagrams is a standard way to measure the quality of data transmission. Open eyes show that the intervening water path has no effect on the bandwidth values. We measured a data rate of up to 2.488Gb/s underwater. Although we obtained a relatively noisy eye diagram (because of the modulation bandwidth limit of the photoreceiver), there is still sufficient distinction between pulses to resolve the eyes of the signal, i.e., we have a visual indication that data transmission can be achieved with our laser diodes (see Figure 3).

We have also fabricated a set of GaN laser arrays that can be used for optical system integration applications. For these devices we take advantage of the low defectivity and high uniformity of GaN substrates. In our arrays, each individual laser element can be separately addressed. As such, we find that it is possible to create a multi-wavelength free-space telecom system in a single package that can be used in any water environment.6, 7

We have developed a new class of laser diodes that use the AlGaInN material system. We have demonstrated that high data transmission rates can be achieved with these devices in both free-space and underwater conditions. Our devices thus have several potential uses for defense and security applications. In our future work, we plan to increase the frequency response of our laser diodes and to begin field testing our devices in an open water environment.