The autofocus (AF) function of a camera is traditionally achieved by mechanical movement of the lens,1 and a decade ago AF was considered to be a necessity for only large aperture cameras. The continuous rise of smartphones in daily life, however, has demonstrated that there is also a real need for AF in their miniature cameras (i.e., for scanning bar codes, checks, and business cards). Miniaturization of the traditional mechanical systems in these devices, with the use of voice coil motors (VCMs), was the original approach adopted in the industry to achieve focus tuning.1 In recent years, however, there has been a rising relative cost of such VCM solutions (as well as a decrease in their availability and associated performance problems), which means that alternative approaches are required to achieve AF.1

Although piezo, MEMS, and shape memory elements have also been tested as techniques for achieving AF, VCMs remain the dominant technology (despite the complexity involved with their assembly and operation).1 In all these approaches, the lens of the camera is moved toward, or away from, the CMOS sensor to bring the image into focus. The fundamental optical design of the camera and the related parameters (e.g., aberrations) remain approximately the same.1 There are, of course, some trade-offs. These relate to the imperfections associated with the mechanical movement (e.g., lens tilt) or artifacts (e.g., undesired image magnification).

We have developed an alternative approach to the VCM methodology—based on the use of liquid crystals (LCs)—which is truly motion and deformation free (i.e., ‘solid state’). LCs are hydrophobic materials and so do not require hermetic packaging. Lenses made from LC materials can be fabricated from thousands of the cavities (units) placed in parallel (on wafers or large panels), which dramatically reduces their manufacturing costs.2 We have already demonstrated the excellent performance of these lenses, i.e., extremely low power consumption (about 10μW), very small dimensions (a few hundreds of micrometers thick) and mass (about 20mg), more than 10D of optical power variability (from infinity to 10cm) over a 2mm clear aperture, and about 85% use of the lateral dimensions of the element (clear optical aperture versus the external diameter).2 Thanks to the growth of LCD technologies in recent decades, there is now a huge potential for the manufacture of such LC lenses.

The operation of our nematic LC (NLC) lenses is based on the creation and dynamic control of a spatially non-uniform (lens-like) refractive index distribution across the clear aperture of an element. This is very similar to traditional fix-focus gradient index (GRIN) lenses, as shown in Figure 1(a).3 In the case of the traditional GRIN lenses, both light polarization components—parallel (EII) and perpendicular (E⊥) to the drawing plane (xz)—are focused. Within the NLC, the polarization components can propagate with different phase velocities, which depend on the angle between the long molecular axes of its molecules—see Figure 1(b)—and the polarization of light. We consider the two extreme orientations of the molecules in the same xz plane, such that one (case 1) is parallel with the wave vector of light (along the x axis) and the other (case 2) is perpendicular to it (parallel to the z axis). In both cases, the E⊥ component (ordinary type) propagates with the same phase velocity (i.e., light will experience the same refractive index of the media). In contrast, when the optical anisotropy of the NLC is positive, the EII component (extraordinary type) experiences a higher refractive index for case 2 than for case 1. We can apply various electrode configurations1, 4,5 to exploit this phenomenon and thus generate spatially non-uniform electric fields. These fields are able to reorient the LC molecules correspondingly, by means of the dielectric torque mechanism.6 We carefully design the electric field so that the corresponding molecular reorientation and effective refractive index redistribution allow spherical phase front generation and light focusing, as shown in Figure 1(c). In this particular case, the EII component experiences various refractive index values in the center and the periphery of the element, and is thus focused. The E⊥ component, however, experiences a uniform refractive index and is not focused, as shown in Figure 1(c). Such a lens can therefore be referred to as a ‘half-lens’, i.e., the majority of its applications involve the use of natural (unpolarized) light. As such, the anisotropy of NLC materials, which enables the lens application, can also be a drawback if it is not appropriately addressed.

Figure 1. Schematic illustration of the focusing of two light polarization components—parallel (EII) and perpendicular (E⊥) to the drawing plane (xz)—by (a) a traditional gradient index lens and (c) an electrically tunable liquid crystal (LC) lens. The polarization sensitivity of the light propagation process within a (b) LC and a (c) LC lens is also illustrated. Filled ellipses in (b), labeled 1 and 2, indicate the long molecular axes of the LC molecules.

Several approaches have been considered to deal with this problem. The most straightforward of these approaches is the use of a linear polarizer, which allows the passage of only one light polarization component (i.e., EII).7 With this methodology, however, the energy efficiency of the imaging system (particularly important for mobile imaging applications) is significantly reduced. A second approach involves the use of two NLC half-lenses to build a ‘full lens’ (see Figure 2).1 In this technique, the two half-lenses have their molecules aligned in perpendicular planes, i.e., each operating with one polarization component of light. In this case, the two NLC layers must operate in a similar way and must be positioned as close together as possible so that the separation of focal distances (for the two perpendicular polarization components) can be avoided. The corresponding ‘polarization’ aberrations associated with this approach have been demonstrated as negligible for miniature cell phone cameras when the thicknesses of the substrates (used to build two NLC sandwiches) are on the order of 100μm or less.8 Furthermore, images that we have obtained using such lenses (see Figure 3) indicate that near (i.e., the bill at about 0.1m) and distant (i.e., the flowers and resolution chart at about 1.5m) objects can be photographed with excellent quality.2 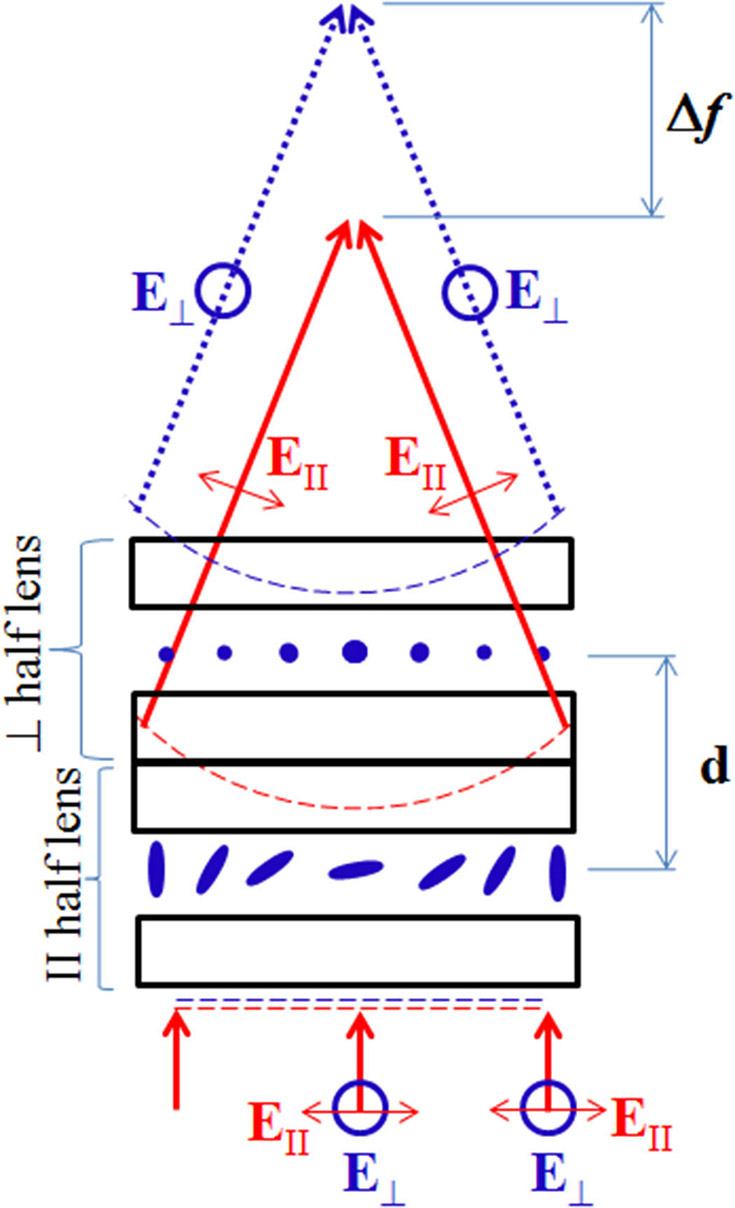 Figure 2. Schematic diagram showing the focusing of unpolarized light with a transmission geometry of two ‘cross-oriented’ LC layers. The two layers are positioned with the smallest possible spacing (d) so that the focal distances (Δf) of the two perpendicular polarization components are not separated. 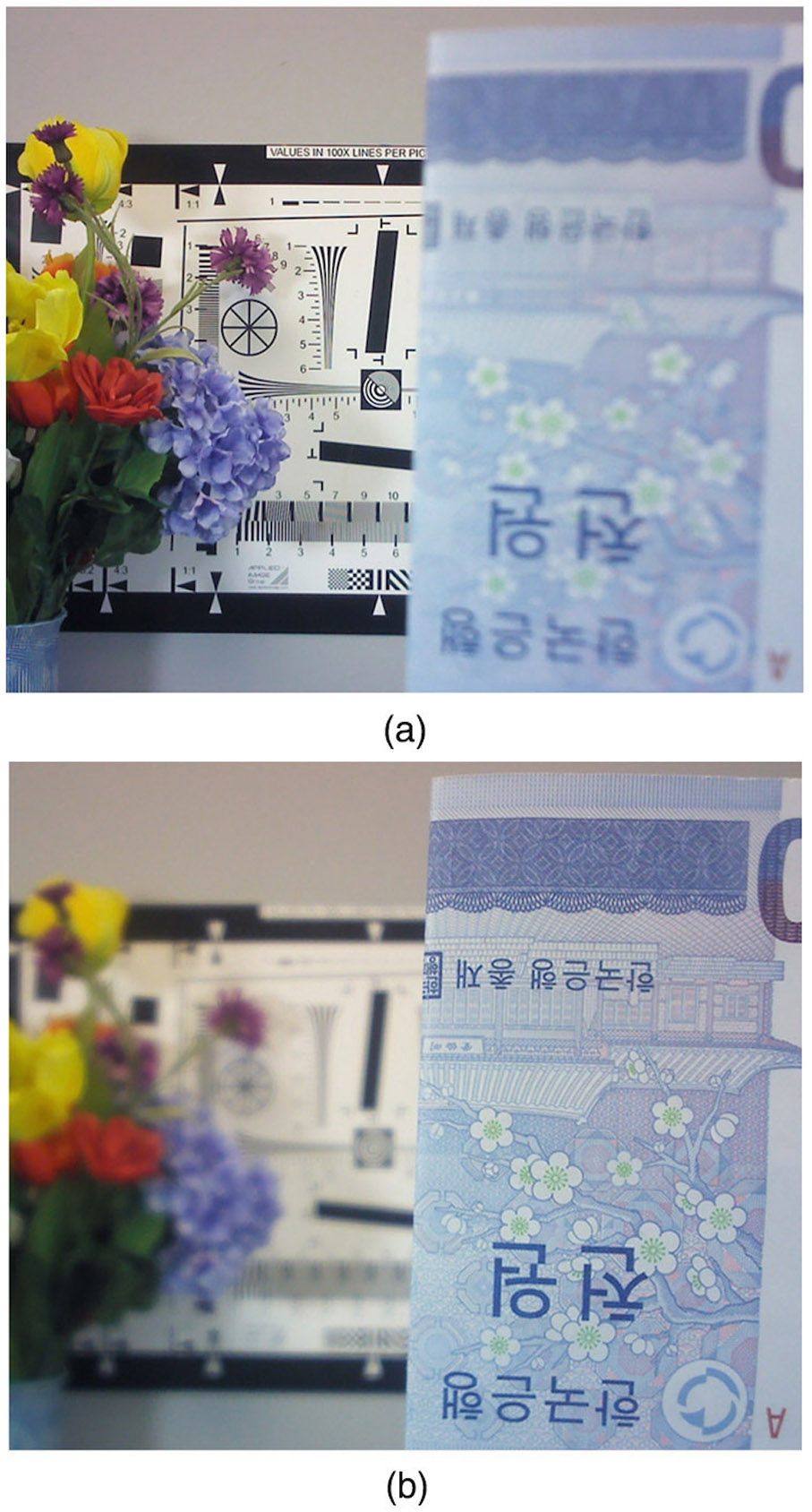 We have developed another solution to the potential anisotropic problem. In our approach, which is relevant when the imaging system involves light reflections,9 we use commercially available thin anisotropic quarter-wave polymer films to construct a very simple scheme.10 We use a single NLC layer to achieve focusing of both light polarizations with a reflection geometry (see Figure 4). Given that our NLC molecules are aligned in a particular plane (of the drawing in Figure 4), the ordinary (i.e., E⊥) polarization component is not focused after the first passage through the NLC layer. With the double passage through the quarter-wave plate (with optical axis oriented at 45° to the plane of the drawing), however, the E⊥ component is rotated by 90° after reflection from the mirror. As such, this polarization component enters into the same LC layer as the extraordinary polarization component (EII), which is focused. We can achieve the inverse of this situation when the initial incident light (i.e., entering from the bottom in Figure 4) is EII. In this case, it is focused during the first passage through the NLC layer and will not be focused during the second passage. If the quarter-wave plate and the mirror are integrated closely enough (on the substrate of the NLS sandwich), then the focusing distances for both polarization components will be very similar.10

Figure 4. Schematic illustration of the reflection geometry focusing scheme. Only the case for ordinary incident polarized light (E⊥) is shown.

We use NLC materials—with intrinsic anisotropies—in a new method to achieve autofocusing with small mobile cameras. In addition, we have found a way to properly address the anisotropic characteristics and to design an imaging system in which the polarization dependence is minimized. At present, our most effective and industrially proven approach is to use two NLC layers.2 Numerous ‘folded’ optical designs (which involve reflections), however, can also be used. These involve the use of a single NLC layer, combined with a thin quarter-wave plate.10 Our electrically variable LC lenses have already been introduced into the mass market in the form of webcams and smartphones. Our next generation of lenses will have even higher optical quality and will incorporate multiple functions into the same element (e.g., autofocus and optical image stabilization). We will also use a tunable mirror approach for optical zoom applications. An additional future application of this technology will be in ‘smart LED’ lighting, in which our devices already display extraordinary performance.

Tigran Galstian received his MSc and PhD from the Moscow Engineering Physics Institute. He is now a professor and the Canada Research Chair in Liquid Crystals and Behavioral Biophotonics. He is also the chief technology officer of LensVector Inc. (Sunnyvale, CA). His main research interests are self-aligned molecular systems, and he has co-authored more than 550 scientific communications.