Organic molecules used as luminophores (i.e., those with luminescent properties) have found one of their largest fields of application in organic LEDs (OLEDs). Since the introduction of OLEDs in 1987,1 researchers have had to consider the disadvantageous but intrinsic nature of organic electroluminescence that dictates the formation of three triplet excitons for every one singlet exciton.2 Because the transition from triplet to ground state is quantum mechanically forbidden, triplets cannot spontaneously emit light. As a result, this state is considered a ‘dark’ state in OLEDs, and their maximum efficiency is capped at ∼25%.

Two classes of emitter molecules have been introduced with the aim of overcoming this spin-related issue.3 The first class consists of molecules that incorporate heavy transition metal atoms, like iridium. These make use of strong spin-orbit coupling, which works to unlock a radiative transition from the triplet state and additionally funnels singlets to these emissive triplet states, leading to phosphorescence. Alternatively, the structure of purely organic molecules can be designed in a way that allows thermal upconversion from triplet to radiative fluorescent states (intersystem crossing, ISC). These classes make use of the emission of triplet and singlet states, respectively.

In recent years, we have been exploring possible methods for initiating both fluorescence and phosphorescence from organic molecules (biluminescence) at room temperature:4–6 see Figure 1. Although phosphorescence in organic molecules is very weak due to its quantum mechanically forbidden nature, it can be observed at very high efficiency if competing non-radiative channels are suppressed effectively. This opens up the possibility of a novel class of materials with ultra-broadband emission stemming from two independent states, with the overall balance of the emission dictated by the mixing between the different spin excitons. 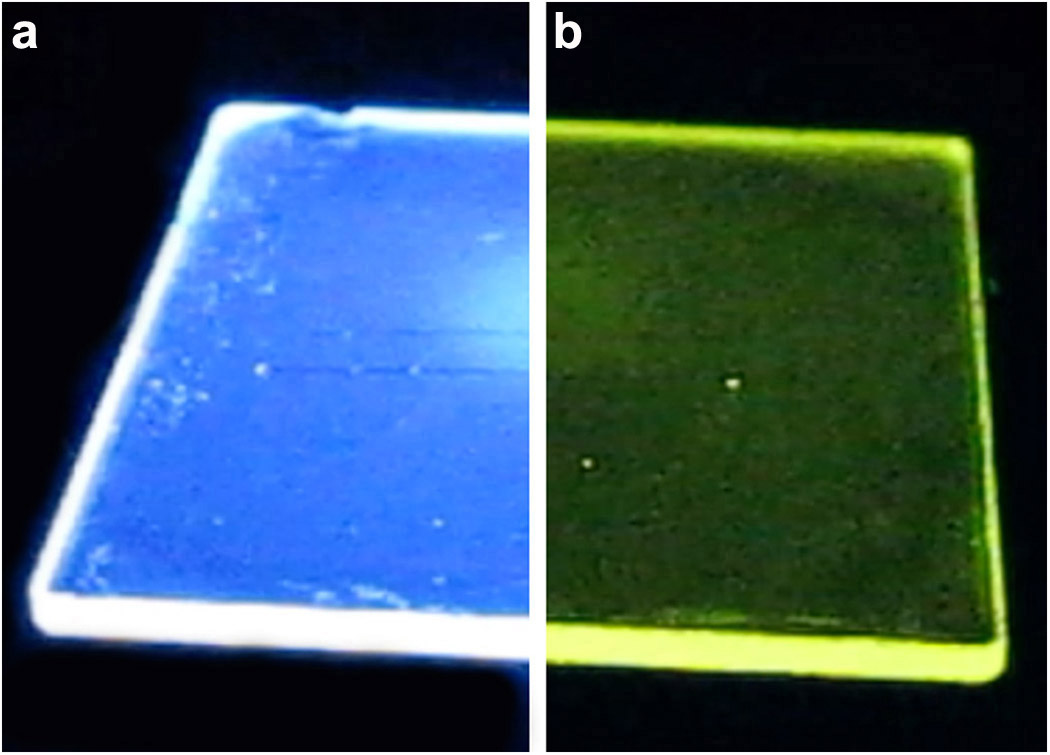 Figure 1. Photograph of an organic biluminophore—N,N'-di(naphtha-1-yl)-N,N'-diphenyl-benzidine (NPB)—diluted at 2wt% into poly(methyl methacrylate) (PMMA) and spun as a film onto a quartz slide. (a) Luminescence from the singlet state S1(fluorescence), observed under UV illumination. (b) Luminescence from the triplet state T1(phosphorescence). This picture is taken within 500ms of UV illumination being turned off.

Two characteristics make biluminescent emitters particularly attractive for further study and application development. First, due to the efficient luminescence from both spin states (i.e., singlet and triplet, S1 and T1), potential loss channels for the excitons residing on these molecules (i.e., ISC and non-radiative deactivation in the triplet manifold) are effectively locked out. A transfer from one spin manifold to another via ISC does not reduce the overall number of excitons, but rather changes the relative contribution of fluorescence and phosphorescence. Mixing between S1 and T1 can therefore effectively alter the overall ultra-broadband emission of the biluminophore. Second, the coupling from T1 to the ground state (S0) is very weak in purely organic semiconductors.7 In the case of efficient room-temperature phosphorescence, as observed in the biluminophores, it is only the relative strength of the non-radiative rate from T1 to S0 (indicated in Figure 2) that is strongly reduced.8 The overall low rate for phosphorescence remains unchanged. Consequently, phosphorescence has a very long excited-state lifetime, reaching hundreds of milliseconds to single-digit seconds.5, 8 This is between a million and a billion times slower than the spin-allowed fluorescence originating from the singlet state S1, itself having typical lifetimes in the nanosecond regime. The overall emission from a biluminophore is therefore associated with an extremely large dynamic range: see Figure 2. 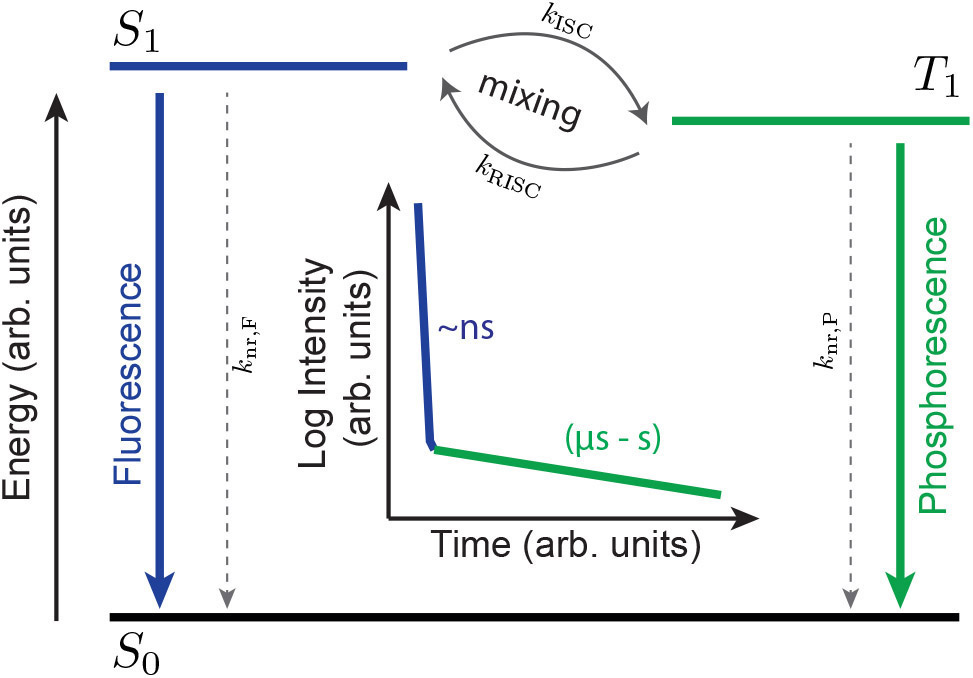 Figure 2. Illustration of the properties of organic biluminophores. Energy diagram of an organic molecule, where emission is observed from (S1) and (T1). Mixing between the two is mediated via intersystem crossing (ISC) and, if energetically allowed, its reverse process (RISC). Dashed lines indicate non-radiative (nr) rates for fluorescence (F) and phosphorescence (P), respectively, which are suppressed or outcompeted in highly efficient biluminophores. Inset: Schematic dynamic range of a biluminophore. Fluorescence happens on the nanosecond timescale, whereas the weak phosphorescence of organic molecules is defined by a very long excited-state lifetime. arb. units: Arbitrary units. k: Transition rate.

The key to unlocking persistent phosphorescence in organic semiconductors lies in engineering the matrix material that surrounds the luminescent molecules. We have shown that the non-radiative phosphorescence (nr,P) rate, knr, P, can be suppressed to a level that almost mimics the low-temperature properties, where knr, P∼0, via the formation of a rigid polymer matrix material. Under these conditions, the energy of the excited states cannot be easily dissipated by mechanical motion (i.e., phonons) and, as a result, photon emission becomes the most probable channel of deactivation. To promote this de-excitation route, we diluted emissive organic material into poly(methyl methacrylate) (PMMA).5 Alternatively, both deuterization of the emitting molecules and the use of steroidal host materials can be employed to similar effect.8

Figure 3 shows the fluorescence (S1) and phosphorescence (T1) of various conventional organic semiconductor molecules (diluted at 2wt% in a PMMA matrix), obtained at room temperature. The results, based as they are on a variety of organic molecules, show the generality of biluminescent behavior. Additionally, the concept of suppressing non-radiative rates from T1 to S0 proves useful in the field of triplet-state spectroscopy. For example, we were able to directly measure the phosphorescence spectrum of dilute anthracene (2wt% in PMMA) and tetracene—2wt% in poly(4-bromostyrene), PBrS—with associated triplet energies of 1.83 and 1.34eV, respectively, at room temperature. PBrS, a special host polymer, introduces rigidity but also strengthens the radiative transition from T1 to S0 due to an external heavy atom effect.5, 7 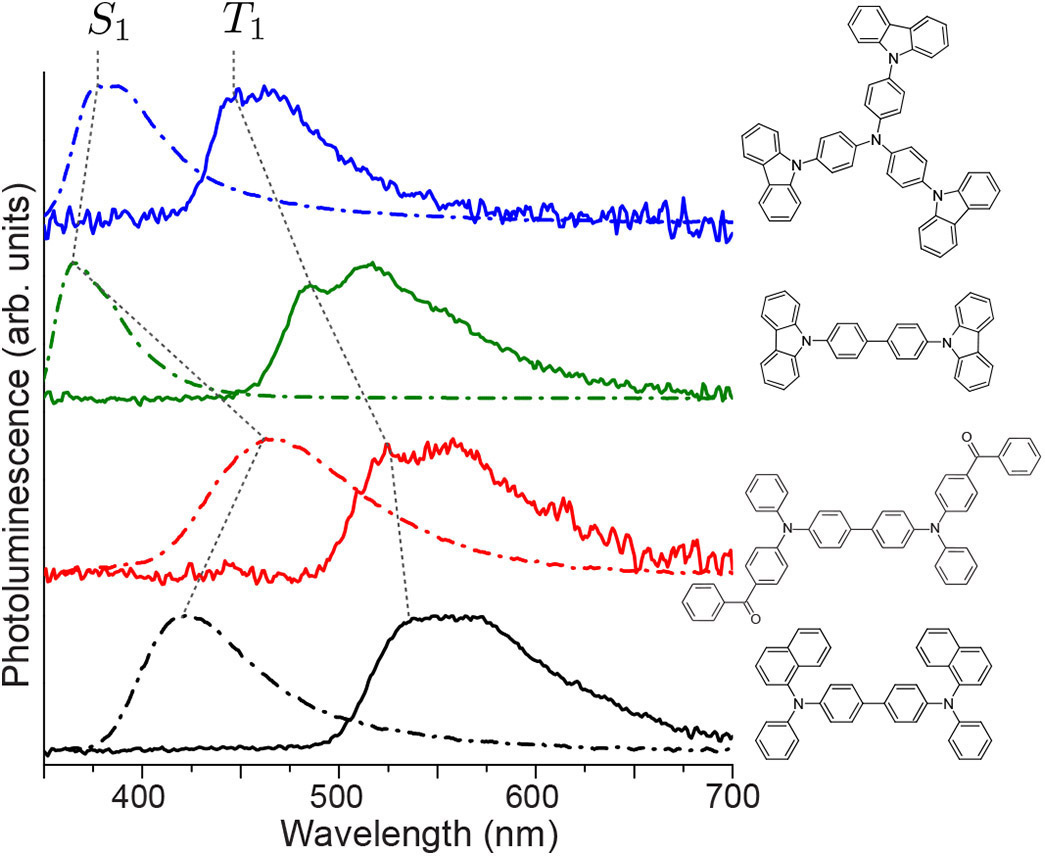 In summary, biluminescence has developed into a thoroughly optimized and unique emissive system. Among the characteristics obtained through this system, the most significant is the ability of biluminophores to offer direct access to the radiative states of both spin manifolds (singlets and triplets) in organic molecules without the requirement for special or complex material combinations. As a result, an exciton is given the chance to re-emit its energy, regardless of its initial state.

In future work, we intend to increase the toolset of organic biluminophores by screening materials to determine the structure-property relationships behind persistent phosphorescence, and to identify molecular building blocks that are suitable for the development of future materials. In addition, we will intensify our exploration of biluminescence for future applications (e.g., sensing).

The authors are grateful for the support of the German Excellence Initiative via the Cluster of Excellence EXC 1056 Center for Advancing Electronics Dresden (cfAED). Sebastian Reineke would like to acknowledge the funding received from the German Research Foundation (DFG) through a research fellowship (RE3198/1-1).