Terahertz (THz) waves (i.e., with frequencies of 0.3–30THz and wavelengths of about 1mm to 10μm) have several potential applications, such as for cancer treatments,1 weapon and drug security screenings,2 as well as high-speed and high-capacity optical wireless communications.3 Quantum cascade lasers (QCLs) are the only solid-state sources that emit light at THz frequencies with power outputs of more than 1W.4 Light emission in QCLs is achieved with the use of optical transitions that occur between subband (i.e., subdivisions of a band) levels in semiconductor superlattices. QCLs can therefore potentially be used for the realization of compact, high-power, and narrow linewidth devices that have continuous wave (CW) operability. Although THz QCLs were first demonstrated in 2002,5 there is still ongoing work to improve their operation and usage.

Since their first introduction, THz QCL devices based on gallium arsenide (GaAs) have developed rapidly. With the design of active regions and metal waveguide structures, the lasing frequency range of the devices has been extended from 1.2 to 5.2THz,6, 7 and the maximum operating temperatures have increased to 199.5K (pulsed)5 and 117K (CW).8 The frequency range from 5.3 to 12THz, however, remains unexplored and unused. The impact of THz applications and the potential of THz QCLs are therefore substantially reduced. It is thought that THz waves with frequencies of 5–12THz can be used to identify materials such as water, pigments, and semiconductors (as these substances exhibit unique absorption spectra between 5 and 25THz).9, 10 In the 5–12THz range, however, GaAs materials have strong light absorption characteristics. This is because of electron-longitudinal optical (LO) phonon interactions. It is therefore difficult to operate GaAs-based devices in this frequency range.

We have therefore examined group III-nitride semiconductors as potential materials for THz QCL devices.11 Materials such as gallium nitride (GaN), aluminum gallium nitride (AlGaN), and aluminum nitride (AlN) have much larger LO phonon energies (more than 18THz) than GaAs-based materials. It should therefore be possible, with these substances, to realize THz QCLs that cover the 5–12THz frequency range. We have also introduced a novel active region with a ‘pure three-level’ laser design in our test devices.11 This quantum cascade (QC) design is limited only to the three subband levels that contribute to the emission scheme. This means that we can achieve good control of a complicated band in the presence of an internal electric field. 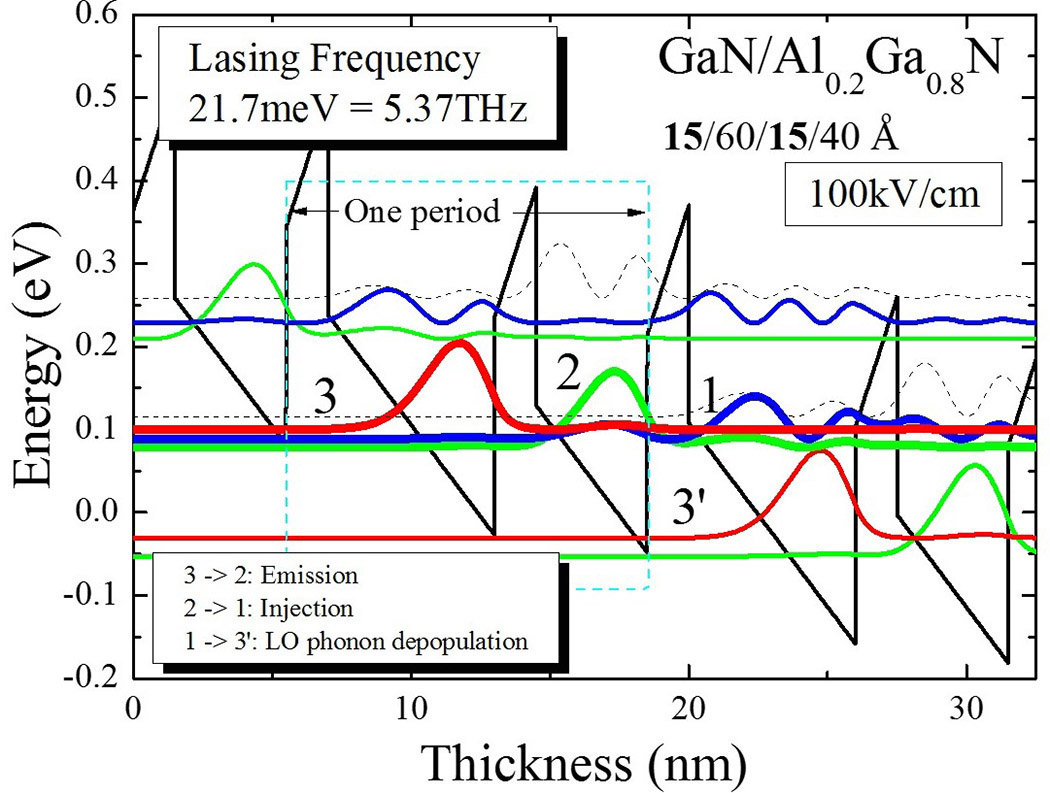 We have used a variety of techniques to construct our new QCL devices (see Figure 2). As shown in Figure 2(a), the layered GaN/AlGaN QC structures are sandwiched by silicon-doped GaN and AlGaN contact layers. We used a radio-frequency molecular beam epitaxy technique to grow the GaN/AlGaN QC structures. In addition, we grew the contact layers on a high-quality AlGaN/AlN template that itself was grown, via metal organic chemical vapor deposition (MOCVD), on a c-plane—i.e., the (0001) Miller index plane—sapphire substrate. To encourage the scattering of electrons by LO phonons and to achieve the population inversion condition, we silicon-doped the 60Å-thick GaN wells within the QC structures by 5×1017cm−3. The laser ridge structure in our devices has a resonant length of 1.14mm and a width of 120μm. We used a single metal waveguide structure for the fabrication of our devices. In the final step, we wire-bonded and mounted the devices onto a gold-nickel heat sink, as illustrated in Figure 2(b). 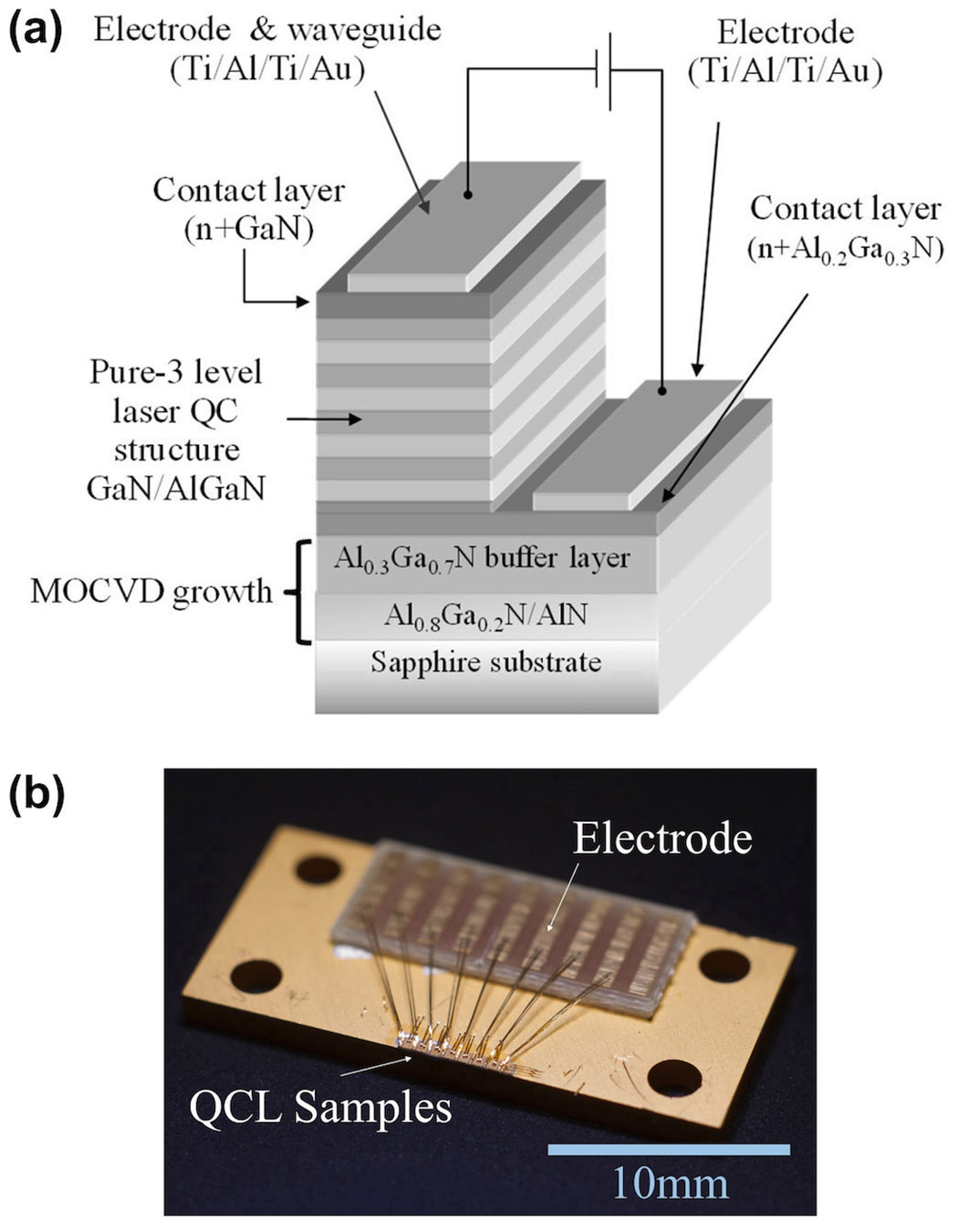 We have obtained a frequency spectrum (see Figure 3) from our GaN-based THz QCL device that has the quantum design shown in Figure 1. We used pulses that were 200ns wide, and repeated at 980Hz, to obtain this spectrum at a temperature of 5.6K. As can be seen in Figure 3, we observed the lasing spectrum with a peak frequency of 5.47THz. The threshold current (Ith), threshold current density (Jth), and the threshold voltage (Vth) of this sample were 3.5A, 2.75kA/cm2, and 16.5V, respectively. We also used MOCVD to grow a similar pure three-level design for a GaN/AlGaN QCL structure. We achieved lasing at 6.97THz for this device, which had Ith, Jth, and Vth values of 1.0A, 0.75kA/cm2, and 27.0V, respectively (measured at 5.2K). 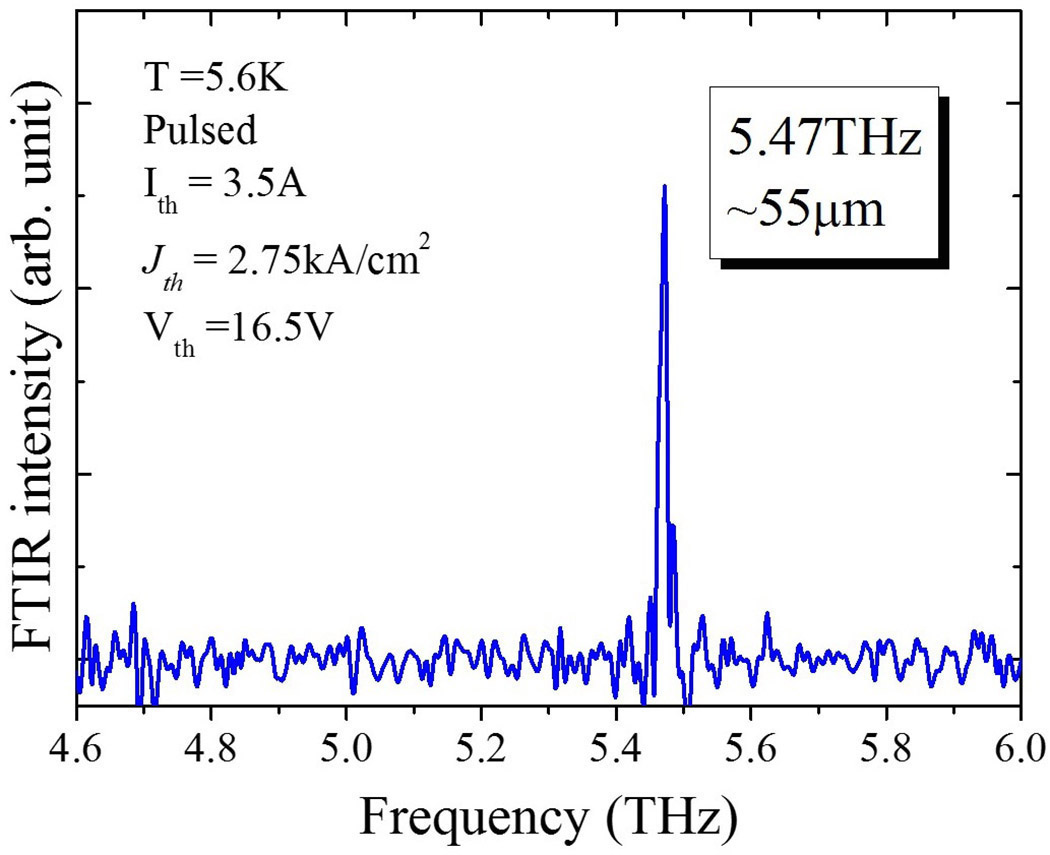 We have successfully grown GaN-based THz QCLs and have achieved lasing with such devices for the first time. With this lasing action, we are able to produce light emission at 5.47 and 6.97THz from our devices. As part of our work, we have introduced a unique quantum design of a pure three-level laser system. We now plan to improve the properties of our GaN-based devices. We will improve the crystal quality of our QC structures and increase the number of active layers (to increase the optical confinement factor).

Wataru Terashima has a PhD in engineering. He specializes in developing group-III nitride semiconductor materials. He also works on developing semiconductor lasers that operate in unexplored wavelengths between near-IR and THz regions.