Self-adaptive holography is an interferometric method in which a Kerr-like medium is used—instead of a beam splitter—to recombine the interfering beams. A Kerr medium is characterized by a light-induced optical phase shift (Δϕ) that is proportional to the light intensity (I) itself. As such, a Kerr medium can respond dynamically to light intensity variations. Adaptive interferometers can therefore be used to reduce the problems that are associated with low-frequency environmental fluctuations, and to remove the requirement for optical path interferometric stabilization or heterodyne detection.1 Within a specific bandwidth (B) of an adaptive interferometer—defined by the response time of the Kerr effect—noise and low-frequency fluctuations can be filtered. This filtering process increases the signal-to-noise ratio of the signal in situations that involve complex wavefronts (e.g., diffused light from rough surfaces or disturbed environments). Consequently, it may be possible to improve the detection capabilities of classical interferometers.

Since adaptive holographic interferometry (AHI) methods (e.g., those based on the photoconductive effect1 or photo-refractive crystals2) were first developed, they have shown great potential for several different applications. These include image storage and processing,3 measuring small displacements,4, 5 and vibration analysis of reflecting objects.6–8 A similar technique has also been used to achieve acousto-optic imaging through highly scattering biological media.9 In addition, new media have been proposed to increase the sensitivity of optical fiber sensors and accelerometers. Such media include rare-earth-doped fibers for homodyne adaptive detection,10 saturable lasers for adaptive gain interferometers,11 phase-conjugated optical amplifiers,12 as well as optically addressed spatial light modulators (SLMs) for adaptive interferometry and detection of small displacements with speckled beams.13

We have developed a new AHI approach that is realized with the use of liquid crystal (LC) media (e.g., optically addressed LCs, or LC on silicon—LCOS—SLMs).13, 14 Our self-adaptive scheme is based on digital holography, which is becoming an important technology15 in various fields (e.g., metrology, non-destructive testing, microscopy, and 3D imaging).16 Our use of LCs in this context brings several advantages. The LCs provide a wide active area, good spatial resolution, large optical response, and good tunability with external electric or magnetic fields. LC-based light modulators—with temporal responses that range from tens of hertz to several kilohertz—are now commercially available. Furthermore, the optical response of LCs extends from visible to microwave wavelengths. This permits a large choice for the range of their operation.

The physical mechanism that serves as the basis of our AHI method is two-wave mixing in a Kerr-like medium. As illustrated in Figure 1, the signal that comes from a scattering object is sent to the Kerr medium along with a reference beam. From the resulting interference pattern of these two beams, a refractive index grating is induced and an adaptive hologram (AH) is realized. Within a certain frequency bandwith (B), our AH responds dynamically to low-frequency variations and high-frequency (i.e., frequencies greater than B) spectral components of the temporal phase modulation are transmitted to the diffracted orders. We are then able to directly measure these as intensity variations.13 With our AH we are also guaranteed linear detections, even with speckled beams.4

Figure 1. Schematic diagram of an adaptive holographic interferometer. An adaptive hologram (AH) is generated by sending a reference (R) and a signal (S) beam onto a Kerr-like medium. These two beams are issued from the same laser and are separated by a beam splitter (BS). The signal is a retro-diffusion from a scattering object. The light intensity diffracted by the AH is recorded by a photodiode (PD) that is connected to a computer, where the output photocurrent signal (iPD) is delivered. An impression of the retro-diffused speckle beam is shown on the right, above the signal beam.

Within our practical setup, we use a camera and an SLM to synthesize the equivalent of a Kerr medium (see Figure 2). To achieve this synthesis, we use an appropriate signal processing technique to couple the camera and the SLM. The combination of their functions provides the desired response (because Δϕ is proportional to I), which we then use to realize an AHI. 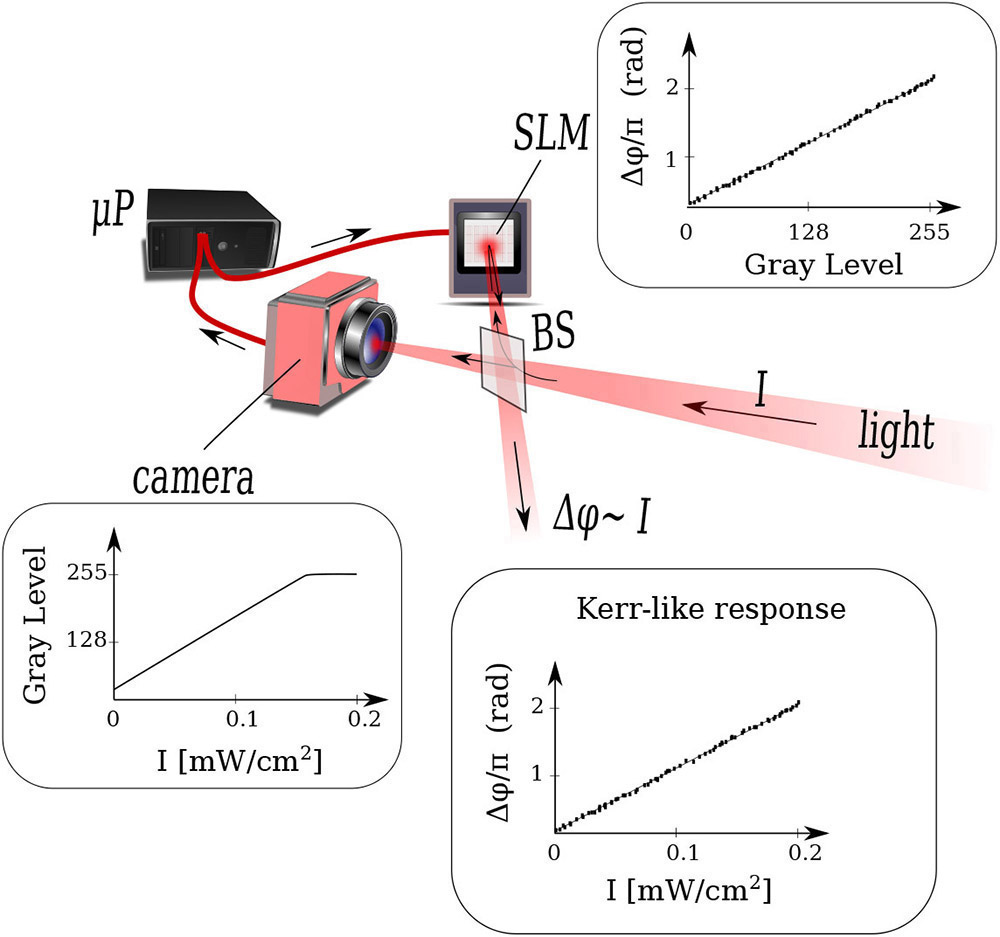 Figure 2. A schematic diagram of the digital holography process. An appropriate signal processing technique is used to couple a camera and a spatial light modulator (SLM) and therefore realize a Kerr-like response. The light intensity distribution (I) of a beam is measured by the camera and converted to a pattern of gray levels. The SLM transforms the gray levels in phase changes (Δϕ). The combination of the camera and SLM functions provides the Kerr-like response, i.e., Δϕis proportional to the intensity (as shown in the bottom inset). μP: Microprocessor.

Our AHI—see Figure 3(a)—is composed of a CMOS camera and an LCOS SLM. The CMOS and LCOS SLM have the same pixel size (8μm), are placed symmetrically at ±45° from a 50% beam splitter, and are precisely imaged onto each other. The bandwidth of our AHI (60Hz) is determined by the frame rate of the LCOS. During operations, two coherent beams (a reference and a speckled signal) are separated by the beam splitter and subsequently sent to interfere on the CMOS and LCOS. The resulting interference pattern is then displayed (in real time) on the LCOS to generate a complex phase hologram, which is the image of the incident holographic pattern on the CMOS. We use the LCOS SLM hologram to diffract the incident reference and signal beams in real time. These two beams are then reflected back by the rear mirror of the LCOS. The signal itself is phase-modulated (at a frequency much greater than B), while the reference output intensity is recorded by a photodiode. An example diffracted reference beam spectrum (measured with the photodiode) is shown in Figure 3(b). 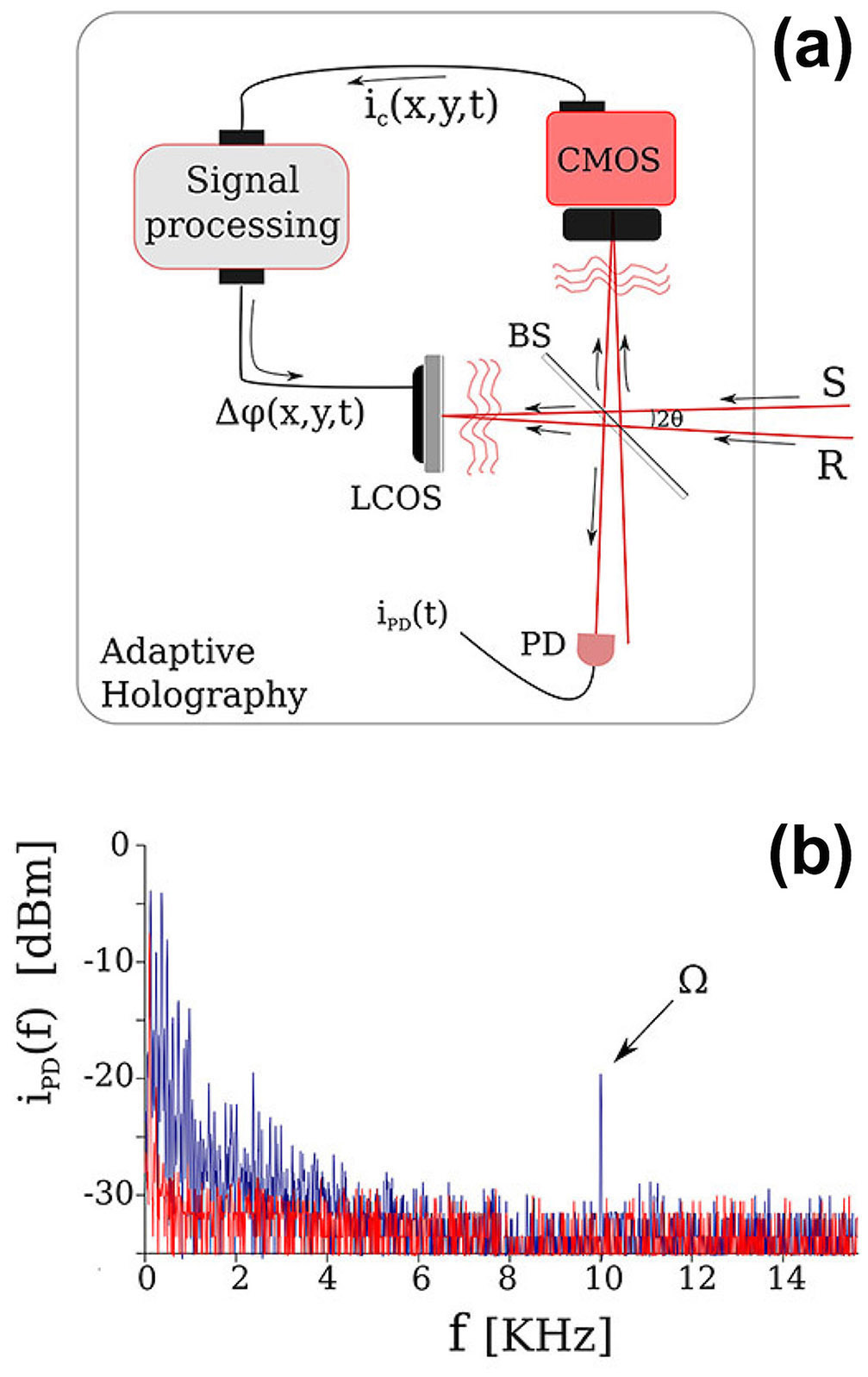 Figure 3. (a) An illustration of a CMOS-liquid crystal on silicon (LCOS) adaptive interferometer. The interference pattern is acquired by the CMOS camera and the image, ic—measured in x and y dimensions and in time (t)—is sent (after appropriate signal processing) to the LCOS spatial light modulator. The light intensity diffracted by the hologram in the LCOS, iPD(t), is then recorded by the photodiode (PD). (b) A representative signal spectrum, as recorded by the PD. The CMOS-LCOS system (blue line) is clearly able to detect a vibration at a frequency (Ω) of 10kHz. With a classical interferometer (red line), however, this vibration is hidden by noise (caused by the complex wavefront and fluctuations of the interfering beams).

We have shown that AHI can be performed efficiently with the use of LC media. In addition, we have demonstrated that Kerr-like properties can be realized with our AHI approach, through the use of CMOS-LCOS digital holography. We can therefore exploit these features of our technique to create adaptive interferometric systems that can detect very low-amplitude phase modulations of both speckled and distorted beams. The high performance characteristics of our digital configuration have been made possible because of progress in the technologies associated with spatial light modulators and photodetector arrays. In addition, our ability to add an electronic processing stage has also led to the optimization of the efficiency of our AHI system.14 Our digital AHI technique therefore provides a higher degree of flexibility compared with conventional adaptive interferometric schemes. Our future work will involve optimization of the signal processing stage. This will allow us to further improve the performance of our AHI technique, in terms of bandwidth and signal-to-noise ratio. We are also currently developing optical sensing applications of our approach.

The authors acknowledge support for this work from the General Directorate for Armament (contract ANR-14-ASMA-0004-01, HYDRE).

Stefania Residori received her PhD from the University of Florence, Italy, in 1989. She is currently research director at the CNRS.