In a new approach, the magnitude and direction of current in an applied electric field are varied to create an internal magnetic field and manipulate spin.
17 August 2015
Marta Luengo-Kovac and Vanessa Sih

Spintronics is the study of the intrinsic spin of electrons in solid-state devices. Manipulating such spins for computational applications has become an intriguing prospect. Indeed, two types of spintronic devices that are currently on the market—giant magneto-resistive hard drive read heads and magnetic random access memory—rely on spin currents and magnetic materials to read and store information. A spintronic device made entirely of electrical semiconductor materials, however, would provide greater compatibility with integrated circuits.

To produce an all-electrical semiconductor device, the creation and manipulation of spins with the use of an electric field must be demonstrated. Both these tasks are possible because of spin–orbit coupling, i.e., the motion of an electron is coupled to its spin. Such spin–orbit coupling gives rise to spin splitting, which is dependent on momentum and is related to the breaking of spatial inversion symmetry. This spin splitting causes spins to behave as if there is a surrounding effective magnetic (or spin–orbit) field. An electric field can therefore accelerate the electrons and change the direction of their spins.1

Several semiconductor features can cause spatial symmetry breaks (e.g., the crystal structure, built-in electric fields, and strain). The contributions of these different effects mean that the direction and magnitude of the spin–orbit field depends on the direction of the momentum. We have therefore been able to develop an approach to control the spin–orbit field. In our technique we vary the magnitude of the current and the direction of the crystal axis along which the current is applied. The crossbar pattern that we use to control the direction of the in-plane current is shown in Figure 1(a). With this geometry we can use an applied electric field to create an internal magnetic field, with which we can manipulate spin. 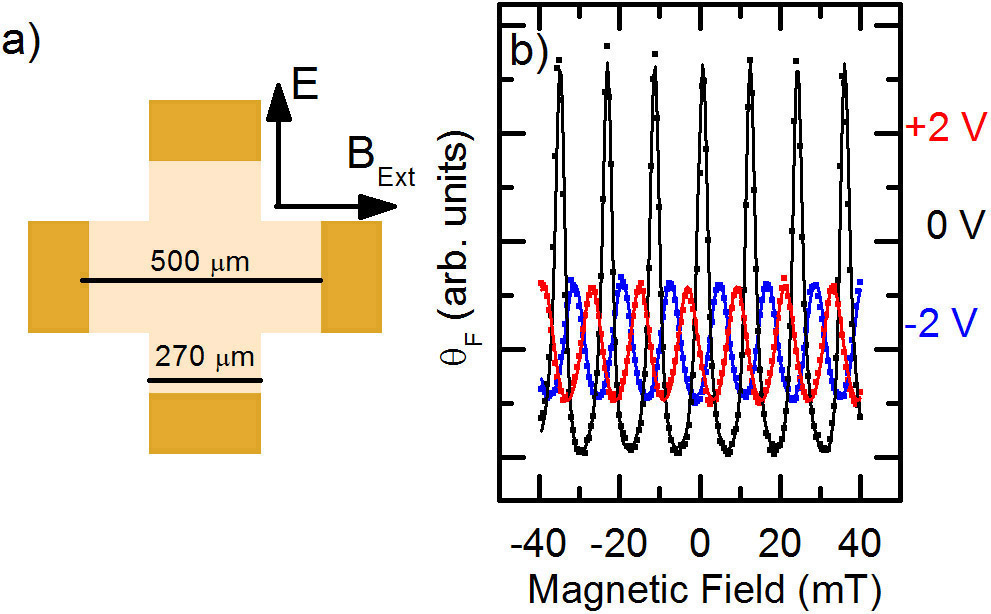 crystal axes, etched on a semiconductor sample to control the direction the in-plane current. The sample can be rotated by 90°for measurements along either crystal axis. The placement of the electrical contacts is shown in gold. During the measurements, the electric field (E) was applied perpendicular to the external magnetic field (B) so that the spin–orbit field was parallel to the external field. (b) Faraday rotation of the spin–orbit field, shown as a function of the external magnetic field for applied voltages of +2V (red), 0V (black), and –2V (red). arb: Arbitrary.

We can quantify the direction and magnitude of the spin–orbit field by making temporally and spatially resolved optical measurements. For these measurements we use an ultrafast laser with a pump pulse to introduce spin polarization. We then measure this polarization with a subsequent probe pulse. We obtained such data—see Figure 1(b)—at three different voltages, with a fixed time delay between the pump and probe pulses. This data exhibits sinusoidal oscillations, as a function of applied magnetic field, because of spin precession. We find that the component of the spin–orbit field that is parallel to the external magnetic field causes the curve to shift horizontally, whereas the perpendicular component causes a decrease in the relative magnitude of the center peak.1, 2

The strength of the interaction between a spin and a magnetic field can be quantified with a constant, which is known as the ‘g-factor.’ Electrical spin manipulation can also be achieved by electrically controlling the g-factor.3 This effect has been attributed to the electric field shifting the electron wave function into a barrier, and has previously been demonstrated in quantum wells and quantum dots.4, 5 We recently discovered that the g-factor in a bulk indium gallium arsenide epilayer can also change under the influence of an applied electric field (see Figure 2).6 More work, however, is required before we will be able to develop a quantitative model for this phenomenon. Understanding the change in the g-factor as a function of electric field is also important, so that the magnitude of internal effective magnetic fields (produced by spin–orbit coupling and nuclear spin polarization) can be determined correctly. For example, our measurements along the [110] crystal axis reveal that the g-factor is −0.4565±0.0001 and that the spin–orbit field is 3.53±0.01mT for the largest applied voltage. In contrast, time-dependent measurements give a spin–orbit field value of only 0.965±0.054mT. In such measurements, it is assumed that the g-factor does not change with electric field and the spin–orbit field is determined from the Larmor precession frequency at a fixed applied magnetic field of 0.2T.

Figure 2. The (a) g-factor and (b) spin–orbit field magnitude, both plotted as a function of drift velocity for the [110] and

crystal axis directions of the sample shown in Figure 1(a). Parabolic fits to the g-factor measurements are given as a guide and are less accurate at higher drift velocities. The slopes of the lines in (b) provide the spin–orbit field proportionality constant.

Electrical generation of spin polarization is the second component necessary to realize an all-electrical semiconductor spintronic device. This process was first demonstrated in 20047 and has been attributed to electron spins aligning along the spin–orbit field that is created upon application of an electric field. We therefore expect the efficiency of electron spin generation to be proportional to the magnitude of the spin–orbit field. To test this hypothesis, we used the crossbar sample geometry shown in Figure 1(a) to systematically vary the the spin–orbit field. Our measurements, in fact, showed the opposite trend. We observe the largest current-induced spin polarizations for directions that correspond to the smallest spin–orbit field, and vice versa.8

We have developed an approach to control spin–orbit fields within semiconductors and therefore make progress on creating an all-electrical semiconductor spintronic device. We have also made a set of optical measurements to verify our technique. Our results are promising, but more work is required to develop a theory that describes the electric field dependence of the g-factor, as well as the relationship between spin–orbit fields and electrical spin generation efficiency. We are currently studying the dependence of current-induced spin polarization on semiconductor composition, doping density, and mobility. We hope this work will allow us to develop a phenomenological model for this process.