Bacteria thrive in microbial communities or ecosystems of mixed populations that interact and cooperate to create a favorable microenvironment for growth.1 For example, waste products of certain bacteria could serve as nutrients to others. Similarly, fermentation processes induced by some bacteria may provide a suitable microenvironment for other bacterial species that favor low pH conditions. Isolation of independent bacterial species from various environmental sources has profound implications in all branches of microbiology, including diagnosis of infectious diseases and the field of microbial diversity. However, modern separation methods based on culturing bacterial samples are lengthy, limited in throughput, and potentially disruptive to microbial diversity.

Efforts to separate distinct bacteria date back to the early years of bacteriology. In the late nineteenth century, Roberth Koch—commonly known as the father of medical microbiology—developed simple, but ingenious methods for obtaining and growing pure cultures of bacteria.2 Key to his success was the use of solid media, consisting of a mix of agar and other nutrients. His approach is still the ‘gold standard’ in medical microbiology, but in today's modern techniques different growth requirements are exploited for different bacteria. Distinct species can thus be isolated in a similar fashion to Koch's work.

We recently put forward a novel optical technique for carrying out bioparticle separation based on small variations in physical properties (size, shape, or density), as illustrated in Figure 1.3 Unlike conventional approaches based on Koch's work, our platform offers separation of different species in real time, without lengthy culturing processes. Furthermore, our technique opens the door to separation of individual species with close genetic relationships, without destroying microbial diversity. 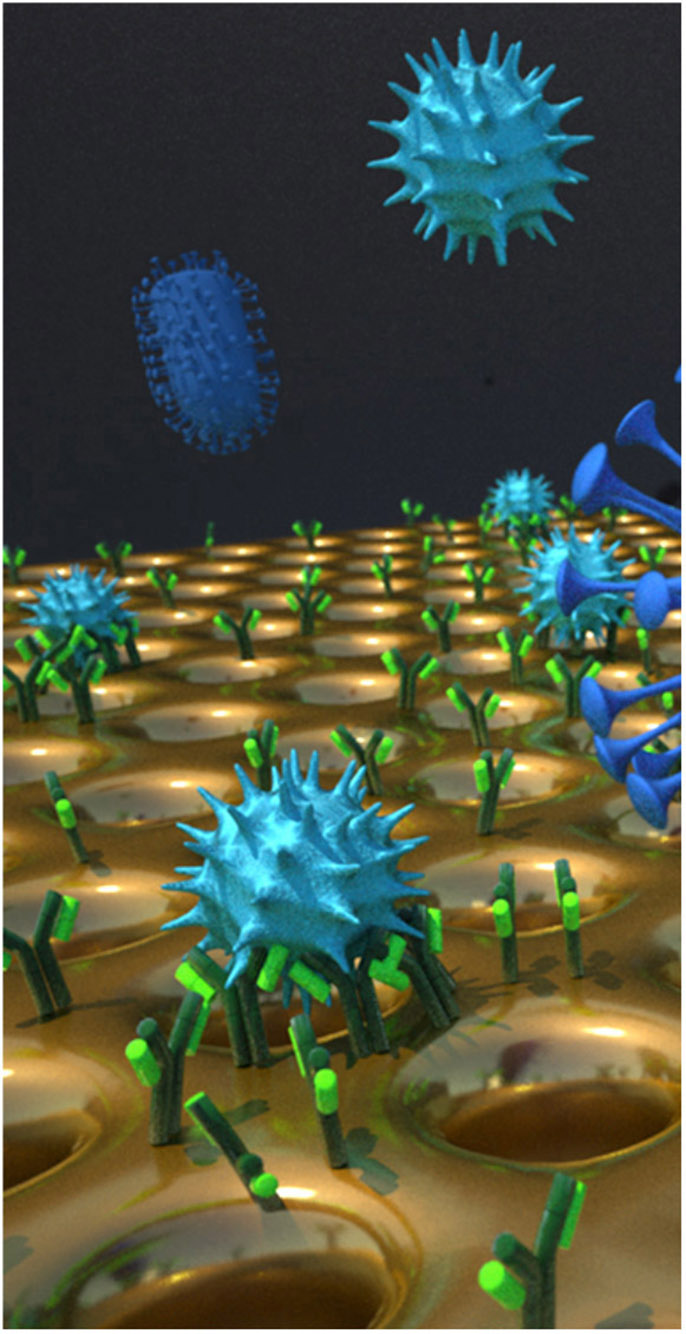 Key to our novel sorting technique is the adaptation of plasmonic nanolenses for optofluidic separation of tiny particles.4 Nowadays, tweezers—based on optical forces caused by the transfer of photon momentum to microscopic particles—are routinely employed for trapping and manipulating tiny bioparticles in liquid environments.5 Although these advances illustrate remarkable technical achievements, optical tweezers use conventional objective lenses to focus light. As a result, they cannot be scaled to meet the high throughput needs of bacterial sorting applications.

Stimulated by the discovery of the extraordinary transmission (EOT) effect through subwavelength nanohole arrays (see Figure 2),6 in our approach we use plasmonic nanoholes to modulate the optical phase front of the incident light and to achieve broadband light focusing to diffraction-limited spots. In EOT phenomena, light is coupled between the two surfaces of optically thick metal films through subwavelength apertures and the excitation of surface plasmon polaritons. Ebbesen and coworkers6 discovered that for certain geometries and periodicities of subwavelength apertures, light transmission through a nanohole array could be orders of magnitude greater than that predicted by Bethe's theory. By modulating the geometrical factors of the arrays, one can control the transmitted light spectra (resonance wavelength) and hence the color of the array (see Figure 2). 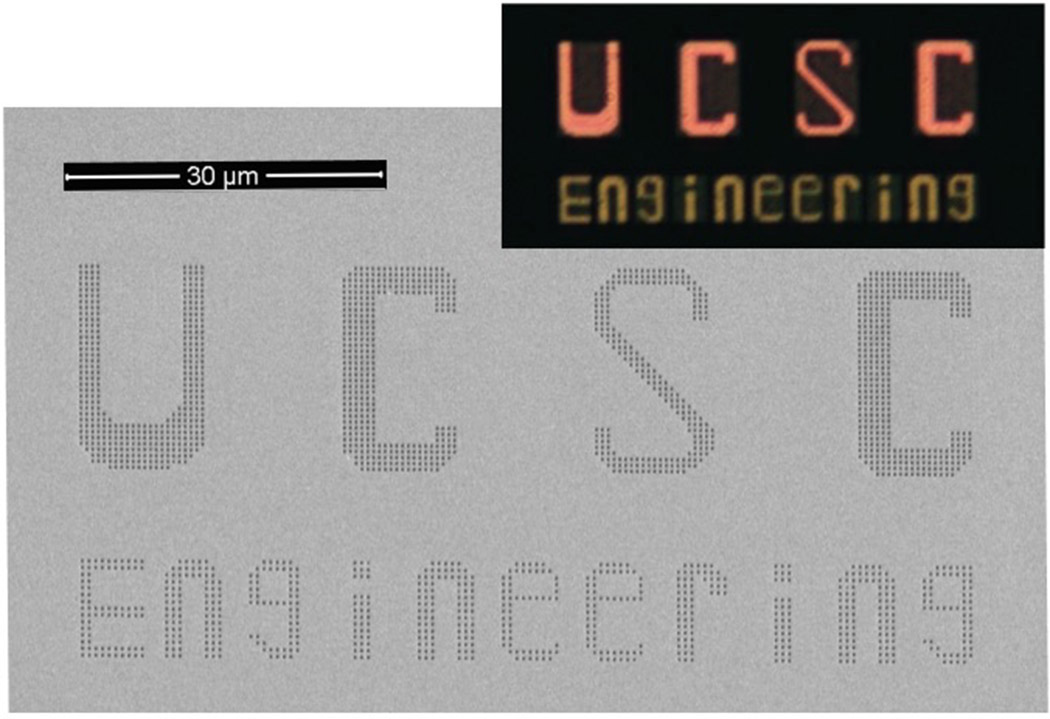 Figure 2. Extraordinary transmission of broadband incident light through a metallic film with subwavelength nanoapertures. The color variation between ‘UCSC’ and ‘Engineering’ is caused by a difference in resonance wavelength that arises from the engineered nanoscale features. (Courtesy of X. Zhu and R. Rashid.)

The EOT effect is generally described by theoretical predictions based on infinite and repetitive nanohole arrays on metal surfaces. On the other hand, finite-size nanohole arrays offer some new and exciting possibilities. For example, one could exploit well-defined phase shifts that are experienced by light as it leaks through individual nanoholes between metallic surfaces. With the proper arrangement of individual nanoholes relative to each other, it is possible to create a curved phase front for the transmitted light and achieve focusing of the incident plane wave to microscopic dimensions (see Figure 3). Using this approach, optical lenses only 100nm thick—with a footprint that is comparable in size with that of a blood cell—could be created on transparent substrates. Arrays of tiny plasmonic lenses (each with an area of 5 × 5μm) integrated on a chip allow us to perform more than one million particle sorting processes in parallel on a single glass slide (see Figure 4). Furthermore, plasmonic lenses offer direct coupling of collimated incident light and can be used to achieve strong optical forces without resorting to alignment-sensitive and expensive lasers. In our recent work, we demonstrated that incoherent light sources such a LEDs or typical white light sources available in commercial microscopes can generate optical forces (through plasmonic focusing) that are strong enough to allow us to separate tiny particles with dimensions similar to bacterial species. 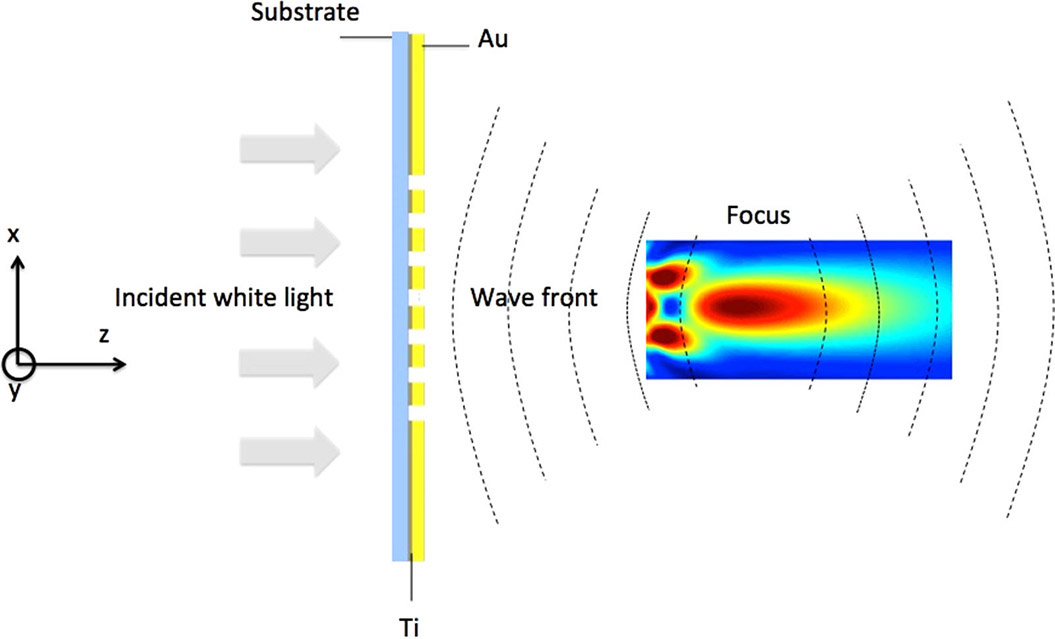 Figure 4. The planar nature of the plasmonic lenses leads to their massively parallel integration on a chip (left). A single plasmonic lens has a footprint of only 5 × 5μm (right).

Beyond enabling massive parallelization on a microfluidic chip, the in-plane geometry of the plasmonic lenses (flat optics) endows them with particularly attractive features. The sorting mechanism in plasmonic lenses relies on a suitable balance between scattering, drag, and gravitational forces. At the focus point of a plasmonic nanolens, the laser radiation pressure can be balanced with the drag force (which originates from fluidic flow) to separate microscopic particles with varying characteristics. The size and refractive index of particles are two main factors that determine size-based separation conditions. The balance between optical and fluidic forces can be adjusted through incident light intensity to selectively sort different sized particles. This approach is demonstrated in Figure 5 for two different sized bioparticles. For small particles, about the size of a bacterium (200nm), the fluidic drag forces are stronger than the optical forces. For bioparticles larger than 900nm (e.g., platelets, and red and white blood cells), however, the optical forces dominate the fluidic drag force. Since the physical dimensions of the bioparticles determine the dominating counteracting force, different bioparticles flow in separate directions. Furthermore, tiny variations in the refractive indices of biological samples lead to strong differences in optical forces. This interesting effect permits isolation of even subtle intrinsic differences among genetically similar bacterial species (such as Bacillus anthracis Sterne strain and Bacillus thuringiensis) and the classification of biological samples.7 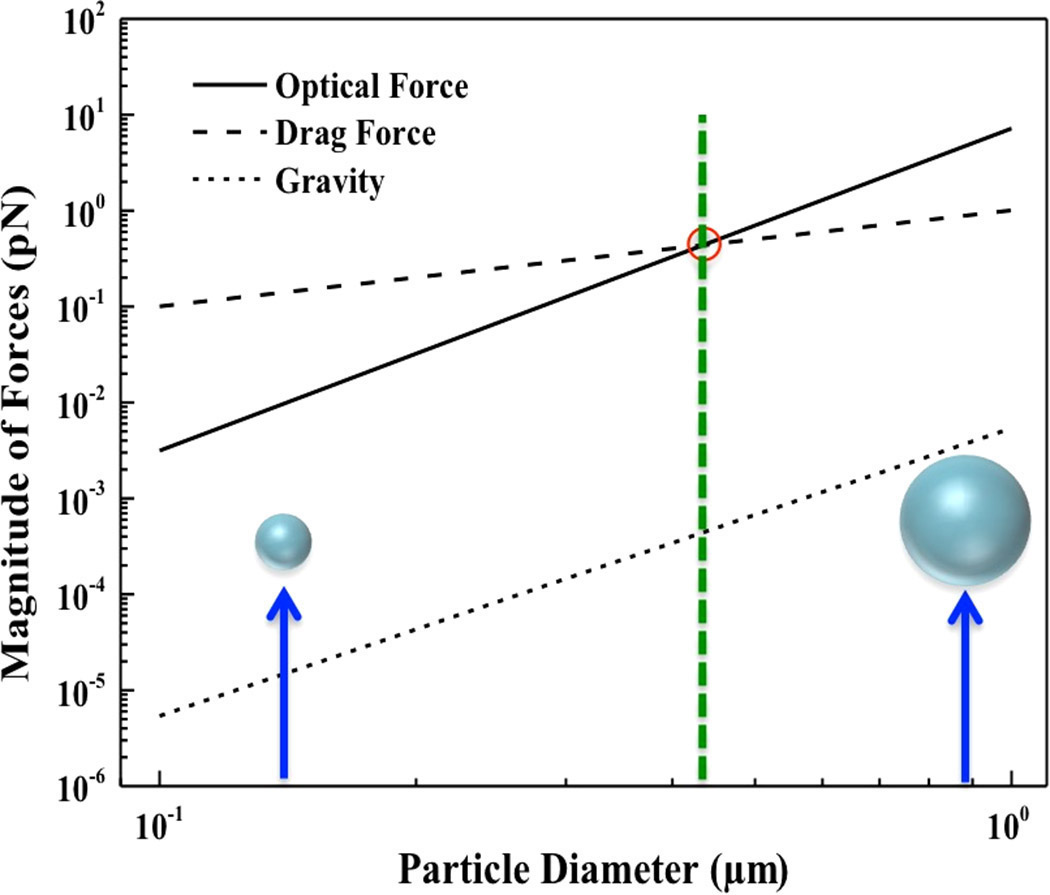 Figure 5. At the focus point of a plasmonic nanolens, the laser radiation pressure can be balanced with the drag force that originates from fluidic flow. Optical forces allow us to separate tiny particles with dimensions of 0.1–1μm. Blue circles indicate two bioparticles, one with the size of a bacterium (200nm) and one with the size of a human cell (900nm).

In summary, we have demonstrated that optical scattering and counteracting fluidic drag forces can be exploited to sort tiny bioparticles using plasmonic nanolenses, i.e., miniature versions of optical lenses defined on a flat gold surface. Our technique allows high-throughput sorting of single bacterial cells thanks to our planar integration and perpendicular excitation scheme. Beyond the focusing effect, planar photonics makes it possible to engineer far-field responses of ultrathin metal surfaces in unconventional ways.8, 9 Metasurfaces can potentially distinguish biomolecules with differing chirality (handedness).10, 11 Our next steps are to develop new types of nanolenses based on metasurfaces for the separation of even smaller targets (e.g., single biomolecules) and separation based on size and chirality.

Ahmet Ali Yanik is an assistant professor. His research focuses on nanoantennas and metamaterial devices for ultrasensitive IR spectroscopy of biomolecules and chemicals as well as high-throughput, cost-effective bioNEMS (bionanoelectromechanical systems) technologies for life sciences and point-of-care diagnostics. He has authored more than 80 journal papers and conference proceedings.

Xiangchao Zhu is a PhD student. His research focuses on nanophotonic biosensing of bacteria and viruses using nanofluidic devices.