Using organic electronics to reproduce the sense of touch

The human skin has millions of tactile receptors, which respond to mechanical and thermal stimuli and can discriminate between the position, size, and duration of these stimuli. It is the simultaneous combination of their responses and the way these responses are transferred by our nervous system to the brain that allows us to feel pain and to perceive whether something is hot or cold, soft or hard, smooth or rough, and so forth.

In the last decades, there has been a huge effort in developing novel technologies for reproducing the sense of touch1–3 for a wide range of applications, such as limb prosthetics and rehabilitation, and human-robot interaction. Ideally, artificial tactile systems should be multimodal, that is, they should be able to respond simultaneously to mechanical and thermal stimuli. However, it is very challenging to integrate different types of sensors into one device that can be distributed over large and complex areas, while keeping fabrication costs low.

In this respect, organic electronics—a new branch of electronics characterized by the use of conjugated polymers in the fabrication of electronic devices—represents a step forward. Conjugated polymers are organic macromolecules that can be dissolved into a solution and have the mechanical characteristics of plastics (that is, they are highly flexible and easy to transfer to any kind of surface). This means they can be deposited on large areas by using simple, cost-efficient technologies suitable for mass production, such as inkjet printing.

We have fabricated a multimodal tactile transducer on a flexible plastic substrate using a low-voltage, organic, charge-modulated field-effect transistor (OCMFET).4, 5 The architecture of the transducer is based on that of a floating-gate organic transistor (see Figure 1). The floating-gate electrode is partially covered with a combination of two ultrathin, hybrid dielectric layers6—in beige in Figure 1(a)—which allow the device to be operated at very low voltages. The organic semiconductor—in blue in Figure 1(a)—has been deposited over the source and drain electrodes—in yellow in Figure 1(a)—which are made of gold. There is another electrode, called the control gate, required for setting the working point of the device. The uncoated area of the floating gate is the sensing area, and it is the place where the transduction mechanism starts. 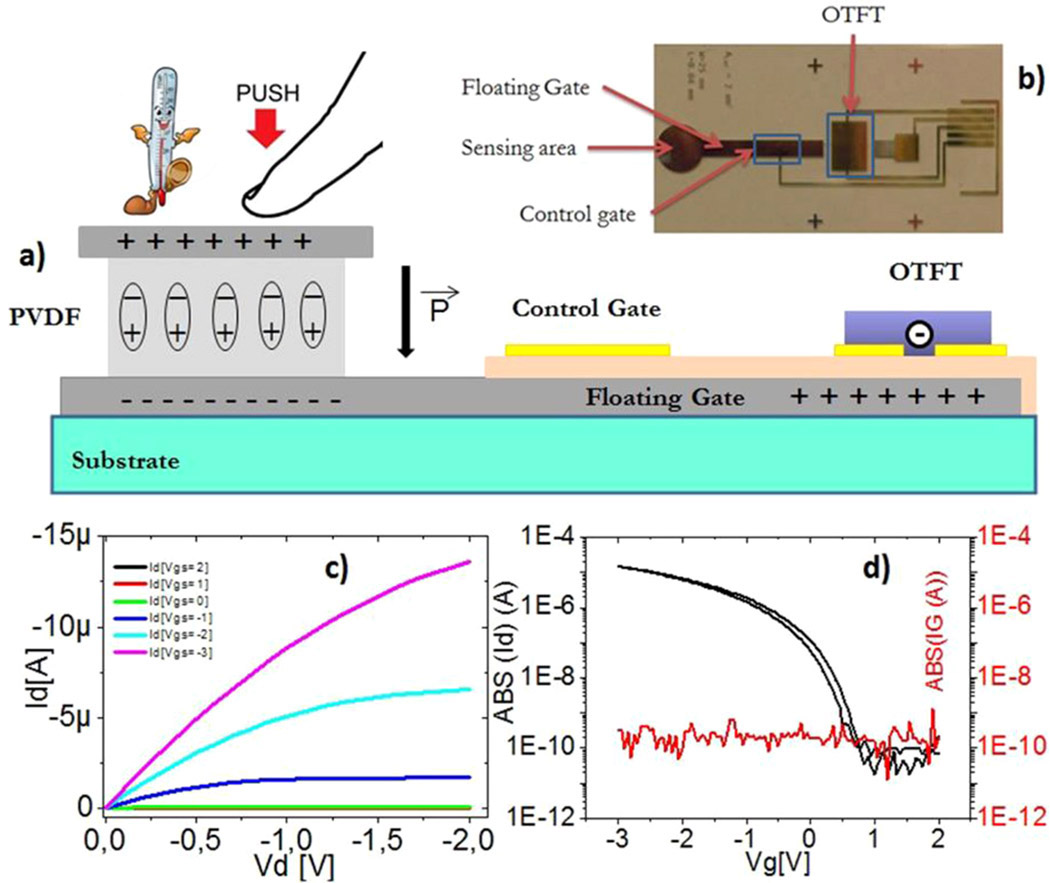 To determine the sensitivity of the device, we anchored a sensing layer—directly exposed to the measurement environment—to the sensing area. This sensing layer can be chosen according to the specific external stimulus. To achieve sensitivity to pressure, we deposited a piezoelectric thin film—polyvinylidene fluoride (PVDF)—on the sensing area of the device. When pressure is applied to the PVDF, the charges induced on the piezoelectric film lead to a perturbation in the charge that goes into the floating gate, thus modulating the concentration of carriers in the transistor channel. As a consequence, a current variation can be detected each time the film is pressed. The device can detect forces up to 2N with a resolution of 0.05N, and dynamic stimuli at frequencies of up to 100Hz (see Figure 2). 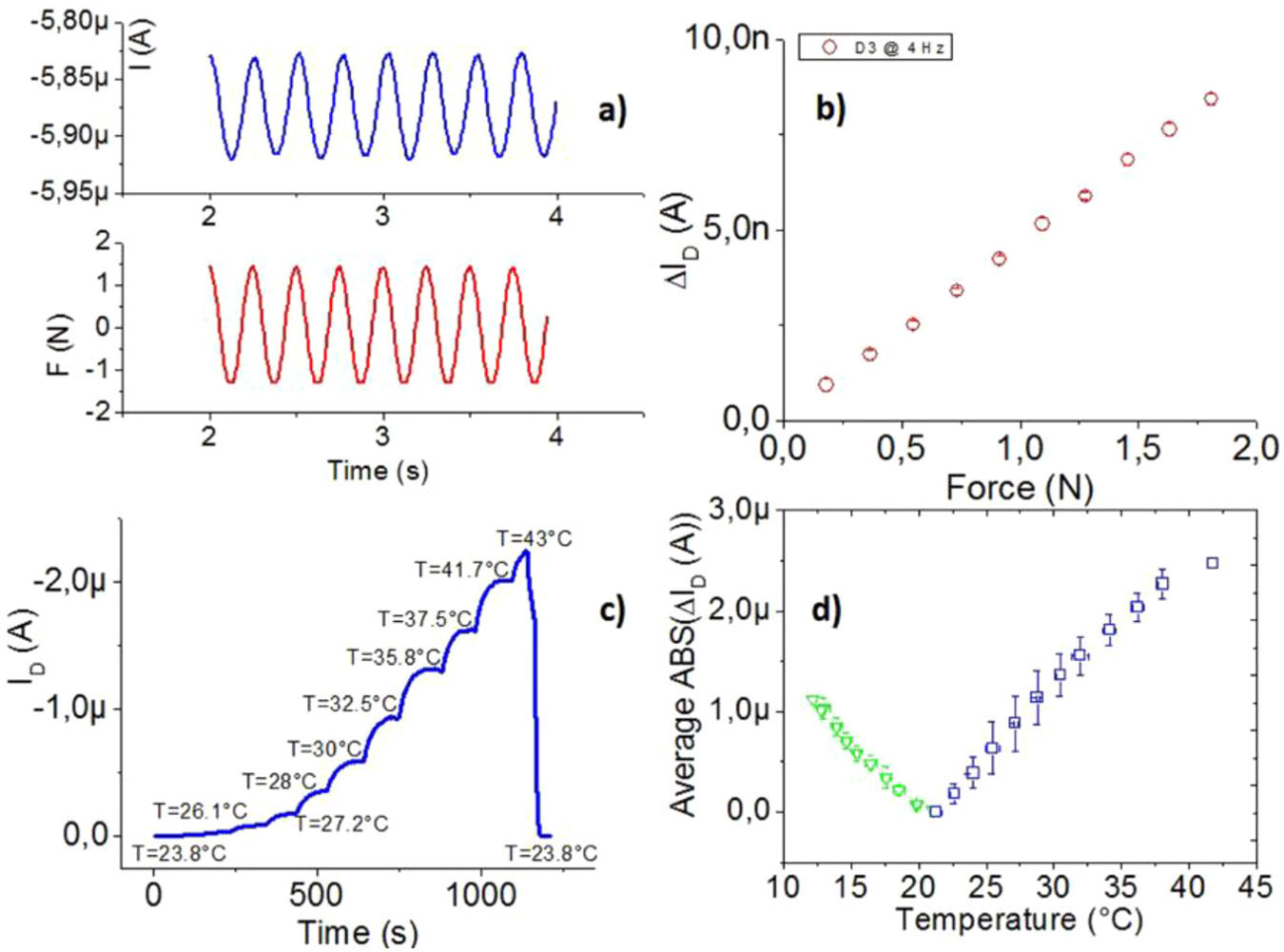 Interestingly, PVDF is a pyroelectric material, which means that our device can also detect temperature variations. The electrical characterization of the temperature sensors (see Figure 2) shows that they can detect variations in temperature ranging from 10 to 45°C. The device can be used to simultaneously monitor temperature and pressure because its responses to these two physical stimuli are characterized by marked differences in sensitivity and response time.

In summary, we have fabricated a novel multimodal sensing device that is suitable for highly flexible and conformable plastic substrates, and thus could find use in artificial skin systems. Our future goal is to develop matrices of multifunction sensors to extend the capabilities of the system. In particular, by depositing different specific materials on the sensing area, it should be possible to use the device to detect many other external stimuli, including some for which the human skin has no receptors, such as humidity and pH.

Piero Cosseddu graduated in electronic engineering in 2003 and obtained his PhD in electronic and computer science engineering from the University of Cagliari in 2007. Until September this year, he was a post-doctoral fellow at the Center S3 of the Italian Nanoscience Institute. He is currently an associate professor at the University of Cagliari.