Recording an average spectrum from 30 consecutive exposures of the τBoo star-exoplanet system enables a detailed study of this distant world, and potential characterization of other star-planet pairs.
11 August 2015
Francesco Borsa

The number of known exoplanets (those outside our Solar System) is rapidly increasing, thanks to photometric and spectroscopic surveys,1 and the scientific community is now focused on the planets' characterization. We observe exoplanets indirectly by detecting their influence on parent stars. Therefore, what we know about the planet depends on how well we know the star. The most favorable targets for this characterization are transiting exoplanets (where the planet's orbit is aligned with our line of sight, so that we see it passing in front of its star periodically). But we can develop new methods and observation strategies looking at non-transiting planets that are orbiting around bright stars. Here we describe work by the Global Architecture of Planetary Systems (GAPS),2 a collaboration of researchers using the high-precision HARPS-N3 spectrograph at the Telescopio Nazionale Galileo to study exoplanetary science. We observed the bright τ Boo system (a star hosting an exoplanet with a 3.3-day orbital period and its ∼1000-year period stellar companion) to test a new observational strategy4 that was aimed at characterizing multiple aspects of the system using a limited number of observations.

Our work had two key aims. The first was to look for the presence of an eventual star-planet interaction (SPI), a phenomenon previously studied but with ambiguous results.5 The second objective was to exploit the brightness of the star to make a tentative assessment of its asteroseismology (the study of the internal structure of pulsating stars through interpretation of their frequency spectra). To analyze SPI, we needed to achieve a high signal-to-noise ratio (S/N) near the calcium (Ca) II H&K spectral zone lines (centered at 3968.47 and 3933.66Å, respectively), whose depths are indicators of the star's chromospheric activity (that related to the star's middle atmospheric layer). Given the spectral energy distribution of τ Boo, matching this requirement for high S/N with a single HARPS-N exposure would cause saturation of the rest of the spectrum. To overcome this problem, we took 30 consecutive one-minute exposures and averaged these to obtain a single spectrum with a very high S/N, to be reduced by the instrument's software in a homogeneous way. In doing so, during the same observational period we obtained both the high-cadence spectra to monitor the solar-like oscillations (performing asteroseismology) and the mean high S/N spectra to study the Ca II H&K variations over the orbital period of the planet. Moreover, we also obtained very precise radial velocity (RV) values to study the long-term variability of the system. We repeated these observations on different, mostly consecutive nights.

To obtain averaged consecutive exposures, we developed new computational tools that could correct for the CCD readout time (since the reference time of each averaged image cannot be simply the average of the reference times of the high-cadence observations) and for the consequent change in the RV of the Earth with respect to the barycenter (center of mass) of the Sun-Earth system.

Using the high-cadence spectra, we could detect solar-like oscillations in the RV time series of τ Boo (see Figure 1). The observational values obtained, although very limited by the spectral window, agree well with both the asteroseismic model computed with the stellar parameters obtained from the HARPS-N spectra, and with the scaling relations. We could estimate the age of the system to be 0.9±0.5 gigayears, giving a stronger constraint with respect to the various (and discordant) values present in literature and based on different methods. Asteroseismology enabled us to determine more precisely the physical parameters of the star, thus further constraining the value of the mass of the planet τ Boo b  to 6.13±0.17MJupiter. 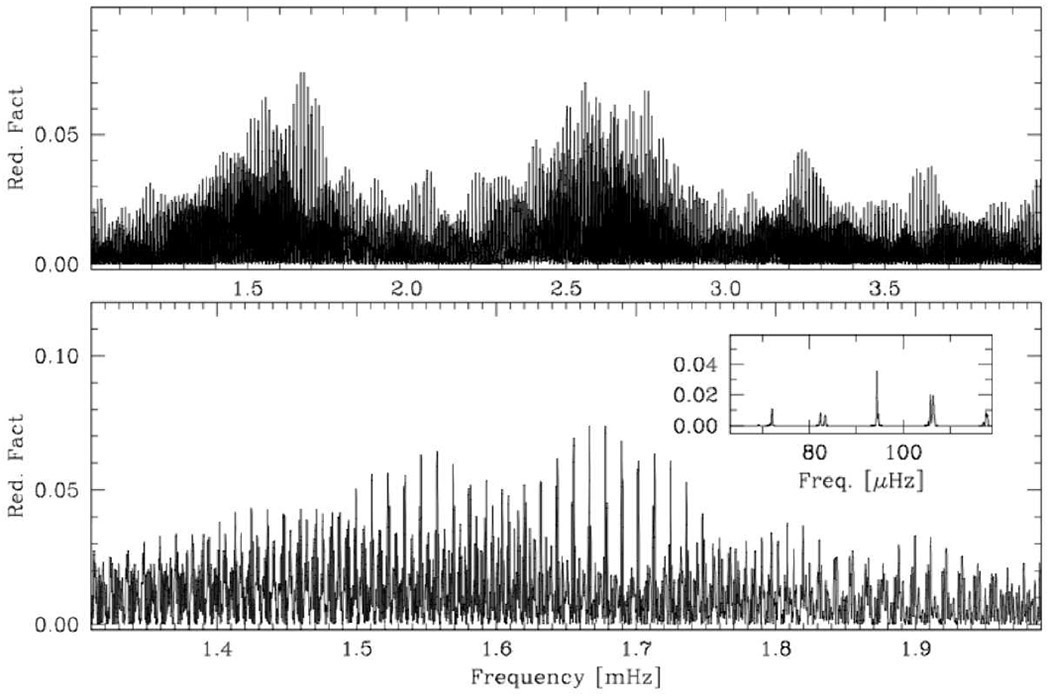 Using the very precise RV values of the averaged spectra, we could at first update the orbital parameters of the planet, and moreover, in conjunction with literature data, we found evidence that the star is rapidly accelerating due to the fast approach of its stellar companion τ Boo b to the periastron (the point closest to a star in the path of a body orbiting it). Analyzing the chromospheric activity of the star, we could detect very small variations that can possibly be phased with the orbital period of the planet (see Figure 2). However, since τ Boo's rotational period equals the planetary orbital period,6 we cannot say whether this is due to an SPI effect or to an active region of the star that is corotating with the planet. 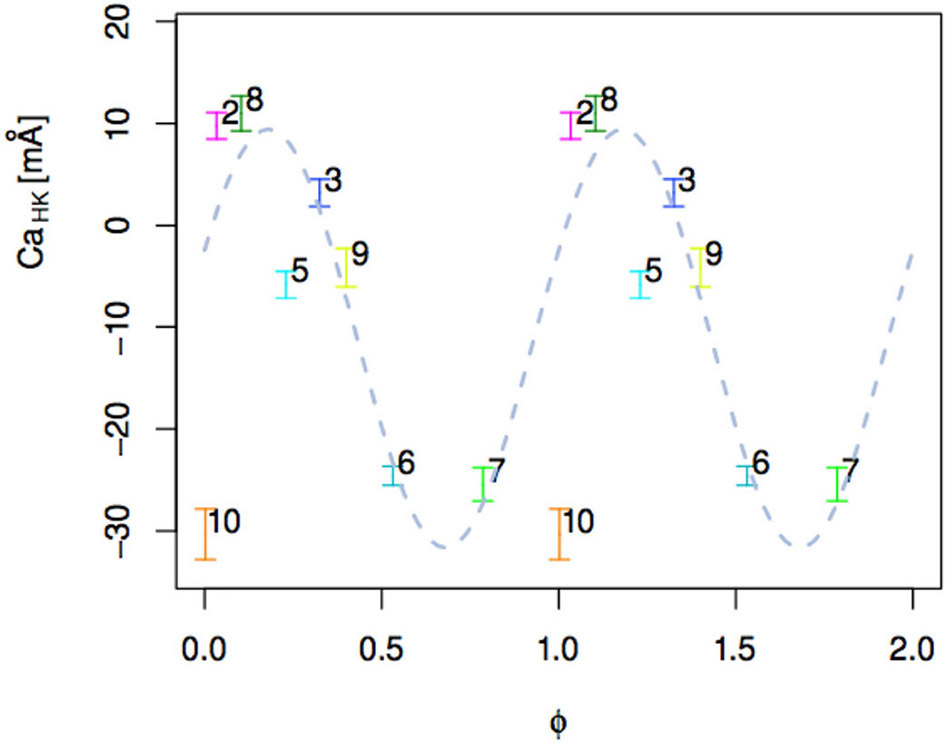 Figure 2. Diagram of the activity index calculated on the stellar calcium lines phase-folded with the orbital period of the planet.4 The planetary inferior conjunction is at φ=0. Numbers and colors refer to different nights of observations. The relative likelihood of the sinusoidal fit with respect to the flat model is >99.9%. Two outliers have been removed. mÅ: Milliangstroms.

These results, all obtained with a very limited observational effort (∼6 hours of effective exposures), support the application of this asteroseismic approach to other bright stars hosting exoplanets in order to constrain the values of their age and mass. Our future work will focus on using our techniques to bring more precision to estimates of the physical parameters of exoplanets, and a better understanding of the formation and evolution properties of planetary systems.

The author acknowledges all authors of Borsa et al. 20154 for the work described. The GAPS project acknowledges support from the National Institute for Astrophysics through the Progetti Premiali funding scheme of the Italian Ministry of Education, University, and Research.

Francesco Borsa is a postdoctoral researcher working on exoplanet detection and characterization using both spectroscopic and photometric methods. He is also involved in the development of technological instrumentation for the detection of exoplanets.