New technology can be used to produce single-frequency lasers with output power of more than 100mW and linewidths of less than 100kHz, at wavelengths of 780, 795, and 850nm.
07 August 2015
Laurence Watkins, Chuni Ghosh, Jean-Francois Seurin, Delai Zhou, Guoyang Xu, Bing Xu and Alexander Miglo

A vertical-cavity surface-emitting laser (VCSEL) is a specific type of semiconductor laser diode from which beam emission occurs from the top surface. Small aperture VCSELs—with output powers of a few milliwatts—are commonly used in atomic clock experiments and associated applications. In these situations, the VCSELs are operated in single longitudinal mode (single frequency) and can be tuned using current and temperature variations. Novel atomic clock-based sensors1–4 and other systems that are currently being developed, however, require higher power lasers. Such lasers must also be single-frequency, tunable, and have a narrow linewidth (i.e., less than 100kHz at the atomic clock wavelengths).

Higher-power edge-emitting diode lasers, however, typically cannot be stabilized for very narrow linewidths. For applications that require higher laser power, an amplifier is therefore required. But the use of amplifiers often produces beams with poor mode quality and poor coupling efficiency into fiber optic cables. It also commonly increases the complexity of the final system. At Princeton Optronics, we have previously developed higher-power VCSEL external cavity lasers and packaged them in small units.5 These lasers operate at a wavelength of 976nm and deliver more than 1W of power.

We are currently developing our high-power VCSEL technology to operate at the shorter wavelengths, which are relevant to atomic applications.6 With our new VCSELs we are able to generate laser outputs—at wavelengths of 780, 795, and 850nm—with more than 100mW of power in a single frequency. We use an external cavity three-mirror configuration to operate larger-aperture VCSELs and to produce more than 70mW in single-frequency mode.

We have developed a fully packaged version of our high-power VCSEL and have built prototypes to operate at a wavelength of 780nm. We mount the VCSEL in a fiber pigtailed package and mount the external mirror on a shear piezo. We are able to operate this VCSEL with a single frequency and with linear polarization. In addition, we can tune the laser by varying the piezo actuator, temperature, and current settings. By just using the piezo actuator alone, we have been able to achieve mode-hop free tuning over a frequency span of more than 30GHz.

We have also used the dichroic atomic vapor laser lock (DAVLL) method7,8 to develop a miniature locker—with a rubidium (Rb) cell—and install it inside our VCSEL package. In our prototypes, we have set up the locker so that it locks the VCSEL to the rubidium-85 (Rb85) line. Furthermore, we have set up the feedback controller to provide low-frequency feedback to the shear piezo and high-frequency feedback by modulating the VCSEL current. We have used the self-heterodyne method to measure the short window linewidths, which were less than 100kHz. The packaged VCSEL, including the miniature Rb cell locker, is shown in Figure 1. This prototype package has dimensions of 7.6×7.6×3.5cm. We have also made a provision in the design of this package to fiber couple the polarized single mode output into a polarization-maintaining optical fiber. The optical spectrum of our VCSEL is shown in Figure 2. This spectrum indicates that we were able to successfully achieve single-frequency operation and demonstrates that we obtained side mode suppression of 50dB. 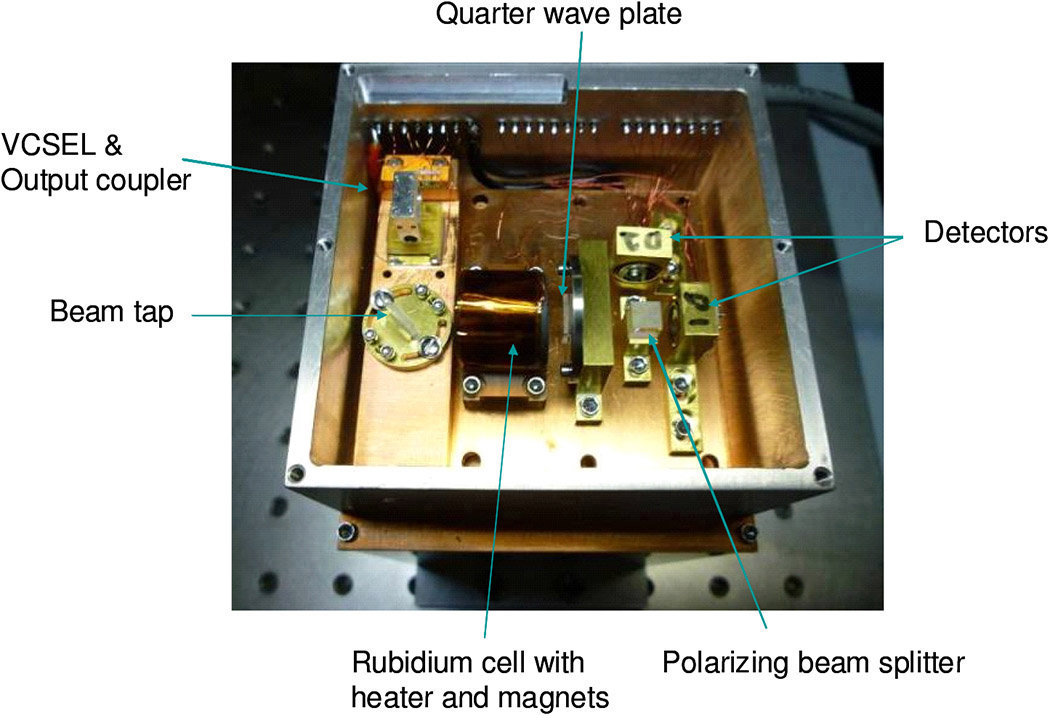 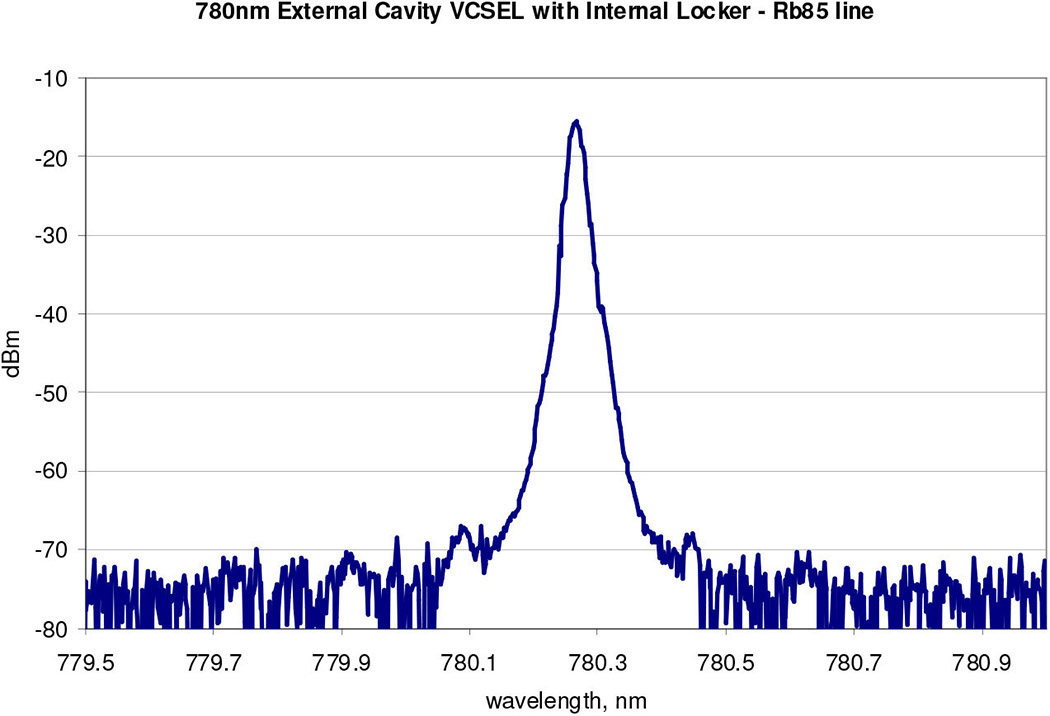 Figure 2. Optical spectrum of the VCSEL showing the rubidium-85 (Rb85) transmission line at a wavelength of about 780nm. In addition to the single-frequency operation, this spectrum shows that side mode suppression of more than 50dB was achieved. dBm: Decibel-milliwatts (measured power referenced to 1mW).

We designed our feedback controller so that it applies a bias to tune the VCSEL within the capture range of the DAVLL locker and across the Rb85 transition line. We conducted a saturable absorption experiment to measure the spectral properties of the VCSEL output. In this experiment, we slowly tuned the stabilized VCSEL across the Rb85 transition. The transmission measurement from the saturable absorption probe detector (see Figure 3) shows six lines in the hyperfine structure. We measured the VCSEL linewidth by tuning the laser to the side of the largest transmission peak. During this process, the probe detector measured fluctuations in the transmitted intensity. These are caused by frequency fluctuations when the laser is tuned to the edge of the line. We determined the slope of the transmission peak from the scan shown in Figure 3 and used it to compute the frequency of the fluctuations. We then analyzed these perturbations to calculate the linewidth of our packaged VCSEL. When we used only the low-frequency feedback to the shear piezo, the linewidth was reduced to less than 1MHz. By adding the high-frequency feedback to the current, we were able to reduce the linewidth even further to less than 100kHz. These linewidth measurements are for time windows of more than 1ms. The long-term stability of our frequency tuning was less than 1MHz during measurement periods of several minutes. 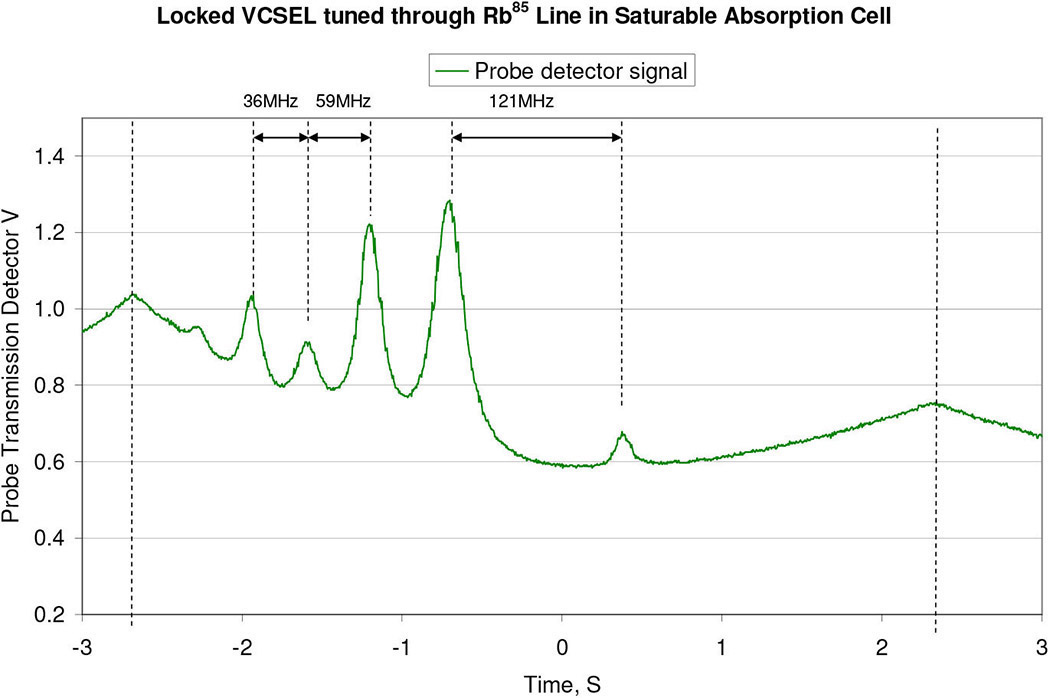 Figure 3. Transmission from a probe detector during a saturable absorption cell experiment. Six lines can clearly be seen within the hyperfine structure of the Rb85transition.

We have developed new VCSEL technology that can be used to produce high-power (more than 100mW) single-frequency outputs with narrow linewidths (less than 100kHz). We have built fully packaged prototypes of our technology and have conducted experiments to verify the capabilities of our devices. With the use of variable piezo actuator, temperature, and current settings, we are are able to tune our VCSELs. In addition, we use a DAVLL method to lock the device to a specific wavelength (the Rb85 transmission line). In our future work, we plan to reduce the size of our prototype even further. In addition, we are developing new VCSEL technology to produce higher-power external cavity designs. With these devices, we will achieve about 500mW of power. We also aim to develop these VCSELs for the other atomic clock wavelengths.

Financial support for this research from the Aircraft Division of the Naval Air Warfare Center is gratefully acknowledged.

Chuni Ghosh is the founder and chief executive officer of Princeton Optronics, who are developers of high-power VCSELs and VCSEL-pumped solid-state lasers. Prior to holding this position, he was the director of Sarnoff Labs, where he worked on semiconductor edge-emitting lasers, silicon CCD and CMOS imagers, as well as gallium arsenide integrated circuits.