Artificial spin ice: from scientific toy to material by design

Interesting magnetic materials are rare and found serendipitously in nature. Their functional unit, the magnetic domain, is most often a localized, dipolar degree of freedom, leaving limited room for creativity and functionality. However, recent advances in nanofabrication and lithography allow design to replace serendipity in bottom-up manufacturing of a new class of artificial, magnetic metamaterials called artificial spin ices (ASIs).1, 2 Introduced initially to mimic the exotic frustrated states of rare earth titanates (‘spin ice materials’) in a controllable environment, ASIs can now be designed to manifest desired emergent properties. The design characteristics are controllable, delocalized monopolar magnetic degrees of freedom3–5 at the desired temperature and field range.5–9

ASIs are arrays of interacting magnetic nano-islands of ferroics, iron-nickel alloys, typically permalloy, or iron-palladium composites (see Figure 1). The magnetic moment of each elongated nano-island, 102nm across, behaves as a macrospin oriented along its principal axis, thus providing a binary degree of freedom. These islands interact to generate collective behaviors that depend on their geometrical arrangement, making it possible to design exotic states in their low-energy physics. Furthermore their mesoscopic degree of freedom—the island magnetization—can be characterized in real space via magnetic force microscopy (MFM), Lorentz microscopy, or photoemission electron microscopy (PEEM), for unprecedented validation. Depending on nano-island size and composition, at room temperature these materials can be either static or thermally active, while their super-paramagnetic threshold can be engineered.8 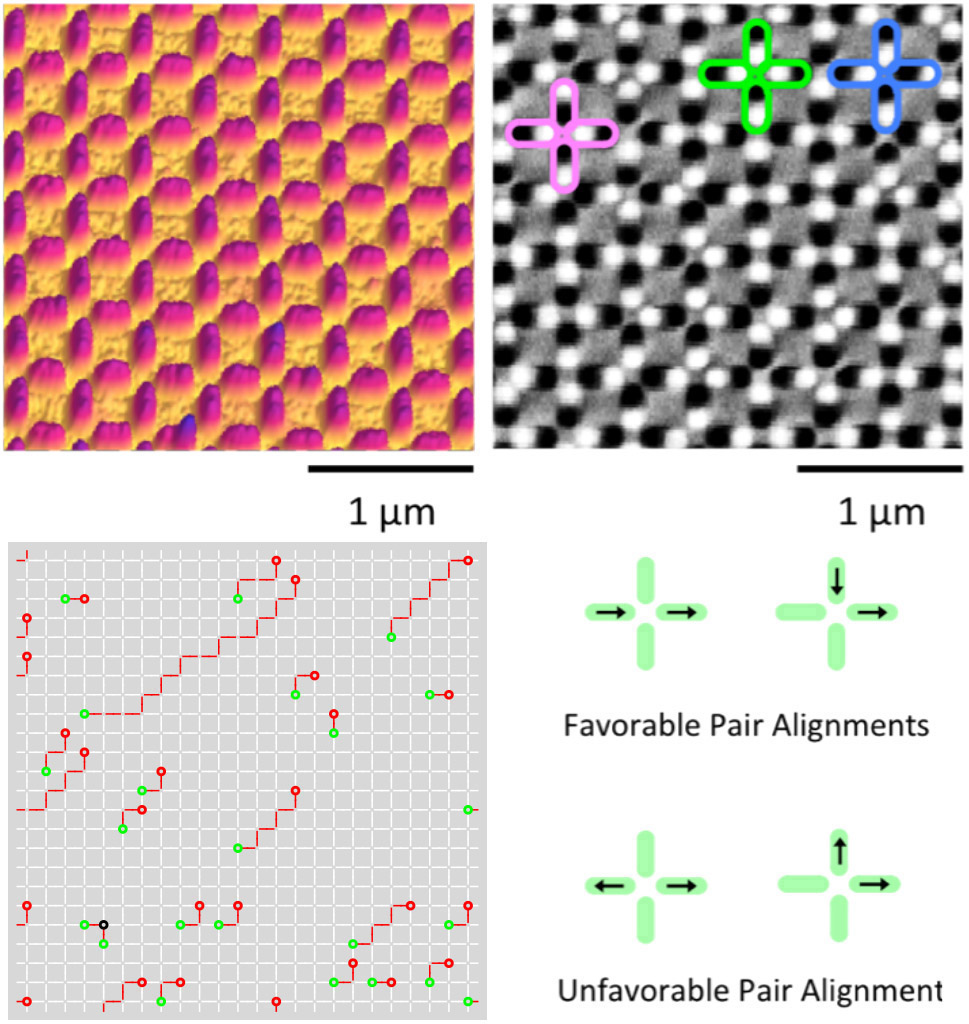 Static realizations have been used in probe-response studies under an applied magnetic field, for instance to elucidate the mechanism of field inversion in a complex magnetic system at a constituent level. Consider as an example the square geometry in Figure 1. Starting from a fully polarized magnetic state in the diagonal direction, all vertices obey the so-called ice rule (two spins point in, two point out). Then field inversion (and weak disorder) nucleates pairs of 3-in/1-out, 1-in/3-out vertices, which are topological defects endowed with magnetic charge. These pairs separate under field, leaving tracks of opposite magnetization, often called Dirac strings.3 The mechanism can be exploited for return point memory effects, as cycled field inversion simply elongates and shortens such strings. If, however, the applied field is close to the coercive field (that is, the field needed to invert the magnetic moment of the nano-island), enough monopoles are nucleated that their tracks merge in a complex network. At every field inversion, this alters their paths toward annihilation in reversal mechanism, converging to the return point only after proper cycling. This exemplifies complex, field-driven dynamics of topologically stable objects, which can only annihilate in pairs of opposite topological charge and can be thought of as mobile, binary information carriers, possibly for future spintronic applications.

Thermally active realizations, on the other hand, allow the statistical mechanics of complex classical spin systems to be engineered beyond the celebrated models studied in the past.10 Also, kinetics and fluctuations can be observed in real time and real space.9 For example, in a hexagonal realization, as temperature is reduced, the material crosses over from a paramagnetic state to a quasi-disordered ice manifold, where half of the vertices are in a 2-in/1-out and the other half in a 2-out/1-in configuration. Because of the odd coordination of the lattice, these vertices are magnetically charged, with two plasmas of opposite charges for overall neutrality. The lattice being bipartite, a further reduction in temperature leads to a charge ordering transition into an ionic crystal of magnetic charges.11 We have experimentally verified this incipient charge ordering (see Figure 2).5 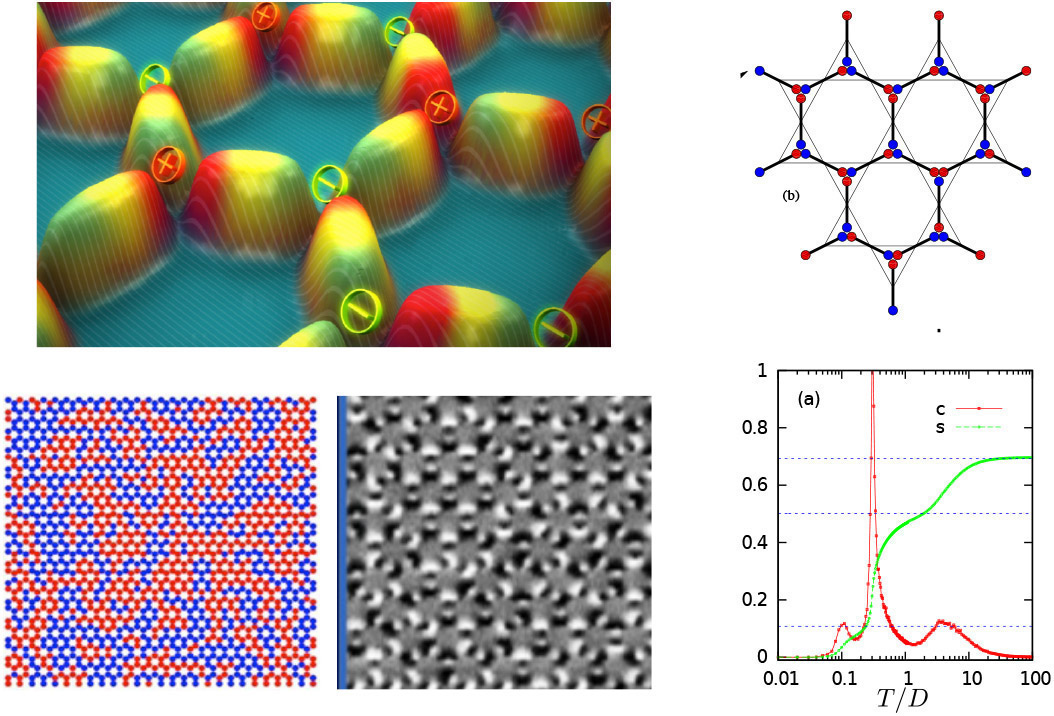 Figure 2. Magnetic charge ordering in hexagonal spin ice. When the nano-islands are arranged in an honeycomb pattern, there is no charge cancellation at the vertices (top left); simulations of entropy S and specific heat C as a function of normalized temperature T/D (bottom right) predict a transition to ionic crystallization (top right) of the magnetic charges of the vertices; and experiments reveal incipient crystallites of ordered magnetic charges (bottom middle and bottom left).5,11

A main ingredient of ASI is geometric frustration, which generates its quasi-disordered ice manifold. In the earlier geometries described above, frustration came from the impossibility of optimizing all the interactions among nearest-neighbor nano-islands. This pairwise frustration carries a limit: the anisotropic nature of the dipolar interaction weds the frustrated element—the interaction—to the geometry. We recently proposed12, 13 and realized14 geometries whose element of frustration is no longer the pairwise interaction, but instead the entire vertex: these clusters of nano-islands can be arranged in a way such that not all vertices can be allocated to their lowest energy state. As the vertex energetics—unlike the pairwise dipolar interaction—is independent of the vertex position in the geometry, it allows for wider freedom in designing frustration. The frustration, being emergent in nature, carries with it other emergent properties.

An example is the Shakti lattice shown in Figure 3, where not all the vertices can be set in their lowest energy state.14 Thus, each plaquette must contain two ‘unhappy vertices’ as topologically protected local excitations. An emergent six-vertex model,10 predicted to have critical correlations, dictates the allocation of such topologically protected local excitations. Furthermore, three-legged vertices in the lattice are always endowed with magnetic charge, resulting in a magnetic plasma that screens monopolar excitations.

Figure 3. AFM (left) and MFM (center) images of the vertex-frustrated Shakti lattice: not all vertices can be accommodated in their lowest energy configuration, and the allocation of excited vertices is controlled by an emergent six-vertex model (right).14

In conclusion, we have designed, fabricated and tested novel magnetic metamaterials at the nanoscale. These can mimic exotic low-temperature frustrated features of natural materials, but at a desired temperature and magnetic field scales. They can also provide the first realization for celebrated models of condensed matter physics. More importantly, we have demonstrated that this approach can be extended to the introduction of novel magnets with properties not found in natural materials. In the future we will push these ideas to test new topologies, concentrating more on their kinetic properties in and out of equilibrium.

The author is grateful to P. Schiffer and his group at the University of Illinois at Urbana-Champaign (in particular I. Gilbert, S. Zhang, and Y. Lao) and to V. Crespi and P. Lammert at Penn State University, for long, fruitful, and continuing collaboration, as well as G.-W. Chern at Los Alamos National Laboratory.