A lab-on-chip (LoC) combines laboratory functions such as sample injection, mixing, and online detection all on a single device. Potentially, the technology enables analyses outside the laboratory, offering the possibility of real-time and on-site testing for biochemical and biomedical analysis. Applications would include point-of-care diagnosis, environmental monitoring, forensics, food quality control, and industrial analysis. However, despite considerable progress in recent years, the applications of LoCs are still limited to laboratory prototypes without widespread routine use in clinical or high-throughput applications. This is because bulky and expensive microscopes (external to the LoC) are necessary to achieve optical detection. To address this issue, we propose miniaturizing and integrating these optical functions on the chip and applying state-of-the-art polymer replication technologies. This would enable mass production of polymer LoCs at low cost for deployment on a far wider scale. Smart design of optofluidic LoCs offers the sensitivity of laboratory-scale optical detection instruments with portability, fast response times, low sample consumption, and parallel processing and read-out.

Until recently, LoCs were prototyped mainly in quartz, glass, or silicon. However, micromachining of quartz and glass is difficult and expensive, and silicon lacks optical transparency at interesting spectral bands. Most applications require the use of disposable devices to eliminate the risk of sample contamination or the burden of time-consuming rinsing, therefore polymers are gaining a leading role as substrate material for microfluidic devices. The elastomer poly(dimethylsiloxane) (PDMS) is today by far the most popular polymer for LoCs thanks to its easy processing through casting and soft lithography. However, there are several drawbacks of PDMS LoCs,1 such as deformation due to low stiffness, evaporation due to high gas permeability, and absorption of hydrophobic molecules from the culture media. In addition, high-volume manufacturing is not possible with PDMS.1 We can overcome these shortcomings using other polymers, thanks to recent advances in high-aspect ratio polymer-based microfabrication techniques supported by replication technologies, offering realistic opportunities for mass production.2, 3 Indeed, these polymers offer a broad range of interesting material and surface chemical properties, such as good optical transparency, biocompatibility, biodegradability, and mechanical stability, which enable microscopic design features that cannot be realized by any other class of material. In our work, we make use of ultra precision diamond tooling (UDT) for fabrication of micro-optical, micromechanical, and microfluidic 2.5D and 3D components or a hybrid combination thereof, containing freeform surfaces with optical quality.4 Besides prototyping in polymers, UDT enables fabrication of a metal mold as a shim in a subsequent replication process, such as microinjection molding or hot embossing. We use the latter, since it is the preferred technology for high-precision and high-quality replication of 2.5D microcomponents.5 The most important advantage of hot embossing is that, thanks to a low material flow, it avoids internal stresses. Although hot embossing typically has longer cycle times than microinjection molding, our equipment is compatible with 300mm wafer-scale replication (see Figure 1), enabling low-cost production. For leakage-free sealing of the microfluidic channels, we use a clear-to-clear laser welding technique. 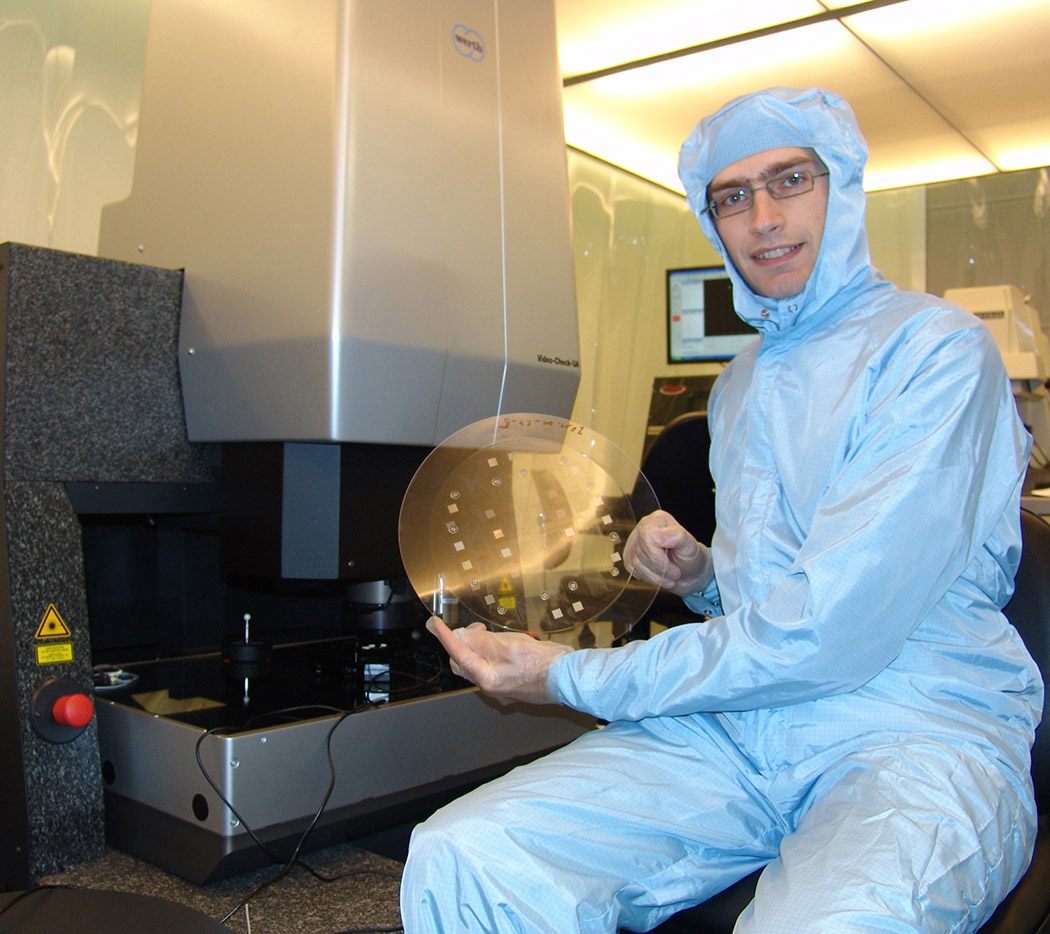 Optical techniques are the established frontrunners in chemical detection, as they have an excellent record in analysis.6 They usually show the highest sensitivity and provide the greatest chemical or morphological information on the species being analyzed.4 Optofluidic LoCs commonly perform detection through optical absorption because this approach is simplest, but the short optical path lengths inherent in miniaturized fluidic channels lead to weak optical absorption competing with a high transmission of excitation light. As a consequence, it is difficult to achieve low detection limits. Fluorescence-based optical detection can solve this issue. When certain molecules absorb light at a particular excitation wavelength, they emit light at a longer wavelength after a brief interval known as the fluorescence lifetime (typically in the order of a nanosecond). Although fluorescence detection has the extra requirement of labeling with fluorophores, this technique is so sensitive and has achieved such wide acceptance that it is by far the most commonly used. We recently demonstrated a miniaturized polymer-based micro-optical detection unit for UV and visible laser-induced fluorescence (LIF) and absorbance (ABS) analysis, with an interaction length of 3mm.7 Our LoC design features a compact optical system combining total internal reflection mirrors and refractive optics (see Figure 2). The experimentally measured limits of detection were 50pM and 500nM for LIF and ABS, respectively.7 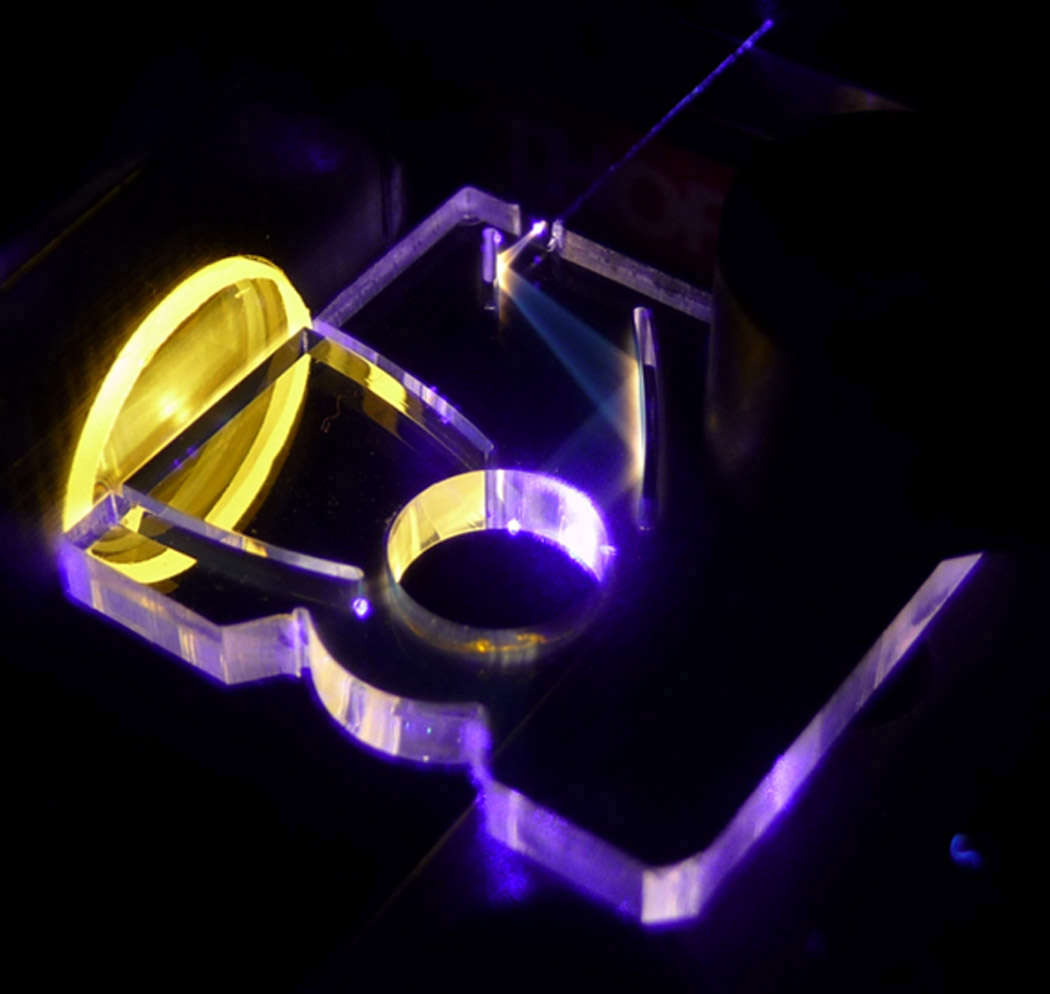 Meanwhile, for label-free detection and identification of species, Raman spectroscopy has been gaining ground.8 This method relies on inelastic (Raman) scattering of monochromatic light, which interacts with molecular vibrations, phonons, or other excitations in the system, resulting in the energy of the laser photons being shifted down (Stokes) or up (anti-Stokes). The scattered signals are very weak, so to address this we used an LoC with on-chip confocal Raman spectroscopy that made use of an integrated freeform optical reflector9 (see Figure 3). We prototyped the reflector using UDT in poly(methylmethacrylate) (PMMA), which we coated by chemical vapor deposition with a 200nm-thick layer of gold. The multimode collection fiber acts as a pinhole, which enables on-chip confocal Raman spectroscopy, suppressing the background Raman signal (originating from the PMMA) with a factor 7: see Figure 4(a) and 4(b). Figure 4(c) shows the result of measuring urea solutions with different concentrations, using an internal standard (potassium nitrate) for calibration. We obtained a noise-equivalent concentration of 20mM for the detection of urea, with an acquisition time of 15s and a power of 190mW. 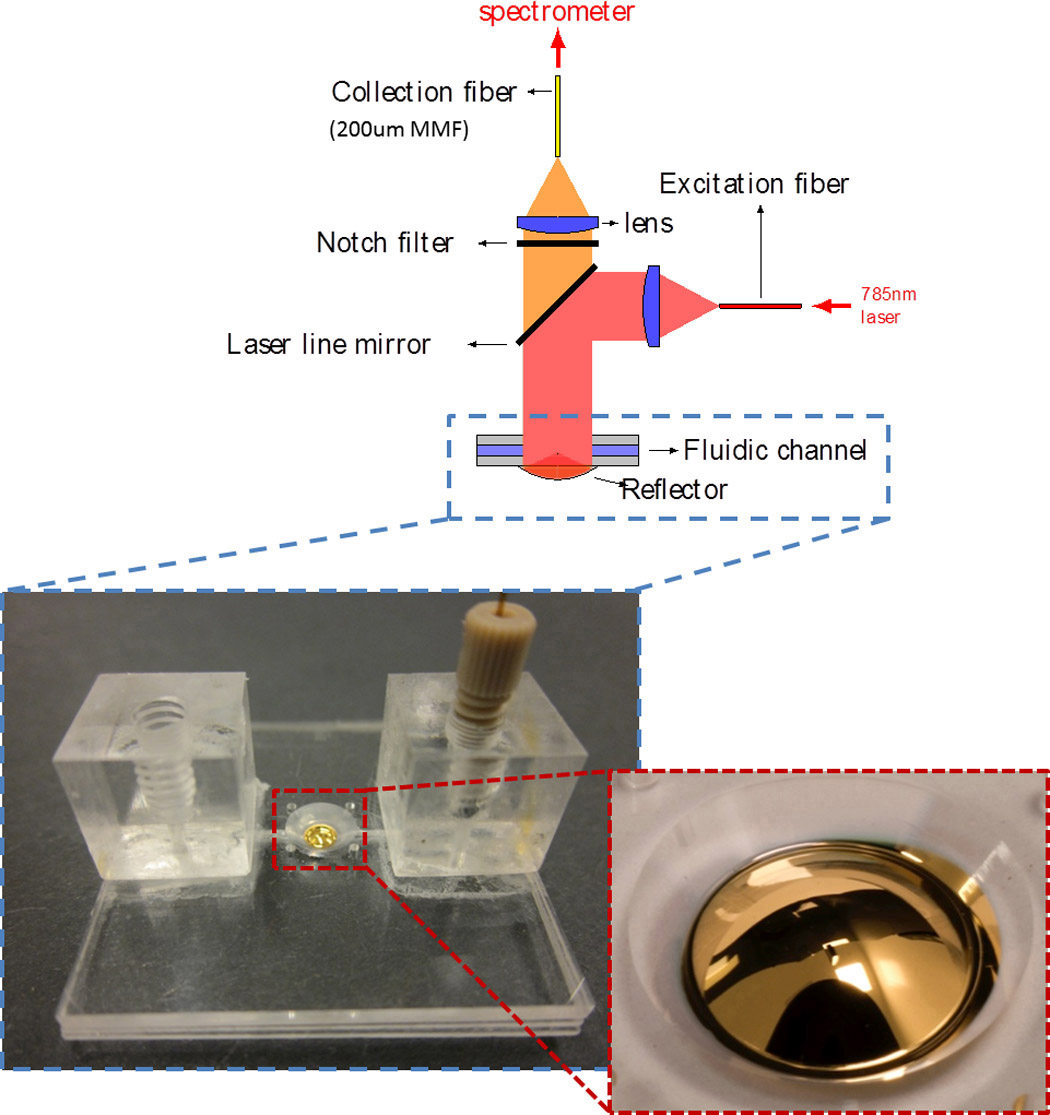 In summary, by using UDT with a variety of polymers, we have fabricated optofluidic LoCs for compact, low-cost detection systems. Using these technologies, we are now building proof-of-concept demonstrators for a variety of applications, such as food sorting, controlling the quality of honey, authentication of olive oils, and verifying the safety of drinking water.10

Jürgen Van Erps is a professor of photonics, developing micro-optical components for optical interconnect and optofluidics applications. He obtained his MSc in electrotechnical engineering with majors in photonics in 2003, and his PhD in 2008. He is a Senior Member of SPIE.

Heidi Ottevaere is a full professor in photonics developing optofluidic labs-on-chips. She obtained her MSc in electrotechnical engineering with majors in photonics in 1997 and her PhD in 2003. She is a member of SPIE.

Diane De Coster is working towards a PhD in optofluidic labs-on-chips and obtained her MSc in electronic engineering with a minor in photonics in 2010. She is a student member of SPIE.

Tom Verschooten is working towards a PhD in optofluidic labs-on-chips and obtained his MSc in photonics in 2011. He is a student member of SPIE.

Michael Vervaeke is a professor in photonics developing freeform (micro-)optical components for various applications. He obtained his MSc in electrotechnical engineering with majors in photonics in 2000 and his PhD in 2007. He is a member of SPIE.

Hugo Thienpont is a full professor, vice director of innovation and valorization, and managing director of the Brussels Photonics Team. He graduated as an electrotechnical engineer with majors in applied physics in 1984, and received his PhD in applied sciences in 1990, both at the Vrije Universiteit Brussel.