A novel experimental approach is used to measure spectral correlations between photoexcitations and thus investigate the generation of photocarriers in excitonic solar cells.

Modern polymer-based solar cells can now display power conversion efficiencies of more than of 10%. The scientific community involved in the development of these technologies, however, has not yet reached a consensus regarding the mechanism of photocarrier generation on sub-picosecond timescales.1 Although ultrafast spectroscopic measurements reveal that charges are generated efficiently on such timescales over long distances,2 it is unclear how these charges are produced. They may arise directly following optical absorption, or instead be produced in a stepwise fashion. To answer this question, a nonlinear optical probe is required. With such a probe it would be possible to unravel correlations between the distinct states that are involved in photocurrent photogeneration.

A useful strategy for measuring spectral correlations between different states is 2D coherent electronic spectroscopy.3 It would be ideal, however, if there were a way to measure a 2D excitation spectrum via photocurrent detection because this would involve detection of the final population of interest (i.e., the photocarriers that do the work). With 2D coherent spectroscopy, the nonlinear response of a given system—which has been excited by a sequence of phased ultrafast laser pulses—is recorded in multidimensional frequency or time space. In the 2D spectral maps that are produced, coupled resonances appear as off-diagonal peaks.3 This property allows energy and charge transfer phenomena—which eventually lead to photocurrent generation—to be investigated in solar cells that are based on novel materials. By measuring the nonlinear signal, with the appropriate phase relationship, during 2D coherent spectroscopy it is possible to determine the superposition of states induced by the interaction of exciting fields at separate points in time. 2D coherent spectroscopy is therefore a popular technique because it directly exposes the existence of couplings between distinct excited states. Precursors to photocarriers (e.g., excitons in molecular semiconductors) can be probed by examining their excitation spectral line shapes.

We have developed an implementation of nonlinear photocurrent excitation spectroscopy to explore the spectral correlations in the photocurrent excitation spectrum of a working solar cell (similar setups have previously been described).4, 5 With our technique—known as 2D photocurrent excitation spectroscopy (2D-PCS)—we can identify and resolve spectral correlations in a 2D spectrum with femtosecond resolution. We have used our experimental technique to investigate the charge photogeneration mechanism in organic photovoltaic devices (OPVs) that are based on a so-called bulk heterojunction. A bulk heterojunction is a blend of electron donor (e.g., π-conjugated polymer) and electron acceptor (e.g., fullerene derivative) materials. To address this problem, we examined the off-diagonal couplings between the exciton states that are localized on the polymer chain, as well as the delocalized π-electron states of the acceptor material.2, 6

Our experimental apparatus—see Figure 1(b)—is based on the generation of four collinear femtosecond pulses and their acousto-optic phase modulation. We operate a regenerative amplifier at a repetition rate of 600kHz and create an output pulse train with an initial wavelength of 1030nm and a pulse duration of about 200fs. This pulse train pumps a noncollinear optical parametric amplifier (NOPA), which delivers large bandwidth pulses (about 100nm) centered at about 600nm. We then use an adaptive pulse shaper to compress the bandwidth pulses so that they are about 10fs long at the sample position. The pulse train is then split and feeds twin Mach-Zehnder interferometers that are nested in a larger Mach-Zehnder interferometer. We use three computer-controlled delay states to provide independent control of the three interpulse times (t21, t43, and t32) that are illustrated in Figure 1(a). Each of the twin Mach-Zehnder interferometers produces two phase-locked pulses. We achieve the phase-locking condition by placing an acousto-optic Bragg cell in each arm of the interferometers. The Bragg cells impart a frequency shift on each pulse, which is equal to its modulating frequency—Ωi (where i = 1, 2, 3, and 4)—of about 200MHz. The interfering excitation pulses eventually produce a population signal that oscillates at Ω21 (i.e., Ω2–Ω1) and Ω43 (i.e., Ω4–Ω3). We choose values of Ωi so that Ω21 and Ω43 are on the order of 10kHz. 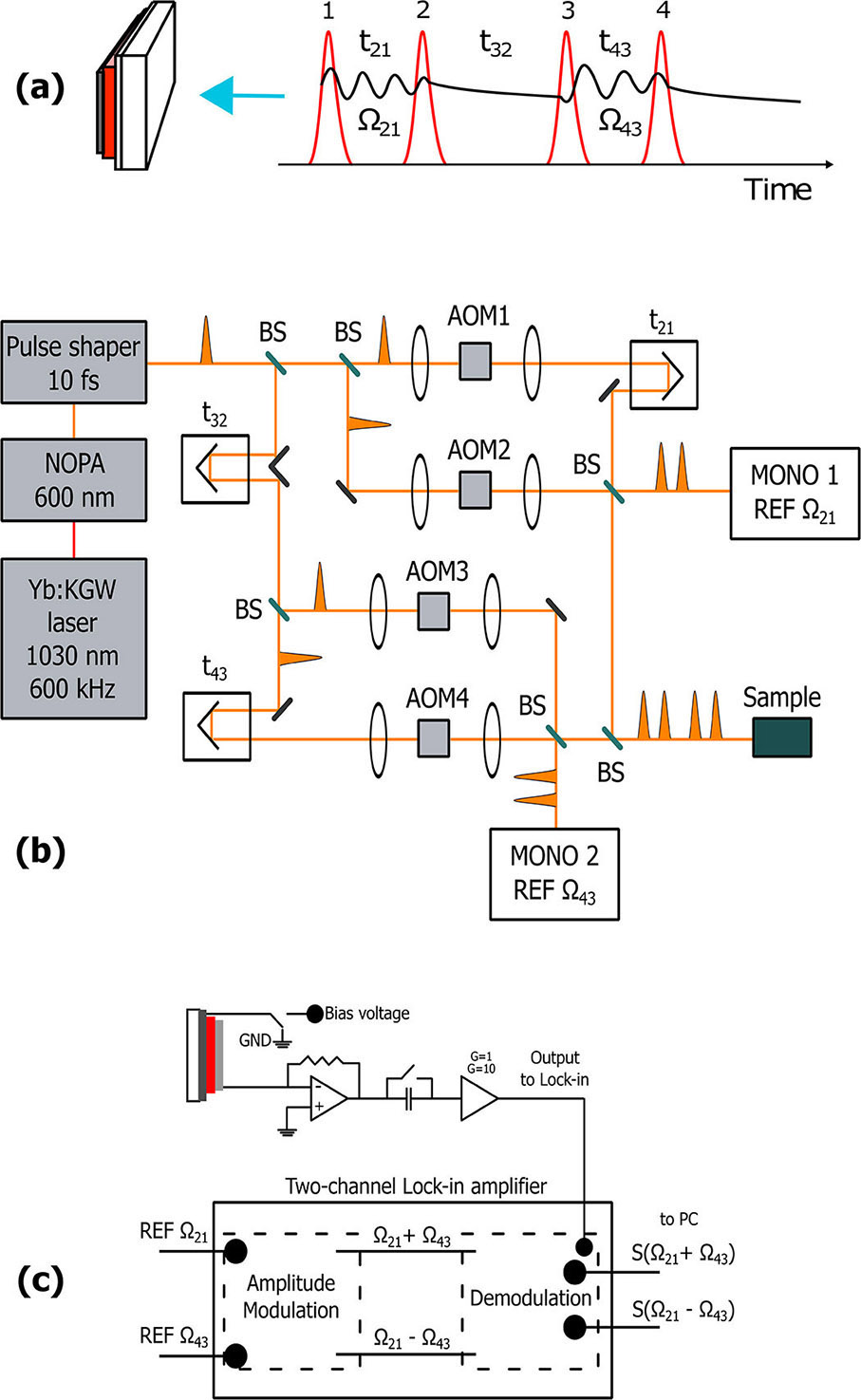 We repeat this experimental procedure for each laser shot. We phase-shift the sequence of pulses, with respect to the previous shot, and thus create two collinear trains of phase-modulated pulse pairs. Within this phase cycling scheme, the nonlinear signals of interest (normally referred to as ‘rephasing’ and ‘non-rephasing’ signals) oscillate at frequencies of Ω43–Ω21 and Ω43+Ω21, respectively.4, 5,7 We are able to extract these frequencies from the overall signal with the use of lock-in detection methods. We obtain the reference signals for the lock-in demodulation from the optical replicas of the exciting pulses—see Figure 1(b)—that are generated at the exit beam splitters of the twin Mach-Zehnder interferometers. When scanning t21, the phase of these reference signals does not evolve at an optical frequency, but rather at a reduced frequency (equal to the difference in the frequency of the signal and that set by the monochromators). This frequency downshift provides an improved signal-to-noise ratio, which virtually removes the effects of phase instability due to mechanical fluctuations from the signals of interest.

We build 2D maps from the demodulated signals that we acquire at fixed t32 and scanning t21 and t43, which typically extend to a few hundred femtoseconds. With the use of a two-channel lock-amplifier, we can simultaneously produce four maps (i.e., the in-phase and in-quadrature maps for the rephasing and non-rephasing frequencies) with these scans. In the final step of our technique, the maps that we obtain in the time domain are converted to the energy domain. To do this, the time variables (t21 and t43) undergo a Fourier transform and are thus recorded as a function of the time t32. Real (absorptive) and imaginary (dispersive) spectra that we obtained using our 2D-PCS technique on a polymer-fullerene blend photocell are shown in Figure 2. We achieve remarkably high-quality spectra (i.e., with low signal-to-noise ratios), which shows that our experimental technique can be used for the investigation of photocarrier generation in OPVs. The unique capabilities of our method are due to our ability to probe the photocurrent directly. It is therefore possible to better understand the mechanism of primary charge generation in the operating regime of organic solar cells. 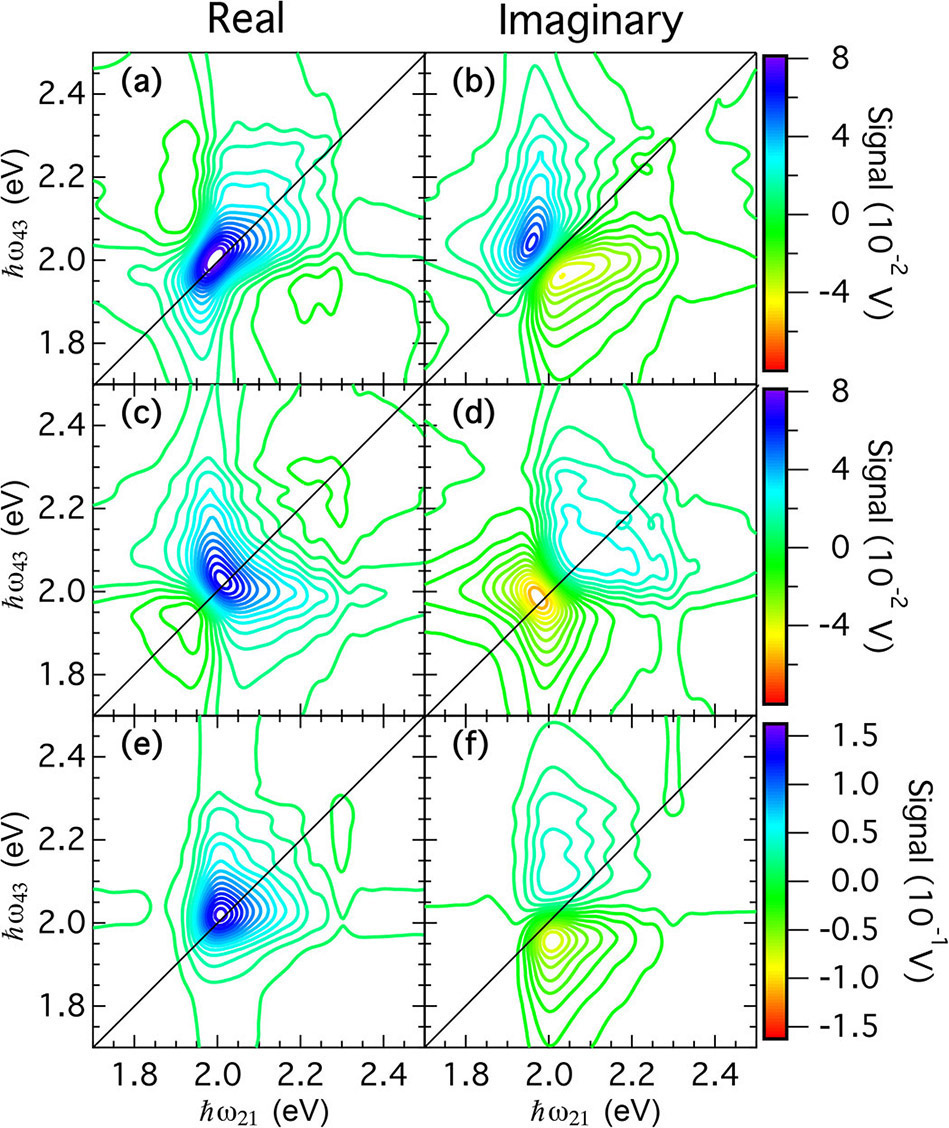 We have developed a novel nonlinear photocurrent excitation spectroscopy approach (2D-PCS) with which we can resolve 2D spectral correlations on femtosecond timescales. With our experimental technique we are able to directly probe photogeneration mechanisms in organic photovoltaic devices. We are currently exploiting this technique to explore how excitons that are produced in polymer chains couple to dark states to produce a photocurrent. This process cannot be probed directly using linear spectroscopies such as simple photocurrent excitation spectroscopy. This work will allow us to understand ultrafast photocarrier generation processes in polymer-based solar cells with unprecedented detail.

We acknowledge the generous help of Andy Marcus and Julia Widom in the construction of our experimental apparatus. Carlos Silva acknowledges support from the Natural Sciences and Engineering Research Council of Canada, the Fonds de recherche du Québec—Nature et technologies (FRQNT), the Canada Research Chair in Organic Semiconductor Materials, and the University Research Chair. We are also grateful for the contribution of our collaborators Jenny Nelson, Eric Bittner, Sachetan Tuladhar, Michelle Vezie, Sheridan Few, and Hao Li.

Carlos Silva is a professor of physics and holds the University Research Chair in Organic Semiconductor Materials. His research group are experts in linear and nonlinear ultrafast optical probes of excitonic processes in organic semiconductor materials.