The use of blue-phase liquid crystals in bandpass filters based on photonic integrated circuits enables the birefringence to be modulated via optical tuning.
04 September 2015
Joanna Ptasinski, Iam-Choon Khoo and Yeshaiahu Fainman

LCs are known to exhibit extraordinary electro-optical sensitivity and broadband birefringence. The reorientation of an LC and therefore the change in birefringence needed for tuning and switching purposes, for example, in bandpass filters, usually employs an AC electric field.12, 13 However, we have found that the orientation of nematic LCs can also be changed by phototuning owing to their extraordinarily large optical nonlinearity.12, 14 This has the advantage of being a non-contact, electrode-free process that permits flexibility in the direction of the applied optical electric field. In the presence of small amounts (∼1%) of light-absorbing azo dyes such as methyl red (MR), the reorientation effect is greatly amplified.12, 15 We have demonstrated the phototuning of PICs using nematic LCs, where we attributed the main mechanism at work to the intramolecular torque exerted by laser-excited azo dye molecules on the LC director axis.12

As an example, we carried out phototuning of a PIC-based bandpass filter resonator with blue-phase (BP) LC mixtures, which are optically isotropic as a result of their three-dimensional self-assembled photonic band gap structure.7 In our experiments, in addition to MR we used a BP mixture composed of 32wt% of the nematic LC E48, 32wt% of the nematic LC 5CB, and 36wt% of the chiral dopant S811, with a birefringence of 0.01. The resonator was in the form of a racetrack with a 500nm-wide silicon waveguide. As BP LCs have a considerably lower birefringence than 5CB, we also chose to carry out an experiment using a resonator with modified geometry to allow for a larger optical mode overlap with the LC material.16 In the modified resonator, the width of the Si waveguide was adiabatically thinned from 500 to 300nm in the course of 28μm (see Figure 1). In both resonators, the perimeter of the racetrack was 182.2μm, the radii of the curved portions of the track were 9.9μm, and the height of the silicon waveguide remained constant at 250nm. 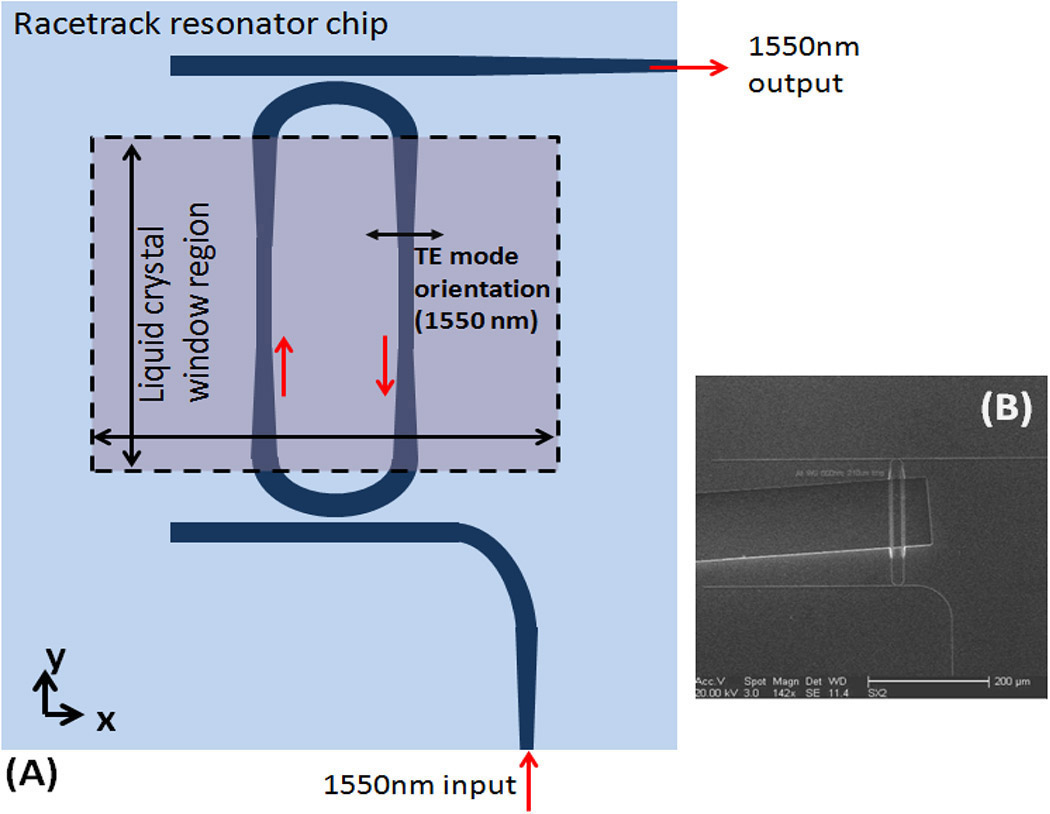 Figure 1. (A) A schematic diagram of a bandpass filter resonator in the form of a racetrack shows where a window for liquid crystals (LCs) is etched into the SiO2 cladding. The red arrows indicate the direction of propagation of the 1550nm IR source. (B) A scanning electron microscopy image of a resonator shows a window region for LCs. TE: Transverse-electric.

We carried out measurements to characterize the resonance of the BP LC-clad racetrack using transverse-electric polarized IR light at 1550nm in the fundamental mode of the waveguide and also an unpolarized 470nm Mightex LED source to tune the BP LC until saturation was reached. We determined the resonant wavelength of the modified structure by multiplying the effective refractive indices of the thin, tapered, and curved portions of the waveguide by the respective lengths (of the straight sections) or circumference (of a circle of which the curved section forms part), then adding the terms obtained for each portion.

Figure 2 shows that for an unmodified racetrack geometry, the total shift in resonance was 0.7nm and the response was saturated beginning at an energy density of 40J/cm2. Figure 3 shows that for a modified racetrack geometry, the resonance shift was 1.23nm and saturation occurred at an energy density of 30J/cm2. The change in refractive index of the optically tuned BP LC was 0.0041, which we attributed to surface-anchoring modification effects of laser-excited MR dye molecules. Similarly to other surface adsorption-mediated effects observed in MR-doped LC systems, alignment of the director axis on the surface as a result of adsorption can become persistent once it has developed. This was also borne out in our study: upon prolonged illumination, a component of the resonance shift persisted for tens of minutes when the excitation source was turned off.15, 16 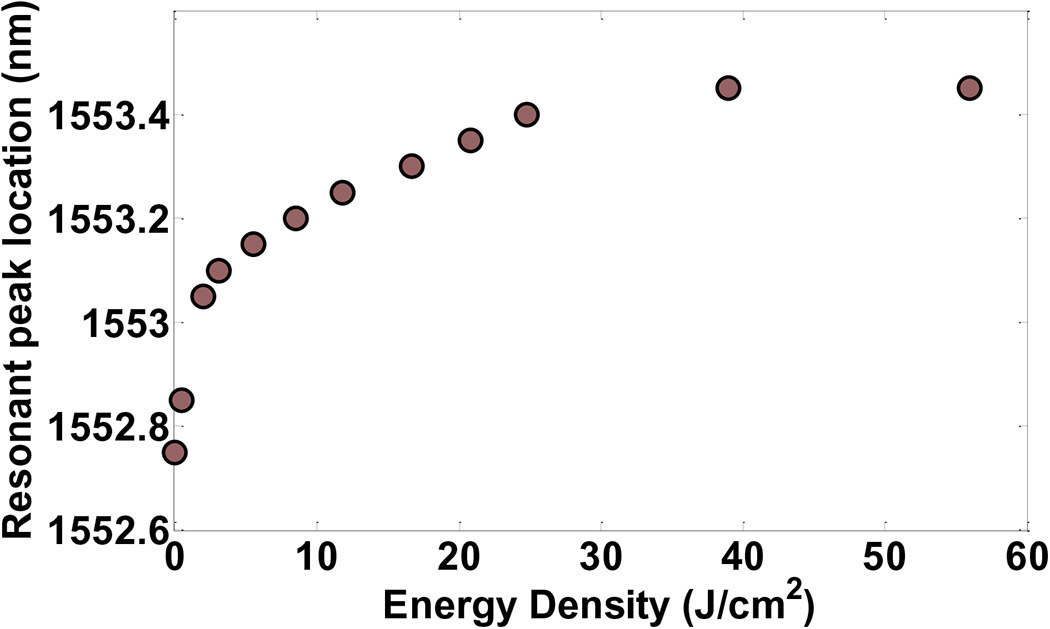 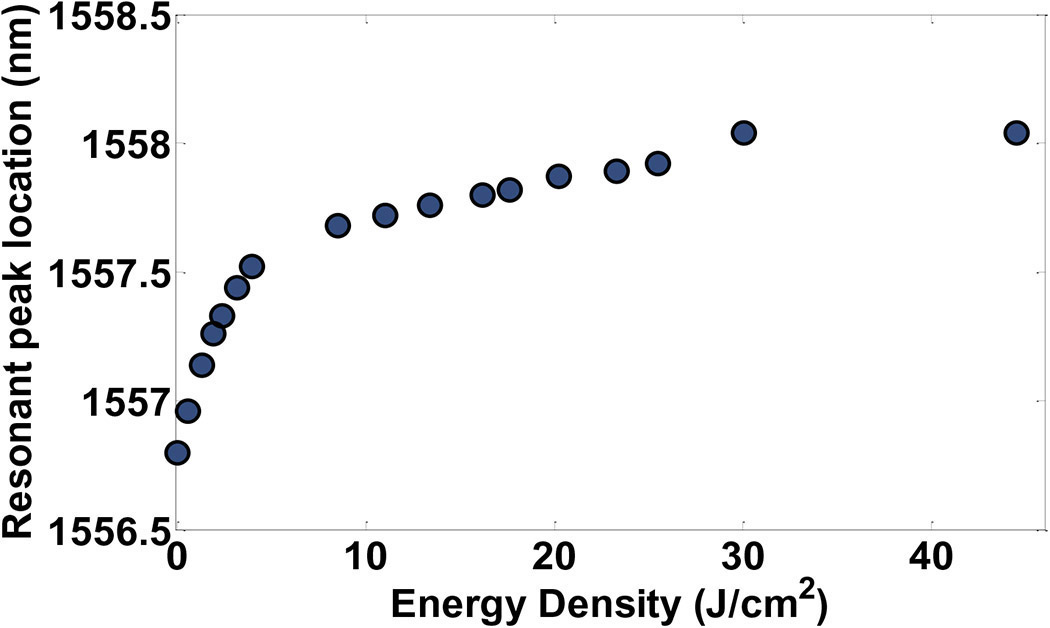 As a result of our experiment, we have demonstrated the ability to tune PICs using BP LC cladding. As optical tuning has the advantages of being non-contact and electrode-free and permits a range of device configurations, we expect the development of optically tunable silicon photonic devices to enable all-optical switching to play an increasingly central role in circuit components.

Joanna Ptasinski is an engineer at the SPAWAR Systems Center Pacific, where she has spent the last decade developing photonic technologies to transmit, process, and manage information essential to successful military operations. She has a PhD from the University of California, San Diego. She has been awarded 18 patents.

Iam-Choon Khoo is internationally known for his pioneering and leading work in LCs and nonlinear optical phenomena and applications. Since joining the Pennsylvania State University in 1984, he has established and directed the Nonlinear Optics and Liquid Crystal Research Laboratory. He is the author or co-author of over 600 technical publications and several books on nonlinear optics and LC optical physics. Ongoing research activities in his laboratory and collaborative research programs are centered on nonlinear and electro-optical properties of LCs and novel nanostructured refractive metamaterials and on studies of optical wave mixing, optical switching and modulation, optical limiting, and sensor protection enabled by unique properties of these optical materials.

Yeshaiahu Fainman is the chair and a Cymer Professor of Advanced Optical Technologies in Electrical and Computer Engineering at the University of California, San Diego (UCSD). Since 1990, he has directed research in the Ultrafast and Nanoscale Optics Group at UCSD and has helped make pioneering contributions to using near-field optical phenomena in inhomogeneous materials and metamaterials, nanophotonics, plasmonics, nonlinear optics of femtosecond pulses, and non-conventional imaging. His current research interests are in near-field optical science and technology compatible with CMOS manufacturing. He has contributed over 215 manuscripts to peer-reviewed journals and over 455 conference presentations and proceedings.