When you look at someone's face, you perceive more than just the surface: light penetrates tens to hundreds of microns through skin, depending on its wavelength. For cultural heritage objects such as paintings, 3D structure is equally important. Recent research suggests that the Mona Lisa has up to 40 layers of paint on her face. Da Vinci did not paint this way because he was obsessive; he did so because, centuries before a quantitative understanding of the details of absorption and scattering, he recognized what was needed for realistic perception. Understanding 3D structure thus clarifies an artist's technique, and also gives valuable information for arresting degradation or aiding restoration of the artwork. Unfortunately, traditional 3D imaging techniques have serious limitations. For example, x-ray methods cannot distinguish organic pigments, and usually require a synchrotron for high resolution. As a result, researchers study the most famous paintings in the world with a scalpel: taking cross-sections and imaging these in a microscope. However, even this task is impossible for objects such as pottery or parchments.

We have adapted novel biomedical imaging methods for noninvasive 3D imaging of artwork, which helps reveal an artist's technique and assists conservation.1 Recent work has extended applications to pottery, pigments on paper, and a wide range of organic and inorganic paints.2

Our approach uses enhanced control over optical fields (femtosecond laser pulse shaping or pulse train modulation) to develop new nonlinear microscopy techniques. Traditionally, nonlinear microscopy requires fluorescence, which is not found in many pigments. Our biomedical imaging, involving for example self-phase-modulation or transient absorption (pump-probe microscopy), uses near-IR light to examine molecular signatures that do not make light of a different color. These signatures are well established, but the conventional methods to study them require massive laser power, which is incompatible with fragile samples or tissue imaging. Instead, our modulation methods require average powers much less than that of a laser pointer. For example, pump-probe microscopy uses two highly stable trains of ultrafast laser pulses, with two different center wavelengths. The first (‘ pump’) pulse puts a very small number of molecules in the electronic excited state, and creates a corresponding hole in the ground state. Both of these population features evolve in complex ways, and we detect that evolution by changes in the absorption of a second delayed ‘ probe’ pulse.

Adapting the work from tissue (where the strongest chromophores are melanins or hemoglobin) to cultural heritage items required a team with broad interdisciplinary expertise. We conducted imaging experiments on a 14th century painting, The Crucifixion by Puccio Capanna (see Figure 1), which showed that pump-probe imaging could generate 3D images without damage.1 Our more recent work showed that we could also use these methods to image firing temperature in pottery,2 or to visualize how paints cling to fibers in paper or parchment, and showed that the technique is applicable to a wide range of organic and inorganic pigments. Thus, for example, lapis lazuli and the 19th century replacement ultramarine blue produce radically different pump-probe decays. Likewise, many similar-looking red organic pigments (nearly impossible to distinguish by other spectroscopic methods) give distinctive and separable signatures. 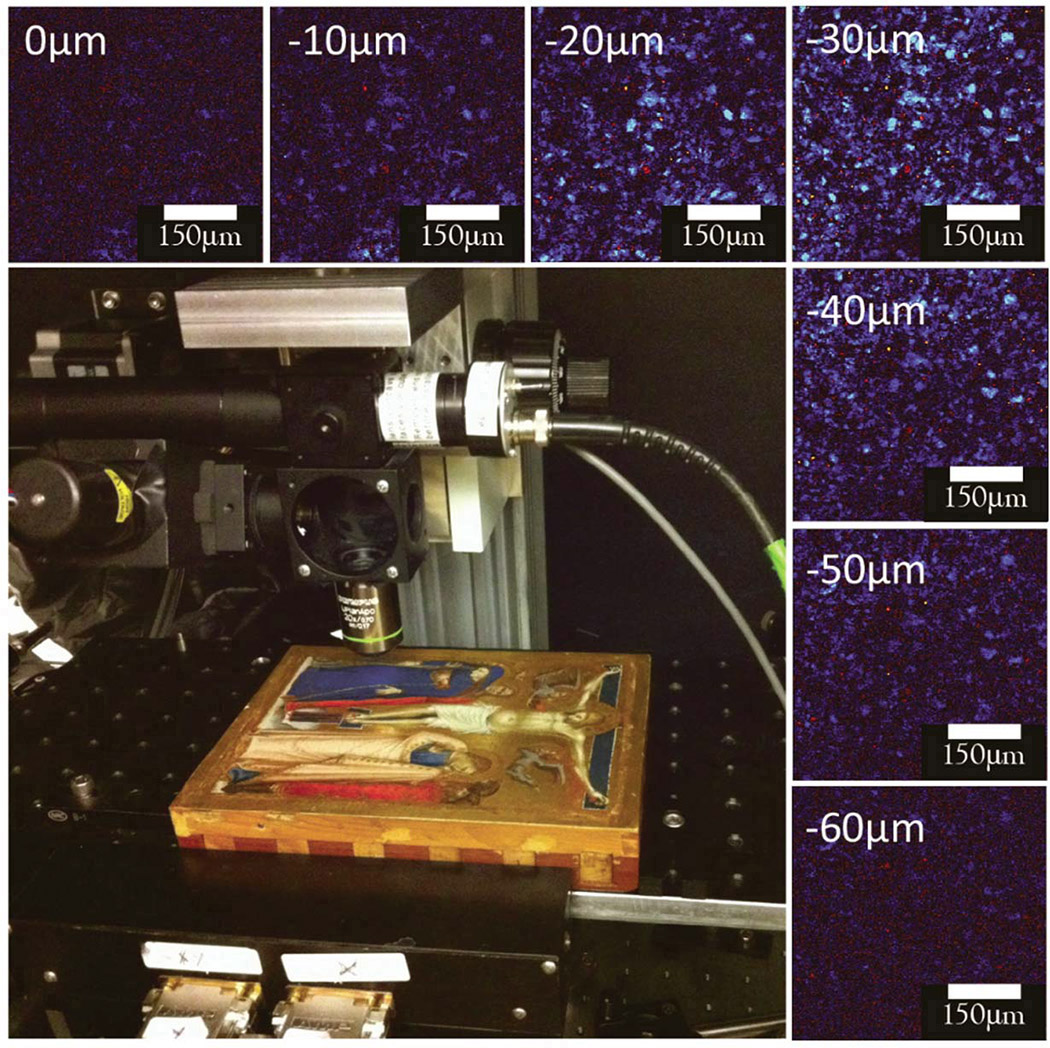 Figure 1. Puccio Capanna's ‘The Crucifixion’ (1330) surrounded by 720nm–810nm wavelength pump-probe images of lapis lazuli at different depths with one specific pump-probe delay. Changing the delay and the two wavelengths readily distinguishes between even very similar colors of pigment, and images impurities. Although the total applied laser power is 1(Painting loaned from the North Carolina Museum of Art and imaged at Duke University, NC. Image copyright of author.1)

In summary, we have adapted biomedical imaging methods to permit noninvasive 3D imaging of artwork in pottery, paper, and various paints, while requiring minimal power. We have shown how these techniques can reveal an artist's technique, assisting conservation efforts. Our ongoing work focuses on the development of ‘ pigment libraries’ to enable conservators to unravel the complex mixtures found in real paintings, and the development of next-generation imaging systems that could be much more portable.

Warren S. Warren is the James B. Duke Professor at the Departments of Physics, Chemistry, Radiology, and Biomedical Imaging, and is director of the Center for Molecular and Biomolecular Imaging. He has won national awards from the American Chemical Society, the American Physical Society, the Optical Society of America, and others.