Phonons represent collective excitation states that occur in periodic elastic arrangements of atoms or molecules. High-frequency (more than 10GHz) phonons are less sensitive to thermal decoherence than lower-frequency phonons. These high-frequency phonons, however, are outside the range of most piezoelectric actuators, and alternative means of control are therefore required. In optomechanical (OM) systems, light interacts with mechanical objects.1 Radiation pressure forces are thus commonly used to activate coherent mechanical oscillations.2 So-called phonon lasing is the regime in which mechanical oscillations are self-sustained, monochromatic, coherent, and have high amplitudes. The phonon lasing regime in OM systems is commonly achieved by means of dynamical back-action (i.e, the radiation pressure force is delayed in response to a mechanical deformation), at frequencies of up to a few gigahertz.3 To be efficient, however, these methods require high-quality factor modes and high OM coupling rates. The requirements of phonon lasing techniques are thus difficult to fulfill.

Phonons play an important role in the physical properties of condensed matter (e.g., thermal or electrical conductivity), and over the past few years there has been a steady increase in the amount of research on phonons.4 The term ‘phononics’ has now entered the scientific vocabulary to indicate a platform where coherent phonons can be generated, harnessed, and detected. Mechanical (i.e., phonon) lasing can only be achieved if the mechanical losses of the OM system can be neutralized, no matter what pumping mechanism is used. Although dynamical back-action can be used to achieve mechanical lasing, the field-enhanced cooperativity (a figure of merit) must be at least one, and the system must be in the sideband resolved regime.

We recently reported a new lasing method for phonon control. In our approach, coherent high-amplitude mechanical oscillations within a one-dimensional OM crystal are produced in response to an anharmonic modulation of the intracavity radiation pressure force.6 This modulation is a consequence of spontaneous triggering in the optical cavity of a self-pulsing limit cycle (i.e., a closed trajectory along which the system oscillates in a periodic manner). In other words, there is a stable and dynamic interplay between the thermo-optic effects and dispersion of free carriers (i.e., electrons and electron holes) in the OM crystal.7

With our self-pulsing laser mechanism we are able to achieve phonon lasing under more relaxed configurations than with conventional methods. Namely, we operate our devices deep within the unresolved regime (where the mechanical period is greater than the radiative lifetime and dynamical back-action is very inefficient) and with field-enhanced cooperativity values within the 10−2 range. We therefore use relatively low-quality factor modes (102), and single-particle OM coupling rates as low as a few tens of kilohertz, for our phonon lasing technique. We do not require extreme optimization of designs, nor top-class fabrication facilities, competencies, or techniques to achieve these performances. Instead, we fabricate our devices out of standard silicon-on-insulator wafers. In addition, the patterns for these devices are written using an electron beam and are transferred to the silicon using a reactive ion etching technique. We use wet etching in buffered hydrofluoric acid to remove the buried oxide layer and to release the beam structures (see Figure 1). 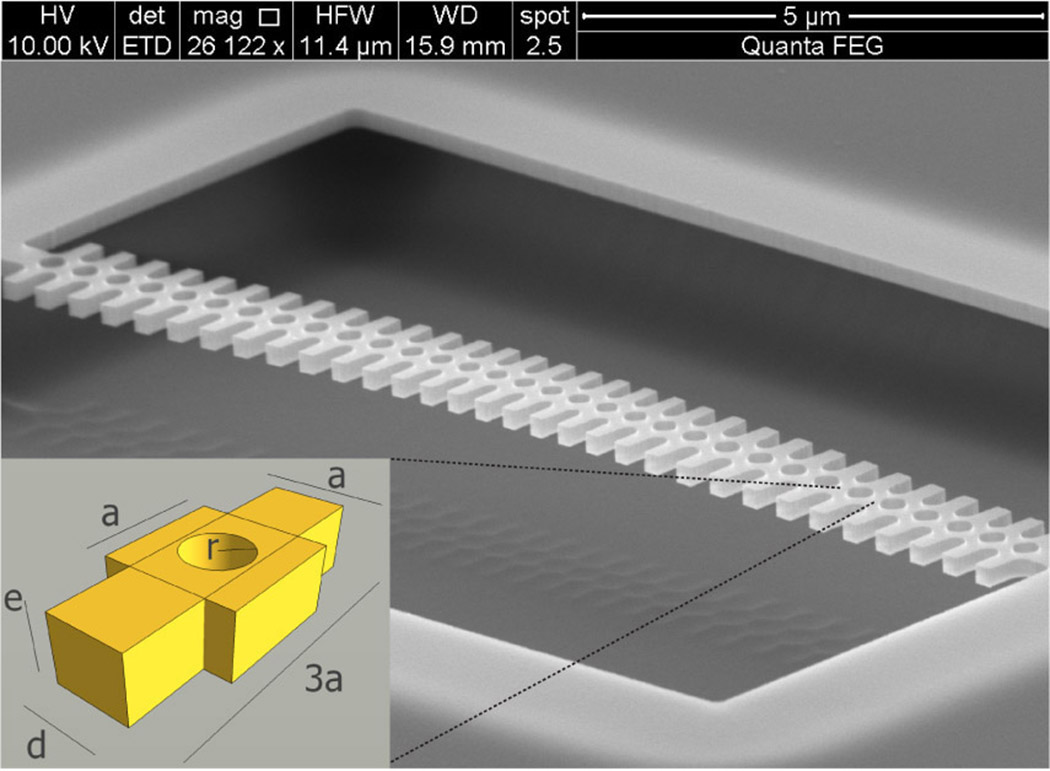 Figure 1. Scanning electron micrograph of an optomechanical (OM) crystal used for the new phonon lasing technique.5The inset shows a sketch of the unit cell and the geometric parameters. The cells of the crystal have nominal values of a = 500nm, r =150nm, d = 250nm, and e =220nm.

The feedback produced by the coherent mechanical oscillations on the self-pulsing mechanism makes our coupled system a frequency-entrained self-stabilized oscillator. Because of this self-stabilizing feature, our device is extraordinarily robust to wavelength or power fluctuations that occur within the continuous-wave laser source (which we use as a pump). We use wide dynamical frequency tuning of the self-pulsing mechanism to produce many frequency-entrained regions that are associated with the coherent amplification of different mechanical modes (at up to hundreds of megahertz). We can obtain different dynamics by simply tuning the self-pulsing frequency, by changing the wavelength of the laser that we use to pump the optical cavity.

In a set of experiments, we have demonstrated that it is straightforward to move from an isolated self-pulsing mode to stable phonon lasing—see Figure 2(b)—and then to a chaotic regime (where the trajectory is no longer a limit cycle), as shown in Figure 2(a). We have been able to successfully reproduce our experimental dynamics by numerically solving the four-dimensional coupled non-linear system. In this process, we describe the temporal evolution of the free-carrier population, the temperature difference (with respect to the surroundings), as well as the physical deformation and velocity of the OM cavity.6 Our simulated trajectories, which are associated with the stable phonon lasing regime and the chaotic counterpart, are shown in Figure 2(c) and (d). 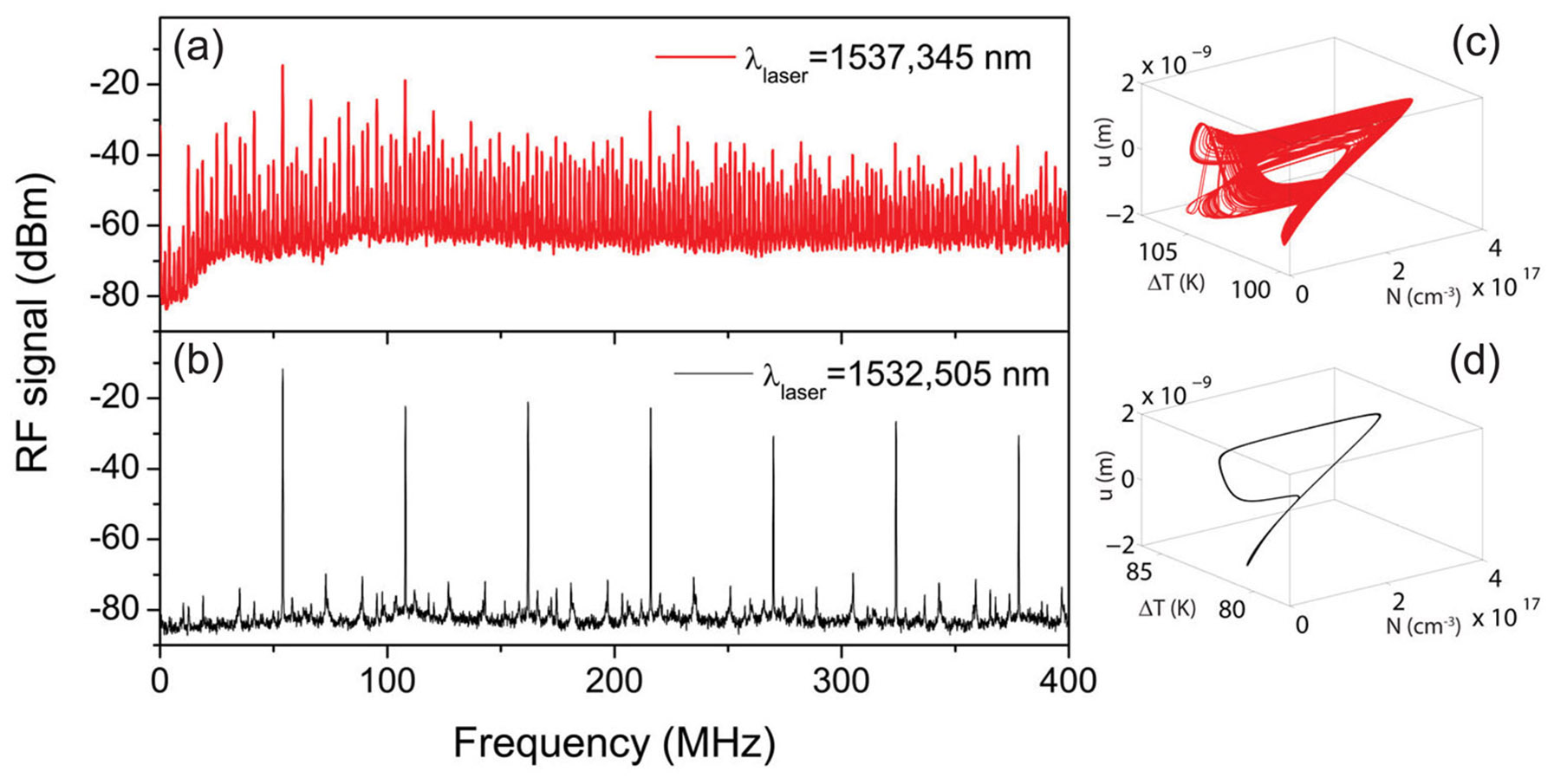 Figure 2. Radiofrequency (RF) spectrum of the transmitted optical signal used in the experiments. The spectrum in the case of a stable limit cycle is shown (bottom panel) and within a chaotic regime (top panel). The eigenfrequency of the phononic mode in the lasing regime here is 54MHz. Simulations of the phase-space trajectories associated with the two separate situations are shown in the right panels. λlaser: Laser wavelength. N: Number of free carriers. ΔT: Temperature difference. u: Physical deformation of OM crystal.

We use self-pulsing dynamics—activated in an OM crystal—to achieve phonon lasing of mechanical modes, with ordinary quality factors and single-particle OM coupling rates. Our coupled system is self-stabilized and therefore robust to fluctuations in the laser source. In addition, our mechanism can be operated at atmospheric temperatures and pressures, and therefore has several potential applications (e.g., for sensing, or intra-chip time-keeping). Our future work will be focused on engineering the self-pulsing dynamics of our system, i.e., by tailoring the characteristic thermal and free-carrier recombination lifetimes. This will allow us to scale the phonon lasing frequency, up to tens of gigahertz. Furthermore, since high-intensity sound waves can also change the electronic properties of nanostructures, our phonon lasers could be used as high-speed clocks. By synchronizing the weakly coupled OM oscillators—either in the limit cycle or the chaotic regime—we may be able to expand the applications of our devices into the realm of secure communications. We also plan to integrate our silicon-on-insulator devices with electronic and photonic systems. This will allow us to create hybrid systems with added functionalities.

The authors acknowledge financial support from a European Research Council advanced grant (ERC-FP7-321122), from the European Commission (ICT-FP7-233883), and from Spain's Ministry of Economy and Competitiveness (MAT2012-31392).