Quantum dots (QDs) are powerful candidates for next-generation displays because of their superior luminescent properties, such as narrow emission bandwidths, high quantum efficiency, and good photostability, as well as compatibility with solution processing. Electroluminescent (EL) devices with QDs enable ultrathin displays and solid-state lighting, with the advantages of high color purity and broad color gamuts. They are also well suited to flexible and rollable electronic devices, which are less than 300nm thick.

Despite these advantages, colloidal QDs are solution-processable only, so it is difficult to apply them to other useful processes such as patterning, transferring, and multi-stacking for multi-functional electronic devices. As a result, the lack of size-selective patterning of QDs has hindered the realization of full-color displays.

For fine patterning and multi-stacking of QDs, transfer-printing based on pick-and-place of fully dried QD layers is desirable. This technique enables fabrication of flexible and stretchable optoelectronic devices because it allows for unrestricted transfer of the required parts of the QD layers to specific positions in the device stack, and it enables this on various substrates, such as plastic sheets or elastomeric rubbers.

One approach patterns dried QD films formed on self-assembled monolayer-treated silicon wafers to reduce surface energy.1 A structured elastomeric stamp picks up the films and prints them on the device stack: see Figure 1(a). In our method, we quickly pick up the QD layer on the donor substrate to increase the adhesion strength between elastomeric stamp and QD film, and then we print the QD layers remaining on the embossed relief of the structured stamp on a semiconducting polymer-coated backplane device. We print the red-, green-, and blue-emissive QD films on the pixels in the shape of line patterns, demonstrating active matrix-driven full-color QD displays, as shown in Figure 1(b). 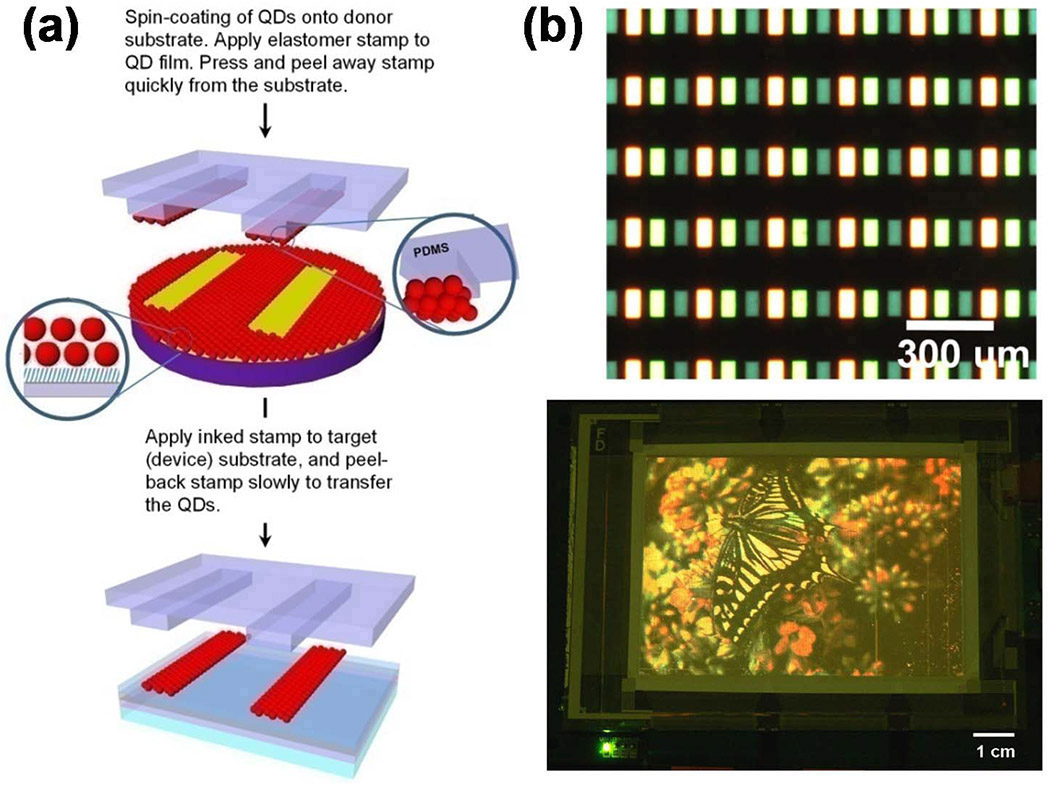 A second technique involves stacking ultrathin QD layers using a sacrificial polymer in a layer-by-layer structure.2 In QD EL devices, the optimum thickness of the active layer is limited to 35–40nm. For this thin active layer to be functional, we must stack various 2D monolayers of assembled nanomaterials such as QDs. In our work, we have achieved dry pick-and-place transfer-printing for a QD monolayer by inserting a lifting polymer layer under the QD monolayer, which allows the complete lift-off of the QDs during the pick-up process: see Figure 2(a). This lifting layer dissolves in water immediately before printing. 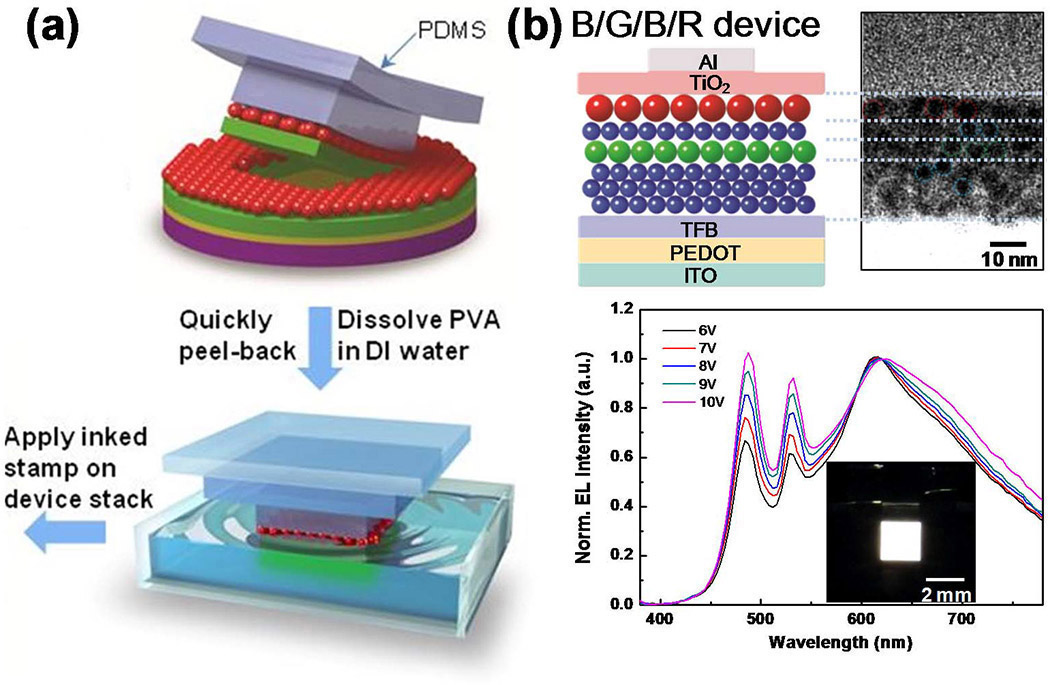 Using this method, we can easily print one QD monolayer onto another, resulting in stacked and heterogeneous vertically combined QD monolayers. We used various combinations of these as an active layer in LEDs and were able to change the EL intensities of the red, green, and blue emissive QDs and tune the white balance of three individual peaks for application to white LEDs: see Figure 2(b).

We also devised a method of high-resolution patterning of QDs by intaglio transfer-printing.3 The QD layer, picked up by a flat elastomeric stamp, makes light contact with the intaglio trench and slowly detaches to remove unnecessary parts of the QD film. We printed the remaining QD layer on the stamp on the device stack: see Figure 3(a). This technique solved the problem of the edge of the stamp not picking up QDs cleanly because of insufficient pressure applied to the edge of the stamp's embossed areas. Consequently, we could create high-resolution aligned RGB pixels, ranging from 441 pixels per inch (30μm pixel size) to 2,460ppi (6μm pixel size) by the multiple printing processes: see Figure 3(b).

Figure 3. (a) Schematic illustration of the intaglio transfer-printing process using a flat PDMS stamp. (b) The photoluminescence image showing aligned RGB pixels with resolution of 2,460 pixels per inch (p.p.i.).

In summary, we demonstrated dry pick-and-place-based transfer-printing techniques that enable patterning QD layers with ultrahigh-resolution and make it possible to create 3D-layered nanostructures composed of heterogeneously stacked QD monolayers in different sizes. Our future work will focus on high-resolution displays and multi-functional optoelectronic sensors with flexible and stretchable forms using these techniques.

Tae-Ho Kim is a senior researcher. He received a BS from Hanyang University, and PhD in chemical engineering from Korea Advanced Institute of Science and Technology. After working at the University of Illinois at Urbana-Champaign as a post-doctoral scholar, he focused on optoelectronic devices using printed nanomaterials.

Dae-Hyeong Kim obtained a BS from Seoul National University, and PhD in materials science and engineering from the University of Illinois at Urbana Champaign. He is currently an assistant professor in chemical and biological engineering, focused on technologies for flexible and stretchable electronic devices using nanomaterials.