As the the big data revolution continues to gain pace, existing data storage technologies are becoming increasingly strained. Observers are noting that Kryder's law, which predicts a 40% increase in data storage density per year, has been flagging in recent years.1 However, holographic data storage (HDS), in which data is recorded optically throughout the volume of a medium, shows promise for helping to alleviate the data glut in areas including cold and cool storage, searchable archives, and digital preservation.

In HDS, data is stored in volume holograms that contain images of a microdisplay in which the state of each pixel corresponds to one or more data bits. By employing multiplexing techniques (e.g., the Bragg effect) to store hundreds or thousands of overlapping holograms in a common volume of recording media, extremely high storage densities can be achieved.2–4 HDS is a truly 3D data storage technology with a theoretical capacity of petabytes in a single recording medium.

HDS data is traditionally encoded using a bright or dark pixel state to represent a one or a zero data bit. Detection is performed using a photodetector to measure the intensity of the holographic image of the pixel. The relative simplicity of this scheme is somewhat undermined by low sensitivity and a poor signal-to-noise ratio (SNR). Additionally, the phase of the recording beam must be scrambled to mitigate deleterious intensity spikes and other write-induced holographic noise.5, 6

To address these shortcomings, we have developed a new coherent-readout holographic data channel, dubbed quadrature homodyne detection (QHD). In QHD, a portion of the laser light that is used to read the hologram is diverted directly to the detector, where it interferes with the holographic signal and serves as a local oscillator for homodyne detection. Using this technique, the complete complex amplitude of the holographic optical field can be determined algorithmically using two or more sequentially captured phase-shifted images of the same hologram. Coherent detection significantly improves SNR and increases sensitivity by optical amplification.7 Moreover, coherent detection enables the use of data modulation schemes that involve phase rather than just intensity. Phase modulation virtually eliminates detrimental intensity spikes and write-induced noise, thereby eliminating the need for phase scrambling.

Phase modulation also doubles the number of degrees of freedom accessible for recording. We employed quadrature phase shift keying (QPSK), wherein the pixels of the recorded hologram may assume one of four relative phase states: 0, 90, 180, or 270°. Each of the four states is recorded with equal (‘on’) pixel intensity. QPSK thus permits two bits to be recorded per pixel, resulting in a direct doubling of data density compared to binary modulation. The use of more phase states (n-PSK) or quadrature amplitude modulation may further increase data density.8 The demonstration system, based on our recently developed photopolymer (DRED),9 can be seen in Figure 1.10 This new holographic medium can record 4–8 times as many holograms as its predecessor (Tapestry, by InPhase Technology Inc.). 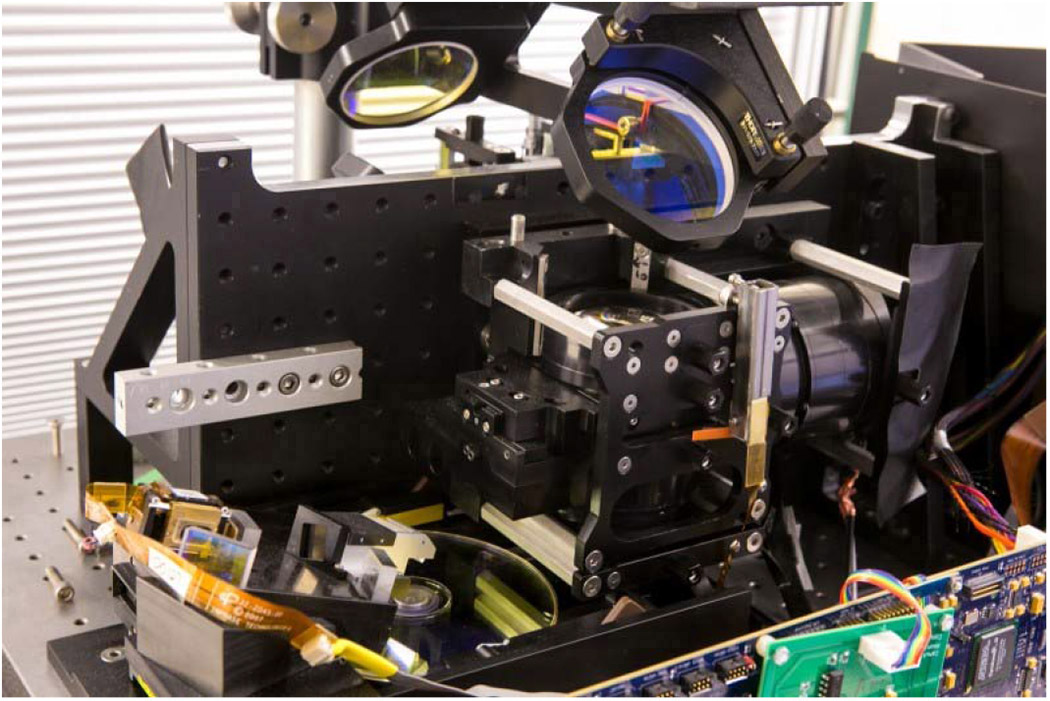 Figure 1. Our demonstrator platform. The system uses coherent-readout methods with our new DRED photopolymer (1.5mm-thick disk at the base) in combination with dynamic-aperture multiplexing. It has demonstrated recovery at a raw areal density of 2.2Tbit/in2, which represents roughly twice that of current hard drives. With future enhancements, the system should reach nearly 6.0Tbit/in2.

In practice, coherent-readout HDS is complicated by the fact that recovered holograms inevitably contain an unknown spatially varying phase term. This phase term (or ‘carrier wavefront’) can arise due to a variety of factors (e.g., thermal shrinkage or expansion, or even very small errors in the positioning of the hologram with respect to the readout head). The presence of the carrier wavefront means that, for example, pixels encoded in the 0° phase state in one region of the image may appear with an absolute phase that is entirely different from that of 0° pixels in another region. Thus, in order to correctly decode phase-modulated data, the carrier wavefront must be accurately measured and removed (demodulated) from the detected phase values.

We developed a novel algorithmic method capable of demodulating carrier wavefronts for our HDS-density demonstrations. This method relies on embedding known 8×8 pixel patterns, called reserved blocks, into each recorded microdisplay image. By performing cross-correlation operations against the known patterns upon readout, these reserved blocks are detected within each of the phase-shifted recovery images. The strength of each cross correlation corresponds to the projection of the image region onto the pattern, and the absolute phase of the region becomes a function of the relative strengths of the respective phase-shifted cross correlations.

In an ordinary data-bearing hologram, the reserved blocks account for only 1.6% of pixels, with the rest available for data. Additionally, every hundredth hologram is a dedicated demodulation hologram, consisting entirely of reserved blocks. These demodulation holograms make it possible to periodically measure the carrier wavefront at high resolution, while the more sparse data hologram reserved blocks are used for incremental estimate updates. Figure 2 shows a typical carrier wavefront from a demodulation hologram. The high-frequency fringes are detected with a bit-error rate equal to that of lower-frequency regions. Moreover, the algorithm has been shown to function well in the presence of over 100 waves of tilt. The ability to tolerate large carrier-wavefront aberrations algorithmically will greatly reduce the required precision and cost of a commercial system. 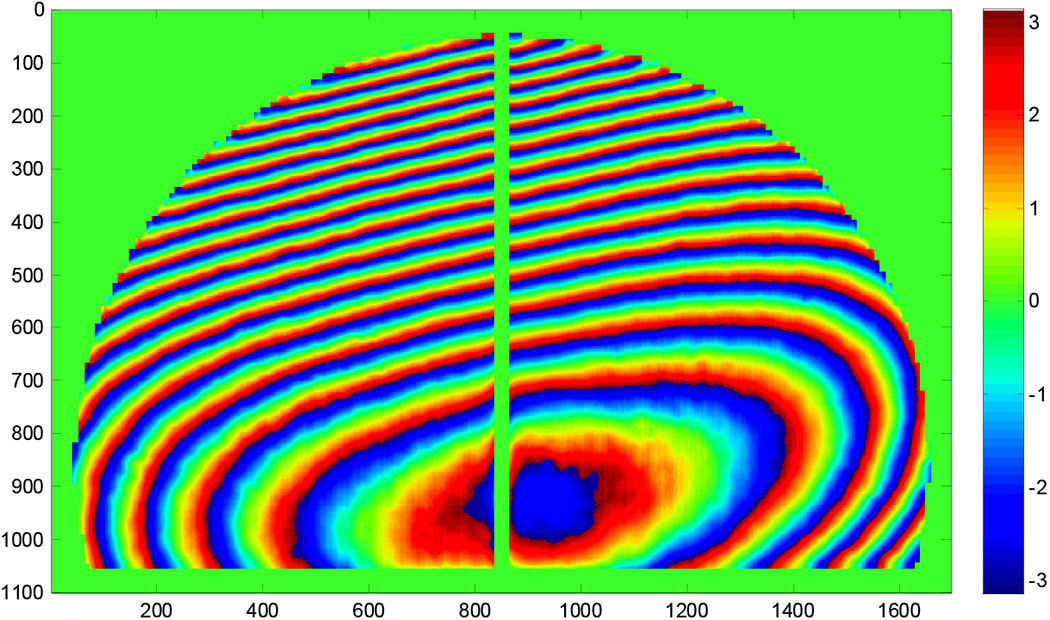 In summary, we have developed a method to demodulate the carrier wavefront from phase-modulated holograms using a purely algorithmic measurement technique, showing promise for coherent-readout HDS. Enhancements to the system's microdisplay and detector could lead to significant recording density increases. We are currently working to improve the density and robustness of the system and seeking enterprising collaborators for a commercial effort.