Single-layer graphene (SLG) attracts much attention because of its unique properties (e.g., near-ballistic transport and extremely high carrier mobility at room temperature).1 Edges occur naturally in SLG samples,2 but they also appear when SLG is ‘cut’ into nanoribbons and quantum dots. The properties of SLG are strongly dependent on the orientations of such edges. In contrast to SLG, the edges of bilayer graphene (BLG) are complicated, i.e., the top and bottom layers of graphene have their own distinct edges. Ideally, the edges of the two layers are closely aligned and they form an ideal BLG edge. In most real cases, however, there is a misalignment distance between the edges.3 BLGs that are produced with mechanical exfoliation processes have a high probability of exhibiting misaligned edges. The misalignment distance in these cases can be as large as the micrometer scale, or as small as several nanometers. It has been difficult, however, to design a fast and nondestructive technique to measure the misalignment of BLG edges at the nanometer scale.

Historically, Raman spectroscopy has been the ideal characterization tool for carbon materials such as SLG and BLG.4 In particular, identification of the so-called defect-peak (D-peak) has been used widely to probe defects in graphene samples. Samples of SLG, however, do not usually have sufficient structural defects (because of the high crystallinity that is obtained with mechanical cleavage) for the D-peak to be observed. The overtone of the D-phonon (i.e., the 2D peak), however, is always present in SLG because no defects are required for its activation. For pristine samples of SLG, the D-peak is therefore only present at the edges, which act as defects because the transition symmetry is broken. Localization of the D-peak in the proximity of an edge in SLG is illustrated in Figure 1(a).2 During this process, an incident photon generates an electron–hole pair and a scattered photon is produced from the pair recombination. A phonon is also emitted and scattered. For Raman double-resonance (the process that gives rise to the D-peak) to occur, an electron must meet a hole in the vicinity of the SLG edge, and they must have almost exactly opposite momenta.2 As such, the phonon and the edge cause electrons to be scattered backwards. In this case, there is a typical critical distance (dc) of about 3.5nm from the edge of SLG (i.e., at greater distances photo-excited electrons and holes in SLG cannot be scattered by its edge).2 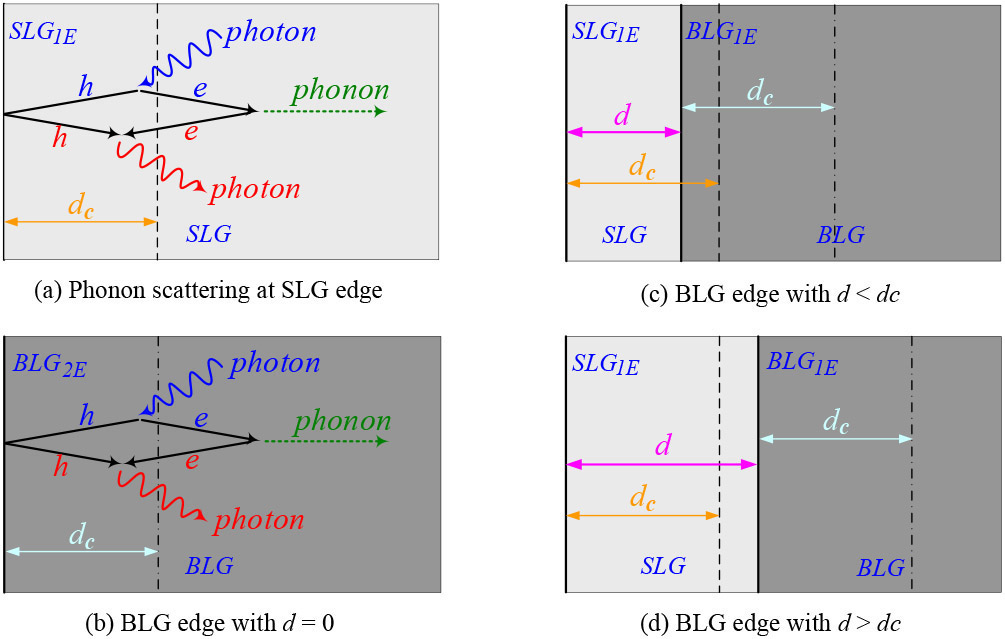 Figure 1. Real-space representation of the scattering process that gives rise to the defect-peak (D-peak) from (a) single-layer graphene (SLG) and (b) bilayer graphene (BLG) edges. The wavy arrows represent the (blue) incident photon that generates an electron-hole pair and (red) the scattered photon that is produced by pair recombination. The solid black arrows indicate the quasi-classical trajectories of the electron (e) and the hole (h). The dashed green arrow represents the emitted phonon. Illustrations are also given for BLG edges that have a misalignment distance that is (c) less than the critical distance (dc) and (d) more than dc. The misalignment distance, d, is the space between the top and bottom edges of the graphene layers (solid black vertical lines). When d=0, the two edges of a BLG sample are completely aligned (BLG2E). SLG1E and BLG1Eare the edges of the SLG and BLG layers, respectively. The dashed and dashed-dotted lines represent the dcof the SLG1E and BLG1E, respectively.

We further developed this Raman spectroscopy technique to measure the D-peak from BLG edges (see Figure 1). With this method we can characterize the misalignment distance (d) between the top and bottom graphene layers at a variety of scales (i.e., micrometers to nanometers) in BLG samples. When the edges of both layers in a BLG sample are closely aligned, they have similar critical distances (beyond which the electrons and holes cannot be scattered by the edges of BLG). Misaligned BLG samples, however, can have edges with different characteristics. In these cases, we refer to the top and bottom graphene layer edges as BLG1E and SLG1E, respectively.

It is possible for d between the BLG1E and SLG1E to be smaller or larger than dc. When d is greater than dc, the intensity of the D-peak at the edges is proportional to the edge lengths. When d becomes less than dc, however, the BLG1E and SLG1E D-peak intensities are determined by both the edge lengths and d. In contrast, the intensity of the 2D-peak for the SLG and BLG components of a BLG sample is proportional to the spot size of the Raman laser. We are able to measure misalignment distances of only several nanometers because of the difference in the behavior of the D-peak and the 2D-peak for the SLG1E and BLG1E.

We used our methodology to characterize a BLG flake with a narrow ribbon of SLG on its right side: see Figure 2(a). The width of the SLG ribbon is not constant, and it eventually becomes so narrow that it cannot even by observed with atomic force microscopy. We made Raman measurements at five different points along the length of the SLG ribbon: see Figure 2(b). We found that Raman scattering of the 2D-peak for the SLG component of the sample was about 1.3 times more efficient than for the BLG component.3 The intensity of the SLG 2D-peak was, therefore, comparable to that of the BLG component at the point marked sb in Figure 2(b). At the point sc, however, the 2D-peak intensity of the SLG component was much weaker than that of the BLG component. This indicates that the area of SLG was smaller than the BLG area at sc. Based on the ratio of the 2D-peak for the SLG and BLG components, we estimated a misalignment distance of 48nm for the BLG edges at sc.3 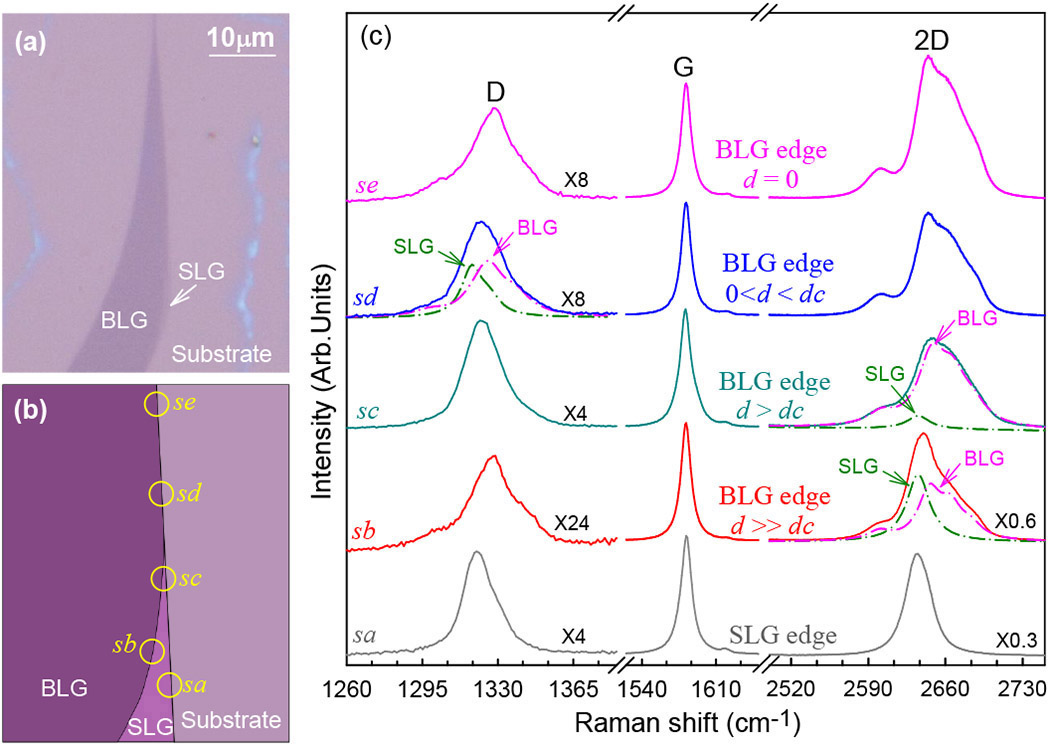 Figure 2. (a) Optical image of a BLG sample exfoliated on a silicon dioxide/silicon substrate, and in contact with a sample SLG piece. (b) Sketch map of the image shown in (a), with five sampling points labeled sa, sb, sc, sd, and se. The SLG1E image is exaggerated so that the SLG part of the sample can be seen. (c) Raman spectra measured on the BLG edges at the five spots labelled in (b). The dashed-dotted lines are the fitted D-peak (D) and overtone of the D-phonon (the 2D-peak) spectral components of the SLG and BLG at sb, sc, and sd, respectively. G: G-peak, which corresponds to the E2g phonon at the Brillouin zone center of SLG and BLG. X: Magnification.

At the point sd, the SLG area was so small that its 2D-peak could not be distinguished from the strong BLG signal. As d is still larger than dc at this point, the D-peak of the SLG component dominated the D-peak of the BLG edge. This is because of the higher Raman efficiency of the SLG D-peak. Once d became less than dc (at the BLG edge), however, the SLG D-peak intensity decreased and the BLG D-peak intensity increased with decreasing d. At sd, the SLG D-peak intensity was comparable to that of the BLG component. This means that d was smaller than dc. We estimated that d at this point was about 3.5nm. At point se, the intensity of the D-peak was identical to the intensity at BLG1E. In addition, the 2D-peak was identical to that of the BLG. We found that the edges at se were, therefore, closely aligned with the BLG edges (i.e., d is equal to zero).

We have proposed a new approach to the identification of misalignment distances that occur between the top and bottom edges of graphene layers in bilayer graphene samples. We characterized the intensity and profile of the Raman D-peak and 2D-peak obtained at the BLG edges. With our technique, we are sensitive to a range of scales, from micrometers to nanometers. We tested our methodology on a real sample, and we were able to make measurements that were far beyond the diffraction limit of a laser spot and the resolution of an optical image. We are now working to apply our technique to the measurement of misalignment distances at the edges of multilayer graphene samples.5

Ping-Heng Tan received his BS in physics from Peking University in 1996 and his PhD in condensed matter physics from the Chinese Academy of Sciences in 2001. He is now a professor. His current research is focused on 2D layered, nanocarbon, and novel low-dimensional semiconductor materials.

Xin Zhang received his BS in physics in 2010 from Soochow University, China and his PhD from the Chinese Academy of Sciences in 2015. His main research interests are the optical properties of 2D layered materials.