During billions of years of evolution, living cells have optimized a large complex system of protein-based machines that allow single cells to perform complicated tasks, such as cell division, obtain energy from the surrounding medium, self-propel, and sense the environment, to mention a few. A current research trend is to employ biological motor proteins in artificial environments to perform tasks that we design to our benefit.

Flagellated bacteria represent a highly sophisticated class of micrometer-scale machines that are driven by molecular motor complexes. They have a highly efficient mechanism for motion in the low Reynolds number regime (where viscous forces dominate over inertial forces). Consequently, these bacterial nanomotors are ideal candidates for the actuation and powering of microsystems.

Different approaches for exploiting the motion of bacterial nanomotors have been used in the last few years. For instance, self-propelling bacteria, such as Escherichia coli and Bacillus subtilis, attached on solid surfaces (bacterial carpets), have been used to pump liquid and to enhance mixing in microfluidic systems. In addition, they have been employed to transport or rotate microparticles, ranging from conventional microspheres to more complex abiotic objects such as microscopic gears.1

A prerequisite for reasonable use of such biological motors in general and efficient co-operative behavior in particular is an attaching method (that is, to adhere or tether a single or a multitude of individual biological cells to a specific surface or microparticle in a defined way) that gives the best possible control over the location and state of every single cell. Traditional fabrication and bonding techniques for the microassembly of bacteria-based microdevices rely on site-selective functionalization of the abiotic object surface such that the biological specimens attach only where the surface has been modified.

However, micropatterning and microassembly processes require relatively high effort, suitable material know-how, and equipment. Moreover, fine control over individual bacteria is very limited, and the approach lacks flexibility and re-configurability with respect to new arrangements. We have developed a general solution to this problem that uses a holographic optical tweezer (HOT) workstation that can simultaneously create tens of optical traps, which are used for the controlled assembly of single bacteria at specific locations. To achieve these optical trapping landscapes, we modulate the phase front of a laser beam with a phase-only spatial light modulator (SLM) to generate multiple optical tweezers at the sample plane. Each of the optical traps can be controlled independently in real time so that several bacterial cells and particles can be manipulated simultaneously.2In addition, suitable selection of the laser wavelength (in our case λ=1064nm), power level, and exposure time ensures that light absorption by the biological specimen is insufficient for serious damage during assembly.

By combining the HOT's full 3D manipulation of multiple bacteria with controlled attachment on functionalized surfaces, we have demonstrated actuation of microsystems by self-propelling bacteria. In the first scheme, we optically trapped, moved, and attached arrays of multiple bacterial cells in a controlled way on homogeneous and inexpensive polystyrene-coated surfaces (see Figure 1).3 After applying the trapping laser beam, the bacteria rotated, typically at frequencies of a few hertz, around a rotation axis in close proximity to the cell body as indicated by their relative positions in the image sequence. These bacteria are not only obviously motile, but following a simple mechanical model are tethered to the surface with exactly one flagellum. In this way, rotation of the bacterial microsystem induces a continuous flow that could mix fluids or induce dynamic fluid motion. 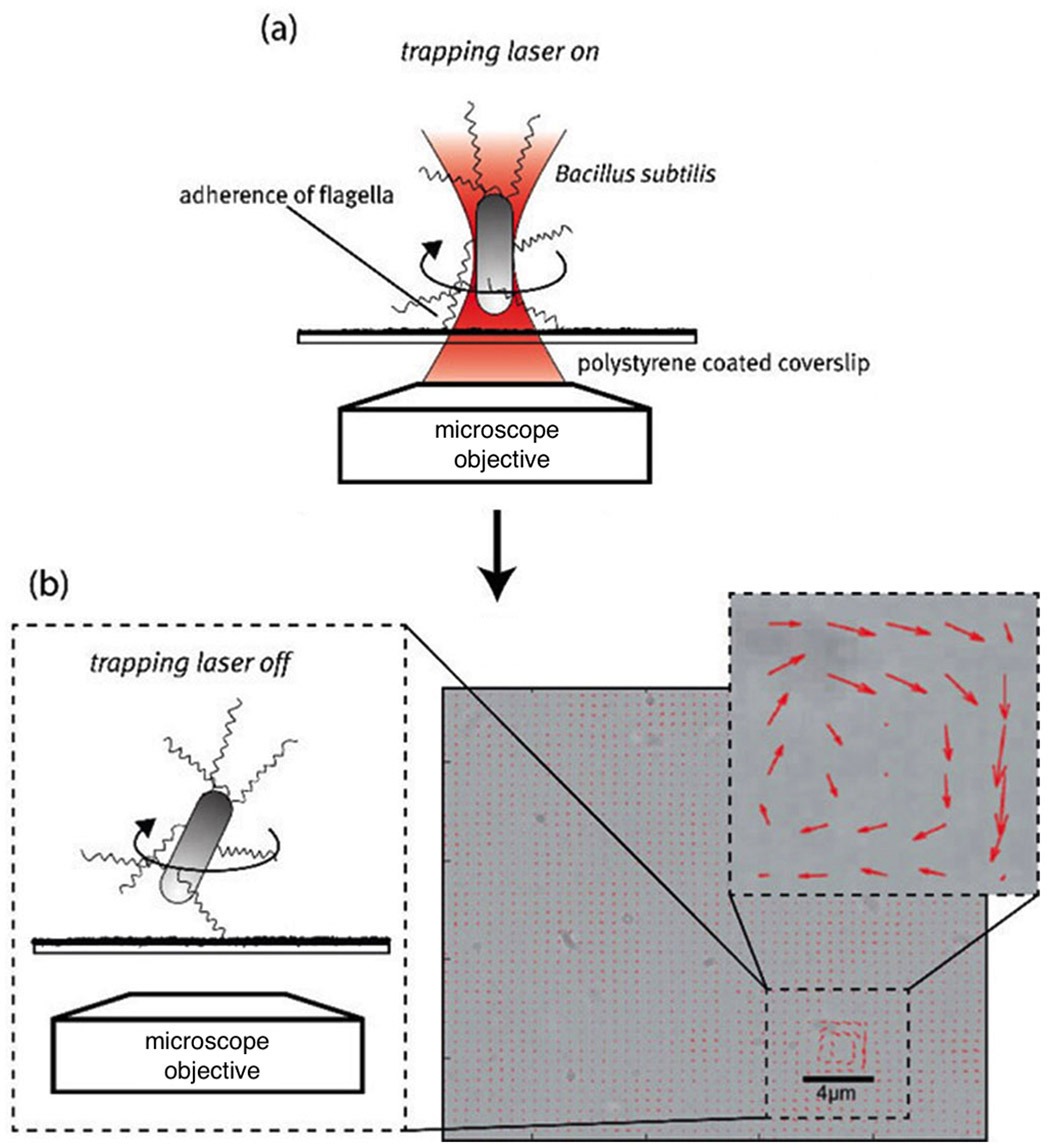 Figure 1. (a) Schematic of the adhesion process of a self-propelling bacterium on a coated surface based on a holographic optical tweezer (HOT). (b) Bright-field image of multiple B. subtilis attached to a coated surface. Red arrows superimposed on the image indicate the flow of the surrounding fluid resulting from bacterial actuation.

We further applied the HOT's ability to dynamically control and arrange tens of nonspherical particles in any desired configuration to assemble biohybrid microrobots consisting of a single self-propelling bacterium and a single payload particle (see Figure 2).4 With the idea of performing designed biomedical tasks, we chose zeolite L nanocontainers, which are suitable for functional biohybrid microrobots, to model the abiotic (i.e., nonliving) particle. One of their main features is that the interior of their nanochannels can be loaded with drug molecules or luminescent dyes for imaging and labeling biological cells, while the outer surface can be chemically modified to allow assembly and targeting of the bacteria.5,6 The propulsion of the optically assembled microrobot shows the potential of the proposed method as a powerful strategy for fabricating biohybrid microrobots, which could be envisioned as transport vehicles for drug delivery to otherwise inaccessible places. 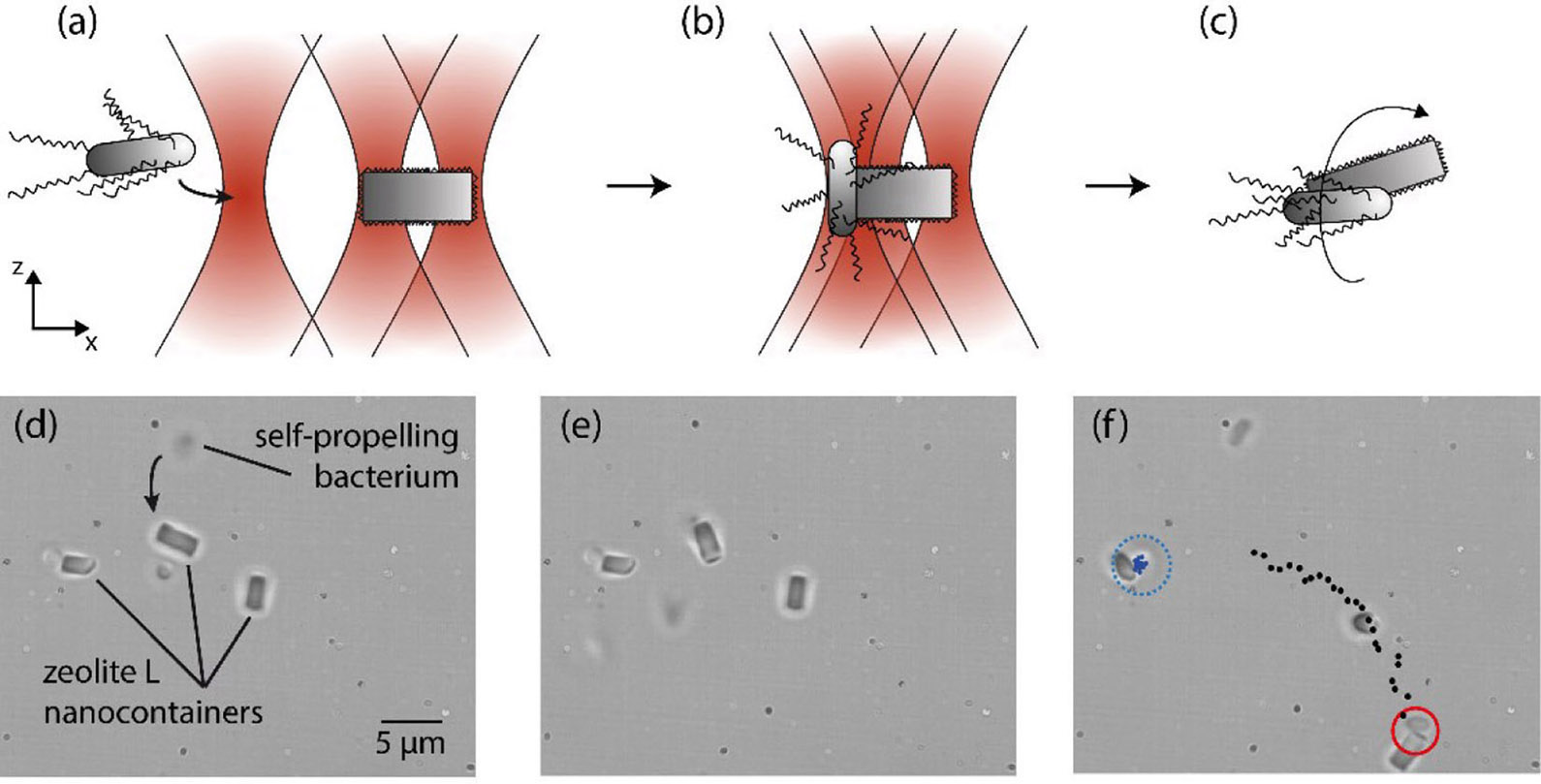 Figure 2. (a–b) Schematic and (d–e) corresponding experimental microscopy images of the assembly of a single B. subtilis bacterium and a zeolite L nanocontainer. (c, f) The subsequent self-propulsion of the biohybrid microrobot through the medium when the trapping laser is turned off.

In summary, we have demonstrated that contactless and spatiotemporal controlled optical assembly based on advanced holographic optical manipulation techniques paves the way to custom-designed biohybrid micromachines. Moving forward, we aim to use functionalized nanocontainers with biomolecules that are known for interaction with cell surfaces. This will open up future possibilities for fabricating biomedical microrobotic systems.

Cornelia Denz is director of the IAP. Her main research interests are nonlinear optics and photonics. She has authored more than 200 papers and three books. She is a fellow of both the European Optical Society and the Optical Society of America.