The standard carbon electrode (SCE) is a planar glassy electrode based on amorphous carbon arranged in the sp3 configuration, where the atoms form tetrahedra. The SCE is used in many electrochemical applications because of the formation of a chemical boundary layer in reduction and oxidation reactions, leading to diffusion of the reaction products. However, the SCE does not have a large enough surface area to enable high reaction rates in some catalytic processes. It would be advantageous to have an electrode that is similar in size to the diffusion distance of molecules in a reaction, as this would increase the mass transport of reactants. Furthermore, we cannot use sp3-bonded electrodes in some sensing processes that are possible when carbon atoms are arranged in the sp2 configuration, in which the atoms form flat sheets, as in graphene and carbon nanotubes. For example, with a 3D graphene electrode we can simultaneously detect dopamine, uric acid, and ascorbic acid. Thus, by producing an sp2 carbon electrode with a large surface area on a micrometer scale we could extend the use of carbon electrodes to a wider range of electrochemical applications.

Several research groups have converted 3D nickel foams, which have 3D pores on the hundred-micrometer scale, into 3D graphene by conformally depositing carbon via chemical vapor deposition and annealing the structure.1, 2 The foam chemically templates the formation of sp2-bonded carbon on the surface of a nickel scaffold and can then be etched away, leaving a free-standing 3D graphene lattice. Because the nickel foam is created electrochemically, its geometry is randomly determined with little control over the size and spacing of its pores, which makes it hard to design a graphene electrode on the same scale as the molecular diffusion distance.

We can overcome this problem using interferometrically defined 3D scaffolds, where the geometry of the scaffold is controlled by varying its exposure to radiation. The specific patterning technique we use is interferometric lithography, in which coherent plane waves undergo interference in space to generate a 2D fringe pattern. If we use a UV laser, the fringe pattern can expose a photoresist. Depending on the number of exposures and the rotation between each exposure, we can produce a 1D, 2D, or 3D photoresist pattern after development.3 We can form a face-centered cubic structure by three successive periods of exposure to two beams that are tilted with respect to a line perpendicular to the substrate, with the substrate rotated by 120 degrees between each exposure: see Figure 1. We then heat the resist pattern—see Figure 2(A)—to at least 1000°C in flowing forming gas (5% hydrogen, 95% nitrogen). Non-carbon species in the resist are volatilized and boil off, while the carbon remains behind. The photoresist pattern shrinks significantly, but the basic morphology remains intact, resulting in a 3D network of sp3-bonded carbon with micrometer-scale pores: see Figure 2(B).4 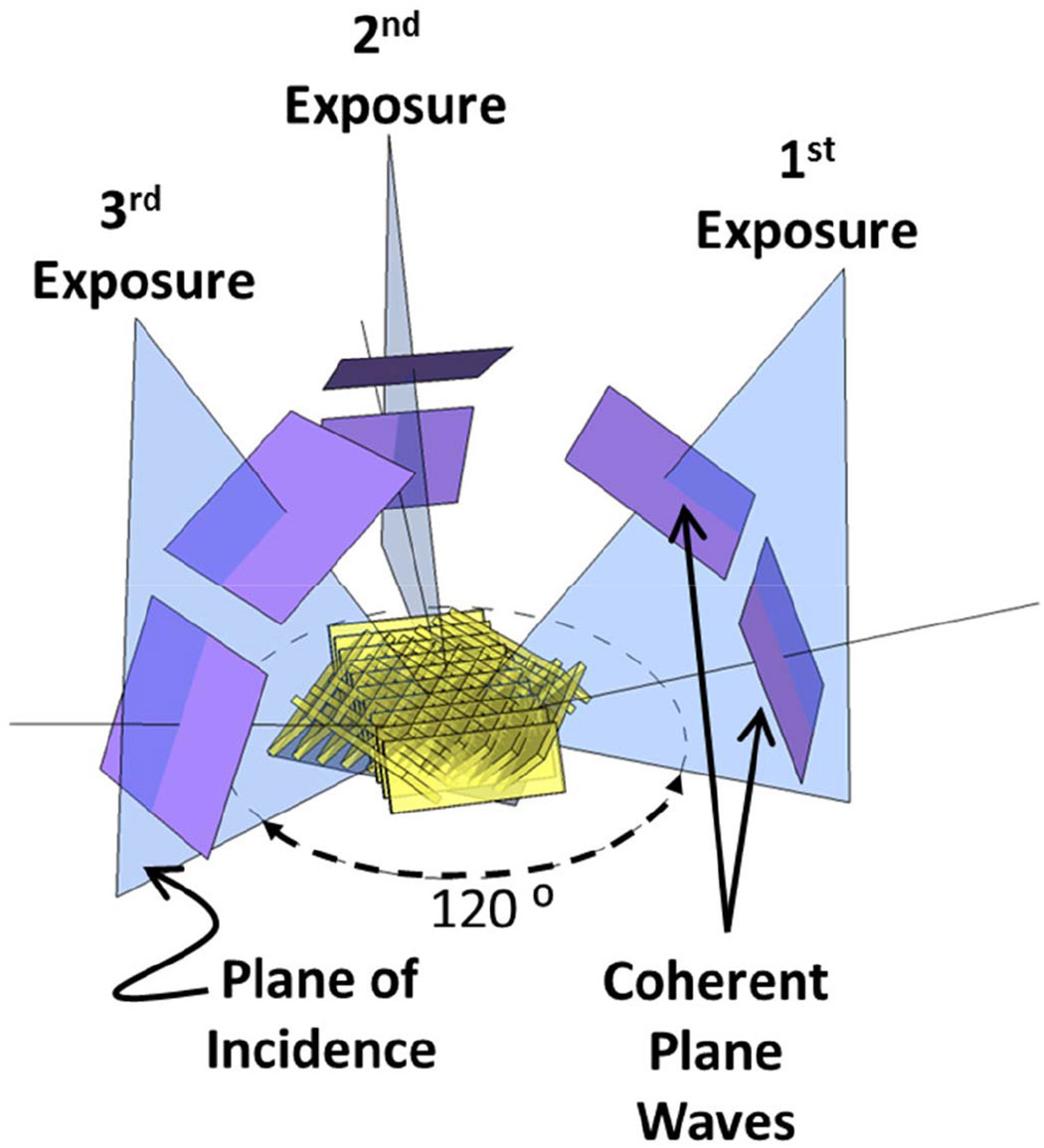 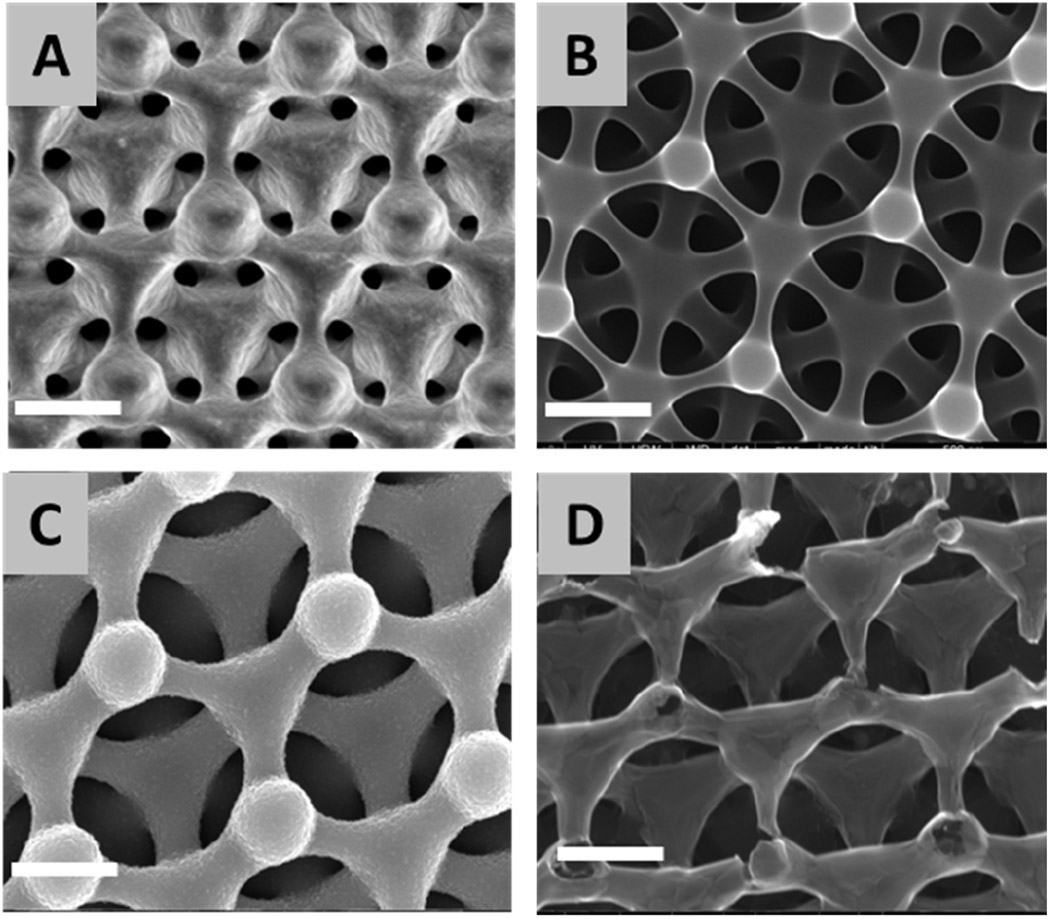 To convert this amorphous carbon scaffold into sp2-bonded carbon, we form a conformal coating of nickel on the scaffold by sputtering, as in Figure 2(C). After annealing, carbon diffuses through the nickel coating and, surprisingly, nickel and carbon completely switch places, forming a hollow 3D nickel–carbon scaffold.5, 6 The formation of sp2-bonded carbon can be confirmed via x-ray spectroscopy and micro-Raman scans: see Figure 2(D).

The proven potential of 3D graphene electrodes to increase reaction rates and mass transport in electrochemical reactions can be further enhanced both before and after pyrolytic treatment. In further research, we could dramatically increase the electrode surface area by incorporating nanoscale pores in the existing micrometer-scale porous structure using sacrificial nanoparticles in the resist stage. We could also potentially produce multifunctional scaffolds by heterogeneously decorating scaffolds with functional nanoparticles.

Supported by the Laboratory Directed Research and Development Program at Sandia National Laboratories, a multi-program laboratory managed and operated by Sandia Corporation, a wholly owned subsidiary of Lockheed Martin Corporation, for the US Department of Energy's National Nuclear Security Administration under contract DE-AC04-94AL85000.