Combining photovoltaics and concentrating solar power may enable the integration of low-cost thermal energy storage for the renewables-driven grid of the future.
26 August 2015
Matt Orosz

The world's first solar power plant was designed by American engineer Frank Shuman and commissioned in 1913 in Maadi, Egypt. This plant used five parabolic trough collectors (PTCs), each 62m long and 4m wide, to concentrate the sun's rays on a boiler tube that supplied a 75kW atmospheric steam engine coupled to a water pump capable of lifting 22m3 of water per minute.1 Although this plant was never fully exploited due to the onset of World War I and the widespread availability of cheap oil, a hundred years later the concept lives on in modern concentrating solar power (CSP) plants. Starting with Solar Energy Generating Systems in California in the early 1990s, CSP installations today involve vast farms of mirrors that focus sunlight onto a tower or PTC absorber pipes to deliver high-temperature (>350°C) heat to high-pressure steam turbines. However, to date the total installed capacity of CSP is only about 4.5GW.2

In contrast, the silicon-based solar photovoltaic (PV) cell, which was first developed, with 4% efficiency, at Bell Labs in 1954, has expanded from the aerospace industry to the ubiquitous solar panel seen on rooftops across the globe, with 177GW installed capacity worth $80 billion per year.3 The explosive growth of PV since 1990 has largely been driven by a tenfold reduction in the costs of solar panels to under $1 per watt in 2015. It is therefore worth considering whether CSP has any continued role to play.

The two solar power technologies, solid-state PV and thermomechanical CSP, arise from different traditions in science and engineering. Practitioners in these fields generally work at different companies, attend separate academic and professional conferences, and develop competing projects. There are many differences in cost and performance between PV and CSP, one of which is the ease and economy of integrating thermal energy storage (TES) with CSP. At a basic level, TES is similar to storing hot soup in a thermos; the stored heat from TES can be used later to drive a steam turbine. In contrast, storing electricity in an electrochemical battery is technically complex and costly (around $200 per kWh). This is perhaps the major factor keeping CSP in the market in an era when PV can be installed for a lower cost per watt.

Although the most widely used figure of merit for utility-scale solar plants is the installed cost per watt, it is important to note that this easy-to-calculate number may not indicate the true cost of the system with respect to what is actually generated. The levelized cost of electricity (LCOE) provides a more appropriate comparison, but calculating the LCOE relies on projections of future production quantities and operation and maintenance costs. A simpler metric for comparing sites that are already up and running is the installed cost per average kWh production in one year. In an ideal world, cost per watt and cost per kWh/ year would correlate closely, removing the need for additional calculations. In practice, they can vary widely due to the type of technology, local conditions, and potential integration of storage (see Figure 1). 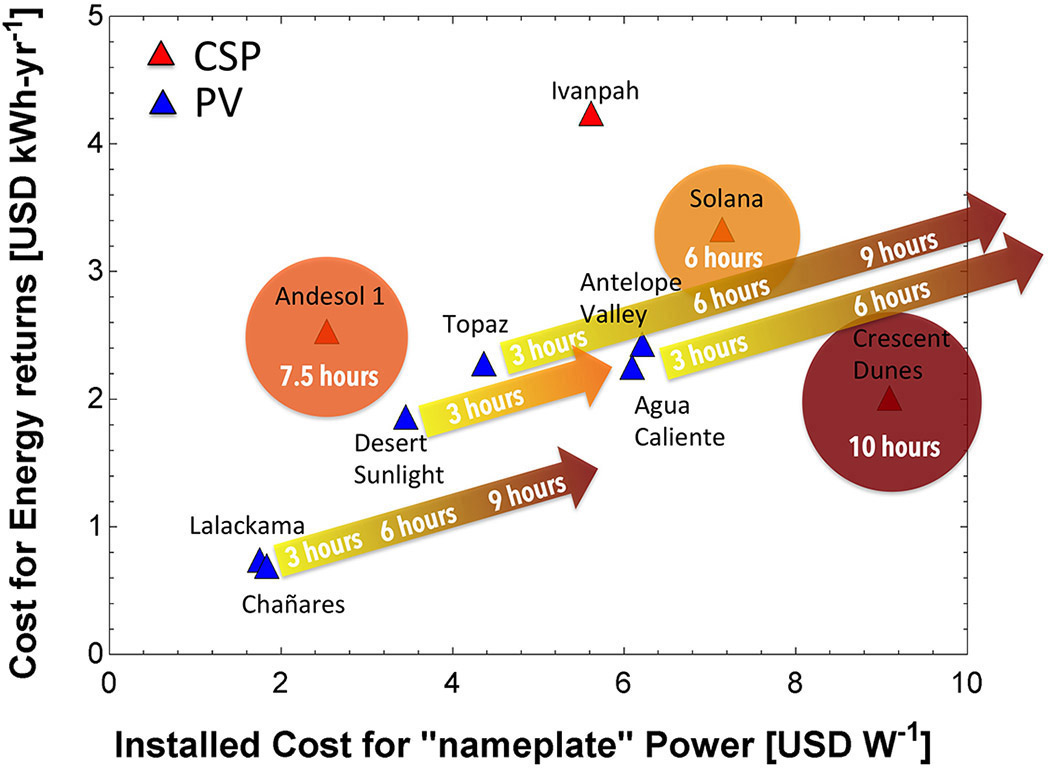 Figure 1. The cost of two types of solar power plant—concentrating solar power (CSP) and photovoltaic (PV)—according to two different metrics. The installed cost in dollars (USD) per watt for peak power (x-axis) is the more widely used metric, but the installed cost in dollars per kWh/year for annual generated energy (y-axis) gives a better indication of the actual value derived from the plant. The circles for selected CSP plants show the relative amount of thermal energy storage (TES) available. The arrows for selected PV plants indicate the additional installed cost for 3, 6, and 9 hours' storage using batteries (assuming an optimistic $150 per kWh with cycle lifetimes equivalent to TES). Adding battery storage to PV tends to make PV less economical than CSP combined with TES, whereas CSP without TES is suboptimal from an economic standpoint.

From Figure 1, we can conclude that CSP without TES cannot compete economically with other forms of solar utility. It is also apparent that adding electrochemical battery storage to PV plants more than outweighs the difference in cost between CSP and PV plants. If energy storage is required—and the question of storage looms large right now—the combination of CSP and TES often becomes more financially viable.

Utility operators value storage in their quest to maintain stable voltage and frequency across a grid where at any given time the amount of electrons flowing from dozens of generators into millions of homes is precisely balanced. Supplemental and spinning reserves that are able to effectively regulate grid quality while following the load are expensive to maintain. As more uncontrollable—from the perspective of grid operators—PV generation is added to electricity networks, the need for operating reserves and infrastructure for frequency response increases. California, which is a major market with abundant solar resources, has set a target of 33% of energy generated from renewables by 2020, yet the rate of renewables penetration that would cause instability in the grid may be as low as 25%, as suggested by the so-called duck curve. (This curve illustrates fluctuations in the demand for power over a 24-hour period and suggests that undersupply may occur in early evening peak hours as solar output tails off.) A potential solution is CSP with TES, but can CSP pin its survival on being a solution to a problem that is not well understood and will not happen outside California for many years? In 2015, according to the US Energy Information Administration, less than 5% of energy demand in the US is met from intermittent renewables: about 4.4% from wind and 0.5% from solar.4

To reduce the need for electrical storage and take advantage of the increasing efficiency and diminishing costs of PV, the US Department of Energy's Advanced Research Projects Agency–Energy (ARPA-E) has created the Full-Spectrum Optimized Conversion and Utilization of Sunlight (FOCUS) program to link PV and CSP.5 Several groups have responded to this challenge with innovative ideas: a team from Arizona State University is replacing traditional PTC mirrors with PV cells layered under an IR-reflective film that sends light to a traditional CSP absorber tube. At Cogenra Solar, we are keeping traditional PTC mirrors but interposing a secondary dichroic mirror in front of the CSP tube to reflect the visible part of the spectrum onto an additional receiver based on concentrated PV. Both these efforts attempt to split the solar spectrum to maximize the energy flux that corresponds to the PV band gap and avoid the temperature incompatibility between PV and CSP. As the temperature of a thermal receiver increases, the steam cycle's thermodynamic conversion to electricity increases. For PV cells, the opposite is true: higher temperatures reduce their efficiency and many of them are not built to withstand temperatures above 100°C. Another FOCUS participant, Microlink Devices, is aiming to reach PV cell operating temperatures of 400°C to enable the cells to be mounted directly on a CSP thermal receiver. Any of these techniques will result in more complex hardware, but they will probably still result in overall costs lower than those of either of the standard models. FOCUS promises to combine cheap direct generation via PV and cheap storage via TES, which could help stabilize a future grid that has significant penetration of renewables.

Meanwhile, combining PV with CSP could also find applications in another area where load following and energy storage are critical: community microgrids in emerging markets, particularly Africa. The advent of cheap PV has opened up the possibility of leapfrogging sluggish efforts to extend grids in regions where cellphone towers have superseded landlines. Although PV is making progress across Africa in the form of solar-powered LED lanterns and rooftop solar home systems (SHS), the amount of power these provide is low and the specific costs of energy are high: up to $2–5 per kWh.6 Hybrid PV–CSP could enable electricity to be produced at as little as one-tenth the cost of SHS by avoiding the use of expensive electrochemical batteries that need frequent replacement. Independent power producers (IPPs) can set up local distributed generation and distribution infrastructure, with daytime electricity produced cheaply by PV and nighttime power supplied from CSP-generated heat stored in TES. With grid-like metered service at mains AC voltage, there are enormous economic possibilities for small business growth as well as development implications for improved teaching and care at schools and health clinics in communities that are currently off-grid.

For example, at STG International we are developing hybrid PV–CSP microgrid designs and IPP operating strategies for use in rural areas in Lesotho (see Figure 2). We have been active in this area since 2006, including piloting micro-CSP plants (see Figure 3), and we are increasingly engaged with our partners in integrating PV and CSP and working to overcome barriers to bringing this technology onto the market. By adopting STG's scheme, which uses CSP and PV in their current commercially available forms rather than waiting for the results of FOCUS, a hybrid microgrid in a remote area could operate sustainably at a cost recovery tariff of about $0.25 per kWh.7 This is higher than the cost of grid electricity in most places but still affordable enough to meet the growing demand for solutions that go beyond standard solar PV. 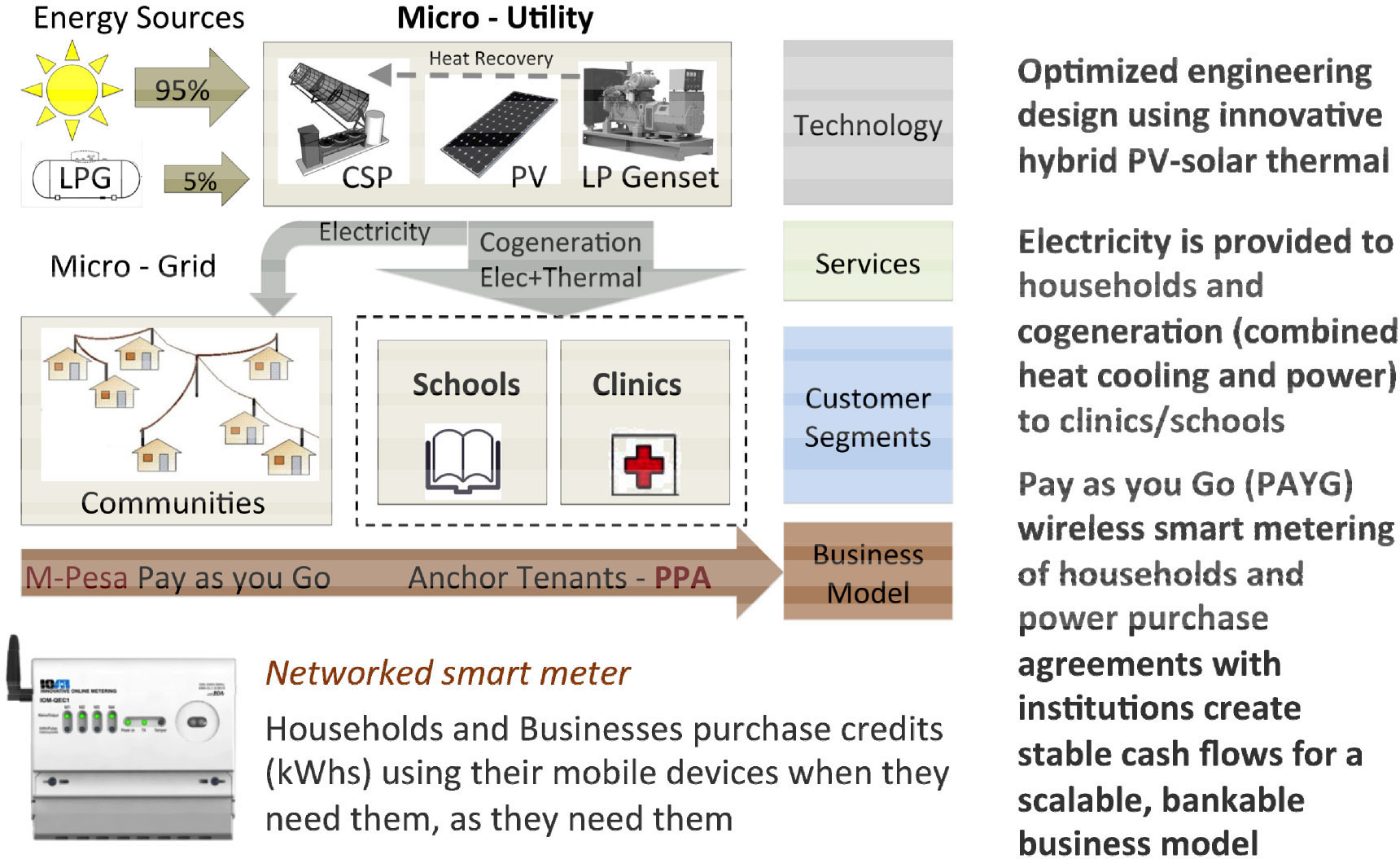 Figure 2. In this outline of how CSP and PV can be combined with microgrids to meet the energy needs of rural Africa, an independent power producer acting as a private-sector micro-utility can supply grid-quality power to institutional customers via a power purchasing agreement (PPA). Households are connected to a local distribution network via a smart meter, which shares data over a cellular network for automated transactions. Users can purchase prepaid units using mobile banking services such as M-Pesa. LP: Liquid petroleum. LPG: Liquid petroleum gas. 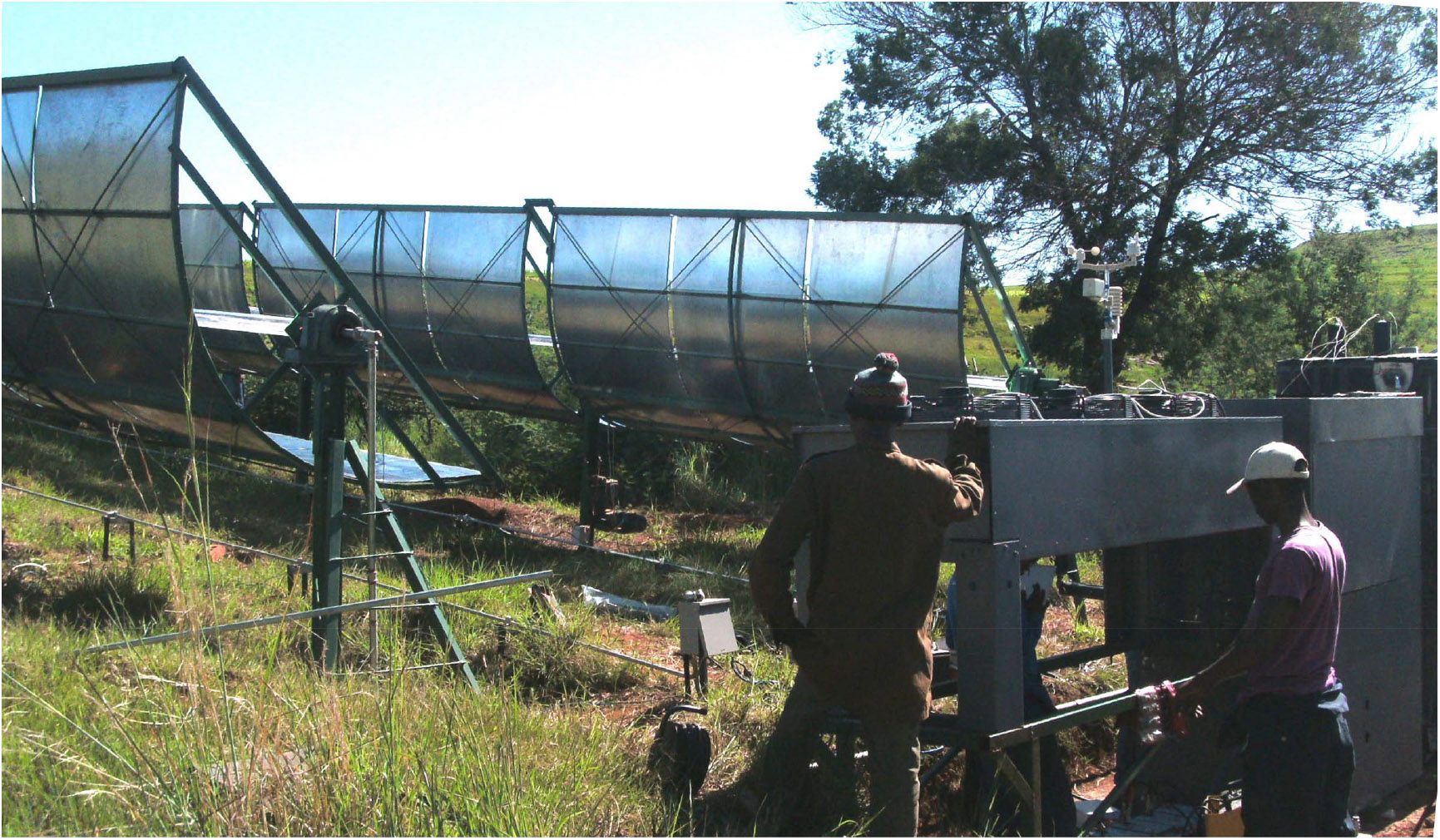 There are many challenges to be overcome before microgrids can be successful in Africa. In particular, financing for capital-intensive low-return infrastructure projects in markets that are perceived as risky will only become available when the technologies and business models are proven. Piloting and demonstrating these approaches requires a dedicated, collaborative effort on the part of funding agencies, governments, engineers, researchers, and community-based organizations.

A century after Shuman introduced solar power to the world, the future of CSP will depend on its ability to be combined with PV and thermal energy storage. In the US and other developed countries, this combination can add economical renewable power to the grid without exacerbating the problem of instability. In Africa, if the committed cooperation of government, society, and innovative research projects can be achieved, we believe this technology can make a massive contribution to meeting the continent's energy needs.

Matt Orosz holds a doctorate in civil and environmental engineering (2012), an MSc in technology and policy (2006), and an MEng in civil and environmental engineering (2003) from the Massachusetts Institute of Technology, as well as a BA in environmental studies (2000) from Dartmouth College. He is a co-principal investigator at Cogenra Solar and cofounder of STG International. Matt is a former Peace Corps volunteer and a Fulbright, Switzer, and Echoing Green Fellow.