Accurate and rapid IR metrology for the manufacture of freeform optics

The freeform revolution continues to redefine mainstream optics fields. Specific applications of freeform optics are currently prevented, however, because there is a lack of accurate metrology methods to guide efficient fabrication. The wide and flexible design space of freeform optics allows the design of new cutting-edge optical system concepts and form factors. Some next-generation astronomy telescopes use these systems to achieve improved performance. For instance, the Giant Magellan Telescope (GMT) combines multiple highly aspheric freeform primary mirror segments.1 A rapid precision manufacturing technology is thus one of the remaining pieces that prevents full realization of a freeform age, which will make complex tailored optics a tangible reality.

To achieve a rapid optics manufacturing process, it is highly desirable (because of the high material removal rate) to have precise surface figuring during the grinding phase. A surface error that requires one minute of grinding, for instance, can easily take more than 1000 minutes if it is removed during the polishing phase. Such grinding processes, however, are mostly limited by available metrology techniques. Current grinding phase metrology options include the use of a laser tracker2 or an IR interferometer, but these are often limited by coarse spatial resolution, low accuracy, or low dynamic range. Additionally the IR interferometer requires an expensive custom null IR optics system to measure freeform surfaces.

We have developed a new IR deflectometry (the deflection of light from a known source is measured, and the profile of the surface with which the light interacted is determined via back calculations) system (see Figure 1) that overcomes the limitations of existing metrology approaches.3, 4 We use deflectometry to make direct measurements of local slopes and rapidly provide highly accurate surface profiles of optical surfaces. In our Scanning Long-wave Optical Test System (SLOTS), we use a scanning thermal long-wave IR (LWIR) source to produce a 7–14μm spectrum that is reflected efficiently by rough optical surfaces. We are able to use SLOTS to produce accurate surface maps of ground freeform optics that have a surface roughness of about 0.7–1.6μm root mean square (RMS). In addition, we can achieve an accuracy of nearly 1μm with high spatial resolution (400×400 pixels) and a large dynamic range (e.g., 9mm freeform departure over a test surface with a diameter of 4.2m). The fast scanning capability of SLOTS also means that the total measurement time is short, e.g., an entire 4.2m-diameter test surface can be measured in less than a minute. 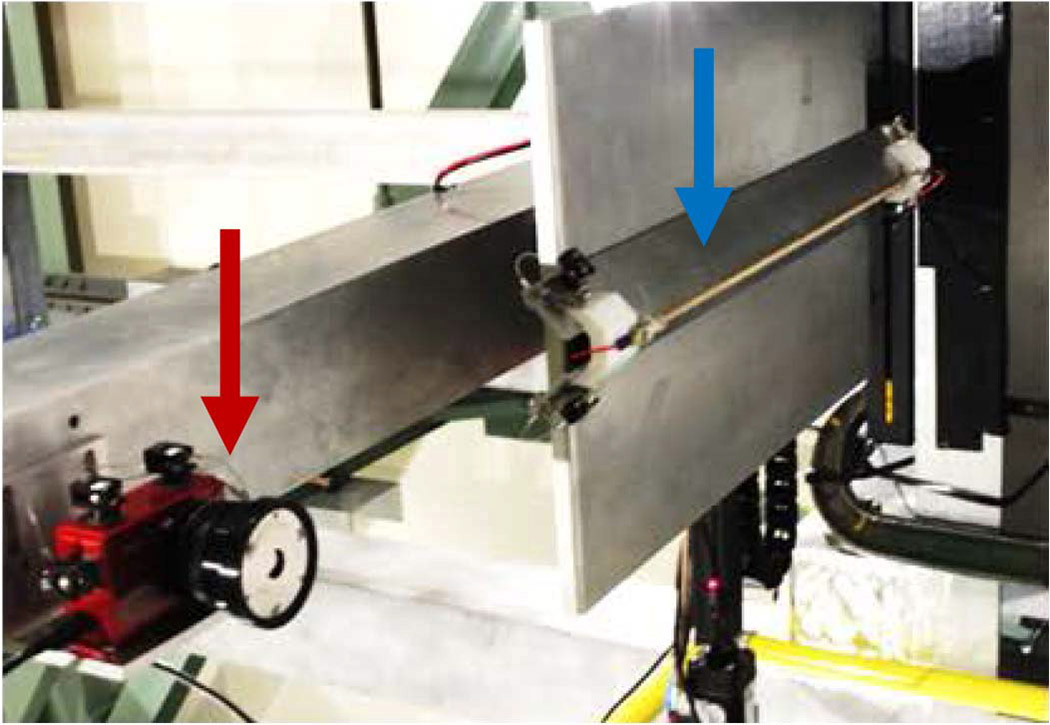 A schematic diagram illustrating our SLOTS deflectometry concept is shown in Figure 2. First, a tungsten ribbon (at 300°C) is scanned and emits LWIR radiation in two orthogonal directions.3, 4 Some of the rays from the ribbon are reflected by the test surface and propagate toward the LWIR camera aperture. We configure this camera to image the test surface plane so that each camera pixel corresponds to a local test surface area. We match the temporal position of the ribbon and the temporal intensity change of the thermal image during a scan. We are therefore able to directly calculate—based on a simple ray-trace (i.e., the solid red lines in Figure 2)—the local slopes of the test surface, and we integrate these to obtain the surface height. A sequence of four camera images that we captured during a continuous scan is shown in Figure 3. As the hot tungsten ribbon is scanned, only some areas (which appear bright in each image) on the test surface have local slopes that reflect LWIR light so that it passes through the camera aperture and on to the detector. 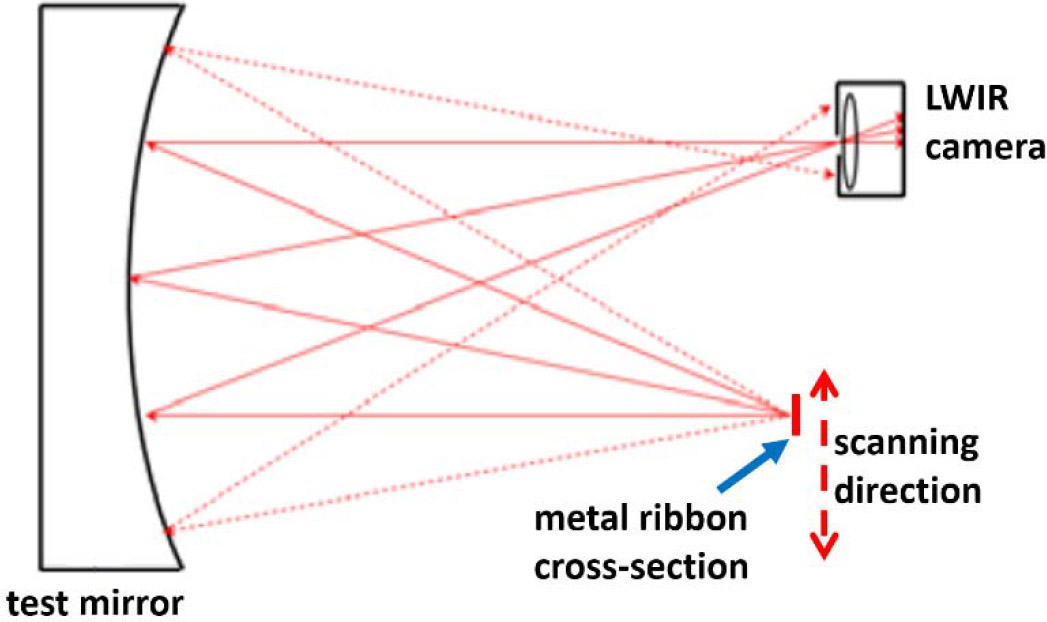 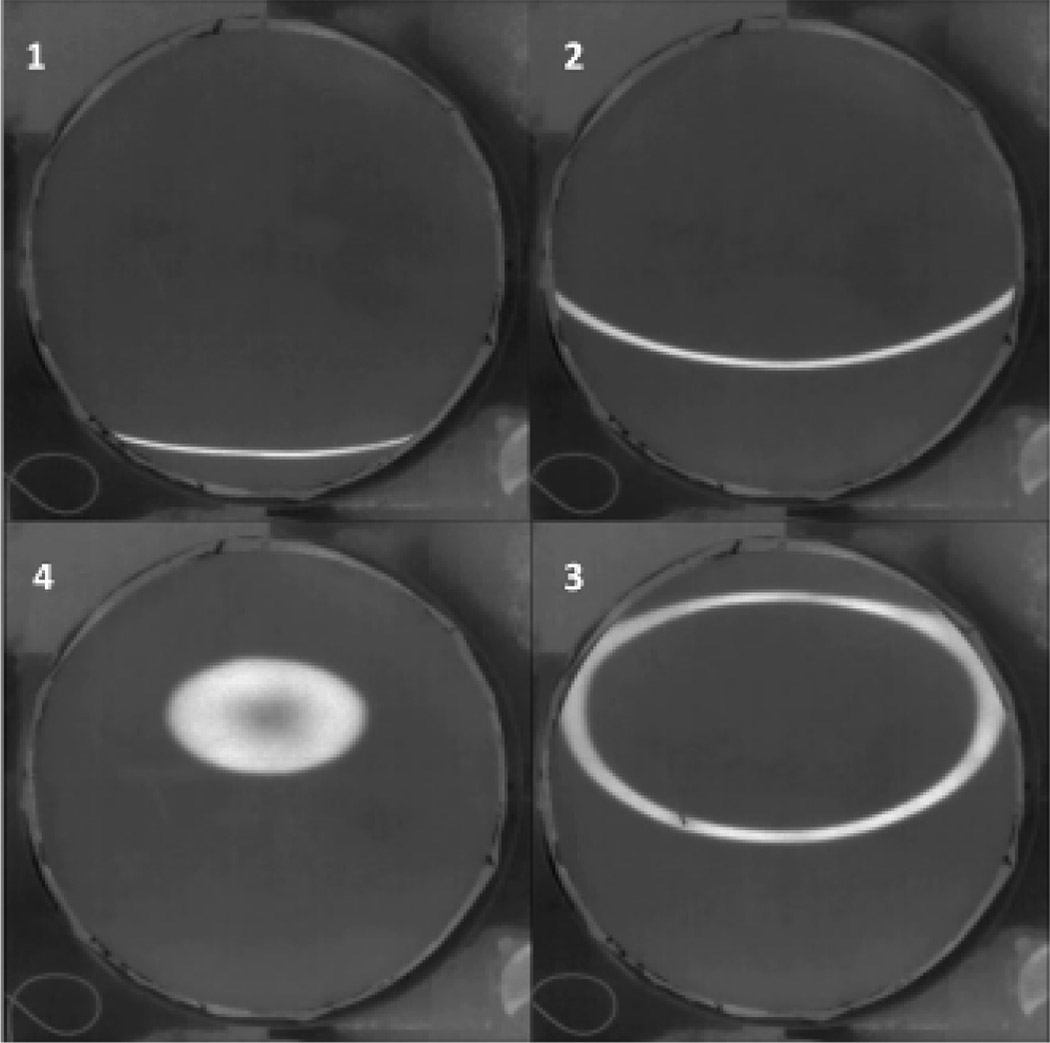 Figure 3. Four images captured using the LWIR camera during a SLOTS scanning process. Bright areas have local slopes that reflect LWIR light so that it passes through the camera aperture and on to the detector. (Watch a short video of this sequence.5)

We have successfully used SLOTS to guide the grinding of the 4.2m-diameter primary mirror for the Daniel K. Inouye Solar Telescope (DKIST), which is shown in Figure 4.3,6,7 This off-axis parabolic primary mirror has a freeform departure—see Figure 5(a)—of about 9mm maximum deviation. We have also calculated the higher-order shape departure that remains after subtracting the first eight standard Zernike terms: see Figure 5(b).

In addition, we have performed deterministic fine grinding runs—using 25μm loose abrasive grits—which were based on SLOTS data. The evolution of the DKIST primary mirror surface error (from its ideal shape) that we measured with SLOTS is presented in Figure 6. During three successive runs (about 97 hours in total), we targeted the high-resolution initial error map that pinpoints all the critical mid-to-high spatial frequency errors (e.g., edge shape). We were able to improve the RMS surface shape error from 15 to 2μm.6 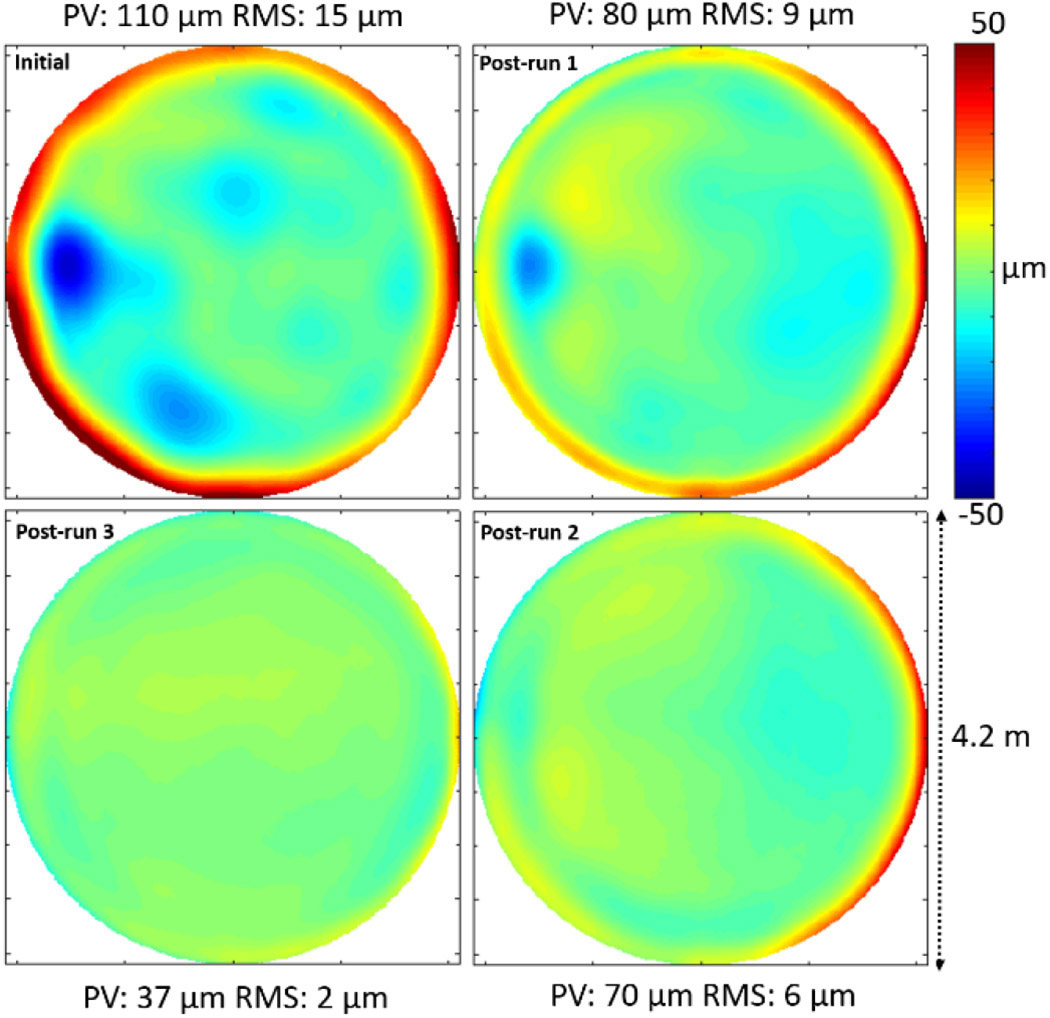 Figure 6. Illustration of the rapid evolution of DKIST primary mirror surface shape errors (from the ideal shape). These measurements were obtained during three successive computer-controlled fine-grinding runs, which had a total run time of about 97 hours.

Our new IR deflectometry system—known as SLOTS—represents an accurate method for rapid metrology of finely ground freeform optical surfaces. SLOTS now provides an opportunity to use ambitious and aggressive computer-controlled optical surfacing (CCOS) processes during early optics grinding phases. Our tests have shown the rapid convergence of the DKIST primary mirror during the grinding phase. This indicates that coupling CCOS processes with our new metrology system can lead to substantial reduction in freeform fabrication times. We are now planning to use SLOTS for various future astronomical optics manufacturing projects (e.g., for the GMT off-axis segments). We also hope to use SLOTS to guide the manufacturing of other freeform optics components that have rough surface finishes (e.g., for additive 3D printing technologies).

This material is partly based on work performed for DKIST. DKIST is managed by the National Solar Observatory, which is operated by the Association of Universities for Research in Astronomy Inc. under a cooperative agreement with the National Science Foundation.

Dae Wook Kim is an optical scientist. He received his BSc in physics and astronomy from Yonsei University, South Korea, and his PhD in optical sciences from the University of Arizona. He has served as associate editor of Optics Express and as an SPIE conference chair for Optical Manufacturing and Testing.