Fabricating triiodide methylammonium triiodideplumbate (CH3NH3PbI3) perovskite—an absorber with a high PCE—starts with methylammonium iodide (CH3NH3I, or MAI) and lead(II) chloride (PbCl2) as mixed precursors in a 3:1 molar ratio (hereafter referred to as 3MAI:PbCl2) for the following conversion reaction1 (the intermediate phase during the reaction is omitted here):

During the reaction, the chloride compound methylamine hydrochloride (2CH3NH3Cl, or MACl) is generated as a byproduct. We have found that MACl plays a critical role in CH3NH3PbI3 perovskite film formation, adversely affecting the performance and stability of the final PV device.2 To obtain compact and pore-free perovskite films, we introduced a vacuum-assisted thermal annealing (VATA) approach to control the removal of the MACl byproduct.

Thermal annealing in the vacuum facilitated the escape of MACl from the film at a certain rate, enabling the perovskite crystallization process and growing a compact, pore-free, and improved crystallite structure at 60°C in a vacuum: see Figure 1(a) and (b). Humidity heavily influences the crystallization rate of the perovskite film formation, and our vacuum and non-vacuum devices reduce it to less than 1ppm. As an example, when we add 3% H2O (by weight) to the perovskite precursor solution, the crystallization time at 60°C in the glove box increases to ∼10 hours. Because of its high sublimation point (i.e., phase transition to gas) of about 200°C, 3 the release of MACl can happen at an annealing temperature higher than ∼170°C.3 We deduced that the MACl released from the film can be in the form of gas phase methylamine (MA) and hydrogen chloride (HCl), and that these can recombine to form solid-state MACl. The solvent (H2O, for example) retains these molecules, making the escape of MACl harder than in the moisture-free samples. 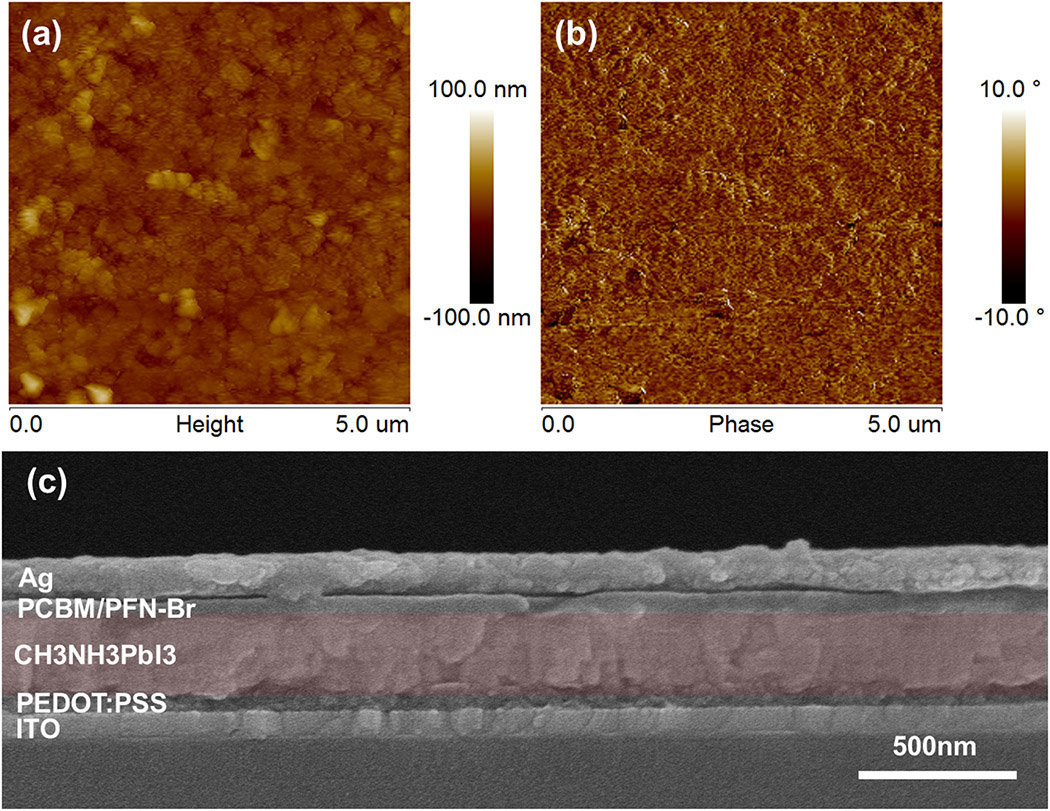 To demonstrate that the pore-free CH3NH3PbI3 film would be an efficient and stable light harvester for solar cells, we fabricated PV cells with typical organic semiconductors4, 5 as selective electron- and hole-extracting materials, as shown in Figure 1(c). The embodiment was indium tin oxide (ITO)/ poly(3,4-ethylenedioxythiophene):polystyrenesulfonate (PEDOT:PSS, 50nm)/ CH3NH3PbI3/6,6-phenyl-C61-butyric acid methyl ester (PCBM, 50nm)/poly(9,9-bis(3'-(N,N-dimethyl)-N-ethylammonium-propyl-2,7-fluorene)-alt-2,7-(9,9-dioctyl fluorene))dibromide/silver (100nm). The most efficient devices employing a perovskite film with a thickness of 300nm are formed from a 3MAI:PbCl2 solution with a concentration of 50% by weight, applying a spin rate between 2000 and 2500rpm, and with VATA at 60°C. The efficiency of the forward scan (14.3%) deviated only slightly from that of the reverse scan (14.75%), averaging 14.52%.

We observed very poor stability for the sample that had MACl residue. The perovskite film turns yellow when it is exposed to air for several hours—see Figure 2(b)—presumably due to a small amount of MACl absorbing water, which subsequently decomposes the CH3NH3PbI3crystallites. The devices featuring MACl-containing perovskite absorbers also degrade quickly in less than two hours: see Figure 2(b). In contrast, there was almost no color change for the pore-free films in the ‘no MACl residue’ sample, even after exposure to air for more than one month: see Figure 2(b). We designed a more stable perovskite solar cell—see Figure 1(c)—using PCBM as an acid inert interface layer and silver as an electrode, which can impede halide corrosion. As revealed in Figure 2(b), the device performance remained stable after 10 hours of continuous illumination, confirming that we can achieve greatly improved stability with an excellent design structure and the total removal of MACl.

In conclusion, precise control over the composition and morphology of perovskite thin films produced from 3MAI:PbCl2 is possible using vacuum-assisted annealing, which promotes the removal of MACl. This results in pure, pore-free, finely crystallized triiodide CH3NH3PbI3films from a one-step solution deposition approach. Using this method, we can obtain highly efficient solar cells (PCE: 14.52%) with very high reproducibility and long-term stability, and we anticipate that our findings will enable further improvements in the performance of the perovskite PV family. As a next step, we would like to improve the efficiency of the perovskite solar cell in two ways: by modifying the interface layer between the perovskite layer and the electrode, and by improving the light absorption of the device.

Fengxian Xie received her PhD from the Department of Electrical and Electronic Engineering, where she is now a postdoctoral fellow.

Wallace C. H. Choy received his PhD in electronic engineering from the University of Surrey, UK. He subsequently worked at the National Research Council of Canada, and then joined Fujitsu in San Jose, California. He is now an associate professor in the Department of Electrical and Electronic Engineering.